Planets and space events distract most stargazers away from the wonderful world of moons. These satellites have a life of their own. Far from being dead rocks, moons can be lethal and make music. Some are not even solid.

It is not just their unique features and abilities that tell astronomers more about space but also their absence. In recent years, several intriguing old mysteries about our own Moon have also been solved. 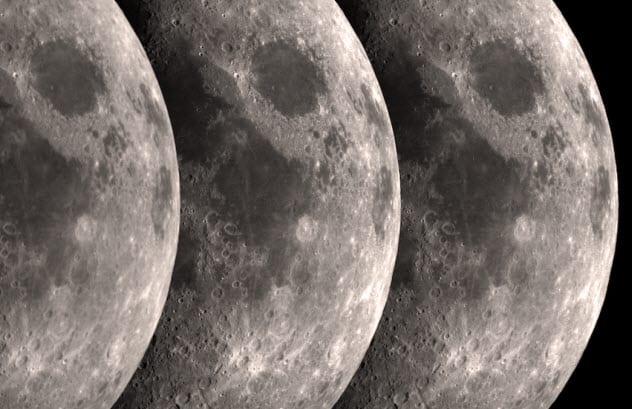 An unusual study posed a question so obvious that it is surprising that nobody asked this before. Can a moon have a moon?

There are no such submoons in our solar system, but the notion produced interesting results and names. Suggested terms for these missing bodies included moonmoons, moonettes, moonitos, and moooons. Whatever scientists end up calling them, their absence could fill in a few blanks about moon formation and the Earth’s solar system.

The 2018 study found that submoons had it tough. Tidal forces and a lack of orbiting space would end up destroying the mini moon. There are also factors that could help it survive—being really small while orbiting a really big parent moon. The latter must not be too close to the host planet and have enough gravity to keep the baby moon in place.[1]

It also remains a mystery why several moons in the solar system qualify but have no minions. If scientists can answer that one, it might add valuable pieces to understanding celestial formations during the earlier stages of the solar system. 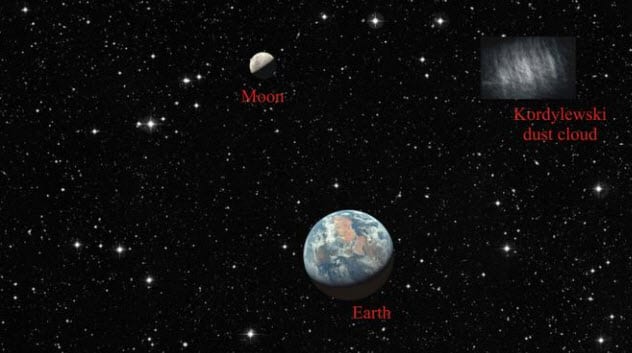 Over 50 years ago, a big scientific controversy began. Theoretically, there are gravitational points between Earth and the Moon where objects can remain stable. The most likely kind of bodies predicted were “dust moons.” Technically called the Kordylewski dust cloud, scientists have argued over its existence for decades.

In 2018, the first signs appeared that something was orbiting Earthlike moons. The initial step involved computer simulations to understand the cloud’s formation and how it scattered light. This ability to reflect light gave researchers the first real chance to detect the elusive dust.

A digital camera was adapted with special filters and installed at an observatory in Hungary. The images revealed the strongest evidence yet that Earth had satellites other than the Moon. Even better for scientists, the snaps picked up on not one but two Kordylewski cloud “moons.”[2] 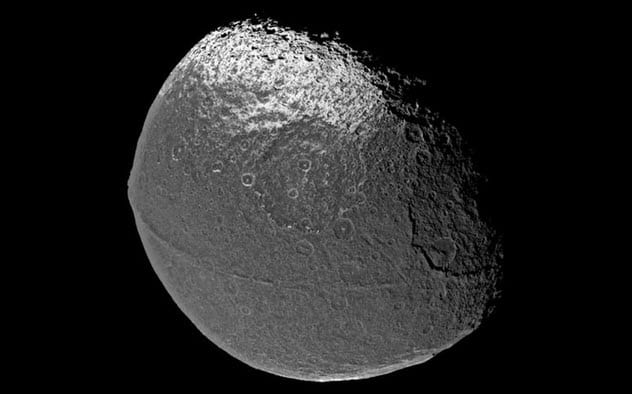 One of Saturn’s moons looks like a walnut. Along the equator of Iapetus snakes a line of peaks that gives the moon an unusual ridge. This feature is unique in the solar system and a complete mystery.

Recently, new simulations suggested that Iapetus once had its own ring, similar to those of Saturn. This theory fits the formation of the lunar range. At one point, the massive ring collapsed and fell to the moon’s surface. This was not a single event but rather several waves of material that rained down on the equator.

The model showed that if the first objects came in slowly and at a low angle, they would have skidded through the Moon’s icy crust and left deep tracks. Subsequent debris followed along the same path, piled up, and resulted in peaks reaching up to 20 kilometers (12.4 mi) high.[3]

As mountain ranges go, it might not be the biggest. However, when measured in relation to the size of the world to which it belongs, the ridge is the largest range in the solar system. 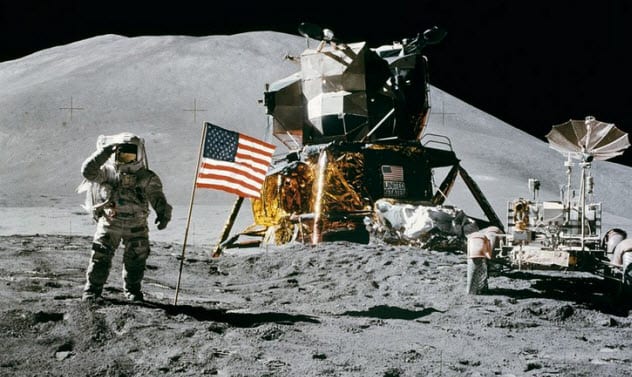 In the 1970s, the first astronauts bounced over the lunar surface and made history. Then something strange happened. After the Apollo crews departed, the lunar temperature spiked by almost 2 degrees Celsius (3.6 °F).

For decades, this mystified NASA scientists. A dedicated team took eight years to track down 400 missing NASA tapes and to find and analyze temperature readings from mission logs that had been archived long ago. They studied the data, including photographs of where the men had walked.

In 2018, the results were released and revealed that the first 12 astronauts disturbed enough lunar dust to expose swaths of raw surface. They had been protected for billions of years by the dusty layer. But it took just six years for the scuffed spots to absorb enough solar radiation to raise the entire Moon’s surface temperature.

The temperature probes originally planted by the astronauts also confirmed that the heat started at the surface and not from inside the Moon. This fact was not known until the missing tapes were recovered and analyzed.[4] 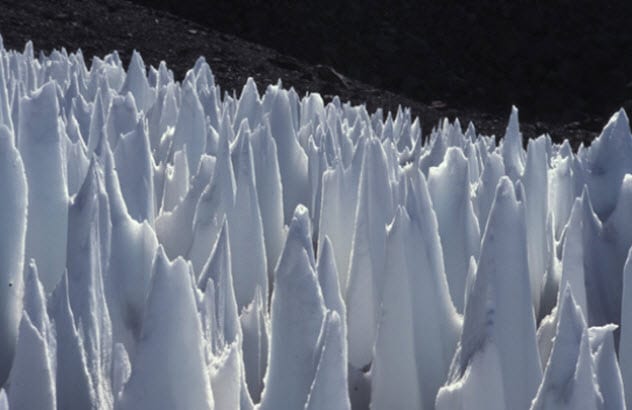 Jupiter’s moon, Europa, holds an exciting lure for scientists—a saltwater ocean possibly teeming with life. A lander is scheduled for the 2020s, but there is a chance that the craft could get impaled before it reaches the surface.

In 2018, researchers came to the conclusion that the region had a deadly feature—massive ice spikes, standing around 15 meters (50 ft) tall. There exists no image of these enormous formations, but solid clues backed up the researchers’ suspicious minds.

Europa’s landscape is similar to Earth’s high altitudes where ice blades often grow. Technically called penitentes, the spikes can reach up to 4 meters (13 ft) high on Earth. Solar heat whittles away at ice sheets, and penitentes form when ice evaporates into gas instead of melting.

These conditions exist on Europa but are extreme enough to carve building-sized versions. The discovery could answer an old mystery. Past radar beams bounced off this moon’s surface but not before touching an even number of surfaces.[5]

No explanation fit until Europa’s penitentes came along. When radar wavelengths are smaller than the spaces between the towers, they would very likely reflect an even number of times. 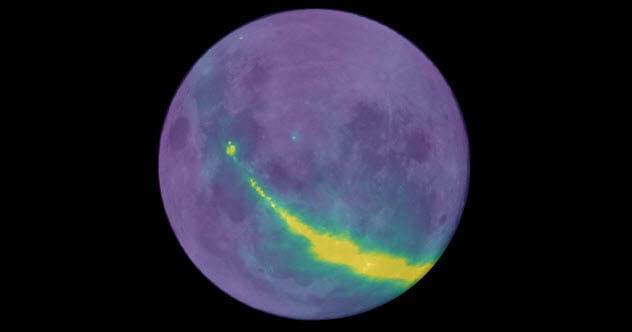 Earth’s Moon is doing something remarkable that could allow a glimpse at the early universe. In 2018, astronomers found that something other than sunlight was bouncing off the lunar surface—radio waves from our galaxy, the Milky Way.

This discovery could finally help to test theories about the universe’s evolution, a study usually hampered by the difficulties associated with radio waves. To learn more about the universe’s early days, scientists need to find the elusive signal emitted by the hydrogen from the period between the big bang and the Epoch of Reionization (EoR), when stars first formed.[6]

However, this faint hydrogen “sound” is obscured by a sky stacked with stronger radio signals. This is where the Moon can help. The satellite naturally blocks radio waves. If a radio telescope could be placed on the far side of the Moon, researchers could cut out most of the interference from Earth and listen for EoR.

Discovering the Moon’s reflective ability is a promising step toward detecting the primordial signature. 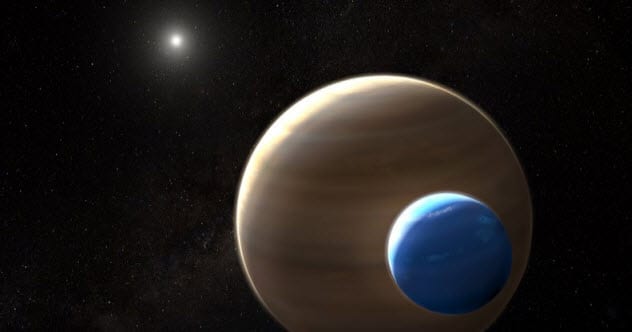 Moons are so abundant in our solar system that most people assume they also populate space elsewhere. The bizarre fact is that astronomers have found plenty of planets outside the solar system but not a single moon.

In 2017, the first exomoon candidate was found around 8,000 light-years away.[7] This science-changing discovery was given the name Kepler-1625b-i in honor of the exoplanet it orbited (Kepler-1625-b).

There are two strong indications of a moon. First, the gravity of something is tugging on the planet. Second, the planet’s sun occasionally dims more than it should as the moon orbits in front of it.

Other theories suggest that it could be noise from the star, but the sun is exceptionally quiet. It could also be a second planet, although the evidence is lacking. It appears to be a giant planet-moon system with unanticipated properties.

The planet is a Jupiter-sized gas giant. Calculations predict that the satellite would also be an enormous gas body, about as big as Neptune. If Kepler-1625b-i turns out to be a moon, it could change how astronomers look at lunar development, including how a large gassy moon is even possible. 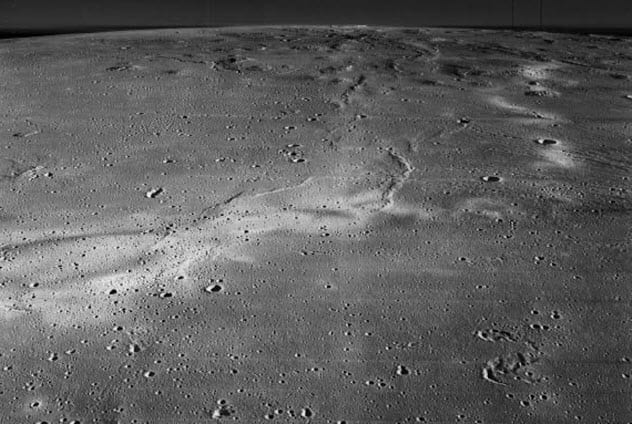 Our Moon has decorations few people know about. Stunning swirls, light and dark, curl inside each other like cream over the surface of a cappuccino. In 2018, the long-standing mystery was finally cracked. The swirls appeared in the same place as another mysterious feature—local magnetic fields.

The first step was to find out what produced the powerful magnetism. Mathematical models analyzed the fields and found that every swirl appeared over a narrow strip located underground. These strips are believed to be lava tubes.

About three billion years ago, the Moon erupted and it was likely during this time that the tubes formed. As they cooled down, they became intensely magnetic. Long before this study, researchers already knew that minerals inside Moon rocks become super magnetic when the conditions are right—extreme heat and no oxygen.[8]

In short, when lunar lava turned into rock, the fields were powerful enough to deflect solar particles in some areas. This weathered the landscape at different speeds and created the swirling patterns. 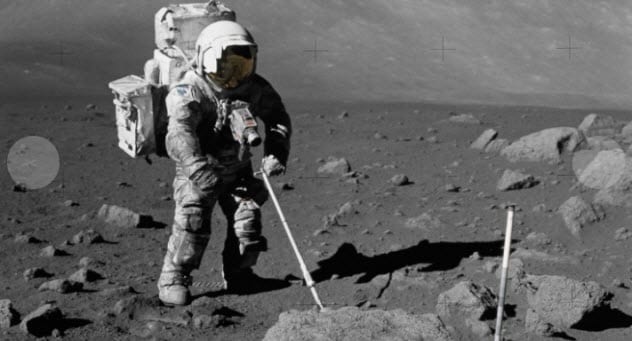 Future Moon tourists face several dangers when visiting Earth’s faithful satellite. There is the lack of oxygen and risking a body explosion should your suit get a puncture. However, one of NASA’s biggest headaches is Moon dust.

The particles cling to everything, including suits and shoes. When Apollo 17 astronaut Harrison Schmitt walked on the Moon in 1972, he inadvertently inhaled some dust. His symptoms earned the cute name of “lunar hay fever.”

In 2018, scientists determined that the reality of inhaling Moon dust was horrific. When it comes to the Moon, the word “dust” is a bit of a misnomer. It is not the powdery substance found on Earth. Lunar particles are sharp, never erode, and are made up mostly of meteorite pieces.

Authentic lunar soil is not easily obtainable, but NASA has a fake version that is as good as the real thing. When exposed to human cells in the laboratory, the dust—which is easy to inhale—sliced and destroyed up to 90 percent of lung and brain tissue within 24 hours.[9]

Frighteningly, the cells that survived had such bad DNA damage that they risked developing cancer and neurodegenerative diseases.

Sounds of Saturn: Hear Radio Emissions of the Planet and Its Moon Enceladus

Saturn is doing something exceptionally strange. The gas giant sings to one of its moons. Called Enceladus, Saturn’s sixth-largest moon is also its weirdest.

Prior research discovered that the icy orb forcefully uses its magnetic field to pluck at Saturn’s. This strumming originates from an enigmatic warm sea under the moon’s frozen crust. Sometimes, it shoots vapor into space where it tangles with Saturn’s ionosphere.

In 2017, researchers recorded the planet’s reaction for the first time. When the moon hums at Saturn, the ringed world sings back. The “song” is a column of plasma that vibrates as it travels, resembling air oscillations that help humans to hear.

This similarity gave scientists a bright idea. In a first-of-its-kind recording, they turned the plasma tremblings into a sound file. In reality, the waves are silent. But once converted, the result was spellbinding.[10]

A high keening produced an unearthly song that sounded a little sad. These days, it is called an “auroral hiss” because the plasma is cut from the same matter that makes Earth’s auroras.