In 2014, Ridley Scott unveiled his Biblical epic Exodus: Gods And Kings and accidentally opened a very old can of worms in the process. The film features white actors playing the ancient Egyptian characters, outraging those who firmly believe that the Egyptians were black. But exactly what did the ancient Egyptians look like?

SEE ALSO: 60 Stunning Images of The Middle East That Will Make You Forget Its Violent Past

Well, the answer is that nobody knows for sure. The majority of Egyptologists insist that it doesn’t matter at all, since there’s no reason to believe that the Egyptians shared our modern conception of race. To ask the ethnicity of the ancient Egyptians, they argue, is imposing a modern idea on a very old people. Still, there are some clues as to what the Egyptians might have looked like, although the only real conclusion is that we simply can’t be certain.

The Greek historian Herodotus, who wrote extensively about Egypt around 450 BC, was among the first to indirectly shed some light on the appearance of the ancient Egyptians. Writing over 100 years before Alexander the Great conquered Egypt, Herodotus argued that the inhabitants of Colchis (an area on the east coast of the Black Sea) were of Egyptian descent because, like the Egyptians, they had dark skin and woolly hair. Both groups also practiced circumcision and apparently wove linen in a similar way.

Herodotus’s short description has been the subject of endless debate. The exact words he uses are melanchroes (meaning having dark or black skin) and oulotriches (having woolly or curly hair). Some scholars believe that melanchroes could mean anyone with darker skin than Herodotus himself. Herodotus also notes that the Colchians physical appearance “proves nothing, since other peoples also have these traits,” which could imply that the Colchians didn’t look significantly different from other Asian peoples.

But while we don’t precisely know what Herodotus meant by melanchroes, it clearly implies they were darker than the Greeks, indicating that the Egyptians were probably not particularly light-skinned. 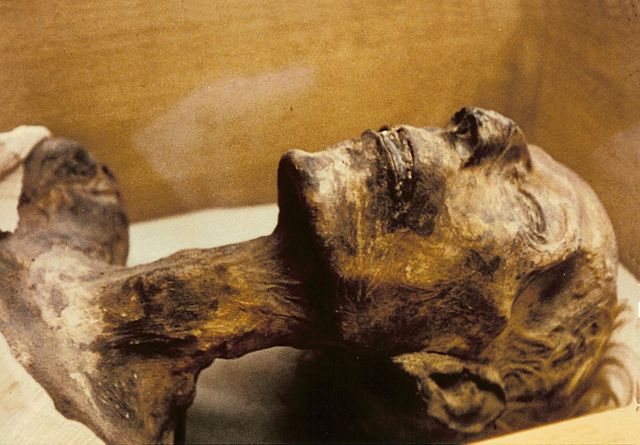 During the early 19th century, proponents of slavery and various other racists argued that ancient Egypt could only have been so advanced because it was a Caucasian civilization. They also speculated that the Egyptian ruling class was white while their slaves were black. Afrocentric historians, on the other hand, stress the sub-Saharan origins of Egyptian civilization, asserting that ancient Egyptians were black.

The truth seems to have been somewhere in between. In fact, it has been argued that ancient Egypt was something of an ancient melting pot—something that even extended to its monarchy. In 1881, the mummy of Ramesses II (an Egyptian pharaoh who ruled around 1279–1213 BC) was discovered. Nearly a century later, in 1974, archaeologists in Paris forensically examined the mummy. Their analysis indicated that he had red hair, a trait never found in sub-Saharan Africa. (Because Ramesses II was in his early nineties when he died, his white hair had been dyed red with henna, but microscopic analysis confirmed he was originally a redhead.) Because Ramesses was known to have been of Libyan descent, historians have speculated that he probably had relatively light skin, especially since ruling Egypt probably didn’t require him to go out in the sun much. 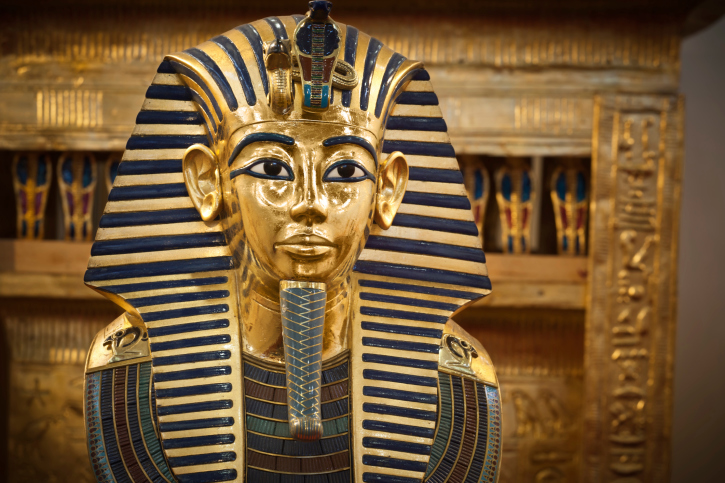 Modern portrayals of Tutankhamun, an Egyptian pharaoh who began his rule as a nine-year-old in the 1330s BC, are a source of contention. Some Afrocentric scholars claim that popular depictions of the pharaoh (popularly known as “King Tut”) as white are racist and egregiously inaccurate. Things became even more heated after Egyptian scientists sequenced Tut’s DNA.

While the people actually responsible for the study didn’t release any information about his race, various Neo-Nazi organizations seized on a blurry screenshot from a Discovery Channel documentary, which they insisted “proved” that Tutankhamun was white or even Nordic, since he supposedly belonged to a blood group common in European populations. Meanwhile, the Egyptian authorities were accused of trying to cover up Tut’s possible Jewish heritage due to the current tensions in the Middle East.

However, most actual genetic experts acknowledge that ancient DNA is incredibly easy to contaminate (in one famous case, DNA identified as belonging to a dinosaur turned out to be from a modern human), making any DNA study of King Tut highly suspect. 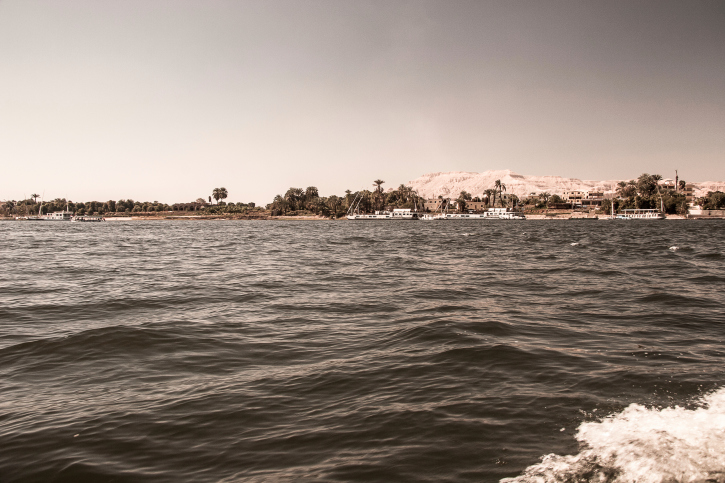 Most modern linguists favor the “black land” meaning of the word. They argue that the Nile River’s yearly floods brought rich black soil, which ensured the country’s agricultural prosperity. As a result, the Egyptians called their land Kmt. The black soil provided a sharp visual contrast with the desert sands around the Nile, which ancient Egyptians called dsrt (“the red land”). But only the parts of Egypt closest to the Nile would have flooded with the black soil, and the Egyptians did not have any vocabulary to refer to race, so perhaps neither argument is wholly correct. 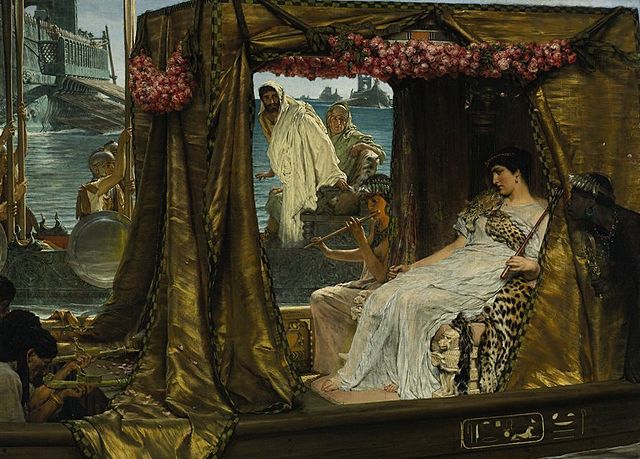 Of course, the famous Cleopatra wasn’t especially Egyptian, being descended from one of Alexander the Great’s generals. But what ethnicity was she? Most Egyptologists believe that she was a mixture of Macedonian Greek and Persian, but they don’t know for sure where her mother was from (or even who her mother was).

For political reasons, Cleopatra had Arsinoe IV, her half-sister (or full sister—they had the same father but may have had different mothers), murdered. Some scholars have asserted that Arsinoe IV was part-African, meaning that Cleopatra’s mother (and Cleopatra herself) could have been part-African as well. In the 1990s, an archaeologist claimed to have identified Arsinoe’s tomb and skeleton. However, DNA testing on the bones was inconclusive—and we’re still not even sure that they’re her bones. It seems likeliest that Cleopatra was generally Mediterranean, a mix of Greek and various other nationalities. Ultimately, most classicists dismiss the question of Cleopatra’s race, arguing that we shouldn’t focus on something as insignificant as skin color when we can focus on her great political accomplishments. 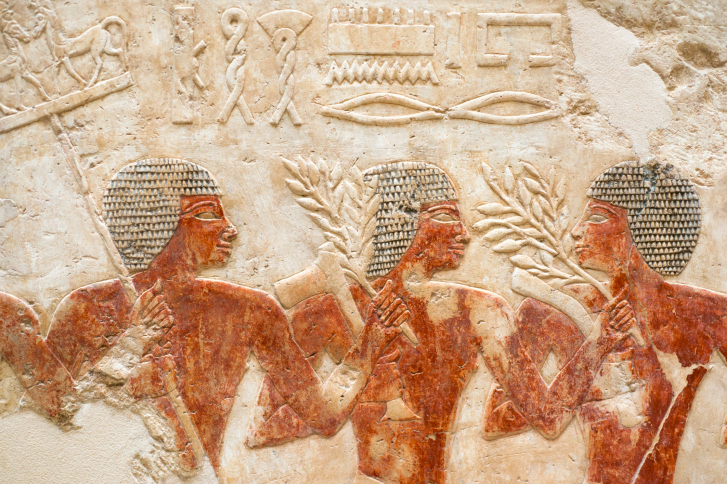 So let’s go straight back to the source—how did the ancient Egyptians depict themselves? Egyptian temples contain statues, wall paintings, and illustrated papyri that give us some clue as to how their creators saw themselves. The Egyptians depicted themselves with skin tones ranging from light brown, to red, yellow, or black. Men were often darker than women, probably to indicate that males did manual labor outdoors, but ancient Egyptian artwork was not realistic and most skin tones were probably symbolic rather than realistic.

For example, depictions of Egyptians with red faces or hair could have meant that they were under the spell of Set, the evil desert god. Some scholars argue that Egyptians used color in artwork to distinguish themselves from the Nubians (a people who lived in what is now Sudan), since they drew themselves with reddish or copper skin, but often painted Nubians black. Complicating the matter, a professor of African history has accused modern Egyptian authorities of tampering with ancient Egyptian artwork in order to hide their African features. 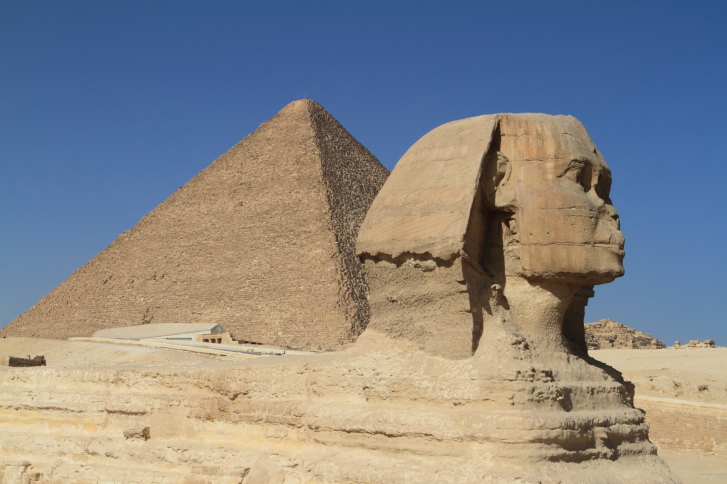 With its human head and lion’s body, the Great Sphinx of Giza is massive and incredibly old (it was probably built around 2500 BC). We don’t know for sure whose face the Sphinx was modeled after, but most Egyptologists believe that it depicts the pharaoh Khafra.

In the 1780s, the French historian Count Constantine de Volney visited the Sphinx, proclaiming it “typically Negro in all its features . . . In other words, the ancient Egyptians were true Negroes of the same type as all native-born Africans.” Modern scholars consider it almost impossible to judge the Sphinx’s ethnicity, since millennia of rain, wind, and heat have worn down the statue’s face.

However, in the early 1990s, Frank Domingo used his experience as a forensic artist for the New York Police Department to take measurements of the Sphinx’s face. His model definitely didn’t look like other statues of Khafra, indicating that the Sphinx was perhaps modeled on someone else. Instead, the model contained distinctively African features, which were generally missing from other depictions of Khafra. At least one orthodontist agreed with Domingo’s model, noting that the Sphinx’s face exhibited bimaxillary prognathism, a condition in which the jaws shift forward, which is often seen in people of African ancestry. 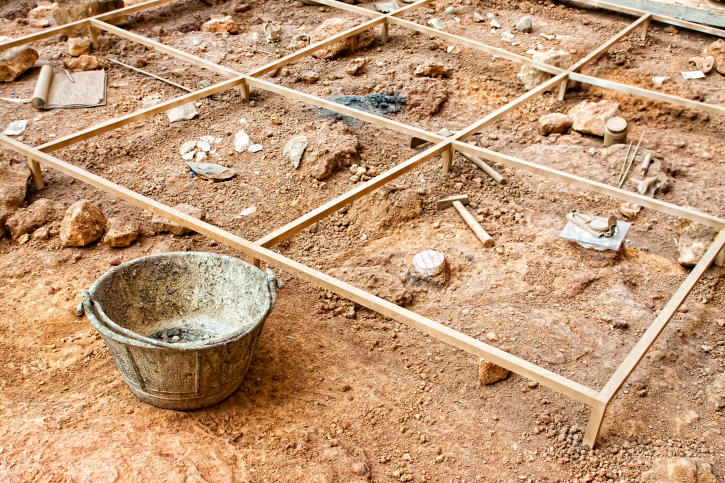 In the 1880s, the historian Sir William Matthew Flinders Petrie became one of the earliest significant students of Egyptian artifacts. Petrie made a genuine contribution to Egyptology—among other things he was the first to identify the prehistoric culture that predated ancient Egypt as we know it today.

But some of Petrie’s other ideas remain controversial. For example, he insisted that the incredible civilization of early dynastic Egypt showed no continuity with the local prehistoric peoples, but was instead imported by an invading “New Race,” which had conquered the “decadent civilization of the prehistoric age.” In support of this thesis, Petrie claimed that there was no continuity between Egyptian artifacts of the prehistoric and dynastic periods, meaning that the new race must have “destroyed or expelled the whole Egyptian population.” He thought that the “New Race” might have come from Libya or Persia.

Modern historians have suggested that Petrie’s theories owed more to 19th-century European colonial ideas than reality, suggesting that the dynastic race he identified were actually just native Egyptians. Interestingly, Petrie himself eventually acknowledged that he was wrong, grudgingly interpreting discoveries by the 19th-century geologist Jean-Jacques De Morgan to mean that artifacts “temporarily assigned to a New Race” could actually be traced back to the pre-dynastic period. 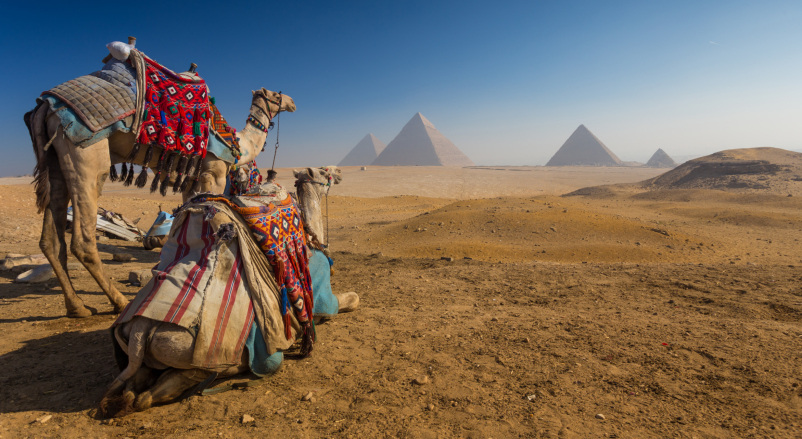 In the early 2000s, the Egyptologist Toby Wilkinson published a study of rock drawings found in the ancient Eastern Desert, the area of the Sahara between the Red Sea and the Nile. The rock carvings, dating from the early fourth millennium BC, depict typical Nile Valley imagery—boats, crocodiles, hippos—as well as images of humans wearing headdresses and wielding maces. This imagery has significant parallels with the later artwork of the dynastic Egyptians, leading Wilkinson to conclude that they originated in the Eastern Desert.

According to Wilkinson, the ancestors of the dynastic Egyptian peoples were semi-nomadic cattle-herders who moved between the riverbanks and the dry areas of the Eastern Desert. The desert in question covers parts of modern-day Egypt, Sudan, and Ethiopia, providing a compelling clue as to the origins of the Egyptian people. However, Wilkinson’s theory has not been conclusively proven, and he himself admits that it is difficult to precisely date rock art. 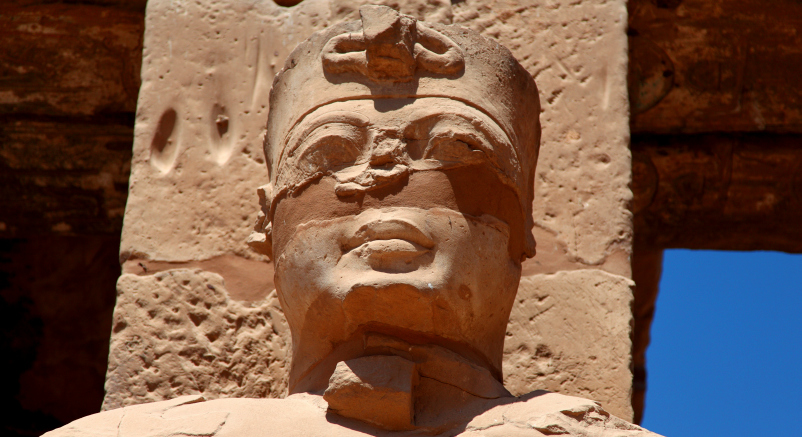 Can studying the teeth of ancient Egyptians shed any light on their origins and what they looked like? In 2006, a study of dental remains from almost 1,000 Egyptian skeletons found that Egyptian teeth remained similar throughout ancient history—in other words, the ancient Egyptian population probably remained remarkably homogenous between the pre-dynastic period and the early Roman Empire, with the most notable outlier coming from the isolated southern cemetery at Gebel Ramlah. The teeth mostly exhibited “simple mass-reduced dentitions” that strongly resembled teeth from contemporary populations throughout North Africa, with a lesser resemblance to teeth from Europe and Western Asia.

Interestingly, the study’s author, Joel D. Irish, suggests the dental records actually reflect a blend of “many biologically distinct peoples, including Saharan, Nilotic, and Levant groups.” However, he argues that this blend occurred in the pre-dynastic period, before the golden age of ancient Egypt. Once Egyptian civilization was flourishing, the population remained genetically similar, thanks to the extensive trade links that existed throughout the country, which largely outweighed any external influence. However, it is worth noting that dental measurements can vary widely even among closely related populations.