Spelunkers know that they will eventually be rewarded with wonders of the natural world found only in the dark, wet chambers of a cave. Water, wind, rocks, minerals, temperature, and pressure work together to form stunning geological (and frozen) creations. 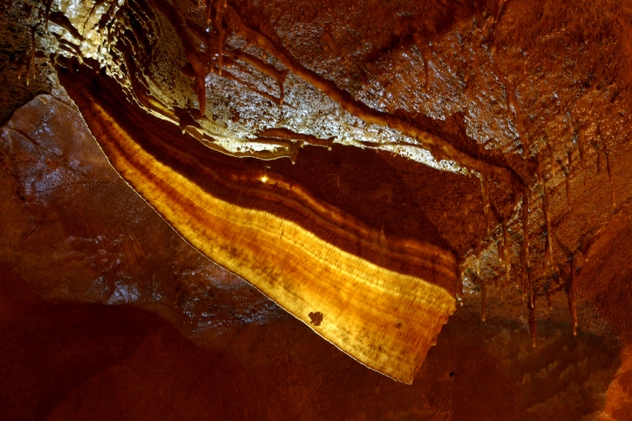 One of the most common and beautiful cave formations is cave drapery. It forms when water saturated with calcite clings to a sloping ceiling—held there by surface tension—and rolls slowly downward. As it rolls, carbon dioxide is lost to the atmosphere, and the solution becomes supersaturated with calcite, which then hardens into a thin trail. Proceeding droplets follow that same trail, depositing another layer atop it. Eventually, they form delicate, thin sheets of calcite that look like drapes hanging from the ceiling.

Small undulations in the ceiling cause ripples in the drapery. These ripples are often accentuated into folds and furls, particularly along the lower edge. Sometimes, the calcite-rich water also has iron oxide or organic material in it, which colors the drapery yellow, brown, and orange. As the concentrations of the organics and iron oxides change in the droplets, they leave multicolored bands that make these draperies look like bacon hanging from the ceiling. Virtually every cave in the world has draperies, and many have cave bacon. 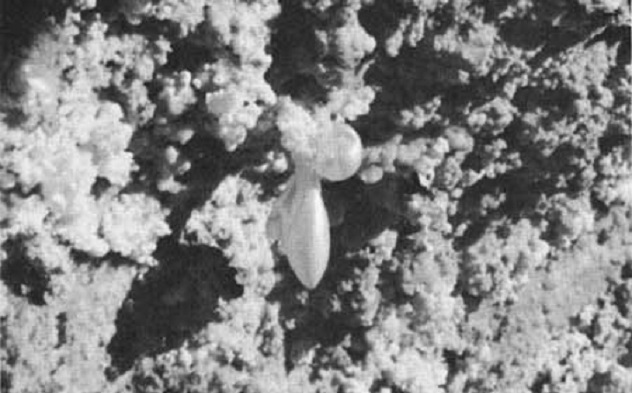 Cave balloons are so rare, little is known about them. It’s speculated that they form when high-pressure solutions seep through the pores in a cave wall coated with moonmilk. Moonmilk is a common surface deposit formed by dripwater on the walls or ceiling of a cave. Moonmilk is made of very fine, white crystals, usually carbonites such as calcite or hydromagnesite. When wet, moonmilk is pasty like cream cheese and has a high plasticity. If moonmilk is made of hydromagnesite, it may form a pouch around the seeping solution and expand like a party balloon, often pearl-like in luster.

Cave balloons are not permanent formations, eventually bursting or drying and cracking, particularly when the cave has low humidity. One of the best places to find them is the Jewel Cave near Custer, South Dakota. They have also been found in the caves of the Guadalupe Mountains in New Mexico, especially the Carlsbad Caverns.

Cave flowers are made of sulfates, usually gypsum. When water picks up carbon dioxide and sulfur then drips through pores in the walls, it can evaporate, leaving gypsum behind. Unlike stalactites, which grow from their tip, cave flowers grow from the originating pore and spread outward in curving variations that look like delicate flower petals. The curves are caused by changes in the flow rate of the saturated water. They can be found in abundance in Mammoth Cave, Kentucky. In 1896, one geologist described the blossoms he found there:

From a central stem gracefully curl countless crystals, fibrous and pellucid; each tiny crystal is itself a study; each fascicle of curved prisms is wonderful; and the whole blossom is a miracle of beauty. [. . .] Floral clusters, bouquets, wreaths, garlands, embellish nearly every foot of the ceiling and walls. [. . .] Clumps of lilies, pale pansies, blanched tulips, drooping fuchsias, sprays of asters, spikes of tube-roses, wax-leaved magnolias. [. . .] The fancy finds every gem of the green-house and parterre in this crystalline conservatory.

You can see the blossoms he was describing at around the 18:20 mark in the above video. Cave flowers are also common in Lechuguilla Cave, Carlsbad Caverns National Park, New Mexico. 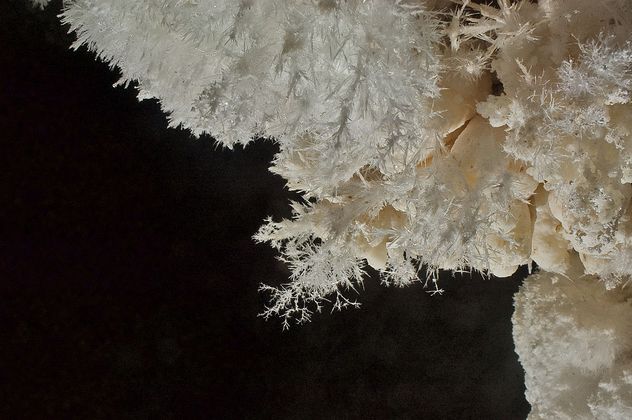 Frostwork can be composed of opal, gypsum, and even ice, but it’s typically made of aragonite. While it’s normally white, it can come in numerous colors. Aragonite crystals have a distinctive, needlelike appearance. With time, they will grow into frostwork “bushes.”

Aragonite frostwork is a chemical anomaly, since aragonite is not stable in the low-pressure, low-temperature environment of a cave. In that environment, a calcium carbonate solution will usually precipitate into calcite. But when the solution is infused with magnesium ions, calcite precipitation is inhibited, causing the solution to be become supersaturated, forming the needlelike aragonite as it evaporates. This is why frostwork often originates from calcite formations such as popcorn nodules or stalactites.

Frostwork is common, but its beauty and fragility make it a frequent target of vandalism. Therefore, it can best be seen in caves protected from or not frequented by humans. Frostwork can be found in the caves of Australia, South Africa, Korea, Japan, Romania, Norway, Brazil, and the US. 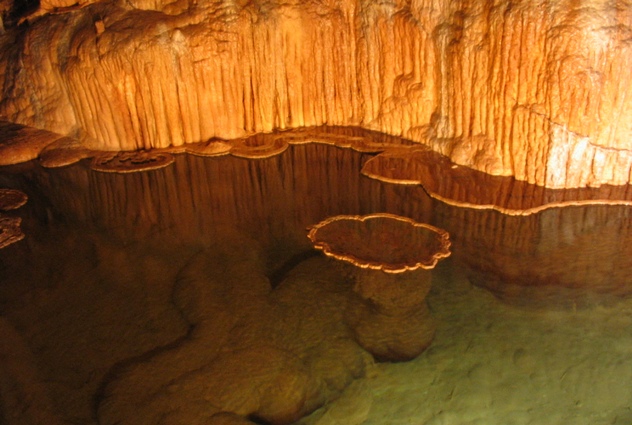 Shelfstone is a flat, often smooth ledge of a pedestal that has the appearance of a coffee table with a glass top. It is almost always formed by calcite precipitating on the surface of a cave pool. These precipitates usually float, forming ultrathin rafts. As more calcite precipitates, the shelf grows laterally just below the surface of the water, until it attaches to a wall or formation to become a shelf. It can also grow downward, sometimes all the way to the bottom of the pool, to form tables or lily pads.

The result is a formation that can be as thin as paper or thick enough to carry the weight of a man. If the water subsequently drops to a lower level, multiple shelfstone layers can form in the same area, sometimes with different colors. Some of the most spectacular shelfstone can be found in Lechuguilla Cave.

Boxwork gets its name from its visual similarity to the corrugated walls of a cardboard box. Unlike speleothems, which are created by precipitation or evaporation, boxwork is a speleogen formed by erosion or dissolution of the rock.

Basically, it’s a network of intersecting veins or fins as thin as paper. Made of calcite crystals cemented together by a quartz matrix, these veins fill the seams and cracks of the bedrock ceiling or walls of the cave. The calcite matrix is more resistant to erosion and dissolving chemicals than the bedrock, so it survives in its cemented form as the bedrock wears out or melts away.

The oxidation of metallic sulfides give the boxwork its ocher, orange, or dark brown hues. Boxwork comes in triangular, pyramidal, diamond, and irregular shapes. Boxwork is rare, usually developing in dry caves that do not have dripping water. The best examples of boxwork can be found in Wind Cave, in the Black Hills of South Dakota.

Cave pearls form in shallow pools by water drops saturated with calcite. As carbon dioxide is pulled from the droplet, calcite precipitates and coats a bit of debris lying on the bottom. This debris could be anything from sand to bones to pieces of other cave formations such as rafts or soda straws. Successive coatings of calcite increase the pearl’s diameter by up to 20 centimeters (8 in). Even if the original debris is irregular in shape, the pearl will usually form into a sphere, because it offers the smallest surface area for the greatest deposition. Pearls, however, can be elliptical, cylindrical, and even cubical.

Occasionally, excess calcite forms cups or nests around the pearl for it to sit in, and agitation of the pool polishes the pearl into a white luster. The agitation will also keep the pearl from attaching to the bottom of the pool until it is so large that even agitation will not budge it. It will then cement itself to the rock below. Cave pearls are common—literally millions can be found in Gruta de las Canicas, a cave system near Tabasco, Mexico. 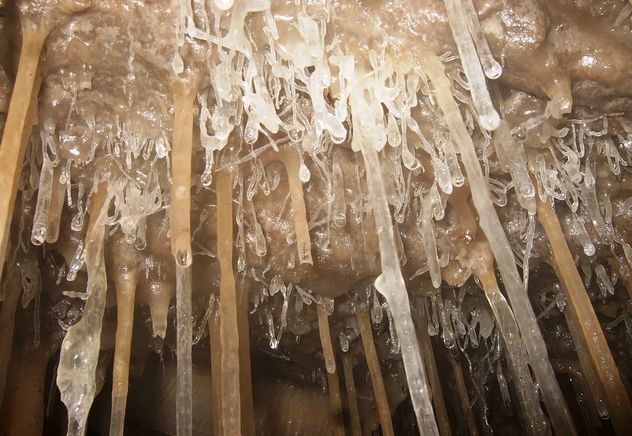 Like most of these formations, helictites are speleothems formed by water laden with calcite. They typically start out as stalactites or soda straws on a cave’s ceiling or wall. The water flows through a pore, down a capillary or tube to the tip, where it precipitates calcite and grows straight downward.

Then something interrupts the water flow and sends it in another direction, changing the direction of the capillary and creating a formation that defies gravity. These interruptions can be caused by impurities in the water, clogs of the original capillary, irregular crystal formations, and even air currents. The result is a diverse group of formations that range from delicate filaments to antler-like growths to graceful spirals. There is even a specialized helictite that grows in water and looks like floating pasta. It can even form multiple branches that resemble a plumber’s nightmare.

Underwater helictites can be found in Lechuguilla Cave in New Mexico. The helictites in Black Chasm Cavern near Volcano, California, are so beautiful that the cave was designated a National Natural Landmark. 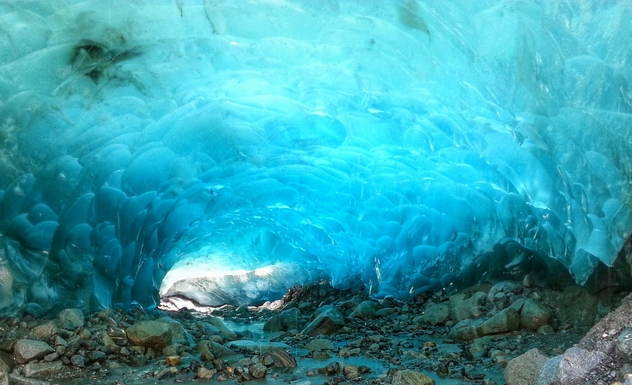 Ice caves or caverns are basically water rather than geological formations. But they are no less spectacular, sporting frozen flows, ice columns, and stalactites. Ice caverns come in many forms. Sometimes, glaciers are hollowed out to form a cave. The Mendenhall Ice Caves are beneath the glacier of the same name, located just outside of Juneau, Alaska. The glacier is 19 kilometers (12 mi) long, although it’s melting and has lost almost 3 kilometers (2 mi) since 1958.

Another form of ice cave happens when snow mounds slide off the side of mountains and collect at the base. The snow mounds are subsequently hollowed out by runoff. Popular examples include the Big Four Ice Caves in the Mount Baker-Snoqualmie National Forest, Washington. In July 2015, one hiker was killed when the ceiling in one of the caves collapsed.

Elsewhere, winter or a nearby glacier can create an ice cavern at the entrance to a cave. The first kilometer of the 42-kilometer (26 mi) Eisriesenwelt Ice Cave in Austria is iced over every winter. In the spring, the ice near the entrance melts, seeping into the still-frozen lower areas and creating spectacular ice formations that remain all summer. You can find another example of this type of ice cave in Skaftafell, Iceland. 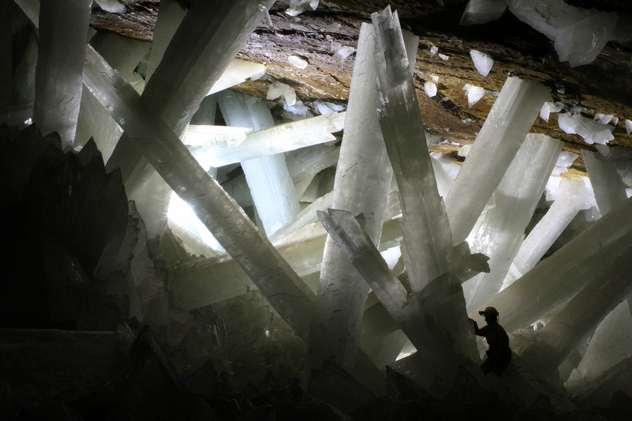 We have previously mentioned the giant selenite crystals found in the Naica mine near Chihuahua, Mexico. What’s amazing is how they were formed. Usually, caves are cool, but the Naica mine sits atop an intrusion of magma that raises the temperatures in the Cave of Crystals to 44 degrees Celsius (112 °F) and humidity to 100 percent. People who want to tour this natural wonder must wear respirators and suits with ice packs sewn into them around the upper torso. Even with the suit, the tour can only last 20 minutes. The Cave of Crystals was discovered in 2000.

For hundreds of thousands of years, water saturated with calcium sulfate poured into these caves. When the temperature stabilized at 58 degrees Celsius (136 °F), water minerals—particularly gypsum—converted to selenite crystals. With a stable temperature that lasted for millennia, the crystals grew to unprecedented sizes. The largest crystals measure 11 meters (36 ft) in length, are 4 meters (13 ft) in diameter, and weigh nearly 55 tons. The giant crystals are soft and easily scratched. The bigger crystals are estimated to be at least 600,000 years old.

Steve has written the biography 366 Days in Abraham Lincoln’s Presidency: The Private, Political, and Military Decisions of America’s Greatest President, and his work has appeared on KnowledgeNuts.

10 Incredible Good News Stories Nobody Is Talking About