The fantastical behaviors of sentient animal-things in Disney films aren’t as farfetched as they appear. It turns out that adorableness permeates the whole animal kingdom to a surprising extent.

10Vampire Bats Cuddle (Far) More Than Any Other Bat 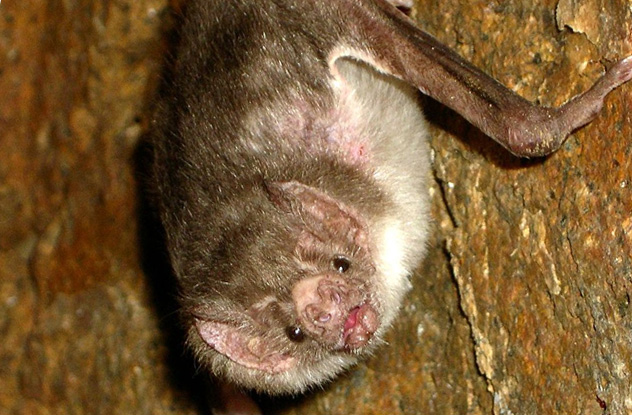 Contrary to the bad rap foisted upon them by the media, vampire bats are total cuddle monsters. They engage in fastidious cooperative grooming sessions just like primates and curious teenagers do.

Interestingly, the vampires—painted as the vilest of chiropterans—are 14 times more likely to indulge in these behaviors than other types of bats. Like the more advanced, poo-flinging hominids, bats groom each other to strengthen and maintain the strong social bonds necessary when the world hates you.

The vampires spend a decent chunk of each day grooming each other: 3.7 percent of their awake time is spent nuzzling up to friends and family. Were humans this considerate, it would equate to approximately 36 minutes spent each day doing your buddy’s hair and picking insects out of his fuzz.

That figure does not include the several hours bats spend tending to their own coat. As a matter of fact, it became clear that vampire bats spend no more time self-grooming than other bats, suggesting their gregarious hygienic habits are truly due to social dynamism, and not because they’re nature’s biggest germophobes. 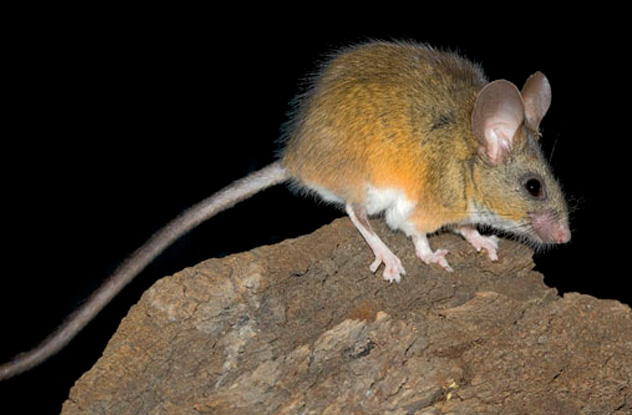 For feral, primal creatures, talking animals in Disney films show great fidelity to their spouses. In the material animal kingdom, such monogamy is less common, but the California mouse stands for old-fashioned family values.

Researchers performed a genetic analysis of 98 baby mice from 27 families. As they’d suspected for many decades, the study confirmed that each offspring was the spawn of its monogamous parents.

In a decidedly more comical experiment, researchers dusted the female rodents with fluorescent pigments. They reasoned that these substances should rub off on any male suitor during relations, revealing those getting a little bit on the side. Scrutinizing males later on, the matched pigments proved that each male was faithful to his significant other.

How inspiring—if these simple creatures can conquer instinctive urges for true love, well, there’s surely hope for us yet! Maybe not so much—it turns out this rodent monogamy is more mind control than timeless romance. Females actually secrete a chemical through urine that compels dads to stick around and take care of the children. 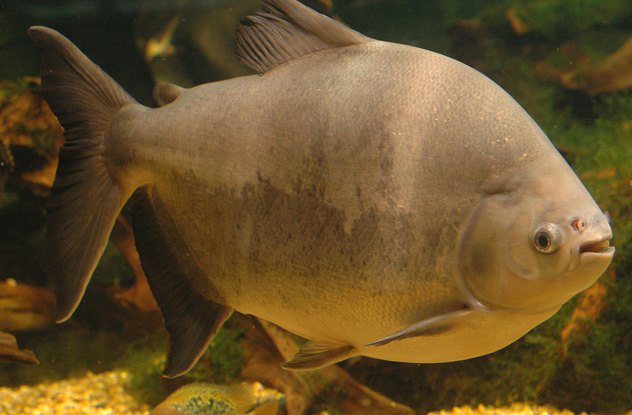 While most people think piranhas will turn cows into hamburgers in mere minutes, the whole thing’s a bit overblown. And a newly discovered herbivorous variant, Tometes camunani, subsists solely on aquatic herbs in spite of its bloodthirsty reputation. First identified in 2013, this much gentler piranha lives dangerously in Amazonian rapids. Sadly, it’s being evicted from its habitat by the many dam-building projects competing to tap the Amazon’s hydroelectric potential.

Riparian herbs are delicious, no doubt, but an intimate piranha relative called the tambaqui boasts an unexpected sweet tooth. This beefy, 30-kilogram (65 lb) mega-piranha thankfully prefers the flesh of fruit to that of creatures and supports itself by scavenging whatever may have fallen from trees.

Fruitarian fish are a boon for the Amazon because the tambaqui carry the seeds several kilometers away before excreting them back onto the flora. They do so better than almost any other fruit-eating animal, simians and birds included, as a solitary fish can disperse 700,000 individual seeds from over 20 different plants in a single dump.

The blue-footed booby earned its unfortunate name from the Spanish word bobo—meaning “clown” or “fool”—a reference to its overall dopiness and hopeless clumsiness on land. But boy, can they cut a rug.

To woo the fairer sex, man-boobies first present prospective dates with a lovingly selected stick or stone. Upon acceptance of this modest but thoughtful dowry, males begin an imperious strut to flaunt their wonderfully hued kicks. Ladies prefer mates with the bluest, most ostentatious of feet, so men instantly turn the swag on when sighting a potential lover—most times, to hilarious effect.

The booby has long ago perfected an arsenal of dance moves that humans didn’t discover until the late disco era. The most comical of these is called skypointing, which involves craning one’s head skyward and extending the arms away from the body, all while hopping from foot to foot and perhaps whistling like a maniac. Instead of scoffing or putting on airs, the females gladly join in to lock beaks and show off their own two-step.

Monkeys are a lot more devoted to dental hygiene than most humans because on numerous occasions, they’ve been caught teaching each other how to floss. Most recently, a female from a troop of baboons stationed at Paignton Zoo in the UK has learned to pluck bristles from brooms to run through her teeth.

Brooms are supplied to all baboons as cheap playthings, but only the precocious female has realized the benefits of concerted oral care. However, there is hope for the others, as zookeepers have observed them attentively watching the exhibition. Researchers aren’t sure whether the baboons’ primary motivation is hygiene or possibly the sweet sensuality afforded by running a bristle against one’s gums, but all agree this is pretty cool.

Monkeys and floss go way back, however, and macaques in Lopburi, Thailand, are the true dental OGs. The group of 50 macaques frequents a local Buddhist temple, plucking hairs from visitors to use as strands of floss. No retaliatory actions have been taken, as the animals are considered sacred entities and are venerated instead of shooed.

The most adorable part? When scientists set up recorders to spy on macaques’ dental routines, they found that mothers spent twice as much time flossing and were much more likely to repeat the ordeal if a baby was present.

Orangutans are great mimics, and no one proves its better than Suriya, a male ‘tan from South Carolina who has commandeered the preserve’s four tiger cubs. The Myrtle Beach Safari preserve’s caretakers were tending to baby tigers earlier this year when Suriya began bottle-feeding the cubs, mirroring their human handlers. The orangutan and cubs are now great friends as well as a real-life Disney scene.

Ape ingenuity is capable of even more impressive acts of mimicry, like discovering how to whistle. The distinction belongs to the 30-year-old Bonnie, an orangutan from the Smithsonian National Zoological Park, who presumably picked up the habit from a past caretaker.

But that’s just a blip on the ape intuition radar because an orangutan is learning how to talk. Tilda, from the Cologne Zoo, has taught herself to say “blah” over and over. It’s totally not random because Tilda only does this when caregivers are present. She’s also taken up clapping and clicking. This is a revolutionary finding because researchers did not believe orangutans had enough oral dexterity to make such noises.

4Mice Sing To Each Other 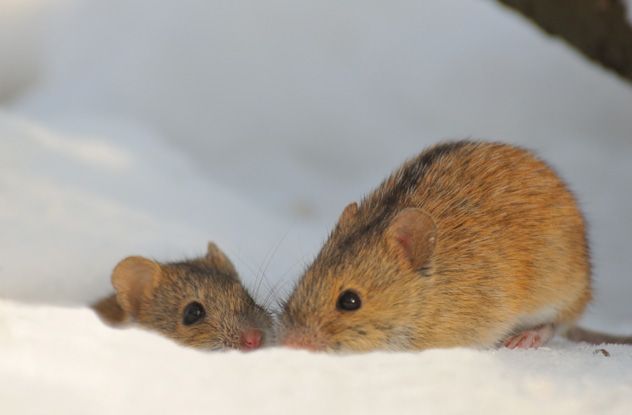 The art of song is not limited to humans and birds, as science tells us mice also love to sing. To secure a mouse-wifey, males croon out rodent soft-rock love ballads to show their worth as suitors. The males have a varied musical arsenal, including “calling songs” that are employed when they catch a whiff of female urine. Once the female emerges, the tune switches as the male attempts to talk himself up.

Far from prudish, females are known to return the favor if they’re feeling the beat. Sadly, these rodent duets propagate at ultrasonic ranges, below the human hearing threshold.

And just like the all-animal barbershop quartets in Disney movies, mice that sing together eventually cooperate to belt out the same tone, producing an adorable unison. Mice also exhibit exceptional musical plasticity and can learn new songs to supplement the classics. Previously, researchers believed that each mouse repeated his signature song ad nauseam, but evidence shows an unexpected level of creativity.

African cichlids aren’t a passionate bunch. Females dump their eggs into a ditch, males swings by to fertilize them, and then females scoop the seeded eggs into their mouths to bake into more cichlids. The mother-to-be is exceptionally attentive during the several weeks of brooding, abstaining even from food, lest an egg slip out while she eats. Fathers are somewhat less involved and tend to devour the babies if given the chance.

Having survived aquatic infanticide, the incompetent baby cichlids require much tending, for the ocean is cruel, and defenseless fry make easy snacks for many creatures. So cichlids, as well as several other types of equally ugly fish, have developed a novel way to protect their spawn: buccal incubation, or mouthbrooding, wherein baby fish are inhaled to the relative safety of their mother’s mouth.

Yes, watching a fish orally vacuum up a school of its children might be hilarious, but what other animal can instantly shield all its babies from danger at a moment’s notice?

2Giraffes Hum To Each Other At Night

Giraffes Hum At Night – Who Knew?

Giraffes don’t tolerate small talk and are in fact among the world’s most taciturn creatures. Almost every animal has at least a couple readily associated sounds or vocalizations, yet what do you do if asked to make a giraffe noise? Shrug? Maybe grunt?

Distressed that they’ve known giraffes for years yet have never heard them speak—other than an odd snort here and there—researchers from the University of Vienna bugged the enclosures at three European zoos and compiled 947 hours of giraffe recordings. They had to be saying something, quite possibly at infrasonic ranges (like elephant chatter) and therefore outside the realm of human hearing.

The giraffe scientists were pleased to discover their reticent giants were actually producing a great variety of noises, all night long. Giraffes hum to one another throughout the night. And while it’s at low frequency (92 Hz), it’s still audible to human ears if you listen closely and believe.

1Mantis Shrimp Go Easy On Each Other

With the ability to launch their meaty appendages at gun muzzle velocity, mantis shrimp pack the animal kingdom’s meanest punch. Yet they, like most other organisms, must battle for territory against members of their race, producing an evolutionary conundrum—should these shrimp (not actually shrimp) pulverize each other into specks, neither would be left well enough to impregnate the severely impressed lady shrimp.

But nature always finds a way. And mantis shrimp have learned to spar in a surprisingly considerate manner. In the midst of territorial disputes, they offer up their shielded rear ends as punching bags. Both combatants focus on these sturdy little areas while pulling any strikes to exposed, softer body tissues.

Mantis shrimp can also avoid conflicts by intimidating one another via “meral spread” displays—think peacocks fanning out their tail feathers. But flashing one’s colors rarely works, and out of the 34 contests observed by researchers, all but one ended in a fight.