Next time you are walking on the beach, there is a possibility, albeit a small one, that you may come across a hideous, stinking mass of life coughed up from the grimiest depths of the ocean floor: in other words, a globster. For those who don’t know, a globster is an unidentified organic mass that is washed up on the shoreline of a body of water. Many fascinating, albeit slimy, globster (and other sea carcass) cases have been documented over the years, all united by the stimulating sense of mystery surrounding them. Science has explained away many historical cases; however some remain enigmatic to this day. Listed below are some of most notable recorded discoveries of both globsters and other interesting sea carcasses. 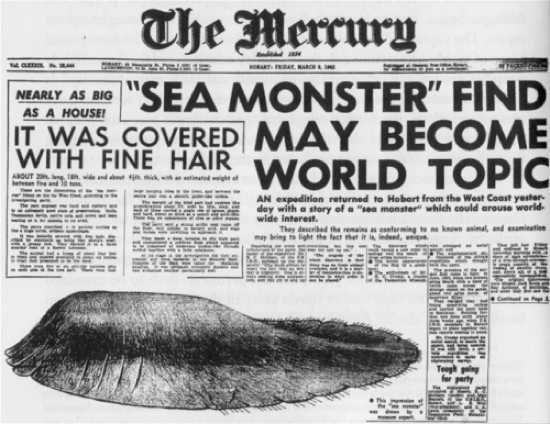 The Tasmanian Sea Monster (otherwise known as the ‘Tasmanian Blob’) was washed ashore on a beach in (have a guess) Tasmania. The mysterious dead organism, despite having no identifiable bone structure, was originally believed to be a new species of mammal. Attempts to scientifically explain away such claims were initially unsuccessful. The creature lacked eyes, a visible mouth and was covered in stiff white hairs, though given the colossal size (over 20ft in length) it was hypothesized that the creature was a badly decomposed whale. Media outlets quickly latched onto the mystery of the case, given the initially reasonable claim that the Tasmanian Blob was a cryptic. The true identity of the globster remained a mystery until 1981, when scientific analysis of collagen fibers confirmed the creature to be a whale. 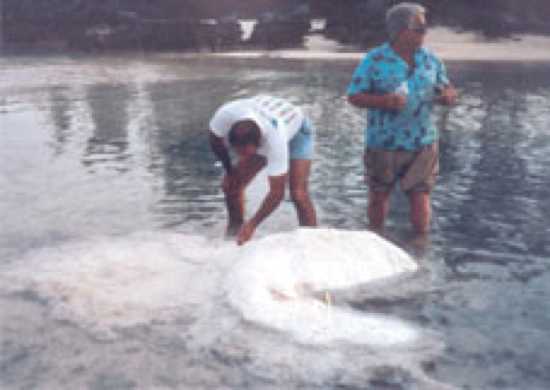 In early 1988, a fisherman named Ted Tucker (pictured above) came across a fibrous blob on the shores of Bermuda. The creature was initially believed to be a cryptic, but subsequent analysis has disproved this theory. The organism was described as being extremely stark white in color, with five distinguished limbs. The Bermuda blob shared the consistency with other famous globsters of having no eyes, mouth, or any other features sufficient to definitively classify it. Seven years after the initial discovery, with the help of scientific techniques not previously available, it was proven to be the remains of a diseased whale. This came as a shock to many researchers, as the earliest tests strongly suggested the creature was related to an elasmobranch (shark or ray).

When fifteen year-old Owen Burnham explored Bungalow Beach in Gambia, he did not expect to discover a bizarre sea carcass which would remain shrouded in mystery for years to come. Being a wildlife enthusiast, Owen decided to make sketches of the creature (shown above) which are the only surviving likenesses, as the carcass was never photographed. The beast, named ‘Gambo’ after the geographical location of its discovery, was transported to a nearby village where Owen lived, and was decapitated by villagers, who proceeded to sell the head to an unidentified tourist.

In terms of appearance, the creature was described as being fifteen feet in length, with a light brown coloration and oily skin. The head bore similarities to that of a dolphin, though the mid-section was significantly wider than such an animal. Gambo appeared to have been wounded before death, as the rear flipper was almost severed and internal organs were openly exposed. The current location of the creature is unknown, and scientists can only speculate as to what species Gambo truly belongs to. 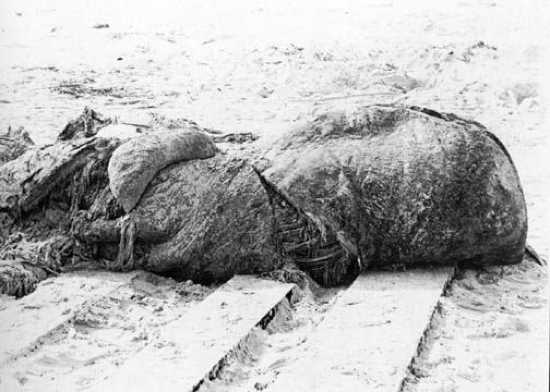 Being one of the earliest, and perhaps the most famous of globster cases, the St. Augustine Monster caused a massive media frenzy upon its discovery by a group of children. The creature was initially believed to be evidence of a new species of giant squid, given the dull pink skin which is characteristic of such animals. Although this theory was later disproved, it is perhaps worth noting that in 1925 the colossal squid was discovered and acknowledged as a new species. In terms of appearance, the globster was described as having seven tentacles, all of which were very long in proportion to the body, and many of which had been severed and scattered among the beach. Unlike many other globster cases, a head was clearly identifiable and was shaped like a sea lion. Using modern science, the alleged cryptic was revealed to be nothing more than the remains of a whale. 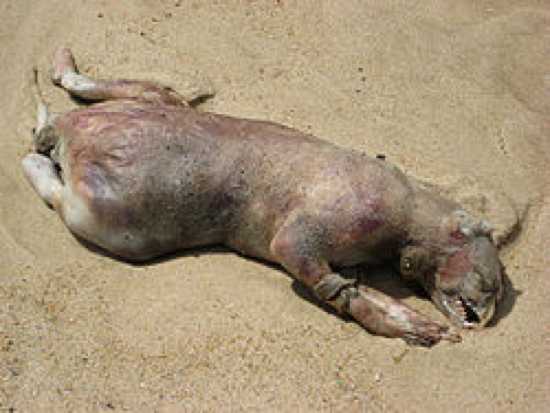 Perhaps the most bizarre feature of this list in terms of appearance, the Montauk Monster washed up on a beach in the state of New York as recently as 2008. The creature appeared to have the head of a bird, despite having teeth visible on the lower jaw, with the torso of a canine, despite being completely hairless. Fast-forward to the present day and biologists are still speculating as to the origin of the Montauk Monster. A popular theory is that the creature is a diseased raccoon which lost its hair, before having the entire upper jaw decompose in the sea, giving the appearance of a beak. However, this theory has been largely discounted as a raccoon’s legs are significantly shorter than those shown in the picture. 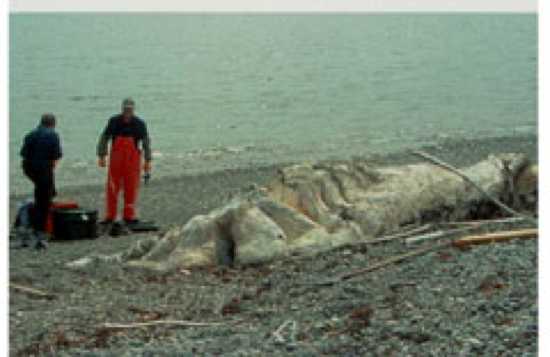 The story of the Newfoundland blob is not mysterious, just disgusting enough to the make the average person violently ill. The globster was proven to be the remains of a sperm whale almost immediately upon discovery, given the scientific identification techniques which were not previously available for use with other globster cases. Scientists have also determined how the slimy hulk of fat and skin came to end up on shore; after the whale died, years of decay led the hard bones to seep out of the carcass to the bottom of the sea, leaving an empty shell of blubber. The internal organs also totally decomposed. All the identifiable features of the whale (face, fins, etc.) melded into one giant, faceless mass. This led the slimy remains to float on the surface of the water, before washing up on a beach in Newfoundland. 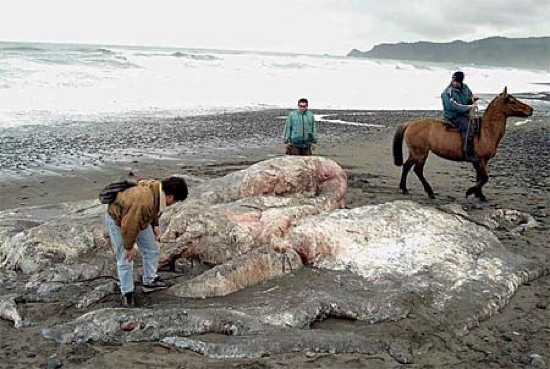 The Chilean Blob is notable for a number of significant differences from other globster cases. Perhaps the most obvious is its sheer size; the creature measured twelve meters across and weighed over thirteen tonnes. The texture of the carcass was partially translucent, leading many biologists to wrongly identify the creature as an unknown species of giant octopus. For this reason, the carcass made worldwide headlines upon its initial discovery. Some more enthusiastic believers put forward claims that the globster was the partial remains of a leviathan. The blob has since been identified as a whale carcass, though many biologists contest this view because the creature had quickly been established as an invertebrate. 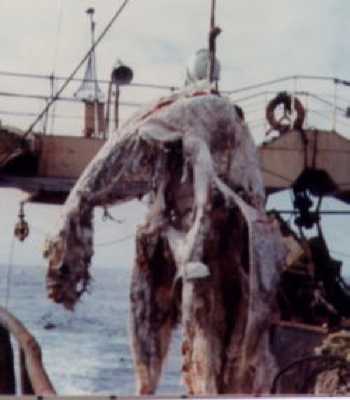 The Zuiyo-maru carcass was discovered by Japanese fishing crew aboard a trawler named the Zuiyo-maru (hence the name). The decomposing corpse was hauled out of the ocean after being caught in the trawl, to the astonishment of the crew, who were convinced they had discovered a prehistoric plesiosaur (they nicknamed the creature ‘Nessie’). Despite the initial excitement, the crew resolved to dump the carcass back into the ocean, as the rotting flesh posed a high risk of spoiling the already caught fish. They took photographs (shown above) and collected samples of the creature, including bone, skin and fat.

Today the Zuiyo-maru carcass remains unclassified, though evidence strongly suggests that the creature was a badly decomposed basking shark. Although the creature appears to have a plesiosaur-like head, this appendage would be expected from a decomposing basking shark; the jaw and lower head typically decays first. Despite this some Japanese scientists remain convinced the Zuiyo-maru carcass is the remains of a cryptic. 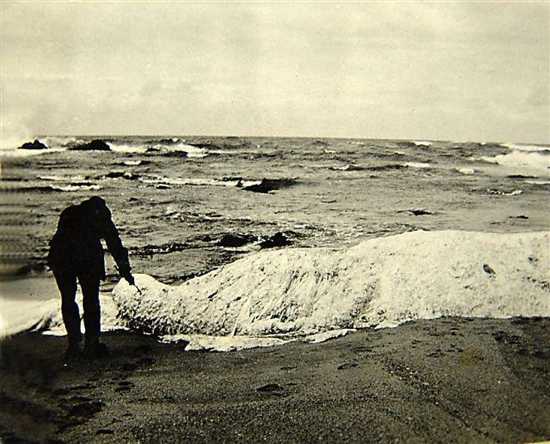 Amazingly, Trunko is the only globster to have been sighted whilst still alive, thus discrediting claims the corpse was a mass of whale blubber (a common globster explanation). According to witnesses, Trunko struggled to escape from two killer whales off the coast, using its tail to fend them off for more than three hours. Trunko washed up on a South African beach days later, and was so-named because of the characteristic elephantine trunk, which was not initially visible from the coast.

The purported appearance of Trunko is bizarre even by globster standards; the trunk protruded oddly from no particular part of the torso, and the torso itself was covered in snowy white fur (to the extent that upon discovery it was believed to be a polar bear). Besides this, Trunko had a crustacean-like tail, no visible face or bone structure, and was totally devoid of blood. Only four photos were ever taken of Trunko though, incredibly, they were completely overlooked by globster researchers until 2010. The first photo discovered shows a man prodding the renowned elephantine trunk with a stick (shown above).

After a storm on the island of Stronsay in 1808, located in the Orkney Islands, a gigantic serpentine creature washed ashore. In the present day, over two hundred years after the discovery, the creature remains totally without explanation from biologists. In terms of appearance, the Stronsay Beast shared strikingly similar characteristics to the so-called Loch Ness Monster – the neck and tail were extremely long and slender, with a wider torso with three pairs of short paws attached. The creature had a mane of sharp bristles which continued down from the neck to the lower back.

Measurements indicated that the creature was fifty-five feet long from head to tail, and would have been even longer, but much of the tail had decomposed. This rules out the commonly cited explanation of a basking shark, as the longest basking shark recorded in history was less than forty feet in length. During the time period, the natural history society of Edinburgh attempted to classify the creature, but failed, and concluded the beast to be a serpent. In the present, many cryptozoological figures have attempted to explain the enigma of the Stronsay Beast, but given the absence of photographs, is unlikely the mystery will ever be solved.