In modern times, Hell is often seen as an abstract concept, even for believers. However, throughout history, Hell was often considered a concrete place, usually contained within the center of the Earth.

Archaeological anomalies were often explained in supernatural terms. In the absence of scientific explanation, it is easy to see why so many sites were considered to be entrances to Hell itself. 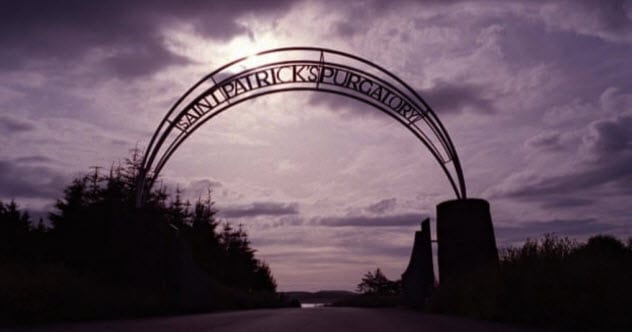 Station Island in County Donegal is the setting for St. Patrick’s Purgatory, a pilgrimage that sees the faithful spending three days without food or sleep and standing on specially sharpened stones in veneration of their patron saint. Pilgrims have been visiting the site for 1,500 years.

But Station Island has a darker purpose. In one corner of the island is a cave which was believed to be the entrance to purgatory and the turnstile to Hell.

During the Middle Ages, pilgrims traveled hundreds of miles to lock themselves inside “Patrick’s hole” to experience purgatory and gain forgiveness for their sins. During the three-day pilgrimage, they waded to the island from the sea—fasting, praying, and walking barefoot over the jagged stones to the cave.

They would enter the dark cave and experience purgatory while they still had a chance to atone for their sins. They would also see the gates to Hell, though none but the dead were allowed to pass through them.[1]

One medieval knight, known only as Owen, wrote an account of his experiences in St. Patrick’s pit. They involved demons, pitiful humans crouched and wailing in fear, and a narrow, slippery bridge high over a swirling river which led to the way out of or to Hell. Owen frantically repeated a prayer before taking his life in his hands and traversing the bridge.

For some reason, the entrance to the cave has been closed off since 1625 and a bell tower has been built over the opening. Modern-day pilgrims have to be content with an all-night vigil instead. 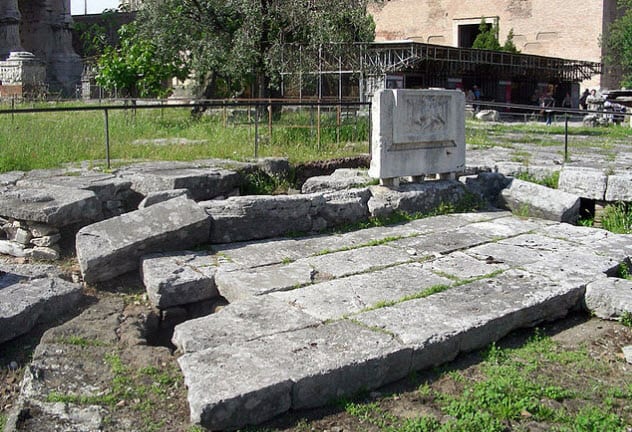 Lacus Curtius was a small pool on the Roman Forum. Although it had been a lake at one time, it was drained and just one small area remained. The theories about the purpose of the pool have become more vivid since the discovery of several ancient skeletons that had been bound and thrown into the pool.

According to the most popular theory, when Rome was under siege, the ground opened up to reveal a great ravine that dropped into the center of the Earth. Seers declared that the Roman Empire would stand forever if its greatest strength was thrown into the ravine.

On hearing this, the great but aging warrior Marcus Curtius mounted his horse. He called out that youth was more important to Rome and rode into the cavern, thus saving Rome from destruction.[2] 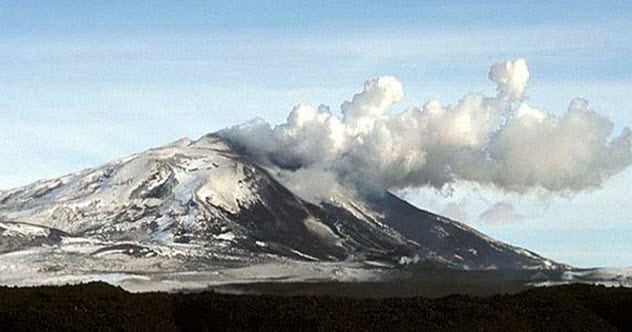 Around October 1104, Mount Hekla in Iceland erupted. The volcano has been constantly active ever since. In a land of ice and snow, the sight must have been particularly frightening.

The spewing lava could be seen from miles away, and passing ships believed that the Earth had opened up to expose Hell. Sailors must have been particularly superstitious. When they saw birds, the sailors believed that the feathered creatures were actually souls trying desperately to escape the fiery pit.

The name of the volcano was known and feared all over Europe as the gateway to Hell. In the 16th century, the historian Caspar Peucer wrote that the gates of Hell could be found in “the bottomless abyss of Hekla Fell.”

Even today, Mount Hekla remains the subject of much superstition as it is locally believed to be the place where witches gather to meet the Devil.[3]

7 The Cave Of The Sibyl 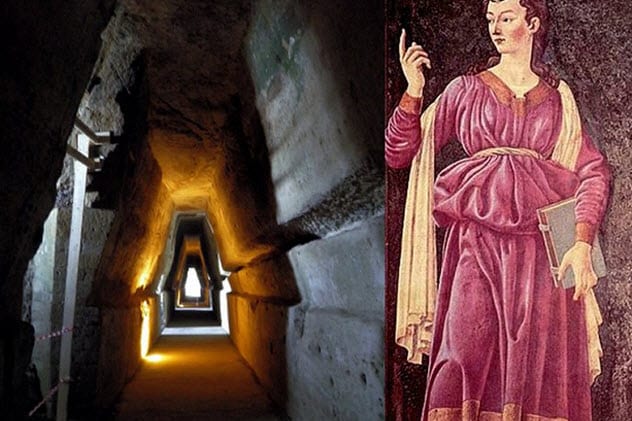 In ancient Greek mythology, a sibyl was a female prophet associated with a particular temple and a particular God, usually Apollo.

The Sibyl of Cumae was said to have made a bargain with the god Apollo and was granted eternal life. However, she forgot to read the fine print because Apollo did not give her eternal youth. Instead, Sibyl grew wizened and old, dispensing her prophecies from the darkest corner of her cave so that no one should see her.

Virgil describes Sibyl’s cave in The Aeneid as having a hundred exits and a hundred doors. Whispering can be heard behind each door. One of the doors leads to the underworld, the ancient Greek version of Hell where the dead reside. The sibyls are so important that they can even be found on Michelangelo’s Sistine Chapel fresco, though why is a bit of a mystery.[4] 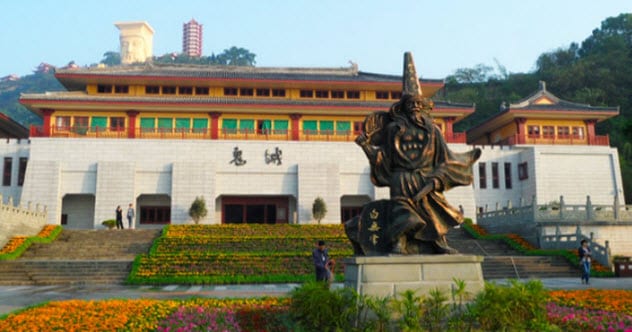 Situated on Ming Mountain in China, Fengdu is a city dedicated to the dead.

The 2,000-year-old “ghost city” comprises a network of shrines and temples. The town was named after two officials who were supposed to have practiced meditation until they achieved immortality. When combined, their names meant “king of Hell.” Which is creepy.

The city was cut off from the surrounding area by flooding. Sometime during the Tang dynasty, a temple was built and dedicated to Hell and the afterlife. Some of the statues are, frankly, disturbing.

The city’s isolated nature enhanced its mystique. It developed three stages for the dead to pass through on their way to the afterlife, all of which can be visited today. First, they must cross The Bridge of Hopelessness that separates life from death. The bridge was guarded by demons that were apt to push wicked people into the swirling waters below and straight to Hell.

If the dead passed that test, they had to cross the Ghost Torturing Pass, where there are many sculptures of demons. They are said to be met by Yama, the king of Hell himself, who passes judgment upon them.

If they survive that, the final test is to stand on one leg for three minutes. As a final test, that seems a bit lame. Although if you fail, you are thrown into the fiery pit of Hell.[5] 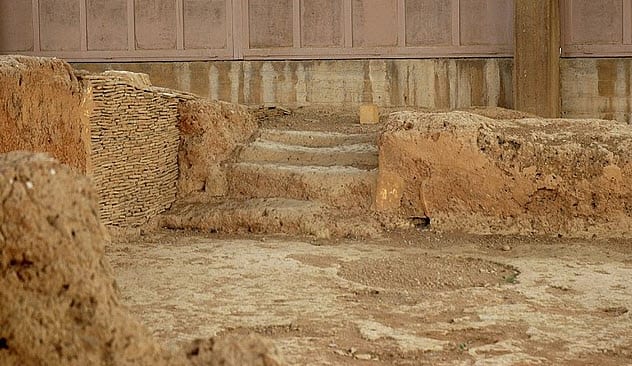 Lerna is famous in Greek mythology for being the home of the nine-headed hydra. The hydra had eight mortal heads as well as an immortal one. As soon as a mortal head was lopped off, another would appear, making the hydra invincible.

Then Hercules, as his second labor, cut off the eight mortal heads, cauterizing each one as he went along to prevent the heads from regrowing. Finally, he distracted the hydra with a crab before lopping off the immortal head with a special sword given to him by the goddess Athena.

Lerna was also a place with a lot of swamps—possibly home to snakes with multiple heads—and natural springs. It was the spot where the great god Poseidon slept with Amymone and whispered to her the secret of the Lernaean lake.[6] 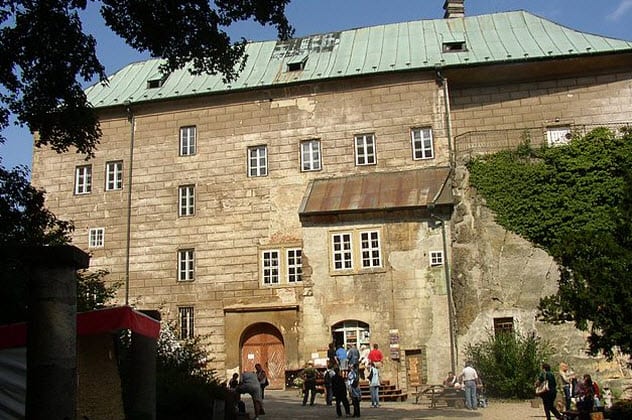 Houska Castle near Prague may be one of the strangest places on Earth. It was built in the 13th century specifically to cover a chasm through which foul smells and mysterious gases emanated.

It was believed that the chasm was an entrance to Hell. Knowing that a demon would be unable to cross consecrated ground, they built the chapel of the castle directly over the chasm, trapping the malevolent spirits underground for 800 years.

The castle was not built for occupation. There was no well. Water had to be collected in barrels. It didn’t even have a kitchen. It wasn’t near any natural water source or trade routes. In addition, it didn’t have any vantage point for the purposes of lookout. It wasn’t even fortified against attack—from the outside at least.

Its sole purpose appears to have been to prevent whatever was in the hole from getting out. There were openings for archers to shoot through into the courtyard in case the demons crept up through the thick flagstones to attack them. Winged Hell beasts were supposed to fly up and attack surrounding cattle.[7]

Before the castle was built to contain Hell, local prisoners were offered freedom in exchange for being lowered into the pit on a rope to discover what was down there. Unsurprisingly, most chose the comfort of their prison cells.

One prisoner accepted and was lowered into the pit, where he began to scream incoherently. When he was pulled out, he was said to have aged decades in minutes and to be incoherent. He died soon after from unknown causes.

Continuing the hellish theme, the castle was used as a hunting lodge for senior Nazis during World War II. Houska Castle is said to be the place where they drew up their plans to create a master race. 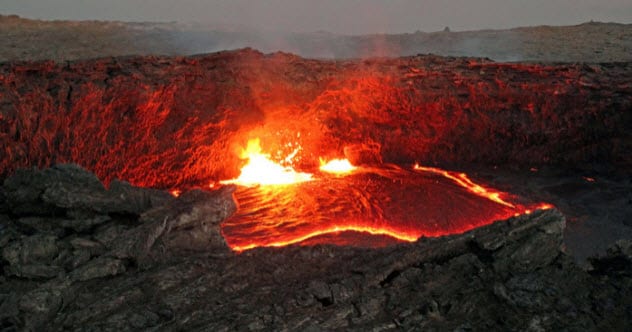 Erta Ale in Ethiopia is the site of the largest of only five known lava lakes in the world. Temperatures inside the cauldron are said to reach around 1,100 degrees Celsius (2,000 °F). The volcano is known locally as “Smoking Mountain” and “Gateway To Hell.”[8]

Lava can be seen constantly breaching the rim of the volcano, and it is easy to see why it got its name. The molten lake has been burning for decades and shows no signs of cooling. Tourists often walk to the rim of the crater to look into the fiery pit despite the obvious dangers of death, if not eternal damnation.

Erta Ale was featured in the 2010 movie Clash of The Titans as an entrance to Hell. 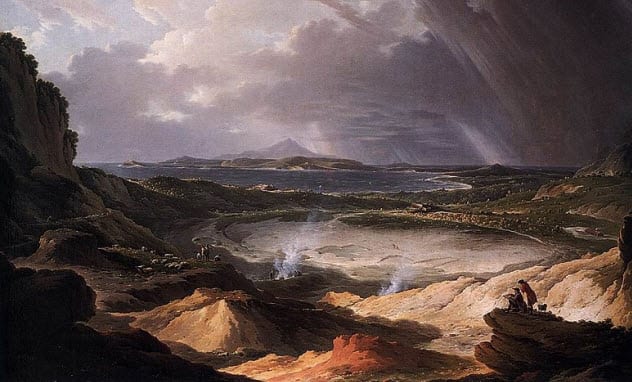 Found near Mount Vesuvius, the Phlegraean Fields were a popular holiday destination for rich noblemen in ancient Greece. The hot springs were a particular attraction despite its dark history as a gateway to Hell.

The medieval author Gervase of Tilbury described the copper-wrought gates of Hell melting into the magma below the fields. The fields were even believed to be the inspiration for the scene in The Aeneid for the descent into Hades.

The Phlegraean Fields actually sit on top of a magma-filled crater. This causes a range of supposed supernatural appearances such as sulfur clouds, hot springs, and bubbling mud pits as the magma swells and recedes again.[9]

1 The Plutonium At Hierapolis 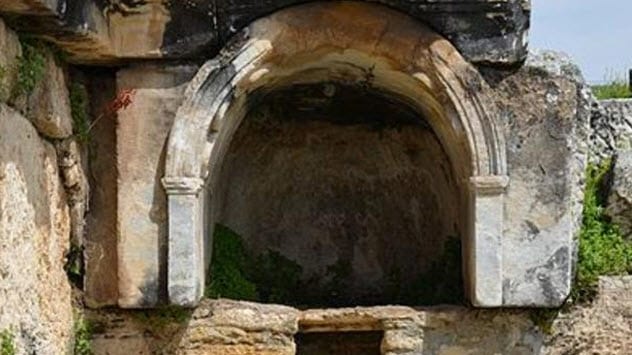 Perhaps the most spectacular gateway to Hell can be found at Hierapolis. Set in what is now modern-day Turkey, the temple at Hierapolis has a stone gate which leads to a cave named Plutonium after Pluto, the god of the underworld.

The gate was known to be deadly. Birds that flew too close to it dropped dead from the sky. Priests were said to lead sacrifices, normally cattle, into the chamber. However, only the cattle would die. The Greek historian Strabo recorded that the priests would put their heads in the cave and return unharmed, a fact that he attributed to their castrations.

The gateway was rediscovered in 2011. Scientists have conducted experiments to find out how the cattle died and why the priests survived. They discovered that the cave was situated directly over a volcanic rift through which carbon dioxide was emitted in a visible mist.

Further experiments showed that the CO2 was more concentrated at different times of the day, meaning that there were times when the priests could enter the chamber in relative safety.

Additionally, carbon dioxide is more concentrated near the floor. So, the cattle, whose heads hung lower, would breathe it in faster than the priests, who may also have stood on something to take themselves out of range of the deadly gas. As the cattle breathed in more CO2, their heads would drop lower. It would kill the animals before the priests were overcome by the fumes.[10]

Read more about Earthly entrances to Hell on 10 Entrances To Hell That You Can Visit and 10 Notorious Gateways And Portals That Might Whisk You To Hell.