Ever ridden the Jungle Cruise and wondered how the skippers can control the boat without looking at the wheel? Ever wondered why you never see a Fantasyland cast member outside of Fantasyland? Disney parks attempt to transport you to different worlds, from the Old West to space to Neverland. But obviously, these parks are visited by thousands of people every day and millions every year, so they need massive amounts of infrastructure to keep guests happy and safe every single day.

To accommodate this, they have created a multitude of ways to hide things from the average observer, despite them being right in front of them. You might be steps away from a large air conditioner that powers a whole land but have no idea because of something as simple as a paint job. 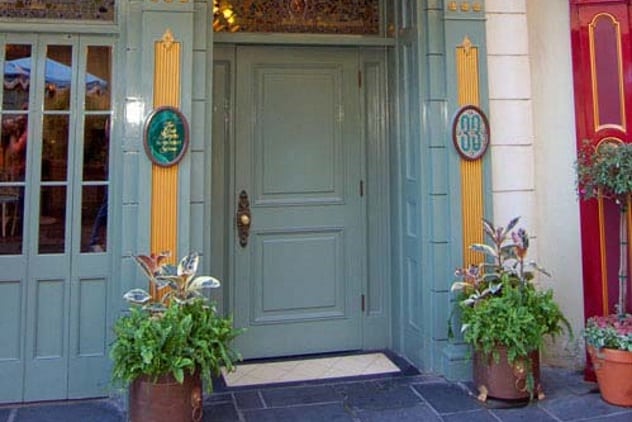 Disney hides a massive amount of infrastructure in their parks, but not all of it is easily obscured from view. If possible, Disney likes to cover things with trees or behind other buildings, but that isn’t always feasible. Some things are just too big or need to be in guest areas for safety reasons. To hide things that have to be in front of park guests for whatever reason, Disney uses a special shade of green that makes things (almost) disappear from view.[1]

This color goes by two names, No See-um Green or Go Away Green, and has been in existence since the early days of the Disney parks. They consider this to be one of the blandest colors in existence, and the idea is that the eye will avoid focusing on it compared to other things in the park. Many things, like pipes, backstage buildings, or the entrance to Club 33, are painted this color to de-emphasize them as best as possible.

9 A Fake Pirate Ship For Fantasmic! 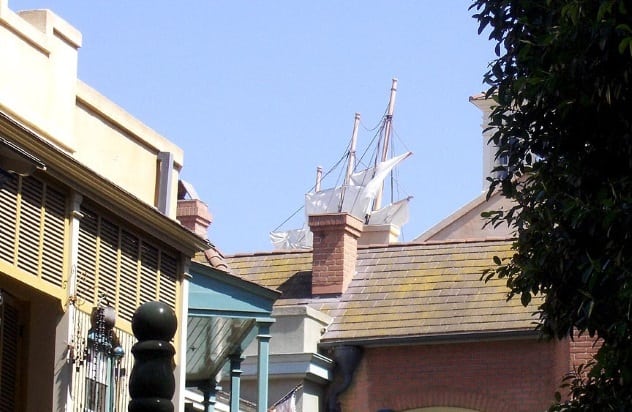 When Fantasmic! was added to Disneyland in the 1990s, they had to use the existing land to fit in a modern show. This land, New Orleans Square, was built with no intention of holding the crowds, lighting, or other infrastructure necessary for a show like Fantasmic!, so it had to be fit in without ruining the land.

One of the main things they had to add was lights for the show. Fantasmic! happens at night and needs to be seen from a distance, meaning massive lights had to be installed. Most were added along the edge of the water, but some had to be added further back, on the building Pirates of the Caribbean was located in. The solution to that was to hide them in false ship masts.[2] These masts give the illusion that a full ship is located behind the land, but in reality, it just hides some of the lights for Fantasmic! In fact, they even add to the theme of the area by making it look like there is really a port just behind the buildings. 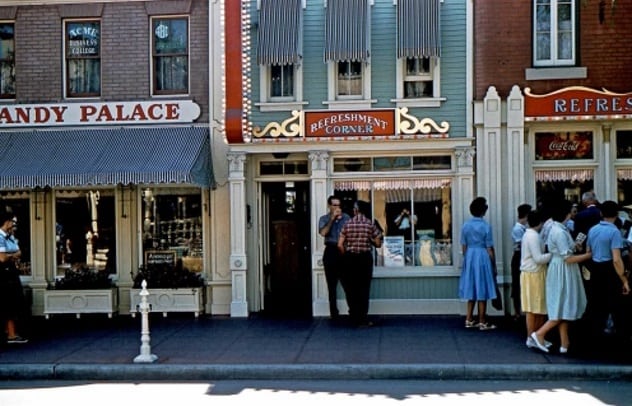 Disney buildings often look massive, but this is not the case. You might look at the towering Matterhorn mountain and think it must be hundreds of feet tall, only to see a bird land on top and look massive compared to the mountain. The Matterhorn is actually only 45 meters (147 ft) tall. In fact, no building in a Disney Park is taller than 61 meters (200 ft) due to FAA regulations that would require a red light to be placed on top of every building that exceeds that height. This would ruin the immersion Disney strives for in their parks, so they make sure in designing new rides that nothing ever reaches that height.

How Disney gets around this is using forced perspective. For example, on Disneyland’s Main Street, every floor on a building beyond the first is built at a smaller scale, so it appears full-sized but actually isn’t.[3] This allows Disney to build mountains like Everest or the Hollywood Tower Hotel without ever passing the red-light height. 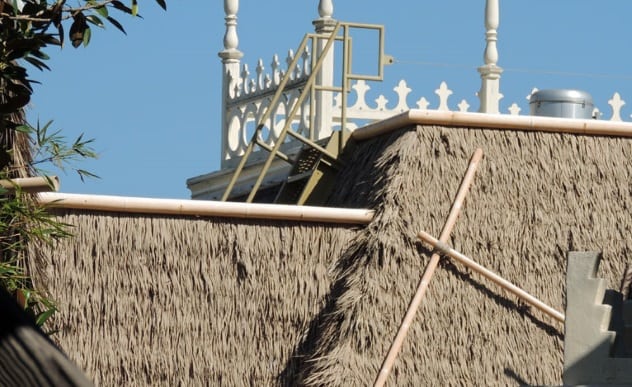 The original Disneyland is so small that it has to be creative with how it uses its space. No area can remain unused for long. One of the main solutions is to use buildings for more than one attraction. Sometimes, this means building up; other times, it means two restaurants sharing a kitchen.

The main example of this is with the Enchanted Tiki Room, the building of which is also used for the Jolly Holiday Bakery, not only a different attraction but in a fully different land.[4] One building is in both the 1920s jungle and a turn-of-the-century American small town. This transition, however, is only seen in a few locations at odd angles. 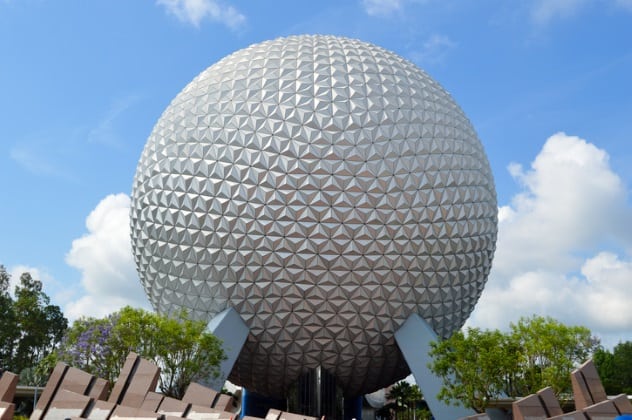 When Epcot was being designed, one of the most important projects was the icon of the park, Spaceship Earth. In designing it, a problem was encountered: When it was raining, what would happen to the water? It couldn’t roll off the sides, as people would be soaked every time they went underneath. Imagine trying to seek shelter from the weather, but to get to the dry spot, you have to pass through a mini-waterfall.

To solve this potential problem, an elaborate drainage system was built into the structure, allowing rain to drain into the nearby World Showcase Lagoon.[5] This keeps the water from soaking people along the sides of the sphere every time it sprinkles and allows for guests to take shelter under the building during a storm. 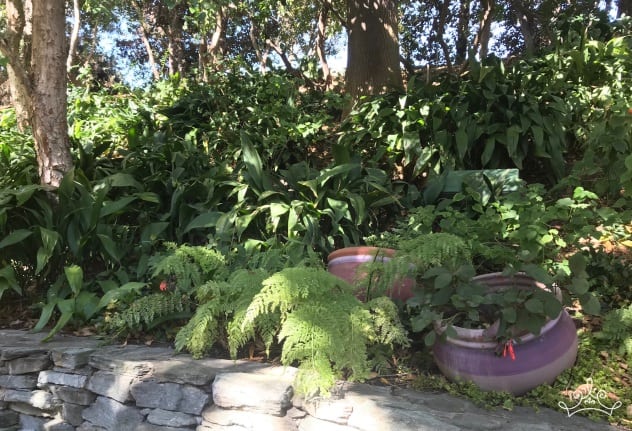 Disneyland, Magic Kingdom, and most of the other castle-style Disney parks around the world feature a berm that surrounds the entirety of the park. This berm keeps you from being able to see the world around the park and helps to immerse you in it.

Disney parks transport you to different worlds, and they don’t want that experience interrupted by the outside world. No seeing McDonald’s from Tomorrowland or Panera Bread from Fantasyland. In most parks, the berm is where the railroad sits, forming the boundary between the park and the outside world.[6] 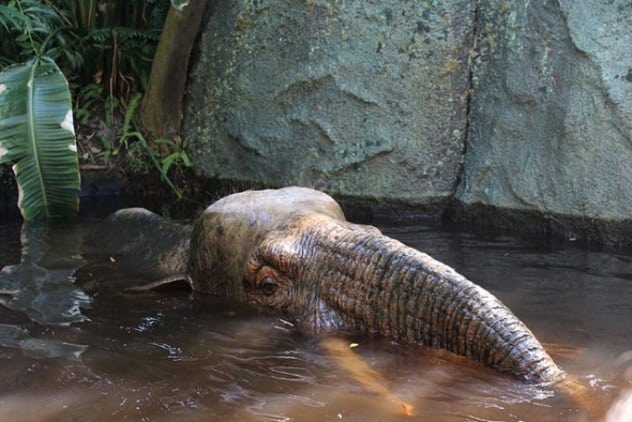 Ever notice how much water there is in Disney parks? Water is one of the main ways for Disney to hide large things in their parks. Most waterways in the park are less than 3 meters (10 ft) deep, but Disney wants the illusion that they are deeper. They dye the water both for that purpose and to hide things like tracks for the rides.[7]

Everything from tracks to filtration systems to fountains are hidden underwater. In many cases, without the dye, water rides just wouldn’t work. Having tracks on Jungle Cruise would ruin the illusion of a trip into a remote jungle, so Disney needs to make sure that you can’t see them. 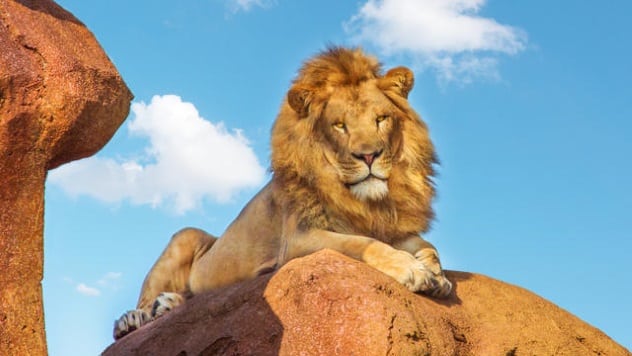 Kilimanjaro Safaris in Disney’s Animal Kingdom is supposed to be the closest you can get to an African safari outside of Africa, and that means making it look like the animals are in their natural habitat. It’s supposed to look like they can roam anywhere, free of human intervention. However, Disney, just like everyone else, has to follow the law. In this case, that means adhering to modern zoo regulations. That’s not a problem for most of the animals, except the ones that might find the guests to be a tasty snack. (We see you, Scar.)

For the lions, this means hiding a massive pit that separates the guests from the lions using rockwork.[8] It keeps you safe without you knowing it’s there. On a side note, the rocks the lions sit on actually have air conditioning systems and can cool the lions down or warm them up, depending on the conditions. 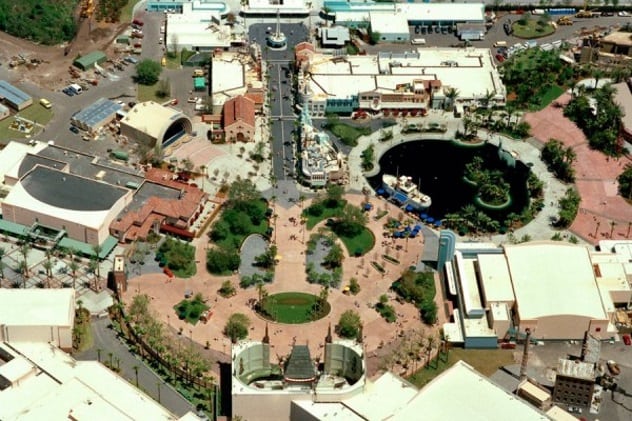 Sometimes, Disney hides things they want you to find. This is the case with countless hidden references and Easter eggs in the Disney parks all around the world. They can reference closed rides, movies, or the people who made the ride possible. Disney loves their Easter eggs. This is also the case with Disney’s Hollywood Studios. The hidden Mickeys that are found in all Disney parks are a primary example of these references.

The entire center of the park is one giant hidden Mickey that can only be seen from above.[9] It is not as clear as it was when the park opened, but since the removal of the Sorcerer’s Hat, it can once again be seen. Planters make up the eyes of the famous mouse. The mouth is a section of darker concrete right in front of the Chinese Theater, and the ears are made of a lake and one of the buildings near Sunset Boulevard. 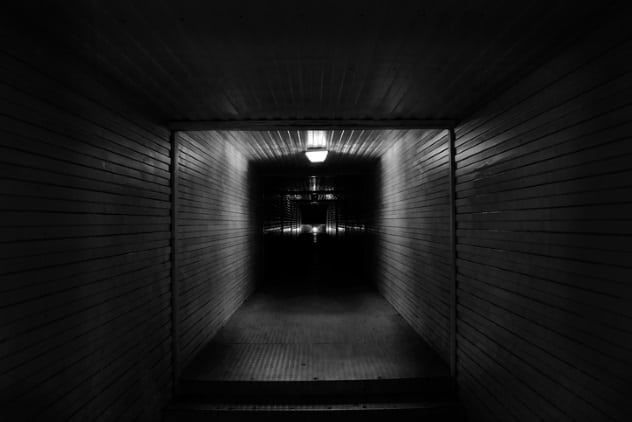 The Magic Kingdom is home to many secrets throughout its attractions, but it is also home to an entire underground network of tunnels connecting the lands to each other so that cast members can exit the park without entering guest areas.[10] You don’t want to see an astronaut from Space Mountain in Adventureland.

This was one of Walt Disney’s personal wishes for the Florida park to make it an improvement upon the original Disneyland. Cast members in the wrong land was a major problem for him, and this was the solution. It was expensive but effective and would even be copied in small amounts for future Disney parks. Some even say the Magic Kingdom is on level two of the park.

Read more trivia about Disney parks on 10 Strange Facts About Disneyland That Will Really Surprise You and 10 Major Malfunctions At Disney Parks.