When someone says the word “unicorn,” most people conjure up an image of a white horse with a golden horn growing in the middle of its forehead. Perhaps they see it frolicking in a medieval garden or sitting in the lap of a flaxen-haired maiden. However, this mythical beast was not always portrayed as a peaceful, horselike creature. 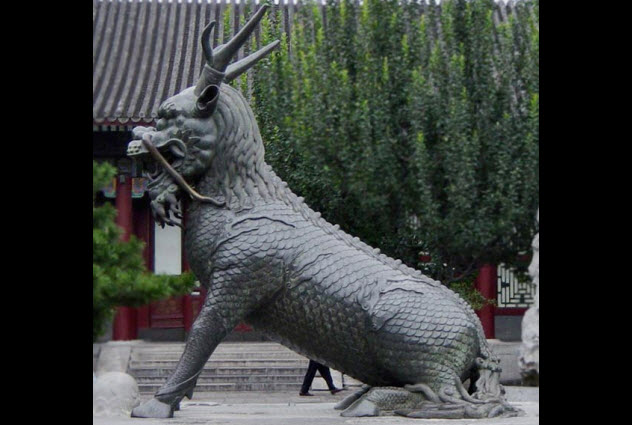 Ki’lin in China and Kirin in Japan and Korea are closely related. Kirin was a fearsome animal that punished the wicked and was said to appear at the birth of a great ruler or a sage, such as Confucius. Resembling a dragon, he was often drawn with scales and with clouds surrounding him.

Ki’lin is the combined name of a male unicorn (ki) and a female unicorn (lin). He’s often described as an animal with the body of a deer, the tail of a cow, and the hooves of a horse, although descriptions seem to vary.

He is sometimes associated with zhi, a one-horned goat that lived during the time of Emperor Shun (2255–2205 BCE), who formulated the first code of law. Gao Yao, the emperor’s adviser, had a wise goat (zhi) that assisted in judicial proceedings. 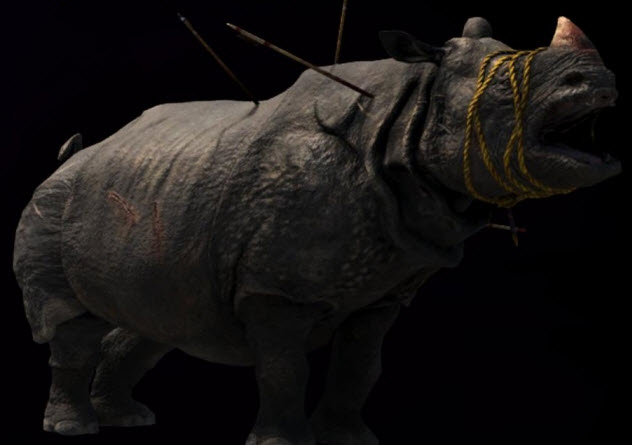 The karkadann (aka the “Lord of the Desert”) is a Persian or Arabic unicorn with strong ties to the rhinoceros. The karkadann was described by the scholar Al-Biruni, who was a native of Uzbekistan, as a dangerous, strong animal with the build of a buffalo and a horn that bent upward, even though the descriptions of the horn and its shape vary.

The Persian physician and scholar Al-Qazwini claimed that the karkadann’s horn could cure lameness and epilepsy, among other ailments, and that it was used in the manufacture of knife handles. Later Muslim writers also claimed that the animal’s horn would sweat in the presence of a poison, even though Al-Biruni had never said this. 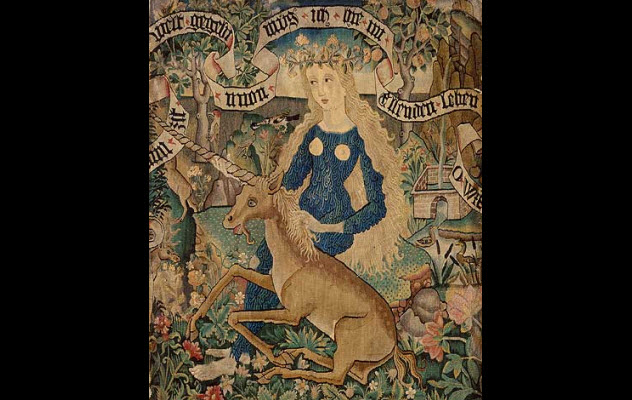 One of the earliest people to describe the unicorn was Ctesias, a Greek physician who traveled to Persia in 416 BC to serve as the court physician to Darius II. During his travels in Persia and India, Ctesias described an animal with a white body, a brown head, and dark blue eyes. Its single horn was pure white with a black middle and a vivid crimson point.

Supposedly, a beaker made from such a horn had the ability to ward off all poisons, and finely ground powder from this horn could help with convulsions or epilepsy. According to Ctesias, this animal was so fast that nothing could overtake him.

The Greek explorer Megasthenes, who was in India as an envoy for Seleucus I, also wrote about the unicorn. Although Megasthenes didn’t see the beast, he included accounts of it in his books. However, it is clearly a secondhand description of a rhino. 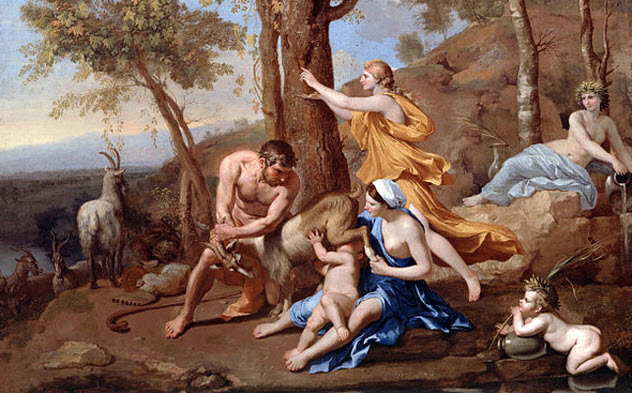 In Greek legends, Amaltheia was the nurse goat of the infant Zeus, even though some of the stories also claim that she was a nymph. When Zeus was born, his mother, Rhea, hid him in a cave in Mount Ida, so his father, Cronus, couldn’t find him and devour him. Apparently, Cronus didn’t want to be a father because he ate all his other children.

Amaltheia nursed the infant Zeus. According to one legend, they were playing one day when Zeus accidentally broke off one of her horns, making Amaltheia a unicorn. Zeus felt bad, so he blessed her horn and it became associated with the horn of plenty, or cornucopia. This horn could be filled with anything a person desired.

For her services to Zeus, Amaltheia was placed among the stars as the constellation Capra (the “goat”) when she died. 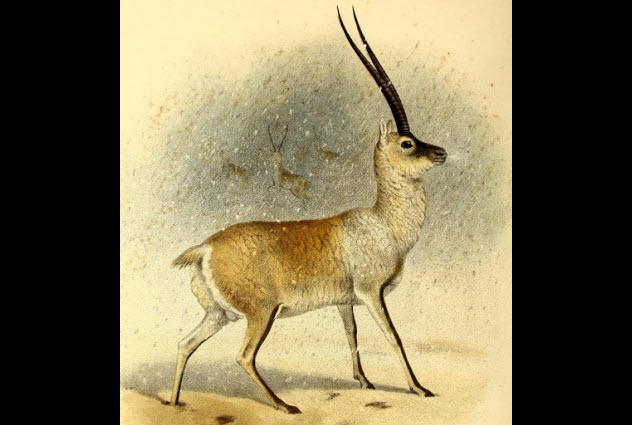 These small, fast antelopes originated in Mongolia and Tibet and are described with either two horns or one. Odell Shepard, a well-known authority on unicorns, described the orongo in his book The Lore of the Unicorn.

Major Latter, who was stationed in Tibet and quoted in Quarterly Magazine in 1820, called the orongo a “one-horned tso’po” and was sure that the unicorn had been found in Tibet at last.

Colonel Nikolay Mikhaylovich Przhevalsky, a Russian geographer and renowned explorer of Central and East Asia, described these animals in his book Mongolia. He claimed that they were sacred to the Mongols and that the lamas would not eat their meat.

Supposedly, the animals’ horns could foretell the future. Pieces of the horns were sold at high prices and carried to other parts of the world by travelers, further propagating the unicorn myth. 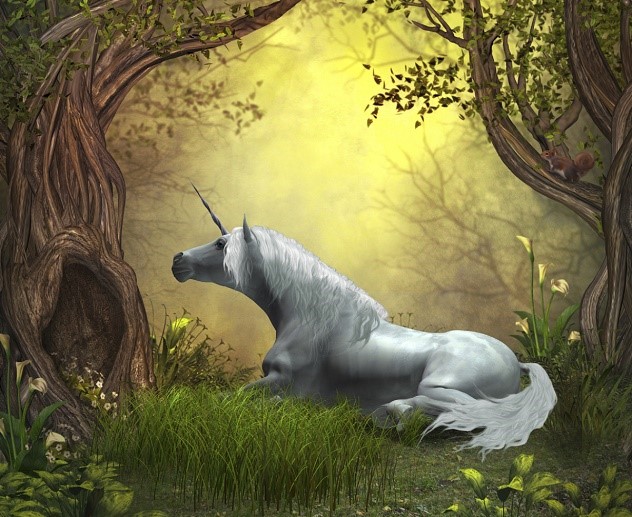 A creature of God associated with Christ’s purity, the essential unicorn as we know him is a pure white horse with a golden spiral horn that has the power to purify water and detect poisons. Commonly, a narwhal’s tusk was sold as an alicorn (unicorn’s horn) to unsuspecting buyers in Medieval Europe, who often paid big money for a fake horn.

In the King James Version of the Bible, the unicorn is mentioned multiple times. In Isaiah 34:7, for example, the passage is especially cryptic: “And the unicorns shall come down with them, and the bullocks with the bulls; and their land shall be soaked with blood, and their dust made fat with fatness.” Scholars now consider the word previously translated as “unicorn” to refer to a type of wild ox, but the mistranslation likely helped the legend grow.

A medieval story tells us that when Adam and Eve were expelled, the unicorn decided to follow them into the world instead of staying where he was comfortable. For this reason, unicorns seemed to be interested in human affairs. 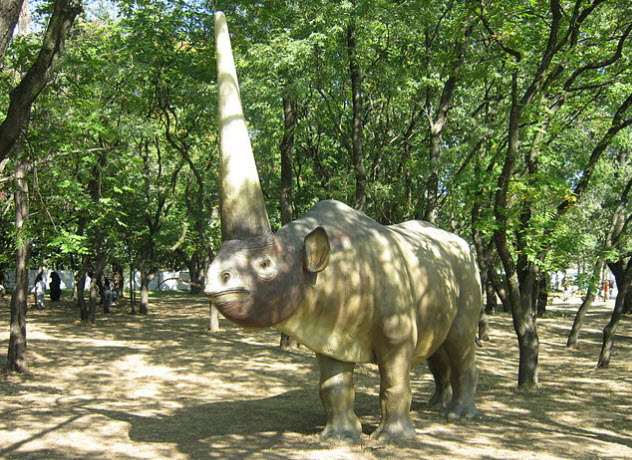 A “real” unicorn came from the genus Elasmotherium, though it is now extinct. It was a rhinolike mammal that lived during the late Pleistocene period. About 5 meters (16 ft) long, he was a herbivore that frequented areas in what is now Russia, Ukraine, and Uzbekistan.

Despite the existence of many cranial remains, scientists cannot agree on the size and shape of his horn. The horns were made of keratin, which doesn’t preserve as well as bone. On the bone of the animal’s skull, there was a round dome where the horn was located on the best-preserved remains.

Elasmotherium’s front feet were larger than the rear ones. The larger feet would have reduced ground pressure, helping the animal to deal with snowy conditions.

There were three species of this prehistoric creature, with the first one appearing in the late Pliocene. He is sometimes associated with the karkadann. 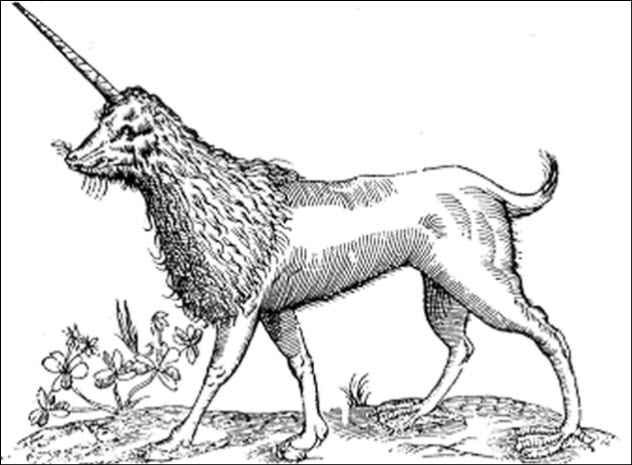 Out of all the unicorns, the camphur is probably the most mind-blowing. Not much material is out there on this amphibious unicorn, which was described as having a horse’s mane, hoofed front feet, webbed rear feet, and a single horn.

Pierre Pomet, a French physician and pharmacist to Louis XIV, showed a drawing of a camphur in his book Histoire generale des drogues (“General History of Drugs”). Pomet also cited another author, Ambroise Pare, a surgeon who served several kings of France. Pare claimed that this unicorn lived in the Arabian Desert and that its horn could cure poisoning.

Later in his texts, however, Pomet noted that much of what was sold as a unicorn’s horn (alicorn) was really the tusk of a narwhal, an animal found off the coast of Greenland. Nevertheless, he still believed in unicorns. 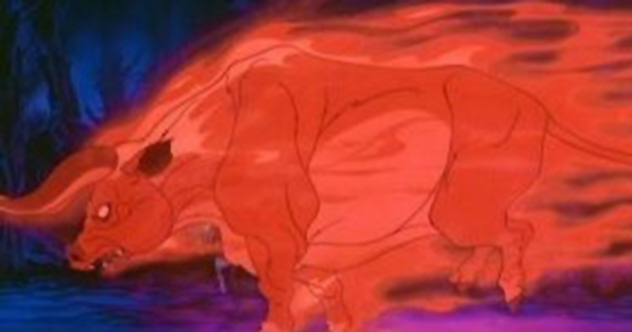 There is a lot of confusion surrounding the khutu. For starters, the spelling for khutu can be ku-tu-si (Chinese), hutu, or chutww. The scholar Al-Biruni claimed that the khutu’s horn sweated in the presence of a poison.

The description of this unicorn varied from a bull to a bird. Some Chinese writers even postulated that the khutu was a 1,000-year-old snake. 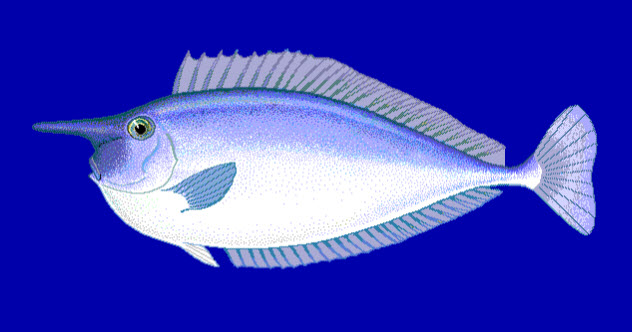 The unicornfish, Naso unicornis, has a single, hornlike protrusion in the middle of its forehead between its eyes, which makes it look like it has a funny little face.

They can be found in the Indian and Pacific Oceans and in the Red Sea. They live mostly in coral reefs and tropical areas of the ocean, although some are also found near Japan and Hawaii. These fish are mainly active in the daytime.

The horn is slightly larger in males than in females. The scientific community is not clear on the horn’s function, but unicornfish do not use it for fighting. They are related to tangs and surgeonfish. They get along with most other fish and like algae.