If you want to step outside your comfort zone, go skydiving. If you want to forget you ever had a comfort zone, buy a ticket to China. If you already live in China, you’re two sentences ahead of me and just a few yuan away from owning some of the most bizarre items ever available on the legal free market. Here are ten of the craziest things you can buy in China. And if you know of anything that can top the items on this list, feel free to put it in the comments. 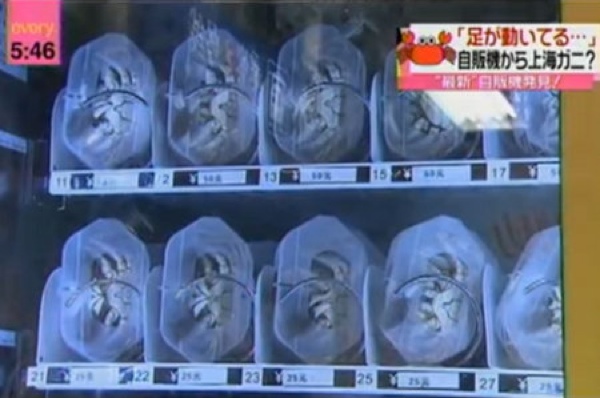 In 2010 the Twin Lakes Crab Co., a Chinese crab supplier, decided that sometimes a grocery store just isn’t convenient enough. So they built a vending machine that dispenses live crabs to be installed in subway stations in the city of Nanjing. Picture a typical snack vending machine, then replace all the chips and cookies with aerated plastic boxes containing living, moving crabs and you’ll have a perfect image of what this looks like.

The crabs are kept at a constant 5 degrees Celsius (41 F), which is cold enough to put them in a temporary stasis, but not so cold it kills them. They sell for the equivalent of about two US dollars, and the bottom row of the machine also offers bottles of ginger vinegar—a combo sort of like ketchup and french fries. 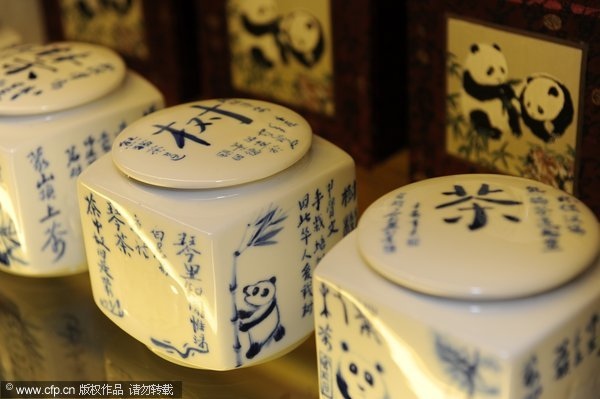 Let’s just go ahead and say it: Panda Tea is a drink made from panda poop, and it’s the single most expensive tea in the world—one dried kilo of the tea will run you about US $77,000. Why would anybody want to drink it? The theory is that pandas really only use about 30 percent of the bamboo they eat, eliminating the rest of the unprocessed bamboo in their fecal matter. It’s believed that, among other nutrients, bamboo contains antioxidants that can prevent cancer, so panda tea is marketed as an anti-cancer tonic and a weight loss aid.

The facility is located in the Sichuan Province, and the owner of Panda Tea, Yanshi An, started his company with 11 tons of dung that he bought from a nearby panda sanctuary.

From noodles to spicy chicken, everything tastes better when it’s prepared by the cold, metallic dicing hooks of a robot. This isn’t just one isolated example, either—it’s three isolated examples, showing a growing trend in robotic food service.

In 2011, inventor Cui Runquan created Chef Cui, a humanoid robot that prepares shaved noodles, a popular noodle variety in China in which the noodles are shaved by hand off a block of dough and then boiled. The robots are being mass produced and sold for the equivalent of US $2,000, and over 3,000 have already been sold.

A fast food chain in Shanghai is also using robots—but this time as the actual chefs. The obvious benefit is the efficiency: one robot can wash a dirty pot, combine the ingredients, cook the dish, and have the finished order on a plate in only three minutes. The downside? Yet one more integration that will make it easier for robots to kill us all.

Finally, if cooking wasn’t enough, you can also go to the Dalu Rebot Restaurant and have your food brought to you by a robot server. The six robots follow a rotation that allows them to serve the restaurant’s twenty-one tables before returning to the kitchen to refill their trays. 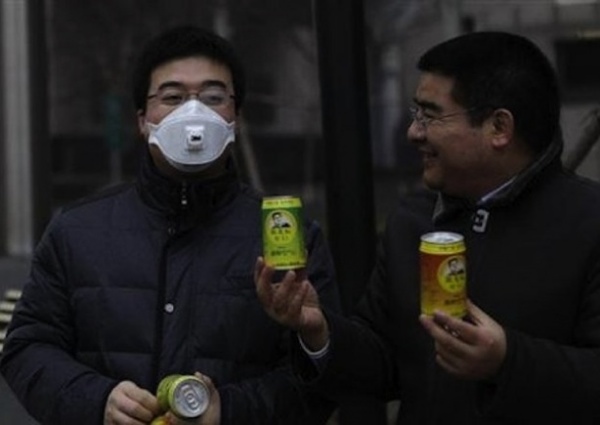 If you want a breath of fresh air in China, it’s going to cost you about five yuan. That’s how much Chen Guangbaio is selling his new line of canned air for, which is literally a soda can filled with air. This product is part publicity stunt and part environmental statement on Chinese air pollution, which is now so bad that the haze is visible from space in some areas of the country (seriously).

For the purest air, you can pick up a flavor called Pristine Tibet, and if you’re feeling nostalgic you can buy Revolutionary Yah’an or Post-Industrial Taiwan flavored air. 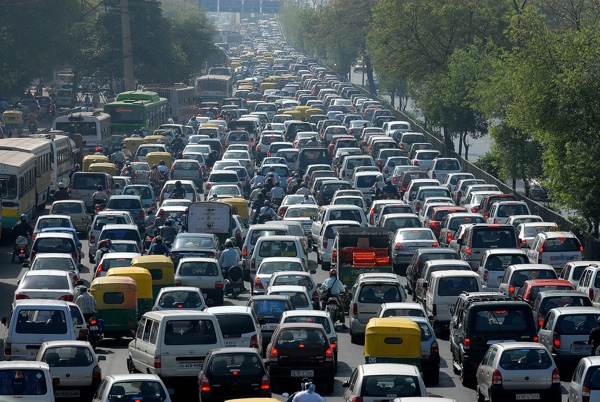 For a country with 1.3 billion people, it’s not surprising that China sometimes has some pretty long traffic jams—sometimes lasting for weeks. But a few entrepreneurs have turned lemons into the Chinese version of lemonade by offering a service that provides a person who will actually sit in your car for you while it’s stuck in traffic.

It works like this: If you find yourself stuck in a gridlock, you can call the service, tell them where you are, and wait for two men to arrive on a motorcycle. The stand-in will sit in your car, and the motorcycle driver will take you anywhere you need to go. The service is mostly offered around Wuhan in Central China, which typically has some of the worst traffic in the country. 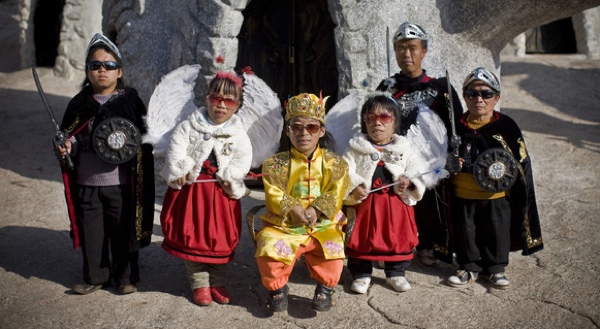 The Kingdom of the Little People is sort of like a cross between a theme park and the Shire—located in the Yunnan Province, it encompasses 13,000 acres set aside to build a miniature world that will be populated exclusively by dwarfs and open for tours like a safari. Don’t bother reading that sentence again; it’s even more offensive the second time.

The brainchild of entrepreneur Chen Mingjing, the Kingdom of the Little People is still being built, but already has over 30 tiny cottages to house the dwarfs and a parody presentation of Swan Lake, which is now open to the public. Although a lot of people are offended by the idea, Chen claims that it will provide people with permanent job opportunities when they would otherwise struggle in a difficult economy, and many of the residents of the Kingdom are proud to be part of the community. 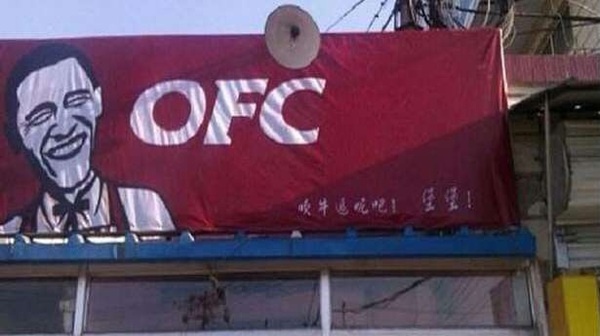 From morally ambiguous dwarfism to vaguely racist copyright infringement, China truly has it all. In 2011, a businessman in Beijing opened China’s first OFC—Obama Fried Chicken. The restaurant uses a KFC-styled banner and logo complete with a cartoonishly grinning caricature of Barack Obama and sells fried chicken.

Believe it or not, this isn’t actually the first Obama Fried Chicken to grace the planet—or the first time China has used Obama’s image to sell chicken. The first OFC opened in Brooklyn in 2009, but closed down a short time later. And in a completely unrelated stunt, the official KFC in China released this ad in 2011 which features an actor who looks like Obama giving a speech before being crushed by a giant chicken sandwich. There’s some sort of message here…but we’re totally not spelling it out. 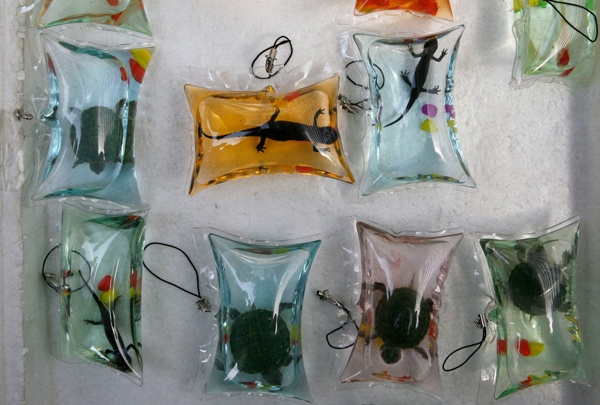 Arguably one of the oddest things you can buy in China is a tiny live animal on a key ring. The animals—usually a miniature Brazilian turtle or a kingfish—are enclosed in a small bag or plastic bubble that is filled with a nutrient-rich liquid that’s supposed to be able to feed the creature for up to three or four months.

Of course, the sealed container raises a lot of questions about how the animal is supposed to get oxygen, and several animal welfare services in China have understandably raised a public outcry that call these trinkets a particularly severe form of animal abuse. One of the reasons people buy them is for good luck, but supposedly many people will buy one just to set the animal free. 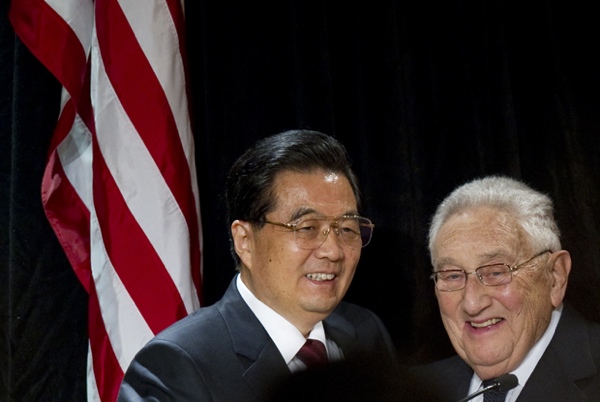 At the risk of sidestepping premise for a second here, you can’t actually buy white people in China—but you can rent them, which is close enough. Chinese businessmen will often rent white actors to stand beside them at important events and, well, that’s about it.

The idea is that Western businesses are successful (China’s words, not mine), and so for a Chinese businessman to be seen with a guy who could be an overseas business partner is a symbol of status and prestige. Sometimes the actor just stands there, sometimes he gives a speech, and sometimes he’ll be given a small role to play, complete with fake business cards. One actor named Jonathan Zatkin was paid to give a speech for the opening of a jewelry store and describe “how wonderful it was to work with the company for 10 years.”

According to Zatkin, “The requirements for these jobs are simple. 1. Be white. 2. Do not speak any Chinese, or really speak at all unless asked. 3. Pretend like you just got off of an airplane yesterday.”

1
Tea Picked By The Mouth Of A Virgin 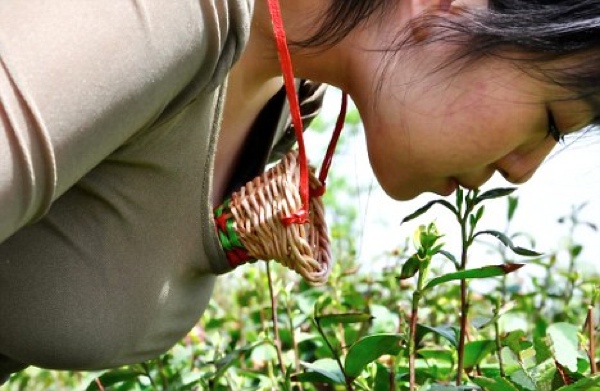 Here’s a fun sentence: The Jiuhua tea plantation in the Henan Province hires virgins with C-cup breasts to pick tea by grabbing the leaves with their lips and then dropping them into a wicker basket nestled between their breasts.

The women can not touch the leaves or the basket with their hands, and in addition to specifically requesting C-cup breasts, the plantation also requires that the women have no visible scars or wounds. According to the spokesperson for the company, this odd requirement comes from a legend about how the tea used to be picked by the mouths of fairies. With this method, the tea is supposed to be infused with the virility and purity of the virgins, which is then passed on to the person who drinks the tea.