Since grunts and growls can only convey so much information, animals have devised many unconventional modes of communication. Fortunately, the work on their dictionary is well underway. Each advance takes us one step closer to finding out all the nasty things that animals say behind our backs.

Dholes, also known as Asiatic wild dogs, appear to be the result of a canine-vulpine Disney romance. These supremely adaptable fox-wolves are surprisingly resilient and have carved out niches in almost every biome, from Himalayan alpine regions to dense rain forests in Java.

Dholes live in packs of 5–12 and stereotypically display joyful sentiments with wagging tails. They’re sociable carnivores and sometimes form 30-member super packs to keep it fresh and gain the acquaintance of other groups.

Unlike their relatives (wolves, jackals, foxes, etc.), dholes employ a unique mode of communication: whistling. Since each animal commands up to 90 square kilometers (35 mi2) of land, they rely on sounds that travel well to holler at their canid pals across great distances.

The dhole’s verbal arsenal includes an assortment of whistles, clucks, and high-pitched shrieks that one would never expect from anything cute. In addition to just saying what’s up, the disconcerting dhole calls are used to coordinate cooperative assaults on much larger, tastier prey, such as buffalo and reindeer.

Gorillas Sometimes Hum When They Eat, And Researchers Want To Know Why – Newsy

Apes are credited with a variety of adorable behaviors, and now we can add humming to the list. Researchers have recently noticed that wild male gorillas enjoy a good meal by humming a tune. This behavior has been observed in captive primates but not in wild gorillas, which don’t have time to mess around.

Humming is mostly displayed by dominant silverbacks as a call to dinner. Through melody, the group leader decides on mealtimes and implores his posse to the table—especially the females, who love a musical man.

Advertising a meal is not limited to gorillas; chimps and bonobos have proven themselves to be noisy eaters as well. In fact, researchers can discern primate social structure based on the most voluble members. For example, the less rigidly hierarchical chimps and bonobos are collectively noisy as there’s no central control for dinner plans.

Humming can also signify a happy primate. Gorillas have a decent vocal range and combine varied hums into continuous tunes. These melodies indeed ring louder when a gorilla encounters his favorite foodstuffs. Check them out here for some Muzak between species. 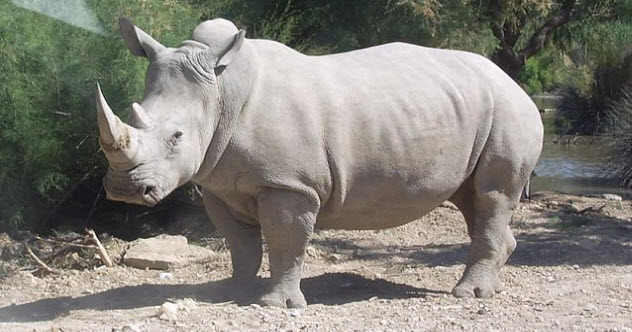 For all their hulking, hidebound mass, white rhinos are notoriously poor at actually seeing things. To supplement their lousy eyes, evolution has gifted them with an acute nose, which they use to take long, contemplative drags from steaming dung piles left by friends and rivals.

Yes, poo is a rhinoceros business card. A white rhino may spend only 20 seconds working over a familiar turd but one entire minute considering a stranger’s bouquet.

Unlike other animals that poo on the go and think nothing of it, the majestic white rhinos keep communal dung piles (“middens”) that are often revisited and refreshed. This serves to mark one’s territory and also to leave a surprisingly detailed personal account, via chemical cues, of one’s “status” and health.

Females also leave behind the scent of fertility. The middens are a rhinoceros Facebook for individuals trying to hook up, rediscover old friends, or assert dominance over a territory and its fecund maidens.

7 The Syntax Of Black-Fronted Titis 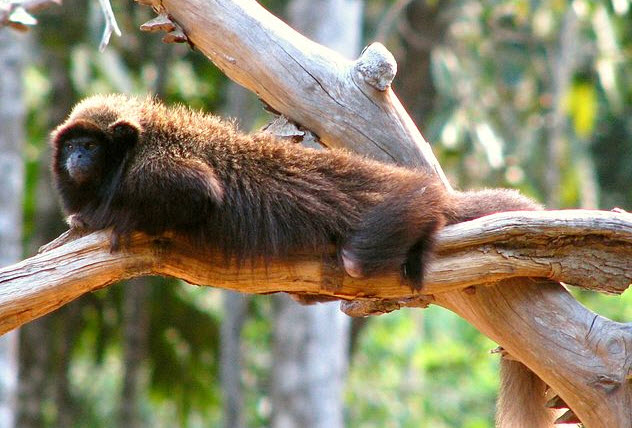 In the sweltering rain forests of southeastern Brazil, you may find the hilariously named black-fronted titi. Ironically, these New World monkeys aren’t black-fronted at all—it’s more of a mousy brown. Semantics aside, they’re indispensable to primatologists for their informationally dense alarm calls.

These tiny monkeys are among a select few that have figured out syntax and can combine different units of language into “sentences.” The squeaking titis have separate alarm calls for ground- and sky-based predators.

A call that rises in pitch signals an incoming caracara (long-legged hawk), but a fading call means that predatory cats are prowling about the feet of trees. Despite how clever these monkeys are, researchers decided to put them in their place.

The scientists threw a stuffed caracara and a stuffed oncilla (miniature leopard) into the titi habitat at a Brazilian nature reserve to try and fool the silly monkeys. It failed. The monkeys quickly adapted by creating new calls, mixing airborne and terrestrial warnings to signify the stalking birds and flying cats. 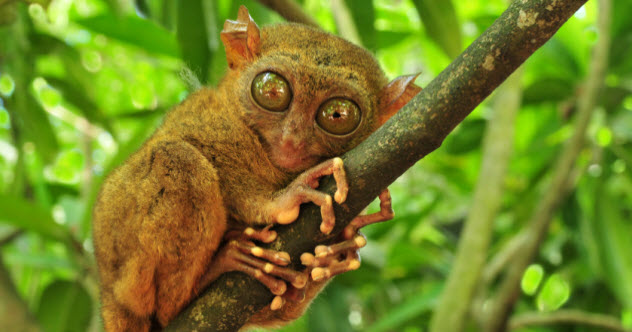 Lucky to top out at 13 centimeters (5 in) tall, the bug-eyed tarsiers of Southeast Asia are among the world’s smallest and oldest primates. The teacup tarsiers have changed so little over the past 45 million years that they’re considered a biological time capsule.

With those extraterrestrial eyes, tarsiers also boast the mammal kingdom’s most prominent eye-to-body ratio. The superlative tarsiers are among the quietest primates to boot.

At least, that’s true for those of Bornean and Philippine descent. Curiously, other types of tarsiers are notoriously gossipy. Furthermore, these shy variants have made an odd habit of opening their mouths as if to speak but remaining silent, possibly to tease us. So researchers hypothesized that all tarsiers are equally garrulous but that some use inaudible (to us) channels.

Sure enough, a “bat detector” picked up a barrage of communication in the ultrasonic range. Through some unconfirmed laryngeal acrobatics, the tarsiers put out pure ultrasound at 70 kilohertz, safely above the human limit of 20 kilohertz. Impressively, the tarsier audible range extends to 91 kilohertz.

A truly useful, unique adaptation among primates, it’s like a “private chat” that prey and predator are unable to localize. Researchers have slowed down a tarsier call eightfold and reproduced it for human hearing. But be sure to turn your volume down.

Whales are wonderfully social and equally splashy—annoyingly so for the researchers tasked with identifying them by their seemingly identical flukes. Taking a hint from the sperm whales, scientists are now attempting to identify whales by their names and accents.

Researchers found that Caribbean sperm whales live in smaller family units than sperm whales abroad, allowing for easier identification. After studying over 4,000 calls recorded from 2005 to 2010, researchers learned that the individuals in cozy nuclear families use a unique combination of clicks (a “coda”) as an audible name tag.

In addition to introducing themselves singly, whales also use family calls that all members share. However, researchers are not able to discern these less specific calls because they do not vary like the individual names. These broader call signs are apparently handy when separate groups meet and need to rep their hood.

To demonstrate the breadth of cetacean languages, whales also employ more inclusive regional codas, which probably amount to something like “Hello, I am also a whale.” 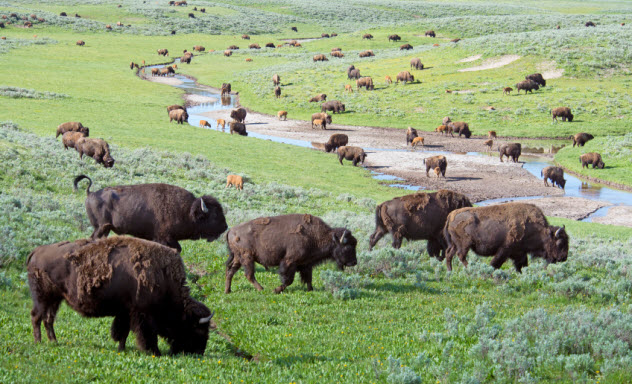 After stalking a large herd through the Monts d’Azur Biological Reserve for three months, Amandine Ramos from the French National Center for Scientific Research learned that European bison are exceedingly democratic—proving definitively that France is the mother of democracy.

At first glance, bison communication is expectedly primitive. They snort and produce guttural noises but mostly rely on ephemeral pheromones to dictate carnal relations. All the more surprising then that these big dopes are capable of voting, although they reserve this for the most critical of decisions, such as what to have for lunch.

When choosing a new pasture to graze in, bison will shift their bodies in the direction they’d like to explore. Gradually, the bison orient themselves toward their preferred destinations until an exceptionally intrepid member makes a move.

If his peers agree, the herd will follow and everyone’s happy. If not, the herd will splinter for a short while but eventually succumb to majority rules. In the end, the leader with the most followers—often a female—wins out and the gang reunites. 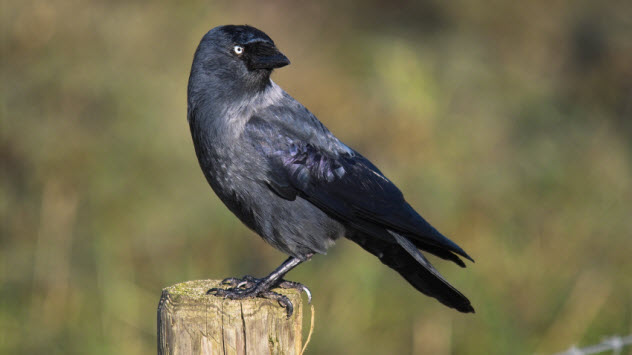 Eye contact is common primate behavior but was assumed to be unique to humans, monkeys, apes, and their taxonomic kin. Then a few years ago, researchers unexpectedly found that jackdaws protect their turf with a dirty look.

Normally, birds don’t do this. Their eyes are not positioned for staring. But jackdaws are special. Instead of building homes, they nest in natural tree cavities that become hot commodities in areas with dense jackdaw populations. Thus, the birds find themselves in plenty of scuffles after disturbing cavities that have already been claimed.

However, as members of the crow and raven family, jackdaws are also resourceful and use hard gangster stares to deter potential nest jackers. Unlike most birds with plain black or brown eyes, jackdaws have brilliantly pale irises.

To ascertain that the eyes are used in communication, Cambridge researchers bugged each of 100 nesting boxes with one of four pictures: a jackdaw’s face, a black-eyed jackdaw’s face, a disembodied jackdaw eye, or a featureless black image. Jackdaws reliably avoided the boxes containing bright-eyed faces. They were less likely to land and much quicker to move on.

Blue-capped cordon-bleu songbirds are such good dancers that we didn’t even know they could dance. These birds are well-known to science, but their speedy feet move too quickly for human detection. For a long time, their dances were assumed to be some weird form of ornithological jumping jacks.

The slick foot movements were discovered unexpectedly when Hokkaido University researchers studied the cordon-bleu courtship process at 30 frames per second and then at 300. Slowed footage revealed that tapping is most common when both the male and female share a perch.

Scientists suggest that the tapping adds a percussive element to the act that males use to woo lovers, which includes songs, head bobs, dancing, and baton twirling. According to lead researcher Masayo Soma, it’s an inspiring piece of multitasking and the first jointly performed avian “multimodal dance display.”

Interestingly, females respond by dancing for their suitors—although with reduced, wavering intensity. On the other hand, males go all out and manage as many as 200 steps in a seemingly impossible five-second span.

The eyes of mantis shrimps might as well be extraterrestrial technology because they’re closer to satellites than natural peepers. These incredible eyes are equipped with up to 16 color receptors, while humans are limited to three. Even so, the color vision of mantis shrimps is surprisingly poor compared to other animals. So what gives?

For one, their eyes are an incredibly sophisticated system to detect ultraviolet light. Better yet, mantis shrimps are privy to circularly polarized light, an amazing ability that humans may borrow one day to detect cancerous cells.

Sick cells reflect light in a way that healthy cells do not. The right type of sensor could prematurely reveal the telltale sheen inherent to malignant tissues.

But what does this do for the animal?

The shrimps (which are more like fabulous lobsters) are marked with patterns that are visible only to those that also dabble in circularly polarized light—i.e., other mantis shrimps.

When presented with a choice of burrows, the normally aggressive stomatopods preferentially choose one that does not reflect circularly polarized light. This means that it is not already inhabited by another mantis shrimp.