We like to think we know about the animal kingdom; fish swim, birds fly, and rabbits multiply. But there are some animals that are not what we expect them to be. They defy the logic of what we expect of them or of animals in general.

The following animals are the very definition of odd. And you don’t even need to embark on an arduous, trying expedition to see some of them. They are all around us, and we have probably seen some without even realizing.

10 The Fish That Doesn’t Swim 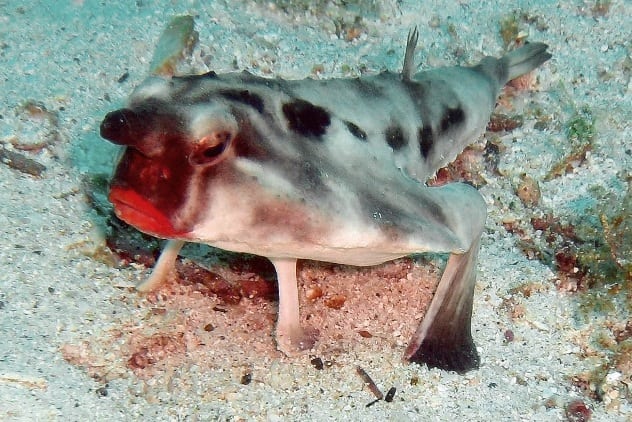 Common logic has it that a fish should be able to swim. Well, there’s one that can’t swim (or, at least, can’t do so very well). Enter the red-lipped batfish (Ogcocephalus darwini ). The red-lipped batfish is found in the waters off the Galapagos Islands, where it walks on the seabed instead of swimming like other fish. Even the walking motion has been described as being more of a stagger than a walk.[1]

9 The Snake That Resembles An Earthworm 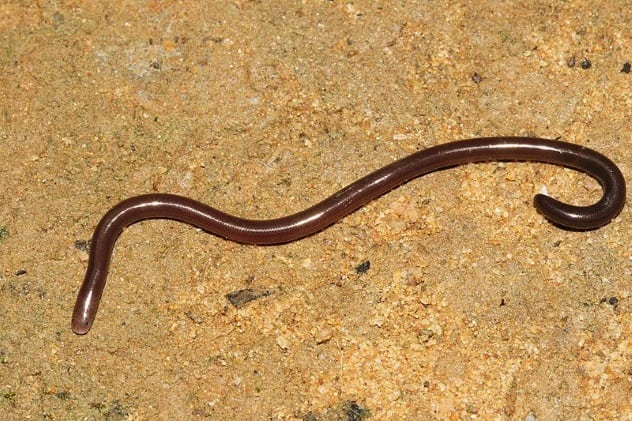 Most people who have seen the brahminy blind snake (Indotyphlops braminus) do not know they have seen it. This is because it resembles an earthworm. It has been introduced in most parts of the world, which means a good number of us may have seen one without even realizing. Fear not, though; they are not venomous.

The brahminy blind snake is native to Southeast Asia, from where it spread to other parts of the world. It is usually found in the soil and under rotting leaves and logs. It is also found in gardens, flower beds, and flower pots. In fact, it is believed to have been unknowingly exported out of Asia while living in flower pots. This is why it is also called the flower pot snake.

Like all snakes, the brahminy blind snake is covered in shiny scales. It has a pair of eyes, which are barely visible, and a tiny tongue. It will usually stick out this tongue when held. It does not have a segmented body like earthworms and cannot stretch or contract like earthworms. The snake feeds on ants and termite eggs and grows to between 6.4 and 16.5 centimeters (2.5–6.5 in) in length.[2]

8 The Dog That Doesn’t Bark 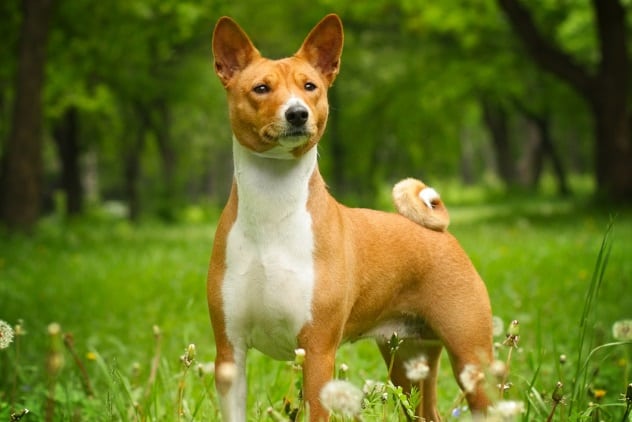 Again, common logic has it that dogs bark. Enter the Basenji, which doesn’t bark. It is nicknamed the barkless dog for this reason. It can howl, shriek, cough, and make a yodel-like sound, but it doesn’t bark. The dog, whose name translates to “bush thing,” was first bred in ancient Egypt. It later made its way to the Congo, where tribes used it for hunting. This is why it is sometimes called the Congo Terrier or the Zande Dog.

The Basenji was first exported to England in 1937 after series of failed attempts to export it in the 19th and 20th centuries. It made its way to the US thereafter. In the 1980s, more Basenjis were exported from Africa to breed with the Basenjis overseas, which were already suffering from hereditary issues caused by the limited gene pool. Interestingly, this breeding produced a brindle color, which was not seen in Basenjis beforehand.[3]

7 The Fish That Lives On Land

The Pacific leaping blenny (Alticus arnoldorum) is a fish that lives exclusively on land. While we have mentioned fish that are fond of leaving the water to hunt for animals on land in an earlier list, those fish still return to the water from time to time. It seems like the Pacific leaping blenny did not get the memo. It exclusively lives on land and detests the water so much that it flees from the smallest of waves. Whether it is afraid of water or just hates it, we do not know.

The Pacific leaping blenny has gills for breathing in water but has evolved to breathe through its skin when on land. There is a caveat, though. The skin has to be moist. The fish keeps its skin moist by rolling in the puddles that form by the shoreline. This is the reason why it just hangs around rocks and caves by the ocean and does not stray far away. They can be found on the rocks around the island of Guam.[4]

6 The Mammal That Lays Eggs 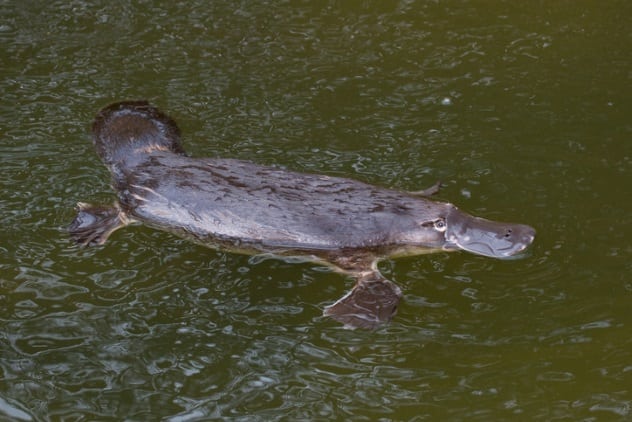 The first scientists to analyze a specimen of a platypus (Ornithorhynchus anatinus) thought it was a fake. And it’s not hard to see why. The platypus looks like a mashed-up cross between a duck, beaver, and otter. It has a bill, webbed feet, a tail, and a body covered with thick fur. It also lays eggs, making it one of the only two mammals that do so. The other is the echidna.

To complete the weirdness, the males produce venom, which they release from their rear leg spurs. Scientists have sequenced the DNA of the platypus and discovered that it contains the DNA of birds and reptiles. They also discovered that it has ten sex chromosomes, five X and five Y. For comparison, we humans have just one X and one Y chromosome in males. This means the platypus, theoretically, should be able to have produce 25 different sexes, although it only has two.[5] 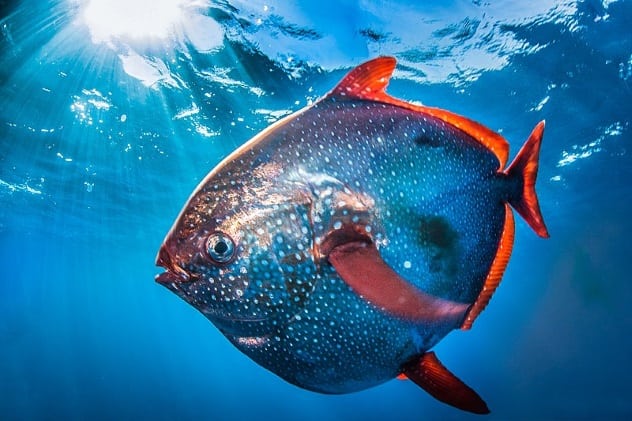 Fishes are known to be cold-blooded animals. So imagine how astounded researchers were when they found a warm-blooded one. Introducing the opah (Lampris guttatus), aka the moonfish, which is the only warm-blooded fish we have found. The discovery was made by researchers with the National Oceanic and Atmospheric Administration (NOAA).

While other fish take the temperature of their environment, the opah is able to regulate its own temperature by constantly flapping its pectoral fin. It also uses a counter heat exchange method that allows it use the warm deoxygenated blood leaving its gills to warm the cooler oxygenated blood flowing into its gills.

The result is that the opah can dive to deeper depths than many other fish. It can also remain down below for a longer period of time, unlike other fish, which will need to rise closer to the surface to keep their organs working. The opah is also able to swim faster and see better and has a faster reaction time than other fish.[6]

4 The Lizards That Do Not Have Legs 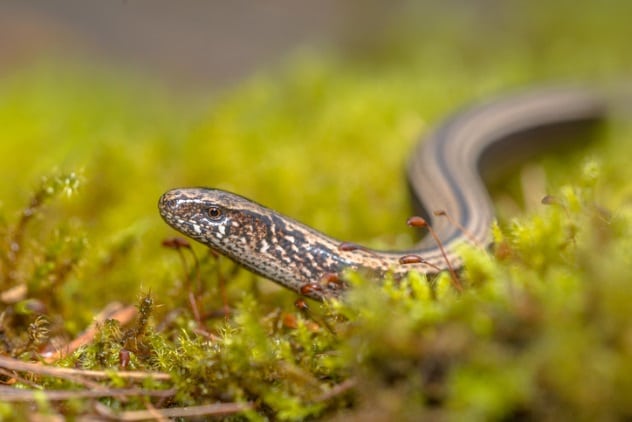 Try recalling the lizards you are familiar with, and you will realize they all have four legs. This is even though there are lizards that do not have legs. Most people confuse these lizards for snakes, even though they are not. Legless lizards evolved from legged lizards and have characteristics similar to them.

Legless lizards and snakes have some things in common, though. They both have scales and forked tongues. They also eat eggs and small animals like mice, though the legless lizards have a limit to what they can swallow because their jaws are not flexible like snakes. However, some species, like the Burton’s legless lizard, have flexible jaws and can even hiss and kill by constriction, just like snakes.

On the other hand, legless lizards have eyelids and ear openings, while snakes do not. They also move with their sides and cannot move with their belly scales like snakes. This is the reason why legless lizards cannot move on smooth surfaces. Legless lizards have longer tails than snakes and can even shed them when threatened. The shed tail often breaks into more than one piece, a sight that has been compared to shattering glass, which is why they are also called glass lizards. Snakes cannot shed their tails.[7]

3 The Animal With The DNA Of Plants, Bacteria, And Fungi 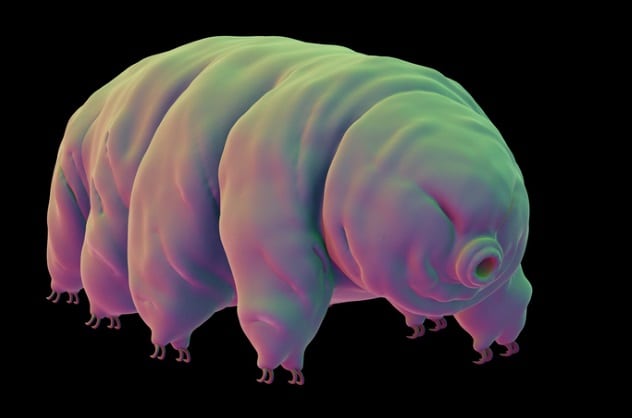 The tardigrade, aka the water bear, is a microscopic animal famous for its ability to withstand the harshest conditions. It is found from the depths of the coldest oceans to the summits of the highest mountains to the sands of the hottest deserts. It will even survive the radiation of space and can be brought back to life with the addition of water, even if it has been dried out for decades.

Scientists looked into the DNA of the tardigrade and discovered that 17.5 percent of it is from plants, bacteria, and fungi. The presence of bacteria DNA is believed to be the reason it can survive extreme conditions. While some animals have showed up with the DNA of other organisms, the proportion of the tardigrade is pretty high. Only the microscopic rotifer comes close at nine percent. The mystery that remains unsolved is how the tardigrade makes the foreign DNA work with its own.[8]

2 The Snake That Flies

Technically, the flying snake does not fly. It glides. But its ability to effortlessly glide from tree to tree is the reason it’s called the flying snake. Five species of related snakes have been identified as flying snakes. All belong to the Chrysopelea genus and are found in South and Southeast Asia.

True to their gliding nature, the flying snakes live on trees, from which they glide to other trees or the ground. They are able to glide to nearby trees up to 24 meters (79 ft) away. To glide, the snakes flatten their bodies the moment they jump from the tree. Then they glide through the air by moving the front part of their bodies in a side-to-side motion while moving their tails up and down.[9] 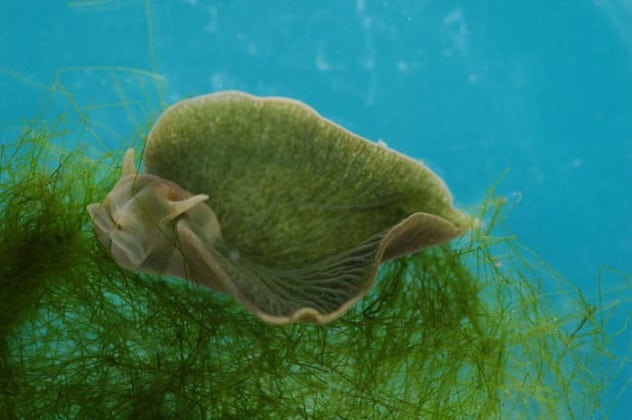 We all know that plants create their food from carbon dioxide and water with the aid of sunlight through photosynthesis. What we do not know is that an animal has learned to use photosynthesis to create its own food. Introducing the green sea slug (Elysia chlorotica), one of the few animals with the ability to photosynthesize.

Found in New England and Canada, the green sea slug resembles a cross between a sea slug and a plant, thanks to its top rear that resembles a leaf. The leaflike look is the product of feeding on algae. The sea slug somehow managed to take the genes from the algae, which is how it can create its own chlorophyll for photosynthesis. This means the slug can continue to exist even if it does not eat.

Researchers at the University of South Florida, Tampa, who have been studying the slugs for over two decades, captured some and put them in an aquarium. They observed that the slugs continued to live for months without feeding, provided they were exposed to 12 hours of light a day. The slugs were also able to pass the chlorophyll gene to their offspring, although the offspring were unable to perform photosynthesis until they fed on algae to get chloroplasts, which are also necessary for photosynthesis.[10]

Read about more of the world’s bizarre animals on 10 Weird Self-Inflating Animal Species and 10 Animals With Odd Evolutionary Leftovers.