Finicky gods and malevolent ghouls plagued the ancient world. But humanity struck back. Equipped with nothing more than hand-hewn trinkets and the wild imaginings of a prescientific age, we fought magic with magic.

In spite of their naturalistic savvy, ancient Egyptians didn’t hesitate to fall back on magic to solve life’s niggling inconveniences. Many of their hexes are lost to history, although we’ve recovered others in excellent condition, including the 1,300-year-old A Coptic Handbook of Ritual Power.

The collection probably served as some acolyte’s pocket spell book and is also rich in lore. Among other things, it describes an invocation of Baktiotha, an ambivalent mystical figure of divine influence that presided over a congregation of serpents. The codex also speaks of Seth, the third son of Adam and Eve.

Jesus also features throughout the handbook. Researchers assume that it was penned sometime in the seventh century by the Sethians, a sect of Christian heretics that plied their mystical trade as the fledgling religion spread through the region. 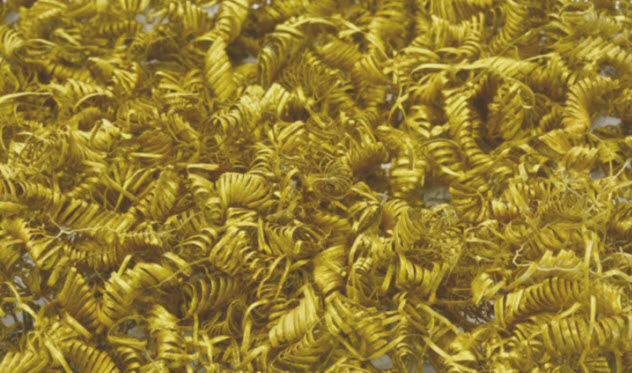 Gold took advantage of humanity’s fascination with all things shiny to become history’s most prized commodity. From gilded tombs to ritual figurines, the rare metal has graced every type of relic that we can imagine. And some that we can’t.

Recently, archaeologists found a head-scratching horde of 2,000 small golden spirals in a field on the Danish island of Zealand. This same Boeslunde site previously turned up several less mysterious golden goods including bracelets, bowls, and rings. This suggests either an affluent ancient outpost or history’s first rapper.

The spirals are dated to between 900 and 700 BC, and that’s about all we know. The Danish National Museum’s Flemming Kaul hazarded that the spirals might have adorned ceremonial regalia. 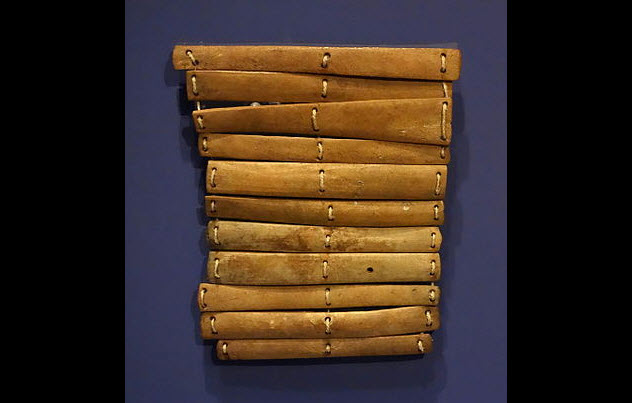 Like real-life video game equipment, archaeologists have found a set of armor crafted from the bones of slain animals. Possibly, it’s the work of the Samus-Seyminskaya people, who stubbornly inhabited Russia and Central Asia’s Altai Mountains thousands of years ago.

At some point, they migrated to what is now the Siberian city of Omsk, where the armor was unearthed at a famous site that regurgitated a variety of settlements and burial grounds dating from the early Neolithic to the medieval periods.

The armor is between 3,500 and 3,900 years old and is possibly cursed. Yet in spite of its age, it was found in “perfect condition”—a phrase never before used in the field of archaeology. However, “perfect” may be somewhat misleading because bits of it had to be glued back together. It’s currently in convalescence, undergoing careful restoration.

According to its discoverers, this armor must have been impossibly valuable to its creators and considered “more precious than life.” It probably belonged to some elite warrior, but archaeologists have no idea why anyone would bury such a unique piece of gear.

The armor is extremely rare. Nothing else like it has been found in Omsk, suggesting that it originated as a spoil of war from some far-off region. 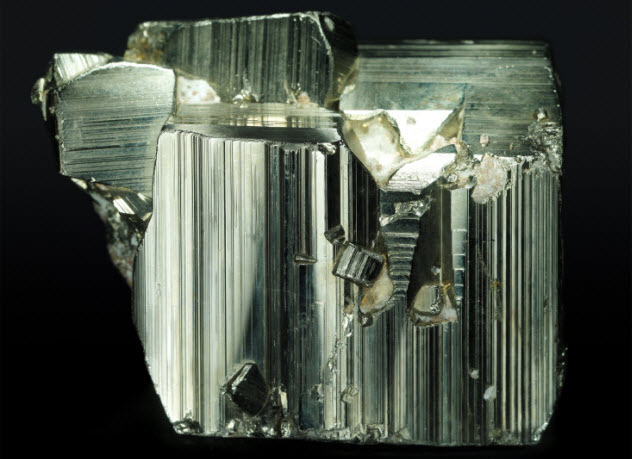 The Mesoamerican people revered mirrors as portals to alien dimensions. Reflective surfaces are ubiquitous nowadays, but the indigenous artisans of 1,000 years ago would have toiled for up to 1,300 hours (160 days) to produce a simple hand mirror.

Researchers exploring Mesoamerican influences in North America found more than 50 of these mirrors in Arizona, most of them at a site called Snaketown. The abundance of mirrors suggests that Snaketown was a well-to-do burg that was inhabited by society’s privileged members.

Unfortunately, the mirrors were in rough shape. As sacred belongings, they enjoyed cremation and interment along with their owners. Thankfully, eagle-eyed researchers cobbled together the charred remains. They ascertained that mirrors were made of pyrite (fool’s gold) and emblazoned with art.

As pyrite was unavailable then to people who lived in what is now Arizona, the presence of pyrite and some design clues suggest a Mesoamerican manufacturer. Researchers aren’t sure if there was a direct link between Arizona and Mesoamerica, though, and contend that pyrite may have arrived after hopping between several intervening cultures. It could have also arrived on the backs of nomadic hunter-gatherers.

Archaeologists recently discovered a giant monolith where no giant monolith should be—off the coast of Sicily. Likened to the Stonehenge slabs, the Sicilian stone sits at a depth of 40 meters (130 ft), weighs almost 15 tons, and measures 12 meters (40 ft) in length. More impressive still, it’s at least 9,300 years old—nearly twice as old as Stonehenge!

The monolith proves that Mesolithic populations didn’t mess around with architecture. However, its purpose is unclear. Is it a single piece of something much larger? Or a stand-alone structure, possibly a primitive lighthouse or a stopper for anchoring ships?

It’s obvious that its production required a herculean effort, but it doesn’t match nearby stones. So it must have been cut elsewhere, extracted from its parent rock, transported from afar, and maybe even erected. Stranger still, the monolith, now split in two, is marked with three holes for no discernible reason.

How it found itself on the wrong side of the sea level is less of a mystery. It once stood on Pantelleria Vecchia Bank, an island in the Sicilian channel. But as the last ice age waned, water levels crept higher and higher until an epic deluge submerged the once-proud monument. 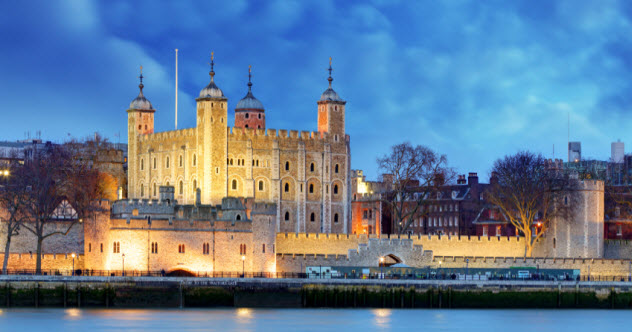 Imposing its stony will from the north bank of the River Thames, the nearly 1,000-year-old Tower of London has welcomed many prominent guests in its lifetime, including the crown jewels and Guy “Guido” Fawkes. It’s also protected by magic.

One portion of the compound called the Queen’s House seems out of place. Unlike the rest of the rocky fort, this residential-style extension was built by Henry VIII in the 16th century and held Anne Boleyn before her execution. But it’s definitely not haunted because its former inhabitants made sure to ghoul-proof their new address.

A squad from the Museum of London Archaeology found 54 magical marks throughout the residence. Most are black, vertical markings that are 3–7 centimeters (1–3 in) in length. They are burned into the timbers supporting the roof. These simple blessings were inscribed to repel all forms of danger, including those of the natural world like fire and lightning.

Archaeologists also found several demon traps, including a depiction of a net. Another trap was a circular symbol called a hexafoil because the not-very-clever, old English demons supposedly would follow a circle’s contours forever.

The former proprietors also stuffed one chimney void with a haul of random items, including assorted animal remains, leather strips, and a broken blade.

Uninhabited Bla Jungfrun has been an island of ill repute and a witches’ haven since the Mesolithic period. Located off Sweden’s eastern shoulder, Bla Jungfrun’s mystical terrain is dotted with malefic boulders and partitioned by uncaring cliffs. Combine that with total isolation, and it’s easy to see why 9,000-year-old black magic practitioners preferred this as the unholiest witching site.

Past archaeological surveys have turned up all sorts of oddities, including several hand-altered caves that hosted unknown spooky rituals. Altar-like structures are also common. Acolytes presumably left offerings there to appease their deities and wizard-gods.

Based on the orientation of the cave’s entrance and the hollows found within, researchers posit that the area served as an auditorium. Onlookers stood on an outcropping with a perfect view of the “stage” below with its roaring fire and indigenous ceremonies, including one that involved chipping into the cave wall with a tool. Possibly, this was an acoustic accoutrement to the psychedelic visuals.

3 The Silver Scroll Of Jerash

Through the wonders of CT scanning and 3-D modeling, researchers have peeked inside an ancient scroll to reveal its story without damaging the fragile relic. It’s a small silver sheet rolled safely inside a small amulet, where it slept untouched for well over 1,000 years until it was fished out of a ruined house in 2014.

The hopelessly shriveled scroll has revealed an intriguing story of wizardry. About 1,300 years ago, an unnamed sorcerer arrived in the colonnaded city of Jerash seeking Bronze Age assistance for some undetermined, possibly monster-related problem.

Digitally unrolled, the scroll presented its mystical contents—17 lines of magic inscribed in a combination of decipherable Greek as well as pseudo-Arabic text that has stumped everyone so far.

It’s probably utter jibberish that was invented to impress the multitude of illiterate customers seeking bargain spells to cure their ills. It could also be a lame attempt by some Jewish or Greek sorcerer to appease a patron who speaks Arabic. 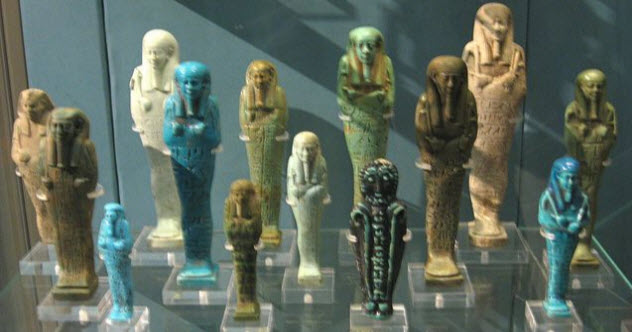 While the media portray voodoo dolls as an invention of voodoo, these figurines were actually a tenet of ancient Egyptian magic. The fate that befell a manufactured figure was believed to also befall the person whose likeness it represented. As such, small effigies were produced and hexed to induce a variety of ailments—from curses to enchantments of love.

The famed ushabti dolls were created for such a purpose and buried with their human charges. The Egyptians knew that Osiris, god of the dead, would often call on the departed to assist in post-mortem municipal projects. The urge to dodge one’s duties transcends the fleeting world, however, and these ushabti figurines could be called upon to do one’s work.

The ushabti were available for purchase at temples. Some exceptionally lazy but wealthy individuals were found buried with an ushabti for every day of the year. We can assume that Osiris wasn’t pleased.

Cyprus is the legendary birthplace of the Greek goddess of fertility, and the city of Paphos was the headquarters for the cult of Aphrodite, a group of followers devoted to getting freaky. This UNESCO World Heritage site is rife with aged mosaics and the remnants of grand Mycenaean temples dedicated to the lady of love and her subordinate sex deities.

Now Paphos has coughed up another wonder—a 1,500-year-old, coin-sized clay amulet. It bears a Greek palindrome on one side and a mythical party scene on the other. The 59-letter palindrome reads: “Yahweh is the bearer of the secret name, the lion of Re secure in his shrine.”

The other side features a baffling menagerie of deities and beasts, including Egyptian death-god Osiris, Hellenistic god of silence Harpocrates, a bird, a snake, a crocodile, and a dogheaded being called a cynocephalus.

As amazing as the amulet is to us, its creator appears hilariously deficient in mythology. The amulet is riddled with errors: misrepresented gestures, the omission of Harpocrates’s lotus flower, and an accidental mummification of the cynocephalus.