The mystery of death weighs heavily on humanity. Its universality and inevitability are only a couple of the notes in this primeval siren’s song, a song to which we start dancing the moment we are born.

This fatal attraction has taken many forms throughout history. The ancient Egyptians had the most famous cult of death, but lesser-known faces of death are also displayed in ossuaries, charnel houses, crypts, and catacombs around the world. 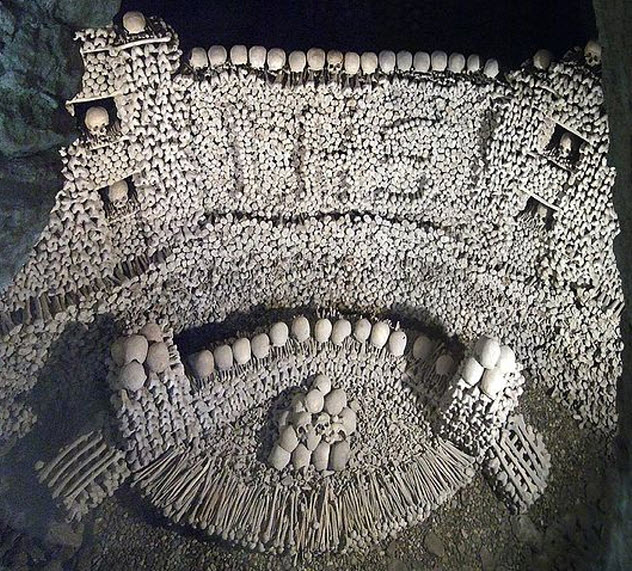 The small town of Eggenburg, Lower Austria, houses one of the most unique charnel houses in Central Europe because of the completeness of its contents. Even so, this is one of the least known charnels. Many tourists pass through Eggenburg without experiencing it.

However, if you are planning a visit, you should temper your expectations. The view is truly humbling, but you can only enjoy it from a platform above the pit that contains the bones. Although visitors are not allowed to enter, it is still worth the trip even if you only see the structure through plexiglass.

Of the skeletal remains of the 5,800 individuals deposited there, 2,200 can be traced back to medieval times. Studies conducted on the skulls of this latter group have revealed that 410 showed a wide variety of injuries and 430 displayed various pathologies.

As a result, this charnel house is more than a simple tourist attraction. 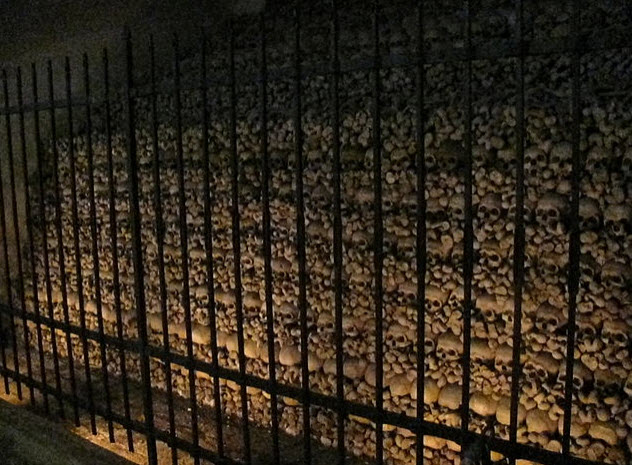 St. Florian Monastery’s existence was first documented in the early ninth century. It has housed the Canons Regular of St. Augustine’s order since 1071. It was named after St. Florian who died a martyr in the Enns River in 304 and later became the patron saint of firefighters.

This monastery has much more to offer visitors than just an ossuary. It also has one of the oldest libraries in Austria—with 150,000 volumes. The most precious possessions are 800 medieval hand scripts, a collection of altar panels (1509–1518) by Albrecht Altdorfer, and Imperial Chambers.

The Collegiate Church attached to St. Florian Monastery houses an ossuary and a crypt where the coffins of former abbey provosts are stored. Also, the coffin of the famous composer Anton Bruckner lies beneath the 18th-century organ.

In the background, as many as 6,000 bones belonging to early medieval Christians can be seen. Although the discovery was made in 1291, these Christians were supposedly buried there during the time of the Romans. 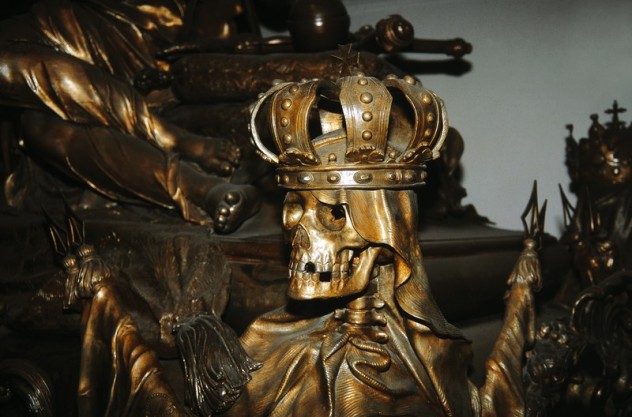 The Imperial Crypt or Capuchin Crypt has served the Habsburgs as their final resting place since 1633. In total, 12 emperors and 19 empresses were buried beside many other members of the Habsburg dynasty.

Among the more famous names from the crypt are Marie Theresa, Joseph II, Franz Joseph, and Franz’s wife, Elisabeth. The coffins were placed there over a period of 300 years. They offer a valuable historical and artistic perspective on the burial cult of the Habsburgs. Some of the sarcophagi are eerily beautiful while others, like that of Joseph II, are strikingly simple.

In the 1960s, the Children’s Columbarium was arranged inside the crypt to enclose 11 prematurely dead children who were the sons and daughters of Ferdinand III and Leopold I. This stands as a testament to the high mortality rates of those times as well as the inbreeding practiced by the Habsburgs. 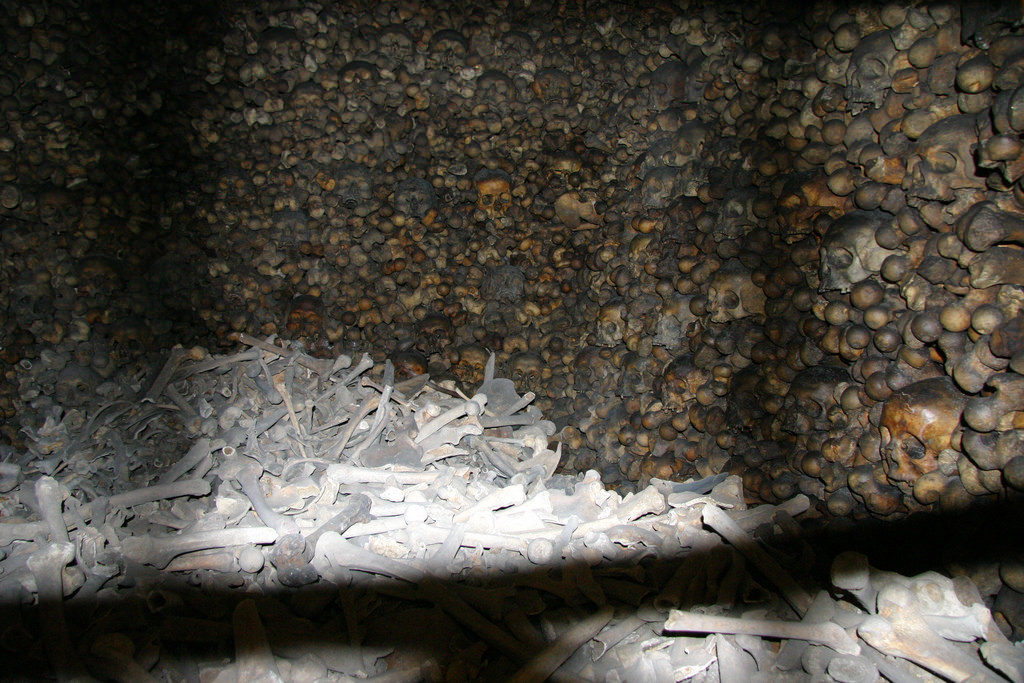 St. Stephen’s Cathedral towers over the many earthly remains hidden in its catacombs and crypts, including the Bishops Crypt, the Provosts Crypt, and the Ducal Crypt. These crypts are the final resting place of priests, bishops, and archbishops who served in the cathedral.

Although the bodies of the Habsburgs were stored at the Imperial Crypt, their hearts were sent to the Augustinerkirche and their organs to St. Stephansdom. These crypts also hold the body of Eugene de Savoy. A crucifix over his tomb depicts Christ with a beard made of real hair.

During the 1735 outbreak of bubonic plague in Vienna, the cemeteries near the cathedral and the charnel house were closed. Bones from these areas were moved into the catacombs beneath the cathedral.

As a result, the bones of around 11,000 people were piled high in over 30 rooms. In 1783, the catacombs were closed when a law was passed which prohibited most burials inside the city. While Mozart’s body was blessed in St. Stephen’s Cathedral, he was buried in a common grave in St. Marx Cemetery. 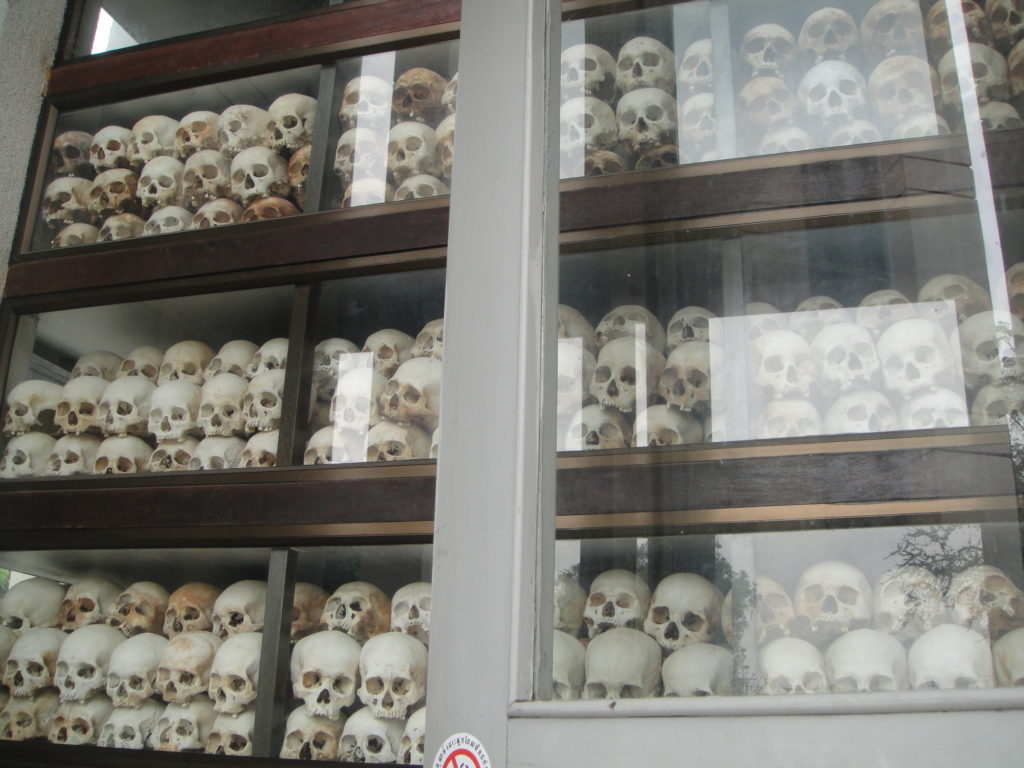 Filled with skulls, the large glass Memorial Stupa is part of the Choeung Ek Center for Genocide Crimes, which is located 15 kilometers (10 mi) southwest of Phnom Penh.

This site was originally a graveyard. During 1977–78, it served as a place for both killing and burying the victims of Pol Pot’s purges. During the Khmer Rouge regime, more than 17,000 people died there.

The Memorial Stupa was designed by architect Lim Ourk and built in 1988 to commemorate those killed in the atrocities. In Buddhist cultures, a stupa is a sacred structure containing the earthly remains of highly regarded individuals. It can be also viewed as a tower connecting the world of the living to the dead.

Most of the people who were buried in mass graves on these grounds were transported from the secret S-21 Khmer Rouge prison facility. The Tuol Sleng Museum of Genocidal Crimes, another important memorial site, is located on the prison grounds.

St. James Church contains the relics of St. Clementine-the-Martyr, but its ossuary and crypt are more popular with visitors. Also known as the Capuchin Monastery Crypt, it holds the skeletons and mummified bodies of numerous monks and benefactors. The natural conditions offered a suitable environment for the mummification process.

The remains collected from the middle of the 17th century until the end of the 18th century are arranged in a variety of ways. Some simply lie on the ground while others are in coffins with glass tops. In 1784, an imperial edict prohibited further burials in the crypt for fear of disease.

In 2001, the ossuary was rediscovered during archaeological and underground surveys conducted for the renovation of Jakubske Square. Several rooms were filled with piles of human bones, sometimes reaching the vault arches. The 50,000 people buried there were victims of plague and cholera epidemics as well as the Thirty Years’ War and Swedish sieges. 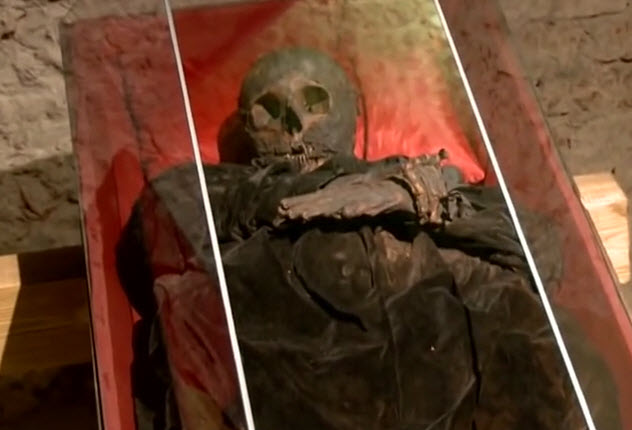 The catacombs of Klatovy stretch beneath the Church of the Immaculate Conception & St. Ignatius. Between 1676 and 1783, more than 200 people were buried there—mostly members of the order and benefactors.

The natural conditions of stone crypts are sometimes ideal for the preservation of corpses. The air-conditioning system and the constant temperature of 15 degrees Celsius (59 °F) found at Klatovy favored the mummification process. 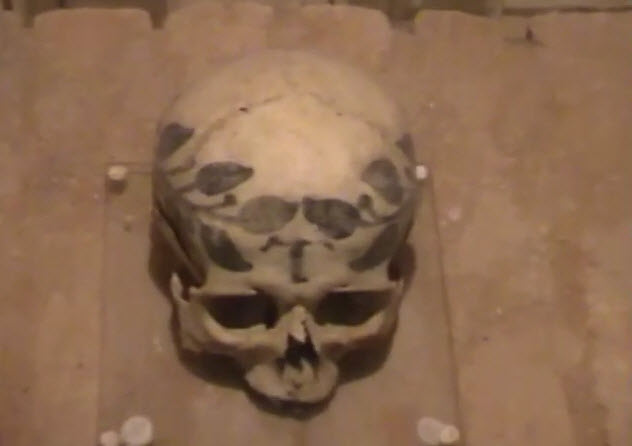 The Moravian Karst holds the ancient pilgrimage site of Krtiny. This small town is northeast of Brno and is known as the Pearl of Moravia. In 1991, an important discovery was made when an ossuary was brought to light underneath the Baroque Church of St. Mary.

This stunning church is just one of the numerous constructions in Moravia and Bohemia designed by the famous architect Jan Santini-Aichel. But the ossuary is not the only thing that lures people to the Church of St. Mary. It also has a fabulous Gothic statue of the Virgin Mary and a carillon.

The ossuary contains the remains of more than 975 individuals who were inhabitants of the village, hermits living nearby, and pilgrims who died on the site. Twelve of the skulls were painted with the letter “T” and laurel wreaths. These bones date from the late 13th century to the mid-18th century.

Melnik, a one-hour drive north of Prague, is positioned in the center of Bohemia’s wine-growing territory. Among the most popular tourist attractions are the Renaissance Melnik Chateau and a sinisterly beautiful ossuary.

The chateau has been open to the public since 1990 and offers two tour options. You can visit several rooms of the castle, which are filled with artifacts and works of the Old Masters, or you can take a closer look at the wine museum in the cellar. Either way, it will be a memorable experience that leads to the ossuary.

The old crypt of the 15th-century Church of Sts. Peter and Paul was later turned into an ossuary. After a 16th-century plague, many corpses were dug up and deposited beneath the church. The skeletal remains of more than 10,000 people were stacked in various patterns. Visitors can gaze at this monument of death while walking on a floor of beaten earth. 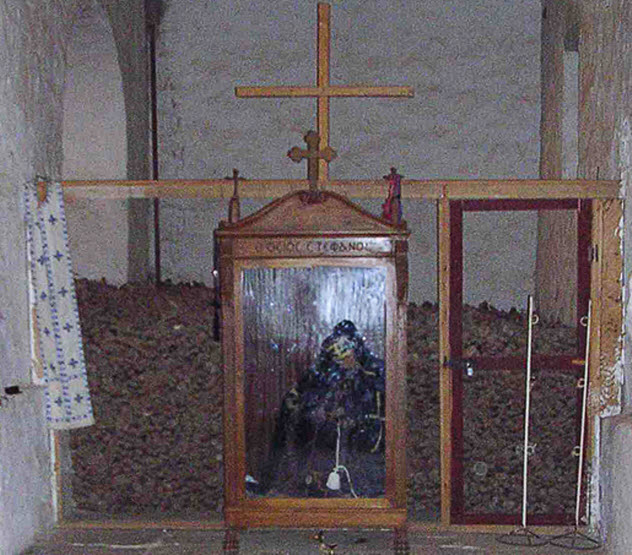 The Charnel House of St. Catherine’s Monastery is filled with the bones of monks. These are sorted into separate piles of skulls, arms, hands, legs, and feet. The skeleton of sixth-century monk St. Stephen the Porter, dressed in a purple robe and holding a staff, sits amid these scattered bones.

According to a common Greek practice, when a monk dies, his body is buried in a nearby cemetery. At the same time, the oldest corpse in that cemetery is exhumed and the bones are moved to the charnel.

Actually, St. Catherine’s Monastery is an important sacred place to three world religions: Christianity, Islam, and Judaism. Built in the sixth century by Emperor Justinian I, the monastery is still functioning today. This makes it the oldest Christian monastery that still fulfills its initial function.

It is famous for containing the Chapel of the Burning Bush, the Mosaic of the Transfiguration of Christ, and a library containing old Christian manuscripts. Also, the orthodox monastery sits at the foot of Mount Sinai, where Moses received the Tablets of the Law according to the Old Testament. St. Catherine’s Monastery is a UNESCO World Heritage Site.

10 Terrifying US Government Projects Carried Out On Domestic Soil