Many taxonomic orders are fairly well known, even among the general population. Beetles, for instance, are the order Coleoptera. All spiders belong to the order Aranea, while flies are Diptera and moths and butterflies belong to Lepidoptera. Some orders, however, are highly obscure and unusual, even if they might exist right under your nose. 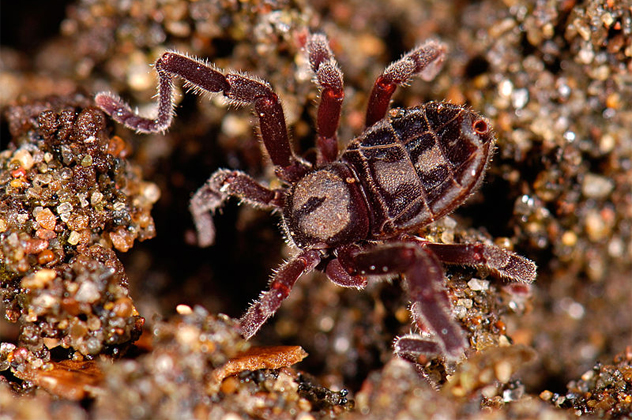 A “tickspider” sounds like a frightening animal, but the Ricinuleids are neither venomous predators nor disease-spreading bloodsuckers. These tiny creatures can only be found in the damp, moldy leaf litter of tropical forests. Their name comes from their spider-like shape and flattened, leathery bodies, along with a hinged panel, or “hood,” that completely covers their faces.

While their ancient ancestors had eyes, modern tickspiders have a few light-sensitive cells in their place. Ricinuleids prey on smaller invertebrates, especially mites, and the female seems to carry just one single egg at a time beneath her hood. Otherwise, we know very little about the habits of these reclusive, ancient organisms. 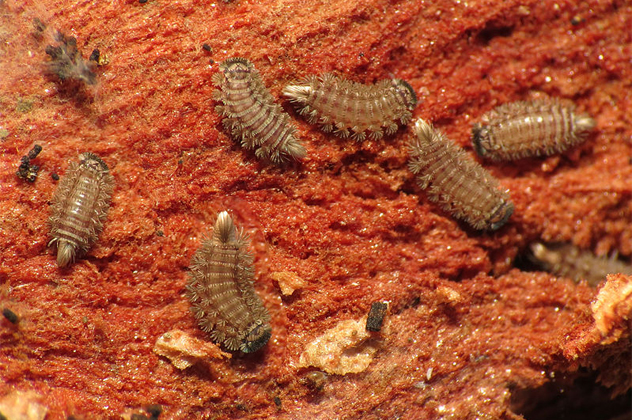 Though they can be found almost everywhere in the world, these unusual millipedes are rarely noticed and usually mistaken for an incredibly tiny, hairy grub or caterpillar. Unlike their larger, well-armored millipede relatives, the bodies of Polyxenida are soft and squishy, but their stiff bristles offer protection from predators. The tuft of bristles on the “tail” are even lined with microscopic barbs, which can tangle the jaws of attacking ants or other insects like a bundle of barbed wire. 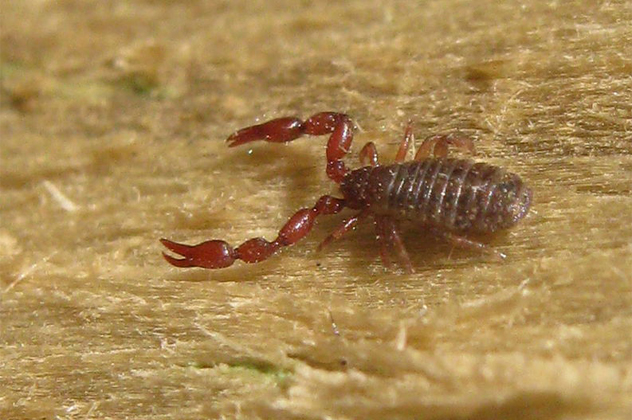 The odds are pretty high that these obscure arachnids are in your own backyard, but equally likely is that you’ll never see one. Not only are they tiny, but they prefer to live in deep, dark places under the soil or in the crevices of rotting logs.

Pseudoscorpions seem to boast a whole grab-bag of interesting features. Their claws produce venom (enough to kill an unwary mite) and their jaws produce silk, but only for nesting. The creatures mate through an elaborate “dance,” facing one another and holding each other’s claws in a sort of waltz. They also engage in behavior known as phoresy—they use other, larger creatures for transportation. A pseudoscorpion will grab onto the leg of a fly or other winged insect with a single claw and hang on until dropped off at a new location. 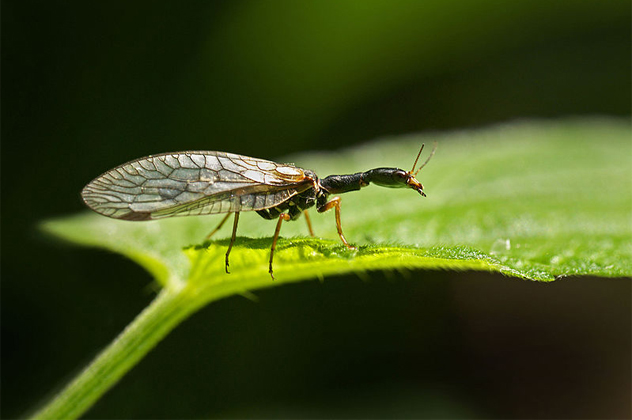 There are only around 250 species of the order Raphidioptera known to man. It’s a fairly small group for any insect order, and there seems to be little variation between species. Named for their long necks and heads, adult snakeflies are ravenous, territorial predators of tiny, plant-eating insects such as aphids. Their similarly serpentine larvae feed on insects and insect eggs in soil or under dead tree bark. The oldest snakefly fossils known are from the early Jurassic period, and they appear to have undergone little to no change over the last 140 million years. 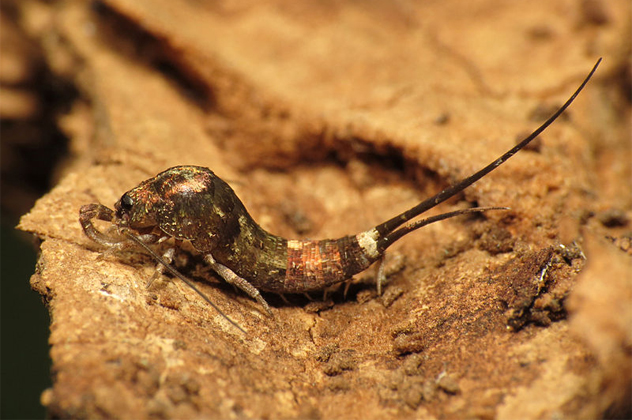 Resembling a cross between a silverfish and some sort of tiny prawn, jumping bristletails can be found under stones and logs all around the world and are easily large enough to notice. Sometimes, these creatures are over 25 millimeters (0.5 in) in length, and when disturbed, they employ their tails to flip and hurl themselves like tiddlywinks.

Archaeognatha means “ancient jaw” and refers to a jaw structure found in almost no other modern insects. In fact, the bristletails are among the oldest and least-changed insect known to man. They fist appeared on Earth in the Devonian period, along with the very first arachnids. During mating, the male bristletail produces a long strand of silk and hangs a series of sperm packets from it—like a strand of Christmas lights—that the female will gather up during their mating dance. 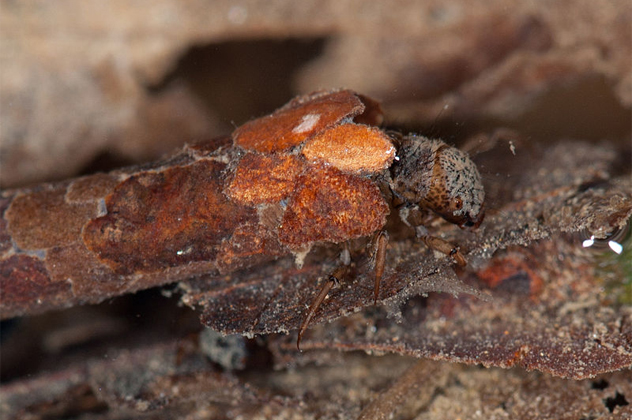 It’s likely you’ve actually seen adult caddisflies flitting around lightbulbs at night, but these drab, tiny, moth-like animals don’t exactly stand out. It’s the larval stage of the caddisfly—a caterpillar-like aquatic insect found in flowing rivers and streams—that’s so interesting. These larvae build a silken case around their bodies and exhibit a wide variety of lifestyles. Some are algae eaters or scavengers and disguise their bags with bits of sand, mud, and pebbles. Others are filter feeders or even predators with their net-like bags facing the water’s current to collect food.

Hubert Duprat, a French artist, has even used caddisfly larvae to help create his unique works of art. He provides the insects with bits of gold, pearls, and jewels so the larvae can use them for their bags. 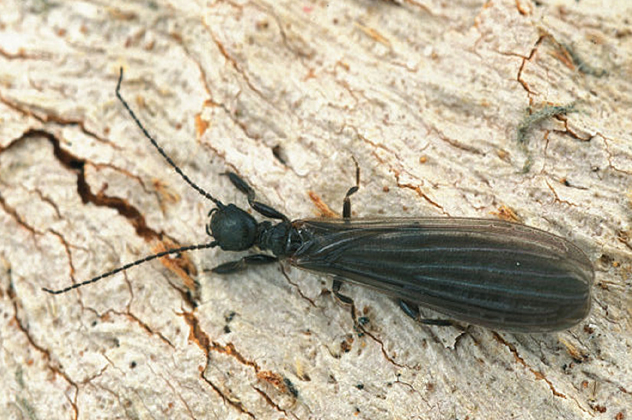 Webspinners are named for the spider-like silk they can produce from their bulbous front legs, but these scavengers aren’t interested in trapping anything. The webbing is only used to weave the tubes in which they live and is often spun between cracks in wood or soil. Exhibiting what we call a “subsocial” lifestyle, a single, wingless female webspinner will take close care of her young and share her home with them throughout their lives. It’s a simpler, less specialized level of socialism than what’s seen in ants, bees, or termites, but webspinners seem to have been content with it for tens of millions of years. 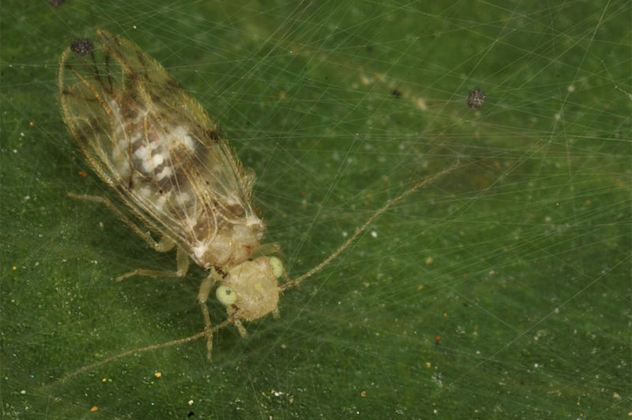 Commonly hunted by the ferocious pseudoscorpion, book lice are similar in size and shape to the lice that infest our hair and bodies. Unlike the lice that haunt all parent’s dreams of school, these lice are easily found in old, deteriorated books. Feeding exclusively on mold and mildew, the insects are rather a symptom of neglect than a cause of damage. Before books were better protected and chemically treated, whole ecosystems of book lice and their various predators could be found in musty libraries, including the pseudoscorpions (earning the nickname “book scorpions”) that eat them.

In the wild, book lice are most at home in damp, moldy caves, while their cousins, the “bark lice,” can be found on mossy tree trunks. 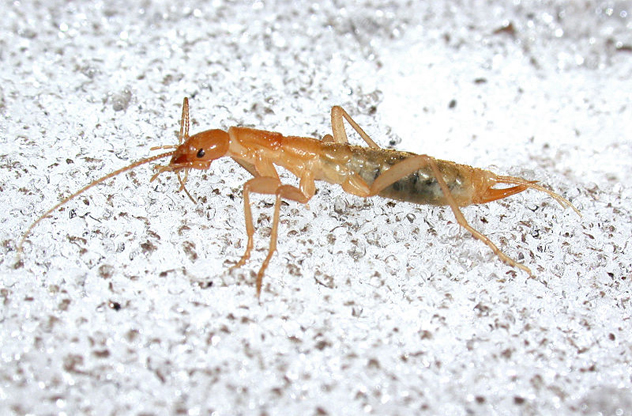 Fossil evidence shows that the earwig-like Grylloblattids were once a dominant form of insect life around the world. Today, only 34 species cling to existence in environments that are too cold for other competing insects. Most species live in cold, temperate forests at high elevation. Some are even found exclusively crawling on the icy surfaces of glaciers where they feed on thin layers of algae. The insects die if they become either too cold or too warm, and even being held in a human hand can roast one to death, putting these ancient creatures at serious risk of extinction due to climate change. 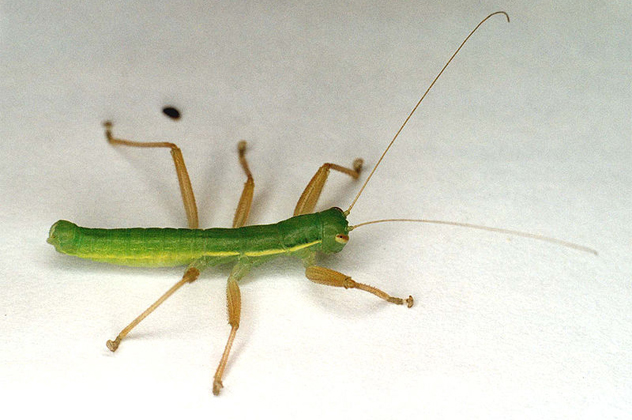 Resembling a cross between a walking stick and a wingless preying mantis, “gladiators” were mostly unknown to science until 2001. The insects were incredibly common in parts of South Africa and had even been collected by scientists before, but the creatures looked so much like immature grasshoppers or katydids that nobody noticed they were something entirely new.

At first, these predatory creatures were thought to represent an entirely separate order of insect life, but now we know they represent something even more impressive—an entirely different branch of the rare icy “rock crawlers.” These gladiators prefer much hotter climates and a purely carnivorous diet. It seems that at least some form of rock crawler may continue roaming the Earth for the foreseeable future. Together, these two groups are now considered part of just one order, known as the Notopotera.