Tourism has many benefits, such as providing jobs to the community, preserving cultural traditions that are at risk of extinction, fostering a sense of identity and pride among various groups, and providing financial support for the preservation of natural resources and ecosystems. What’s not good, though, are stupid and cruel tourists. 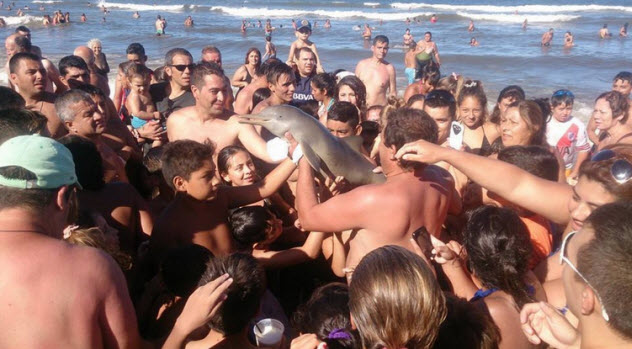 Taking selfies with wild animals can be considered animal cruelty. Though it’s a form of abuse, it’s harmless most of the time. However, there are certain instances when taking selfies can turn deadly for the animals.

In February 2016, a baby dolphin died after it was taken out of the water and then passed around a mob eager to touch and take selfies with it. The incident happened in the beach resort town of Santa Teresita, Argentina. The baby dolphin belonged to an endangered species known as La Plata or Franciscana. They are only found in Brazil, Uruguay, and Argentina. What’s remarkable about them is that they are the only type of river dolphin that can live in saltwater. To date, only 30,000 of these dolphins are alive.

A video has surfaced showing a man scooping the poor dolphin out of the water and then passing it around a crowd of curious tourists. After having their fun with the animal, the group eventually left it to die in the mud. Sadly, at no point in the video “does it appear that anyone in the crowd intervened or attempted to return the animal to the water.”

Whale sharks are known for their gentleness. They are so friendly that they have been dubbed the “gentle giants of the ocean.” Sadly, there are a few people who abuse the gentle behavior of these sea creatures.

In 2015, a video surfaced on the Internet that showed two tourists abusing a whale shark. The video was originally uploaded by an anonymous person from Venezuela. It was later posted on Facebook by Marine Connection, a London-based environmental group.

In the video, two men can be seen laughing while surfing on the back of a whale shark. They were holding a rope attached to a moving boat while they were enjoying this abusive activity. One of the tourists decided that he’d had enough and climbed back on the boat. However, the other one went for a second round. You can clearly hear the laughter and cheers of his friends as he used the poor whale shark’s back as a surfboard.

Whale sharks are an endangered species. For many years, they have faced threats from hunters, fishing nets, boat propellers, and now stupid tourists. 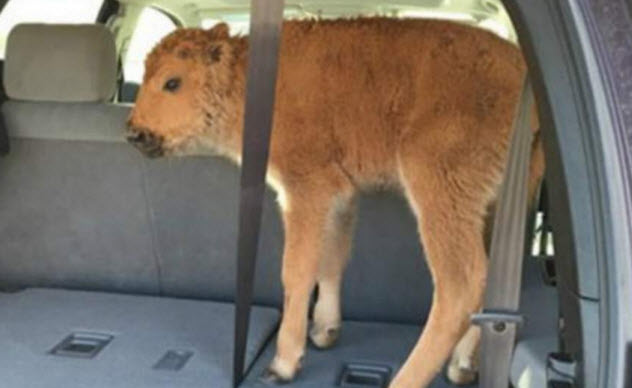 A baby bison had to be put to death because of the stupidity of two tourists. The incident happened at Yellowstone National Park in May 2016. While visiting the park, a father and son spotted a baby bison that “looked like it was cold.” Thinking they were saving the animal’s life, they decided to load it into their Toyota Sequoia.

A fellow tourist warned the father and son, but they didn’t listen. Instead, they headed off to a ranger station located in the northeast corner of the park. There, they spoke with a park official and told him that “they were seriously worried that the calf was freezing and dying” and that they had to do something to save its life.

Unfortunately, this seemingly innocent act of kindness turned out to be harmful for the bison. As a result of human interference, the mother rejected the animal. Park rangers tried several times to reunite the newborn with its herd. However, they didn’t succeed.

In the end, the bison had to be euthanized because it started to pose a threat to tourists by approaching them along the roadway. This incident is a good reminder that just because your intentions are good doesn’t necessarily mean you are right. 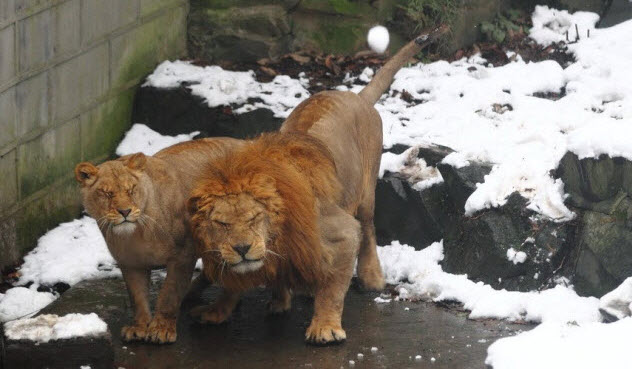 Over the years, China has gained a reputation for having abusive zoos. Thankfully, the government has started to implement certain measures to curb this growing problem. However, they have failed to consider that visitors engage in this abuse as well.

In January 2013, visitors at Hangzhou Zoo abused two lions by throwing snowballs at them. The incident was started by one tourist. With no zoo staff around, other tourists were encouraged to join in. Obviously, snowballs cannot hurt large animals, such as lions, but these creatures deserve respect “and they should be treated fairly.”

Photos of this sad incident circulated on Sina Weibo, China’s equivalent of Twitter. In the photos, the two lions—a male and female—could be seen huddling together as they endured the abuse. This isn’t the first time that animals from Hangzhou Zoo suffered tourist cruelty. In the past, visitors would throw “anything they could get their hands on at the animals,” such as rocks, water bottles, and even Coke cans. 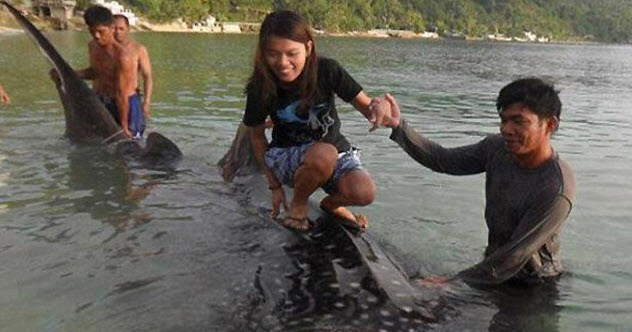 The two unknown tourists mentioned earlier are not the only ones who tried to use the back of a whale shark as a surfboard. A girl named Carinn Lestolis, who was 18 at the time of the incident, also stood on the back of a 3-meter (10 ft) whale shark. The abuse happened in Boljoon, a small town located in Cebu, Philippines in 2012.

The poor animal got trapped in the fishing nets of Pablo Trapero, a local fisherman. Trapero decided to drag the nets 100 meters (330 ft) from the shore so that he could set the animal free. After two hours, the fisherman and his neighbors succeeded in untangling the whale shark from the nets. However, by this time, people had already gathered around the poor animal.

It was then that Lestolis got the idea to stand on the back of the whale shark, take a photo, and then upload it to Facebook. After the picture was posted online, she was heavily criticized by Filipino netizens.

She pleaded ignorance by saying, “We didn’t know it’s wrong to touch them. All we know was that they shouldn’t be harmed.” According to her, she spent two minutes on top of the whale shark just to get a picture with it. As a result of this incident, the local government of Boljoon has established certain measures to prevent this kind of abuse from happening again. Offenders will be fined and jailed. 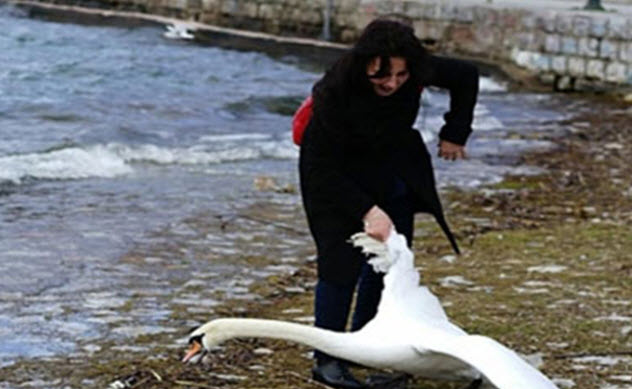 The baby dolphin from Argentina isn’t the only animal that’s fallen victim to selfie-crazed tourists. In early 2016, a swan from Macedonia suffered the same fate after it was pulled out of the water to be used as a selfie prop.

The incident involved a Bulgarian tourist visiting Macedonia’s Lake Ohrid. A local named Nake Batev was at the lake when this unfortunate event happened. According to him, the woman was “roughly handling the bird” and “grabbing for her friends to take the picture.” Batev also took photos of the incident and reprimanded the tourist, shouting at her to let the animal go. The woman eventually released the poor swan and walked off with her friends.

As for the fate of the swan, there are conflicting reports. According to the Macedonian International News Agency, the animal died as a result of the Bulgarian tourist’s rough handling. However, Batev says that the “swan actually swam away.” Nevertheless, incidents like this should not happen again. People need to stop risking the lives of animals for the sake of a “good selfie.” 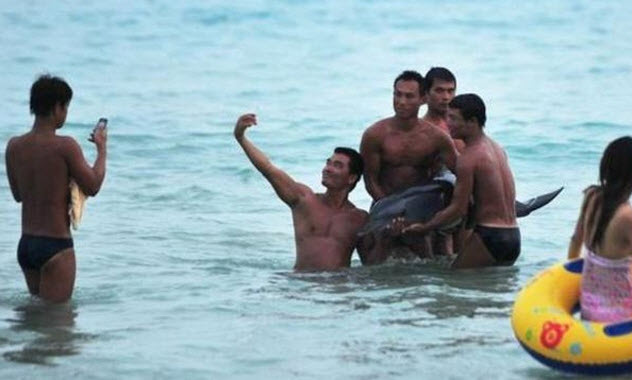 In 2013, Chinese netizens were angered when photos of a dying dolphin being mistreated by a group of tourists surfaced on the Internet. The incident happened in Sanya, a city in southern China. The poor dolphin had injuries on its tail, suggesting that it likely collided with a fishing boat.

The dolphin was still alive when a group of tourists saw it on a beach. Instead of helping the dolphin, they abused and took pictures with it. One photo showed a tourist flexing his muscle while touching the poor dolphin. Rescuers eventually arrived at the scene, but the animal was already dead.

The photos that circulated on Weibo caused outrage throughout China. One netizen called these tourists a “group of animals.” Another Chinese user commented that “China is now filled with people lacking with moral values, ignorance, and decreasing civility.” On the other hand, others said that the reactions of many Chinese netizens were out of proportion to the incident. 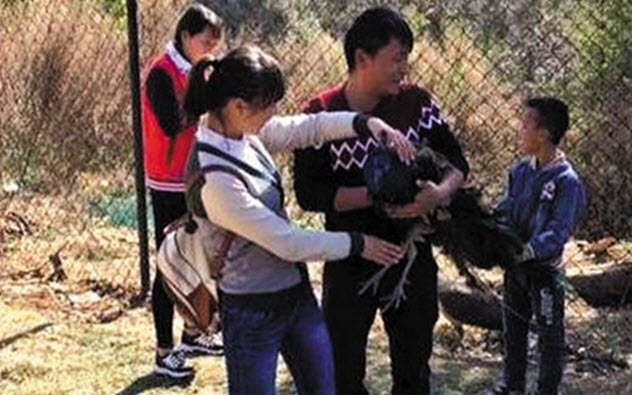 In February 2016, two peacocks died after getting manhandled by a group of Chinese tourists. This unfortunate event happened in the Yunnan Wild Animal Park in the city of Kunming in southwestern China.

Zoo officials believe that the peacocks died from shock. A group of tourists wanted to take pictures with the animals. In the process of taking photos, they started to abuse them, roughly handling them and plucking out their feathers.

Zoo officials have said that this type of horrific incident never happened in the past and that visitors are constantly reminded not to touch the animals. One would wonder, though, where the staff was when this unfortunate event happened. It seems that every time animal abuse by tourists occurs in China’s zoos, the staff is nowhere to be found.

Yunnan Wild Animal Park is a 187-hectare zoo. It has more than 10,000 wild animals with 200 different species, such as pandas, elephants, and lions. 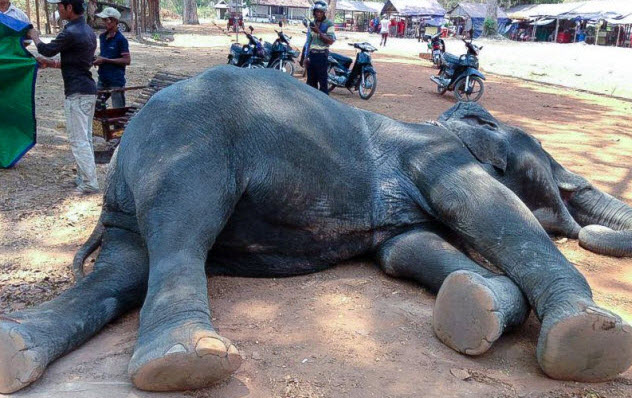 Elephants are common in Cambodia. In fact, a few of them work in the tourism industry. For more than a decade, a female elephant named Sambo carried tourists around Angkor Wat in Siem Reap. She began working for a company called the Angkor Elephant Company in 2001. Sadly, in 2016, her service ended. She died while carrying tourists around the magnificent city of Angkor.

Experts believe that Sambo, who was 40 to 45 years old, died of heat and exhaustion. The animal had been taking a pair of tourists to Bayon Temple. She was on her second round when she suddenly collapsed. Later on, it was determined that the cause of her death was a heart attack.

Sambo’s unfortunate death led to a petition to stop elephant riding in Angkor. The petition was posted on the website Change.org, and it garnered 10,000 signatures. Animal activists are hoping that Sambo’s death will put an end to the practice of elephant riding—a cruel activity that only benefits a few within the tourism industry.

Man attacks crocodile: the reasons why

Of all the animals talked about on this list, Fatso’s story is the most unique. Instead of suffering at the hands of stupid, cruel tourists, Fatso was able to exact revenge on behalf of all the abused wild and captured animals after he bit a drunk, stupid man in 2010.

The incident happened in Broome, a town in Australia, and it involved a man named Michael Newman. After getting kicked out of a bar, Newman decided that it was a brilliant idea to scale an enclosure and ride a saltwater crocodile. Unfortunately for this stupid guy, the enclosure housed Fatso, a crocodile that was 5 meters (16 ft) long. Fatso got insulted by this man’s stupid, arrogant action and punished him by tearing chunks of flesh from his right leg.

Luckily for Newman, Fatso was not in the mood that evening. Due to cold temperatures, the crocodile was a bit more sluggish than normal. But had it been warmer and Fatso more alert, Newman would have been killed. Saltwater crocodiles have the reputation of not letting go once they get hold of you.