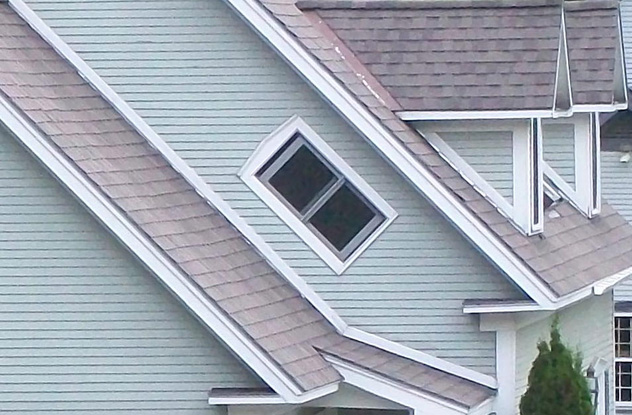 Witch windows are windows rotated 45 degrees and placed in the gable-end wall of a house. Being diagonal and parallel to the roof slope means that these windows could be fitted in places where traditional windows did not otherwise fit. It has also been suggested that witch windows were installed as a result of cold winters in Vermont (where they are most popular), as many traditional windows let in too much of a draft in winter. 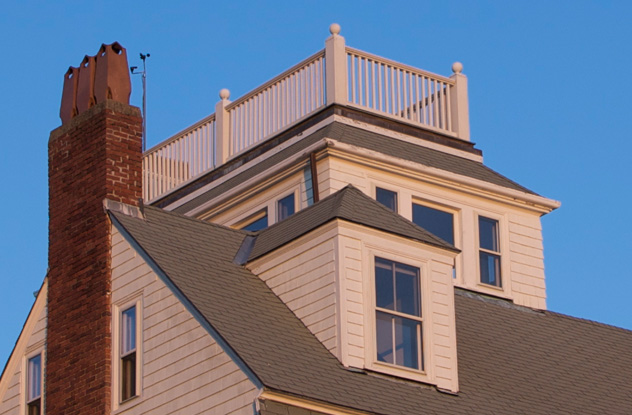 A widow’s walk is a small, railed rooftop platform that gives a clear view of the surrounding area and sometimes even the horizon. It is said that the widow’s walk was often used by the faithful wives of sailors who would stand or sit on these platforms whenever they had time, gazing toward the horizon and waiting for their husbands to come back home from the sea. However, many of the sailors died at sea—hence the name “widow’s walk.”

Some say that widow’s walks were also used by sea merchants who, after being notified of an incoming ship, would climb atop the rooftop to confirm that their vessel had safely returned to the shore. Thus, widow’s walks once went by a different name—captain’s walks.

Most historians, however, claim that widow’s walks were only used during chimney fires. In the past, people kept leather buckets filled with sand and water near their hearths. In case of fire, these buckets were taken up to the widow’s walk where their contents were poured down the chimney to extinguish the fire. 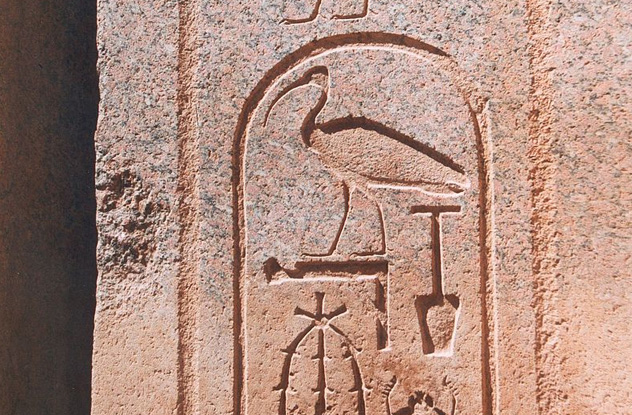 A cartouche is an elaborate, often scrolled design made of metal, stone, or wood that became an important architectural feature in the 16th century. Some say that it developed from flattened oval shapes used for highlighting ancient Egyptian royalty names. From then on, cartouche designs have had many functions and surrounded anything from important messages and coats of arms to landscape and genre paintings both in architecture and decorative arts.

Back when streets had no names or numbers and many people were illiterate, cartouches helped identify homes and businesses. Many cartouches were decorated with signs or reliefs that reflected the occupant’s profession or social status. For example, a relief of a golden cup framed by an oval cartouche represented the house of a goldsmith. A relief of a fiddle framed by an ornamental cartouche represented the house of a violin maker. 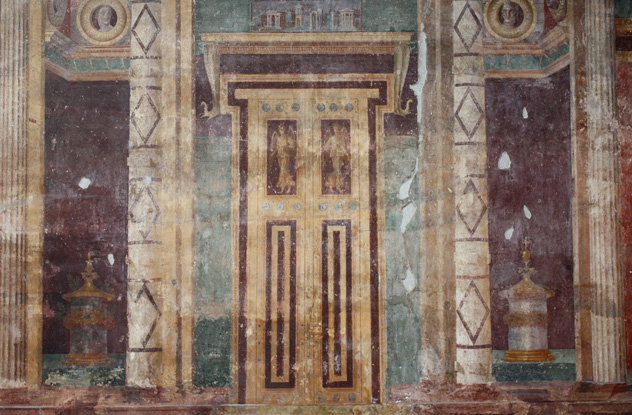 False doors were common architectural elements in Egyptian tombs, Etruscan tombs, and Roman villas. In Egypt, false doors could be found in tombs and mortuary temples and were also known as “Ka doors” because they allowed the Ka, an element of the soul, to interact with the world of the living by passing through the door or by receiving offerings through it.

In ancient Etruria, false doors could also be found in tombs. Some say they were used as a door into the tomb itself, others say that they were doors into the otherworld, while still others claim that they simply marked a place where a family would carve a door in case of the tomb’s expansion.

In ancient Roman villas, false doors were often painted opposite real doors both to achieve symmetry and to make the room appear bigger than it actually was. 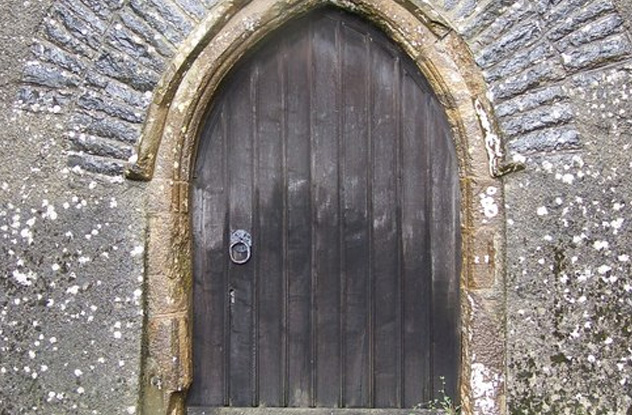 In ancient churches, the north door of the church was often called “the devil’s door.” Most of these doors in existing churches were built from pre-conquest times to the 12th century. Today, almost all of these ancient doors are blocked up for reasons unknown, although it could have been done to suppress the widespread superstitions about the devil.

Some say that the north door was used by the Pagan population to enter the church, where the old Pagan site of worship was located. In this case, the name would have derived from the connection that the Christian population made between the devil and the old religions. Others claim that when a baby was baptized and the spirit of the devil was exorcised, the north door was opened briefly to let the exorcised spirit flee. The door was then closed to stop the devil from re-entering. 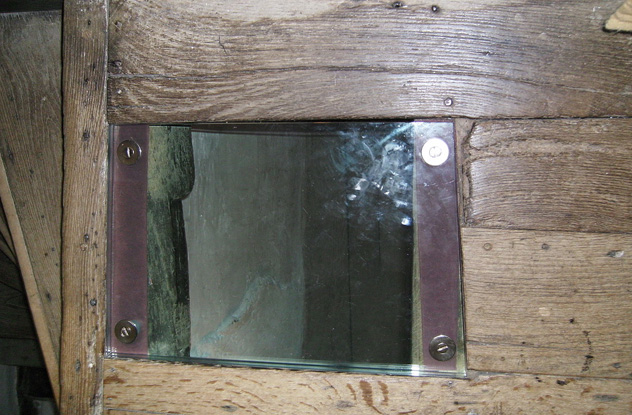 When the first Jesuits arrived in England, the parliament responded by enacting statutes that made it illegal to convert English people to Catholicism. Later, Catholic priests were forbidden from entering England altogether, and anyone who was caught harboring them was punished severely. Priest hunters prowled around restlessly, collecting information and locating Catholic priests.

Thus, due to this hostile environment, hiding places were built into the homes of many Catholic families. Priest holes were built in fireplaces, attics, and staircases and were usually very small, with no room for standing or moving about. Sometimes, priests died in the priest hole from lack of food or oxygen.

Nicholas Owen was the most skillful designer of priest holes. He constructed hiding places within hiding places that often had an escape route and some means of passing food to the priest during prolonged priest searches. 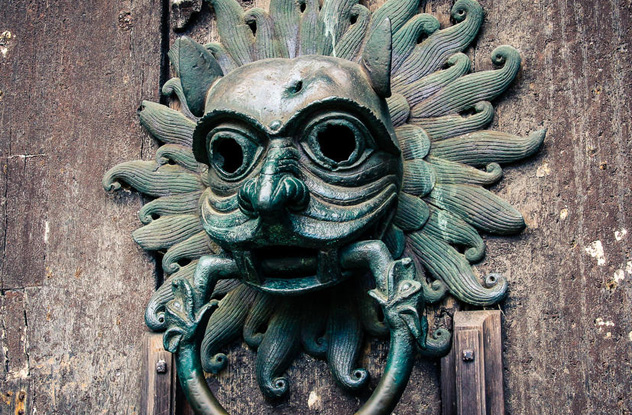 Sanctuary knockers, or sanctuary rings, were knockers that could be found on the outer doors of Christian churches. Sometimes they were simple metal rings; other times they were elaborately decorated. According to the ecclesiastical law of the middle ages, if a refugee—usually a person who had committed murder in self-defense or broke out of prison—touched the sanctuary knocker, he was considered to be totally immune from arrest.

In the Durham cathedral, for example, once refugees rapped the sanctuary knocker, they received 37 days of sanctuary. During this time, they could attempt to come to an agreement with their enemies or plan their escape. The Durham Cathedral also had several small chambers above the doorway from where the monks kept a lookout for sanctuary seekers day and night to let them in as promptly as possible. 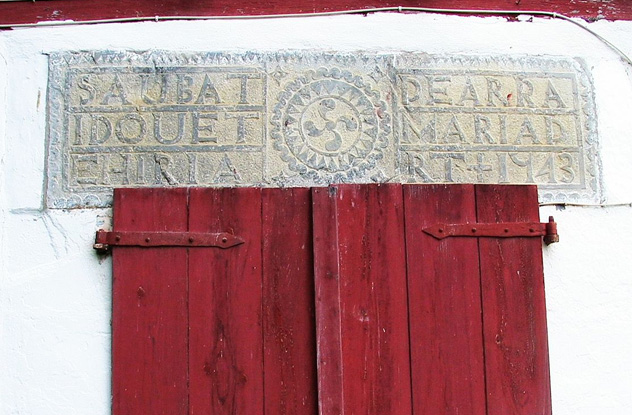 Most traditional Basque houses had a piece of lintel hanging above the entrance door to the house. The lintel was usually carved with the names of the first owners of the house as well as the date that the house was built or renovated. For example, one house in the Labourd village in the Basque region of France has a lintel above it that tells how a mother built the house in 1662 with the money that her son had sent her from the West Indies.

Sometimes, the carvings also included the name of the house as well as symbols such as the Basque cross or lauburu, which represented the Sun (and which was considered to be a good omen, for the Sun drives away the dark and evil), religious symbols, or signs representing ancient tools of the owner’s trade. 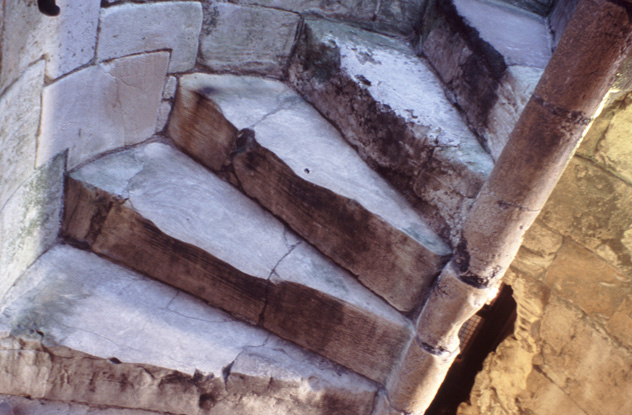 In medieval times, castles often had their circular stairs designed to turn up-right. This was because most individuals were right-handed, and since the defenders were more than likely above the attackers, an attacker coming up the stairs would find his swordsmanship cramped by the adjacent wall, impeding his fighting ability. The defender enjoyed a larger range of motion and a superior height advantage. Families who were left-handed had their circular stairs designed up-left.

Circular stairs had no handrails, so the defender could push the attacker off the stairs completely. The steps of the stairs were also specifically designed to be of different heights and widths, making it difficult for attackers to climb and causing them to constantly trip. 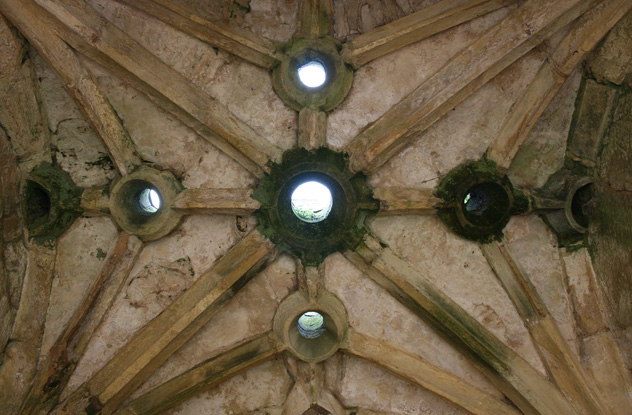 Murder holes could be found around the castle’s main entrance and in the gatehouse passages through which missiles or dangerous substances could be thrown down at the enemy. They were popular during the medieval period and were considered an essential part of a castle’s defense. Through the murder holes, defenders attacked invaders with stones, boiling water, hot sand, molten lead, oil, and tar. Hot oil, however, was used sparingly due to its high cost. Sometimes, rotting materials such as dung or dead bodies of animals and humans were also dropped down from the murder holes.

Over time, machicolations were developed. They were similar to murder holes but gave the defenders a better position. Machicolations, made of wood (initially) or stone (later), were added to a castle’s outer walls and allowed murder holes to jut out from the castle’s wall and above the enemy, making it easier to defend the castle and kill the invaders.