Over the years, hundreds, if not thousands, of priceless cultural and historical artifacts have been stolen. They usually end up in the hands of greedy private collectors or museums. Though the majority of these stolen artifacts remain lost, many have been recovered and returned to their rightful homes. 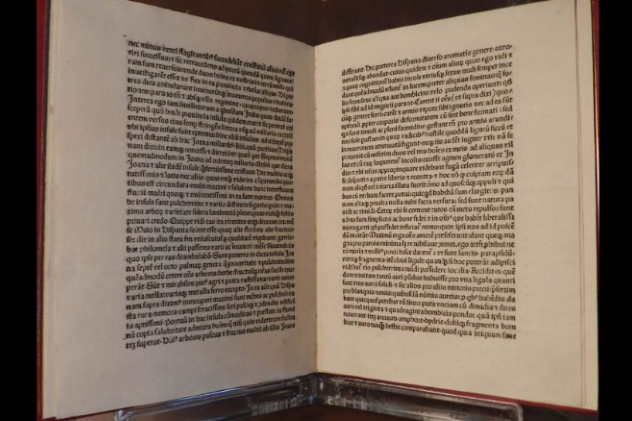 Photo credit: US Immigration and Customs Enforcement via CNN

Christopher Columbus is arguably the most famous explorer in history. In 1493, he wrote an eight-page letter addressed to King Ferdinand and Queen Isabella of Spain, who financed his historic 1492 voyage across the Atlantic Ocean. The letter, which was written in Latin, narrated Columbus’s first impressions of Cuba and Hispaniola.

The historic letter was stolen from a library in Florence, Italy, in 1950. The staff didn’t notice that the real document was stolen because it was replaced by an excellent forgery. The priceless artifact resurfaced in 1990, when it was bought by a collector in Switzerland. In 1992, it was sold at an auction in New York for $400,000. In 2004, it landed in the US Library of Congress, where it stayed hidden inside its vaults for years. It was only in 2016 that the 500-year-old document was returned to Italy. 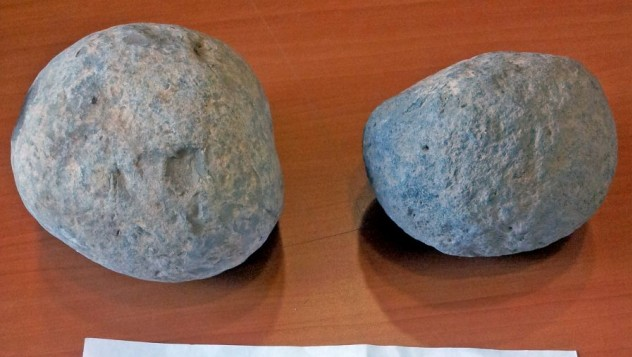 Photo credit: Dr. Malia Manor via The Times of Israel

Two stones used for a Roman ballista (a missile-firing weapon) were returned to a museum in Beersheba, Israel, in July 2015. The stones were the same size as grapefruit and weighed several kilograms each. The artifacts were unearthed in an archaeological site in the Golan Heights known as Gamla. In all, 2,000 ballista stones were found at the site.

So why did the thief return the stones after stealing them in 1995? Well, he claimed that the artifacts were cursed. When he returned the stones to the museum, he included a short note saying, “[The stones] have brought me nothing but trouble.” He ended his letter with a warning, “Please, do not steal antiquities.” In 2012, several figurines were seized at the John F. Kennedy Airport in New York City. The priceless artifacts, which were made from terra-cotta, were stolen from Nigeria’s national museum. Since the director-general of Nigeria’s museum and antiquities didn’t report any theft, he was investigated for possible involvement in the crime.

The 2,000-year-old figurines were created by the Nok people, an ancient culture that lived in Nigeria more than 2,000 years ago. They mysteriously disappeared during the early part of the first millennium.

One unique feature of the recovered terracotta figurines is that each one had “a distinctive face.” Habib Baba Habu, who served as Nigeria’s consul general during the time of the recovery, explained that this was typical of Nok sculpture. According to him, Nok artisans got inspiration from “individual people [ . . . ] depicting them riding horses or donkeys [ . . . ] or with farm tools.” Photo credit: Mission of the United States of America to Poland via LiveScience

In April 2014, an 18th-century oil painting of Jesus Christ was returned by the US government to the people of Poland. The painting, which depicted the ascension of Christ to Heaven, was stolen sometime between 1988 and 1996 from the Saint Martin Roman Catholic Church in Siciny, Poland.

After being missing for decades, the painting resurfaced in 2012, this time on eBay. Bids for the artwork started at $22,000. It was also available for instant purchase at $35,750.

No charges or arrests were made, since investigations showed that the eBay seller “was not the original owner of the painting nor had any knowledge of the theft.” The seller claimed that he got the artwork from his father. The latter claimed that he got it as partial payment for plumbing supplies.

6 The Virgin And Saint Vincent 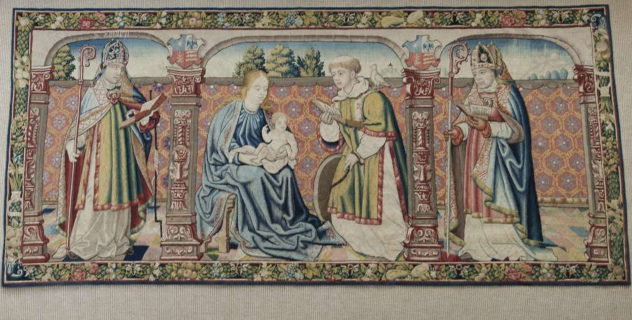 Photo via the Houston Chronicle

In December 1979, a 500-year-old tapestry known as The Virgin and Saint Vincent was stolen from a cathedral in Spain. The 1.2-meter (4 ft) by 2.4-meter (8 ft) artwork, which was made from silk and wool, depicts baby Jesus along with Mary and three saints. It was stolen by an infamous art thief named Rene Alphonse Van Den Berghe, more popularly known as Erik the Belgian.

The stolen tapestry was sold to a Houston business in 2010 for $369,000. For years, it stayed in the establishment, with the owner unaware that the artwork was stolen. It was only in 2013 that the tapestry was seized and returned to the people of Spain in a ceremony held inside the Spanish ambassador’s residence in Washington, DC. In 2014, the Italian government asked Switzerland for assistance in recovering a stolen Etruscan sarcophagus, which they believed was smuggled into the rich alpine country. The Swiss government cooperated, assigning prosecutor Claudio Mascotto to the case. A search was conducted, and not only did the Swiss officials recover the rare sarcophagus, but they also found other stolen Etruscan artwork.

The Etruscans were a mysterious group of seafaring people who ruled parts of the Mediterranean before being assimilated to the Roman Empire during the first century BC.

Other stolen artifacts, including vases, frescoes, busts, heads, and painted bas-reliefs, were found along with with the rare sarcophagus. They’d remained hidden inside a warehouse in Switzerland for 15 years. It was only in January 2016 that these treasures were returned to the Italian government.

4 Letters By Catherine The Great And Pyotr Tchaikovsky 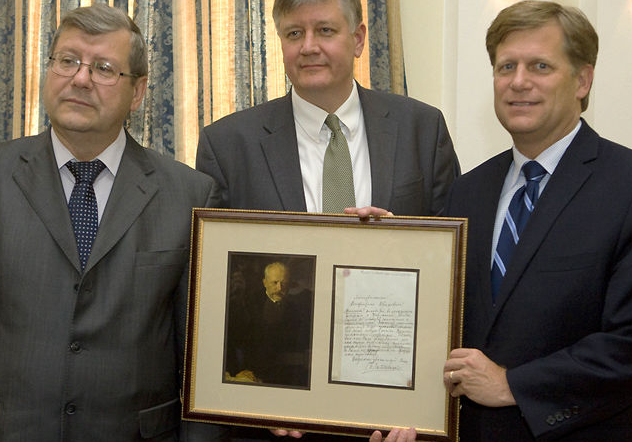 In the early 1990s, several historical documents, including letters by Catherine the Great and Pyotr Tchaikovsky, were stolen from Russia’s archives in St. Petersburg and Moscow. The theft happened during the collapse of the Soviet Union. The documents were smuggled into the United States, where they remained hidden for years.

In 2013, the historical documents were put up for auction on several US websites. Their prices ranged from $300 to $15,000. When the letters were posted online, the US Immigration and Customs Enforcement immediately conducted an investigation. The agency seized the historical documents and then returned them to the Russian government the same year. However, no criminal charges or arrests have been made. 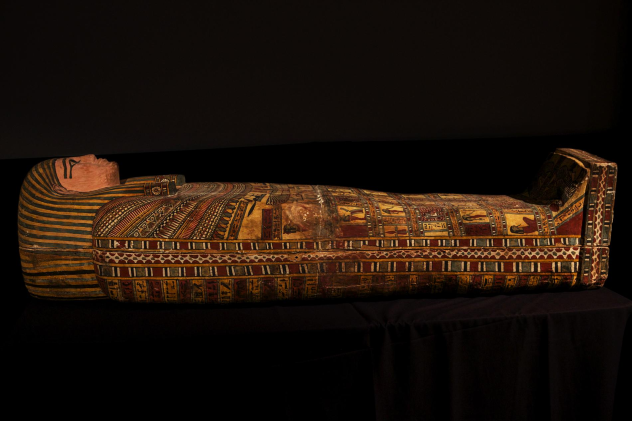 In 2015, a 2,600-year-old Egyptian coffin was returned by the US government to the people of Egypt in a repatriation ceremony held at the National Geographic headquarters in Washington, DC. The priceless artifact landed on US soil through “a complex network of artifact smugglers, importers, dealers, and collectors.” But retrieving the sarcophagus wasn’t easy and quick. It took five years for the US Homeland Security Investigations and Immigration and Customs Enforcement to investigate the case and recover the ancient relic.

The three-part coffin belonged to an Egyptian woman named Shesepamuntayesher. Her mummified remains were no longer inside the sarcophagus when it was stolen. The artifact spent some time in Dubai before being smuggled into the US, where it was eventually recovered. It is now safely housed in the Grand Egyptian Museum in Cairo. In 2008, agents from the Department of Homeland Security’s Immigration and Customs Enforcement (ICE) in New York received a tip from their international partners that a stolen artifact was about to be smuggled into the United States. Two months after receiving the tip, ICE seized a limestone head of Sargon II in New York after it was shipped from Dubai. Sargon II was a great king who ruled the ancient Assyrian empire from 721 to 705 BC.

Experts believed that the head was cut off from a winged bull statue, also known as a lamassu. In addition, they suggested that the artifact was stolen from Khorsabad, the once magnificent capital of the mighty Assyrian empire. The limestone head, together with dozens of other stolen artifacts, were returned to the Iraqi government in 2015. In 2002, NASA experienced one of the most bizarre things in its history: Someone stole moon rocks. The culprit was Thad Roberts, age 25, who was working as an intern at NASA’s Johnson Space Center in Houston, Texas, at the time. Roberts stole 7.71 kg (17 lbs) of moon rocks brought back to Earth by the historic Apollo 11 mission.

After committing this bizarre heist, Thad immediately scattered the moon rocks across his bed and proceeded to have “uncomfortable” sex with his girlfriend on top of them. The rocks were eventually recovered after Roberts made the mistake of selling them on the Internet. For committing such a bizarre crime, Roberts was sentenced to 100 months in prison.