Millions of years ago, trees oozed resin that captured anything it touched. Resin-turned-gemstone, amber is a timeless preservative allowing snapshots of prehistoric moments. Plants and animals look as if they are sleeping, and such fresh specimens have the stark ability to change the hopes and theories commonly held about the past. 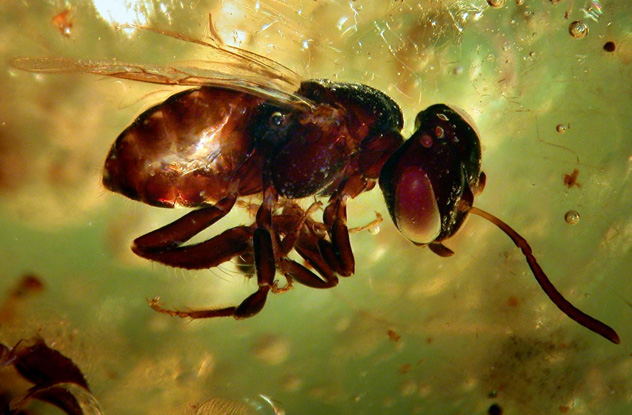 After trying every technology available to extract ancient bee DNA from copal (a younger version of amber), scientists have concluded that whipping up a dinosaur anytime soon is impossible—at least not from the blood-gorged-mosquito-in-amber storyline made popular by the movie Jurassic Park.

Despite using highly advanced methods, no DNA survived within the copal, and that is where all hope of creating a T-Rex dies. If the building blocks of life can’t survive in copal—which can be 60–10,600 years old—then there’s little chance it remains viable in amber, which is many millions of years older.

Nobody really knows how long DNA remains. The decay rate of DNA is still not an exact science, and a tentative theory holds that the limit is a millennium—if frozen under ideal circumstances. 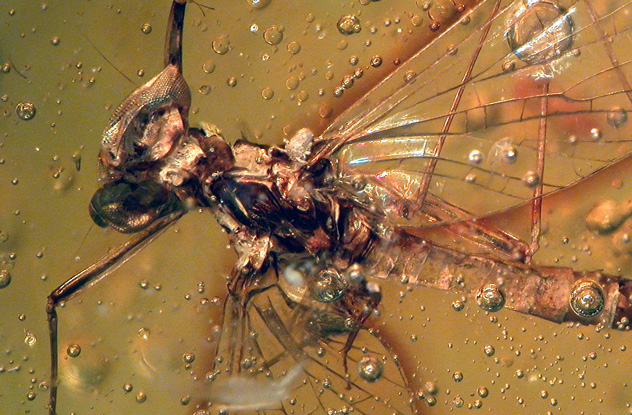 Deep inside a piece of amber, a CT scan found something unique. An adult mayfly had a hitchhiker on its back: a tiny springtail was attached using its antennae. The 16-million-year-old pair is the first evidence of any species employing a mayfly as a ride.

Merging nearly 3,000 X-rays, scientists created a 3-D picture of the two creatures. This provided an accurate and pioneering way to observe the previously unknown behavior. They could safely digitally dissect and see hidden details such as the springtail trying to jump away just as the resin killed it. Because springtails are so hard to pin down, it’s very likely that this is behavior continues in modern times, just unnoticed. 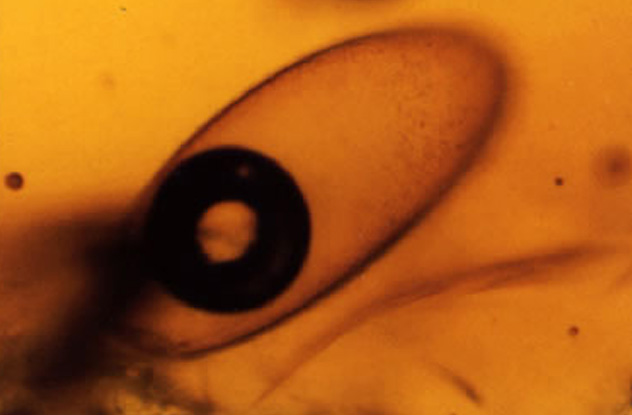 Bubbles trapped in amber alerted scientists to an intriguing mystery. The ancient time capsules were collected from 16 sites across the world and had their bubbles zapped with a quadrupole mass spectrometer. The air trapped within revealed that dinosaurs breathed an atmosphere that was much richer with oxygen than today.

In the Cretaceous period, 67 million years ago, creatures snorted lungfuls of 14 percent more oxygen. When air was studied in younger amber, oxygen levels dropped gradually from the late Cretaceous to early Tertiary times—an arc that followed the demise of the dinosaurs. It’s possible that the oxygen-rich atmosphere was necessary for dinosaurs to flourish, especially the ones that weighed more than a house. 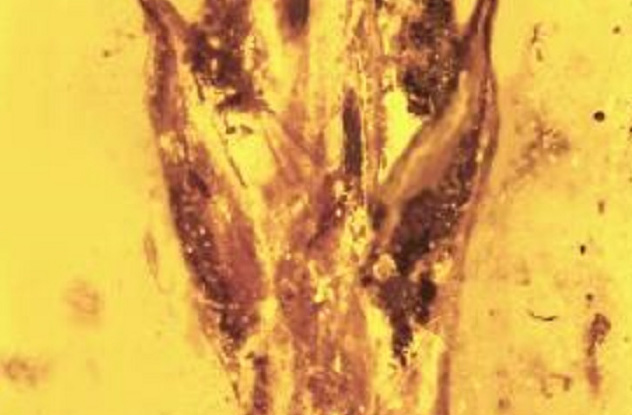 Dino herbivores might have spaced out on a psychotropic fungus. Called Palaeoclaviceps parasiticus, it’s comparable to today’s ergot, which is used to make LSD.

Evidence of this scary thought (imagine a huge, intoxicated, staggering sauropod) came from the amber mines in Myanmar. A chunk of 100-million-year-old amber held the earliest grass fossil ever discovered, and clinging to it was the dark hallucinogenic. It’s likely that plant eaters regularly consumed this fungus-laced grass.

Researchers aren’t certain how it affected dinosaurs, but they could have suffered the same severe symptoms as modern animals consuming ergot—hallucinations, gangrene, losing their balance, intense pain, and seizures. During the Middle Ages, thousands of people sometimes died when ergot-infected rye made bread. The Myanmar amber proves that this strange parasite has been around since the dawn of the grasses themselves, and it’s been with crops and grazing land ever since. 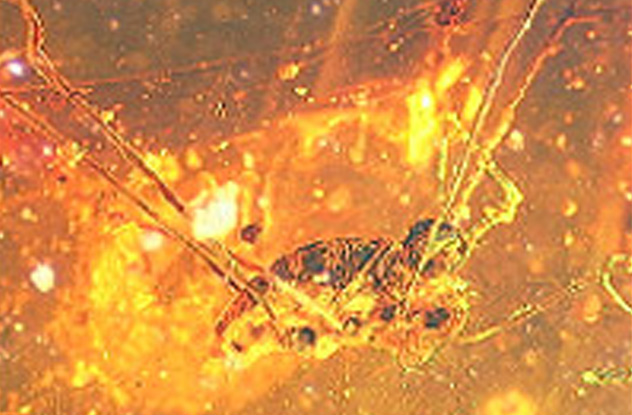 A harvestman found in amber may reveal more about how the dinosaur extinction event affected arachnids. This particular relative of spiders died about 100 million years ago and is near-identical to modern harvestmen. Researchers are intrigued by this rare find from the Mesozoic Era because it could reveal how many arachnid groups managed to survive the cataclysm that wiped out the dinosaurs.

The dinosaurs had their fate sealed by what most still argue was a deadly asteroid-Earth collision around 65 million years ago. Later, post-extinction harvestmen are very similar to this specimen, so its lineage must’ve survived the ancient catastrophe. Arachnids appeared to have diced with the asteroid and its fallout and came out the other side relatively unscathed. 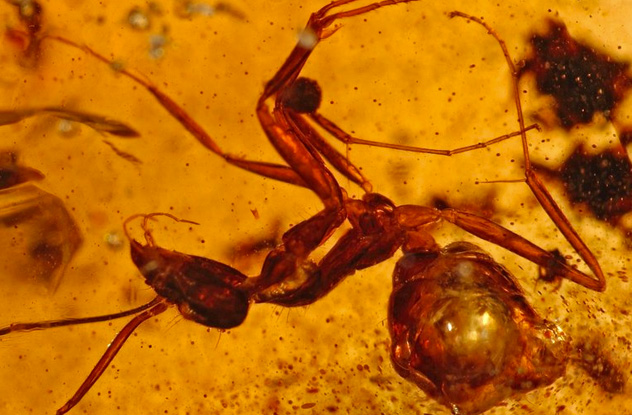 The Indian subcontinent broke from Antarctica about 150 million years ago, remaining separate until it hugged Asia around 50 million years back. Geological evidence supports this, but new amber discoveries are upsetting the apple cart.

When researchers dissolved Indian amber dating back to the isolation period, they expected to find species that had evolved in unique ways. Considering that the subcontinent had no outside DNA influence for a 100 million years, that was a reasonable expectation. Instead, the 700 insects and spiders were closely related to other fossils found in Europe, Australia, New Guinea, and tropical America.

Scientists now believe that there is a connection yet unknown between these places. India’s fauna didn’t evolve in isolation. Plant matter in the amber also suggests that the landscape resembled modern forests, and rain forests are older than previously believed, probably dating back to right after the dinosaurs died out. 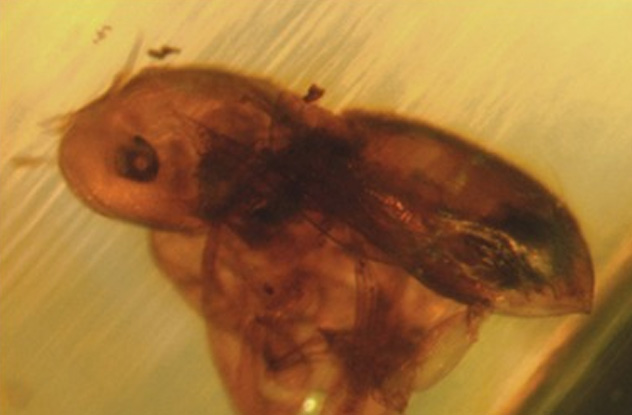 Scientists can only form a picture of prehistoric life with the available puzzle pieces. Several such pieces came in the form of fossil ants found in North America and South Asia. Since none were found anywhere else, the assumption grew that either location was the birthplace of ants. That assumption died during a thorough study of Ethiopian amber.

Among the samples, an ant was found, a tiny guy nearly 95 million years old. The African fossil added a third possible point for the genesis of ants and an opportunity to learn how the three ant groups are related.

The petrified resin from Ethiopia, from the same study, held more wonders. Several insects, a spider, and one mite are the oldest to come out of Africa and would’ve wandered the Cretaceous landscape with dinosaurs. There were also ferns, fungi, and spores never seen before. 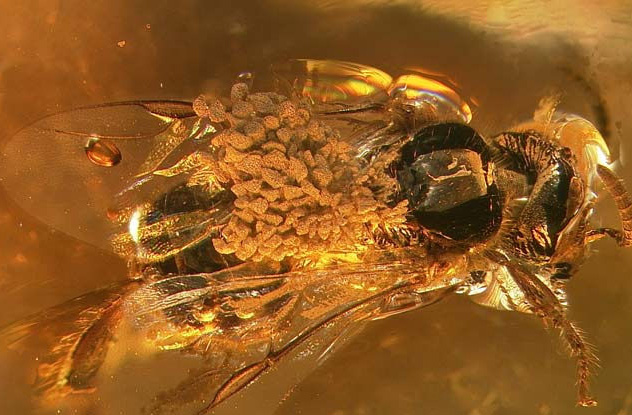 Twenty million years ago, a bee died on the job. After collecting pollen, it perished in tree ooze and landed in a laboratory as a chunk of amber in 2005.

The pollen was identified as an orchid’s. This means that not only are orchids surprisingly older than previously thought but are older than all flowering plants. The flower that provided the pollen was 15–20 million years old, but its predecessors could go back as far as 70 million. The ancient orchid, Meliorchis caribea, was placed within one of five subfamilies that still exist.

This particular amber is also valuable because it’s rare proof that prehistoric pollination wasn’t an accidental business. The now-extinct stingless bee was coated in pollen—something only specialized flower parts could do. 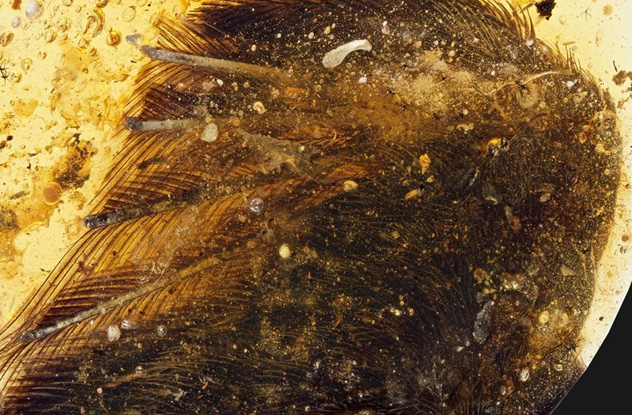 A striking find was rescued from an amber market in Burma, where trading is dangerously casual. Nearly 30 percent contain valuable fossils from the Cretaceous, but they are viewed as impurities and destroyed by jewelers. Researchers bought two pieces containing preserved feathers. Closer inspection brought the shocking realization that they were much more –a pair of wingtips.

The bone, muscle, and feathers resembled those of modern birds, just 100 million years older. They possibly belonged to enantiornithes, a group of avian dinosaurs.

Under a microscope, color returned to the feathers: silver, dark to light brown, and even white bands. Previously, plumage from avian dinosaurs were only available from fossil imprints or amber-trapped fragments too small to identify the species. Tragically, it would appear that before the wingtips reached the market, one of the birds was still completely inside the amber. One wing ends against a sheared surface where it was separated from the now lost body. 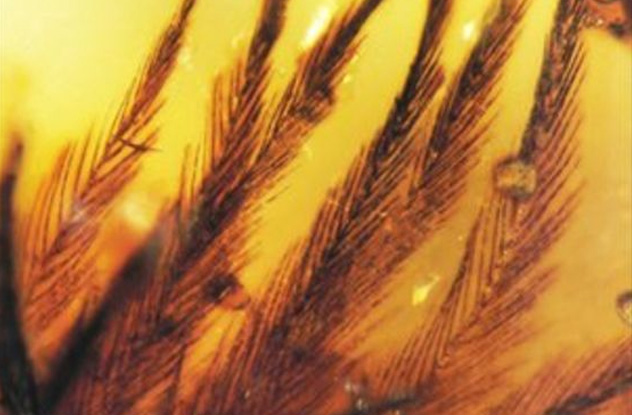 It’s one thing to find wingtips from avian dinosaurs but quite another to find feathers from normal dinosaurs with no wings to speak of.

In a crazy stroke of luck, amber deposits in Alberta yielded all the stages of such dinosaur feather evolution. The 80-million-year-old pieces follow the story of how sparse hair-resembling strands progressed into the familiar double-branched structure of modern feathers.

Only these weren’t meant for flight. The most advanced of the fossil feathers were more adapted to swimming, like those of birds today living in and around water. There is also growing evidence that most dinosaurs, even the non-bird ones, had brightly colored plumage. The old picture that their lizard skins only sported dull earth colors is fading from serious studies. It’s a whole new way to look at dinosaurs, but even so, a fluffy rainbow T-Rex is still scary.