The dead are in demand. Whether used for religion or medicine, corpses bring top dollar. People are willing to put their freedom and lives on the line to plunder the dead for profit. These bizarre cases of corpse smuggling are merely the cases of individuals who were caught. We may never know how much corpse smuggling occurs in the shadows. 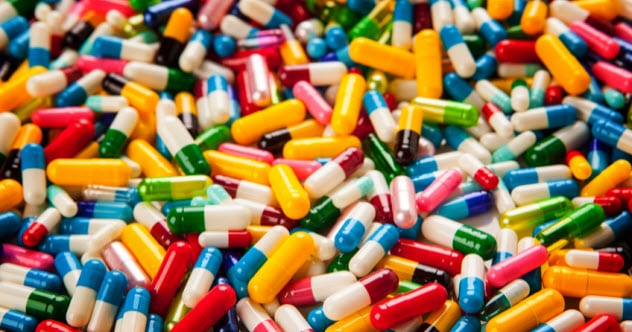 In 2012, South Korean officials seized thousands of pills containing the powdered flesh of fetuses. The pills were labeled as stamina boosters but intended to satisfy a demand for cannibalism. They were manufactured in China, and their grisly nature has ignited international tensions. The Chinese blamed the South Koreans. The South Koreans blamed the Chinese.

Aborted and stillborn children were harvested for the process. They were refrigerated before microwave drying. The corpses were then pulverized, mixed with herbs, and put into capsules. China has a tradition of eating aborted fetuses and placentas, which are considered part of the mother.

This unorthodox medicine is believed to increase sperm supply and blood flow. In 2007, the Hong Kong publication Next Magazine reported that fetuses were a trending health supplement in China. They noted that demand had outgrown supply and that buyers were getting their fix directly from hospitals. 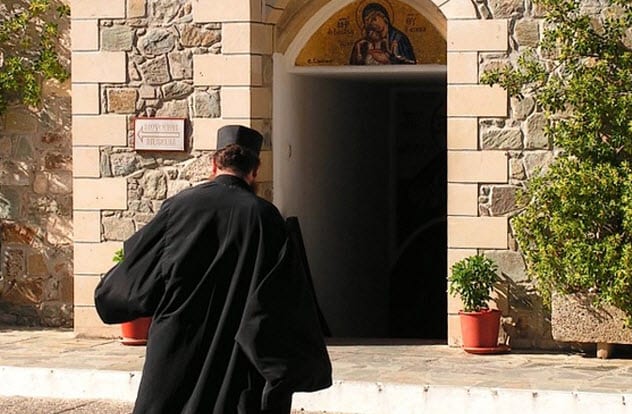 In 2011, a Cypriot monk and two accomplices were arrested at an Athens airport as they attempted to smuggle the bones of a nun out of the country. The monk claimed that the remains were venerated relics that belonged to a saint.

The Cypriot Orthodox Church does not recognize the victim, Eleni Vathiadou, as a saint. Officials suspect that the monk had financial motives for smuggling her bones out of Greece.

However, they admit that sects of the Cypriot Orthodox Church may have venerated Ms. Vathiadou in secret. She had been a nun in Cyprus but died in Greece four years earlier.

The 56-year-old monk only got a slap on the wrist for his actions. He was suspended from his church for a mere three months and charged with theft and desecrating the dead—a misdemeanor in Greece. 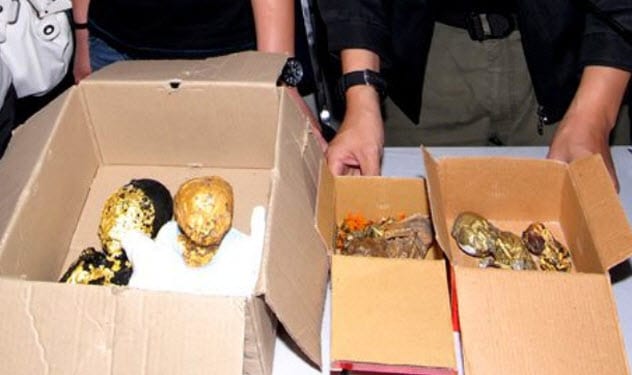 In 2012, Thai police discovered six dead babies in a Bangkok hotel. The infants, aged two to six months, were roasted and wrapped in gold leaf. The macabre collection was found in the luggage of Chow Hok Kuen, a British citizen of Taiwanese descent. Once arrested, Chow revealed a shadowy black market for infant corpses.

The babies were en route to Taiwan to be used in black magic rituals. It is believed that the man purchased them from a Taiwanese merchant in Thailand. Once smuggled into Taiwan, the man could sell the grisly golden haul for six times the purchase price.

The tip-off to Thai police came when they intercepted a communique from a website catering to the black magic needs of wealthy clientele. Chow was one of many in this horrific enterprise. 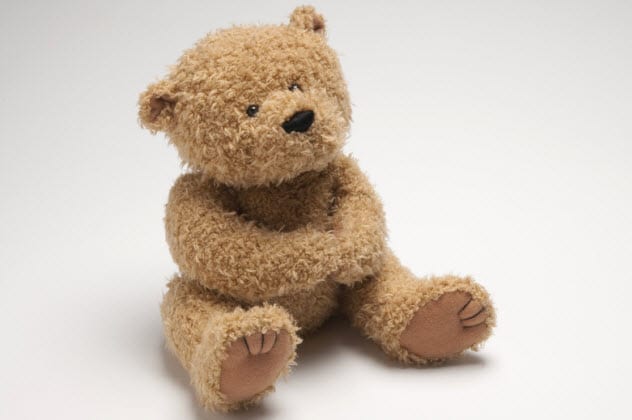 In 2014, a customs agent in Mexico City discovered a horrific find in an unlikely source: a teddy bear. X-ray analysis revealed that a shipment of plush bears contained two human skulls. The recently exhumed remains had been purchased in Mexico City and were en route to the US.

Authorities arrested medicinal herb merchant Fidencio Aparicio Ramirez. He revealed a shadowy black market for human skulls in the US. They are in high demand for practitioners of Santeria—a syncretic religion merging West African beliefs with Catholicism.

The skulls were most likely heading to Southern California and Florida, the centers of Santeria in the US. Possessing human skulls is not illegal in the US if the material has been sourced properly. The grisly bear skulls were definitely not.

In 2007, officials in Jaigaon, India, discovered a shipment of human skeletons en route to the monasteries of Bhutan. The monks planned to turn the bones into blow horns and convert the skulls into chalices. The skeletons originated in the cremation grounds of Varanasi, a city on the banks of the Ganges River.

Eastern India has long been home to a human bone industry and was once the world’s largest supplier of skeletons for anatomical study. The government banned this practice in 1985 due to concerns about harvesting practices.

Today, the legal products come from Eastern Europe and China. However, these products are considered inferior to the Indian variety, which is known for its acid-bleached appearance and high-quality hardware.

As a result, the practice continues in a black market of bones throughout India. The underground market has not improved harvesting practices. Body snatchers typically desecrate graves or loot cremation fires as soon as loved ones depart. 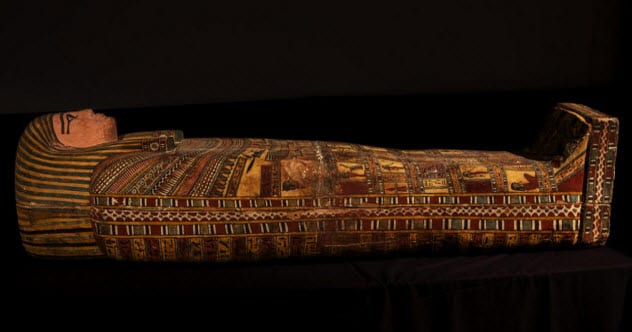 In July 2011, US federal prosecutors announced that they had arrested a mummy smuggling ring. The case involved black market antiquities dealers from New York, Michigan, and Dubai. Along with human remains, there was $2.5 million worth of artifacts: a Greco-Roman style sarcophagus, a nesting set of three sarcophagi, 4,000-year-old funerary boats, and a dozen limestone figurines.

The investigation, dubbed Operation Mummy’s Curse, took eight years. The female mummy of Shesepamuntayesher, which was contained within the nesting sarcophagi, was returned to Egypt.

Smuggling mummies out of Egypt has a long and storied past. It was once so common that the dried corpses were pulverized into a health supplement known as mummia powder. This macabre medicine was commercially available until 1908. 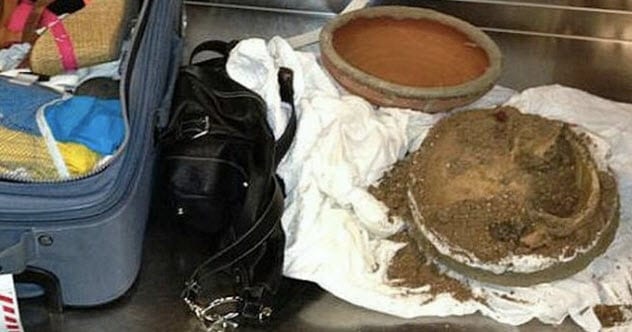 In 2006, airport screeners in Fort Lauderdale discovered a human head in the luggage of Haitian-born Myrlene Severe. She claimed that the head—which still contained skin, teeth, and hair—was intended to ward off evil spirits. Authorities believed it to be part of her “voodoo beliefs.” Transporting human remains unlawfully brings a maximum 15-year sentence in the US.

Skulls have a way of popping up at Fort Lauderdale airport. In 2013, TSA officials discovered pieces of skull in the luggage of two women returning from Cuba. The bone fragments were found in pots filled with dirt. The women claimed that they purchased the pots from a religious curio shop to ward off evil spirits. Whether the duo knew the pots contained skull fragments remains unknown. 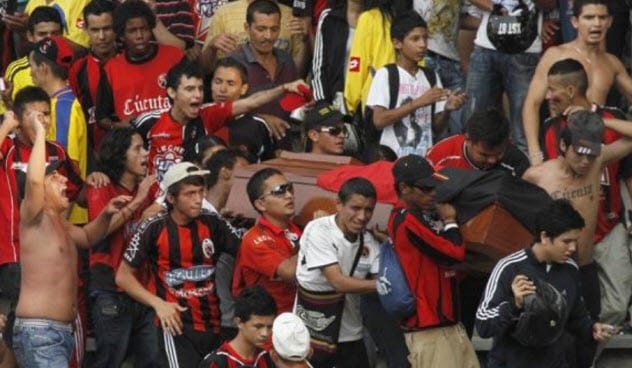 Fans managed to haul a coffin containing a corpse into General Santander Stadium in Cucuta, Colombia, for a “football” match. The deceased was identified as Cristopher Jacome Sanguino. The 17-year-old boy had been gunned down the previous night while playing soccer. His dying wish was to watch his favorite team play once more.

Police remain baffled as to how fans did it, but la barra del indio—a group of hardcore Cucuta fanatics—somehow smuggled in the body. This group was already banned from entering the stadium, but it appears as though they gave police the slip. Cucuta was down 1–0 when the deceased arrived. Afterward, they managed to equalize the game for a tie. 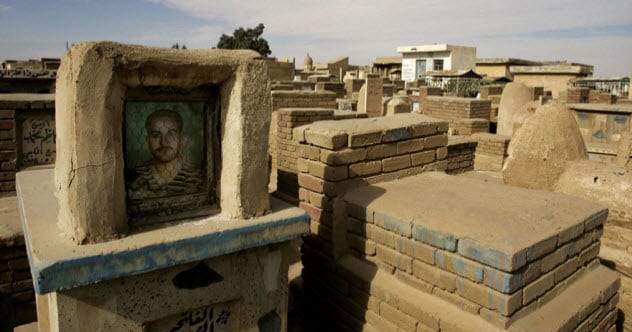 The smugglers of Iraq have a new trade: corpses. Their destination is the holy city of Najaf, which contains Wadi-us-Salaam—a sprawling cemetery where all devoted Shiites hope to be interred.

Starting in the 16th century, the cemetery saw a stream of corpses from around the Muslim world. The Ottomans even taxed the transit. However, the last 30 years of conflict halted the corpse flow—until recently. Once again, burying people there is big business.

Official burials cost thousands of dollars. But corpse smugglers are willing to do the work for less, and business is booming. The work is extremely dangerous. The smugglers use the same routes as drug cartels and gunrunners. Bribes are mandatory, and the penalties are stiff. Recently, an entire funeral party was jailed under suspicion that the body was from Iran. 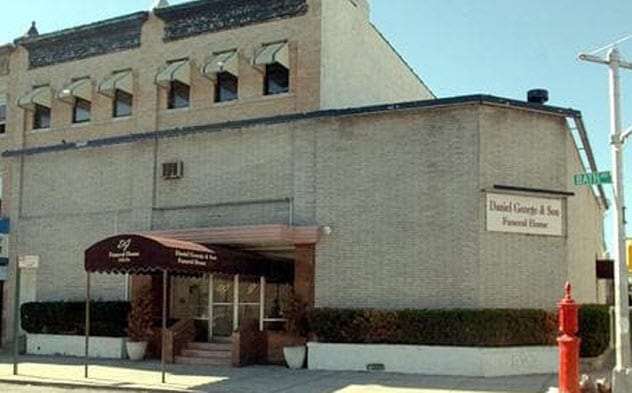 In 2005, the Brooklyn DA indicted four individuals in a multimillion-dollar trafficking ring for body parts. The DA claimed that Daniel George and Son Funeral Home harvested bones, tendons, and heart valves from corpses without consent. They were smuggling these macabre commodities right in front of the noses of the deceased’s loved ones.

After embalming, the bodies were hoisted to a clandestine operating room, which was kept secret from most employees. The technicians removed profitable parts before replacing bones with plastic pipes.

Over four years, the ring harvested parts from 1,077 bodies. By lying about ages and causes of death when the body parts were sold, the ring put the health of patients who received these parts at serious risk. Unscreened tissue can transmit infections and cancer.

Masterpiece Theatre host Alistair Cooke fell victim to their depredation. Despite passing at age 95 of lung cancer, he was listed as 85 and a victim of heart failure. With such high demand, purloined parts will be big business for years to come. 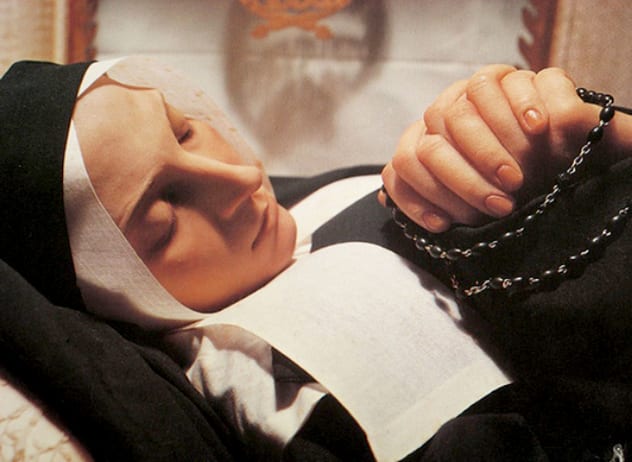 Haven’t had your daily fill of corpses and death? Let us help with that!

Top 10 Human Remains You Can Visit Around The World