Fossilized footprints are extremely rare and informative. By revealing physique, culture, and climate, these ancient fossils allow us to literally walk in the footsteps of our ancestors. With each new find, we realize there are many more mysteries to unravel in the human story. 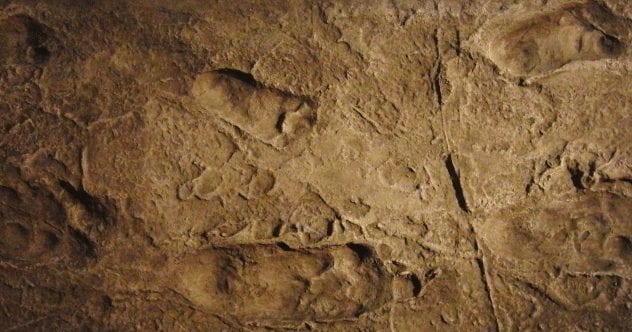 In 1976, anthropologist Mary Leaky uncovered the oldest human footprints in the world. Pressed into a layer of volcanic ash in Laetoli, Tanzania, they date back 3.6 million years. The prints are attributed to Australopithecus afarensis, an ancient hominid whose fossils were found in the same sediment layer. A subsequent volcanic eruption buried and preserved the prints. Originally thought to be the work of a pair, the prints now appear to belong to four different individuals.

These footprints are the earliest example of a hominid walking upright—a quantum leap in evolution. A. afarensis feet were more like modern humans than apes. However, their stride was much shorter. Long limbs didn’t develop until Homo erectus emerged.

The prints are currently covered and would need to be re-excavated for study. Plans to build a $35 million museum over the site are in the works. 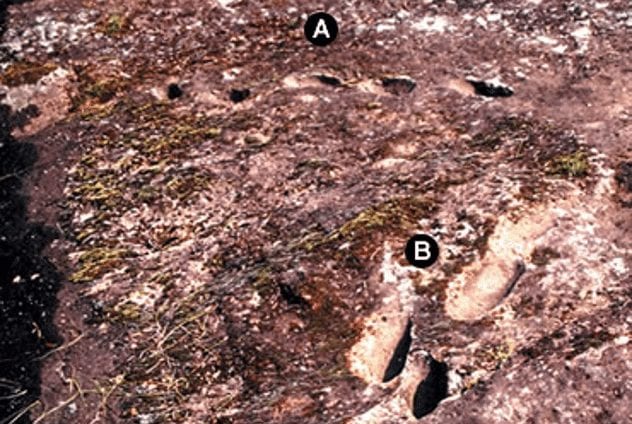 On the western slope of Roccamonfina volcano in Southern Italy, one can find “The Devil’s Trails.” These ancient footprints appear in a pyroclasitc flow dated to between 385,000 and 325,000 years ago. Three individuals scrambled down the face of an active volcano. They not only left footprints, but even occasional handprints where they steadied themselves during the steep descent.

No one is certain who made the footprints, but the most likely candidates are late Homo erectus or Homo heidelbergensis. Many suspect they were fleeing an eruption. Unsettled mineral deposits within the prints, which all lead away from the volcanic crater, support the escape theory.

The tallest of the three would have been 150 centimeters (5’0″). Homo heidelbergensis was a large hominid, reaching over 180 centimeters (6’0″) and weighing over 90 kilograms (200 lb). Some propose this may reflect a case of sexual dimorphism, wherein the females were significantly smaller than males. 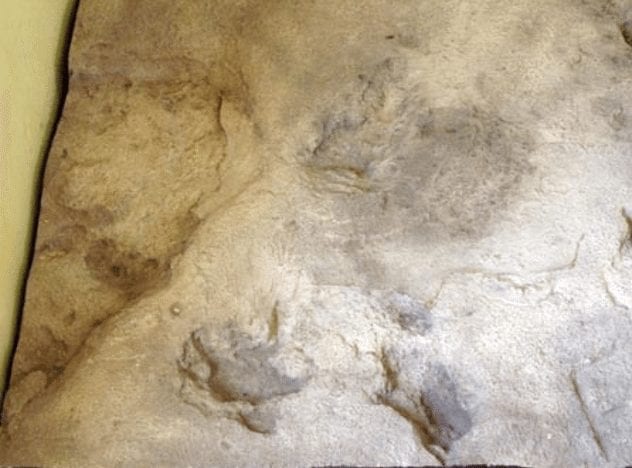 Footprints found in 1997 on a lonely stretch of South Africa’s west coast are the oldest known Homo sapiens prints. They date back to 117,000 years ago and have been dubbed the “Footprints of Eve.” Everything about the prints is thoroughly modern. The only thing that would even raise an eyebrow about the person who made them was that she was short by modern standards—about 140 centimeters (4’7”). Despite her small stature, she was believed to have been a full-grown adult. It also appears that she carried a burden—perhaps a game animal or maybe even a child.

All modern humans are descended from a small group of Africans from between 100,000 and 300,000 years ago. Researchers have long speculated that there is a genetic Eve—one woman at the root of all maternal lines. However, it is extremely unlikely that the person who made these prints was the genetic Eve. 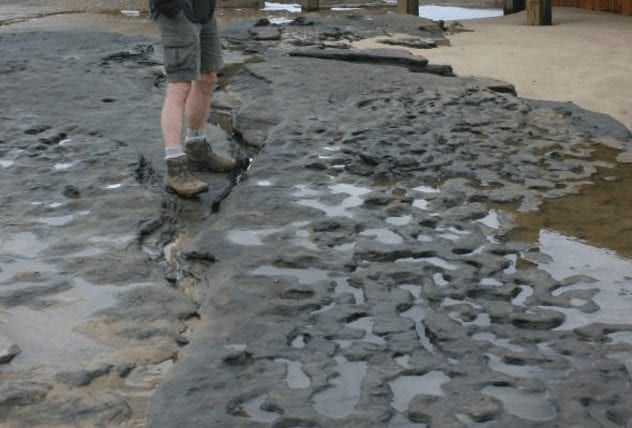 In 2014, on a storm-battered English beach, scientists stumbled upon the oldest human footprints outside of Africa. The prints are 850,000 years old, making them half a million years older than Europe’s previously oldest known prints. The 49 tracks show a mixed-age group heading south along what is believed to have once been the Thames Estuary.

A storm surge exposed the prints. Within weeks, the surf eroded them away. It is sheer coincidence that the team that found the prints was working on another site 180 meters (600 ft) away.

Experts believe Homo antecessor, or Pioneer Man, made the prints. England was connected to the European mainland at the time and had a severe, Scandinavian-like climate. This raises questions about H. antecessor’s clothing, shelter, and fire mastery. These prints are changing the picture of humanity’s migration out of Africa. Experts now believe that hominids may have colonized Britain as many as ten separate times. 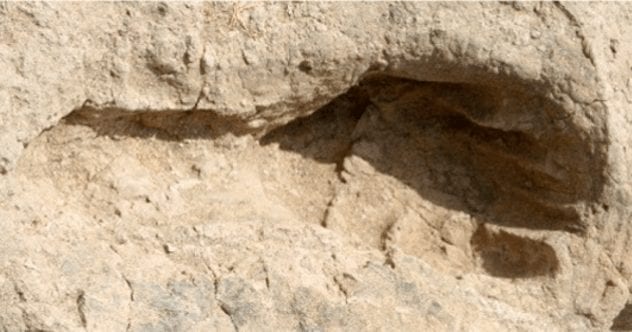 In 2009, researchers found human footprints on the edge of Kenya’s Lake Turkana that date back 1.5 million years. These were far too old to belong to modern humans and have been attributed to Homo erectus. The 22 prints are anatomically modern, with arches, rounded heels, and big toes in line with others. Homo erectus is believed to be the first hominid with long legs and short arms—adaptations for upright locomotion rather than climbing.

The presence of multiple male footprints reflects cooperation—most likely a hunting party. Researchers studied other animal tracks in the area and determined that grasslands bordered the lake. Herbivores moved in a straight line from the grass to the water, whereas the humans moved like predators along the shore. The archaeological record reflects an explosion of stone tools and cut-marked bones following Homo erectus’s emergence. It is likely they were more carnivorous than modern humans. 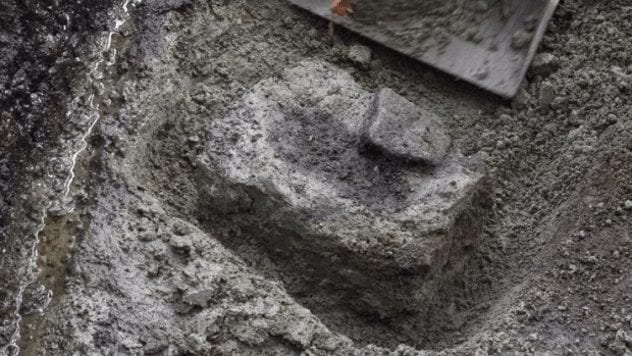 Footprints on Calvert Island in British Columbia may be the oldest in North America. Dated to 13,200 years ago, they belong to three individuals believed to have been a family. If the prints turn out to be as old as expected, they would also be the earliest evidence of people living in British Columbia. Investigating the prints is extremely hard because they are in an intertidal zone, which forces archaeologists to work fast.

More tests need to be performed before researchers can authenticate the ancient date. Nearby material was just 2,000 years old. However, previous radiocarbon dating was done on the footprint material itself. The find adds to the mounting evidence that North America was first settled along the Pacific coast. Previously, experts believed people had moved south through an ice-free corridor east of the Rockies. There is still much to learn about the prints and the people who made them. 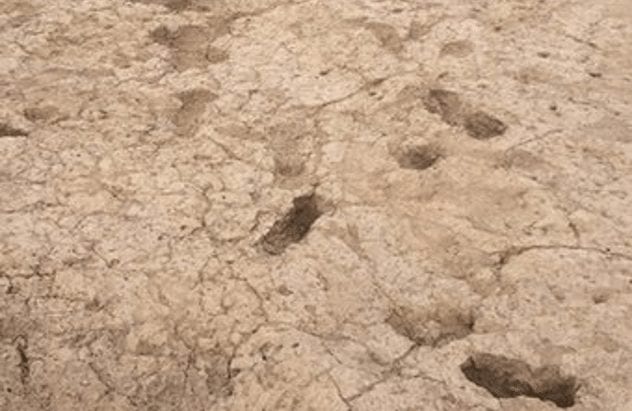 In 2015, a construction crew unearthed ancient footprints around Tuscon. Dating back between 2,500 and 3,500 years ago, the prints provide a snapshot into the Hohokam settlement during a transition between hunter-gathering and agriculture. The footprints belong to a man, a woman, children, and a dog. They were set deep into the soft earth of an irrigated field, which was later inundated with sediment. The prints were made during the opening and closing of an irrigation system’s floodgates.

Debate rages over whether irrigation agriculture was a homegrown technique of the Hohokam or was developed in Mesoamerica. Some even speculate that this settlement reflects a migration out of Mexico. Others disagree, pointing out that there is no older evidence of irrigation agriculture in Mesoamerica. Furthermore, other cultural and technological advancements occurred simultaneously in Mexico and Arizona. A possible scenario is that there was a great deal of cultural exchange between the two regions. 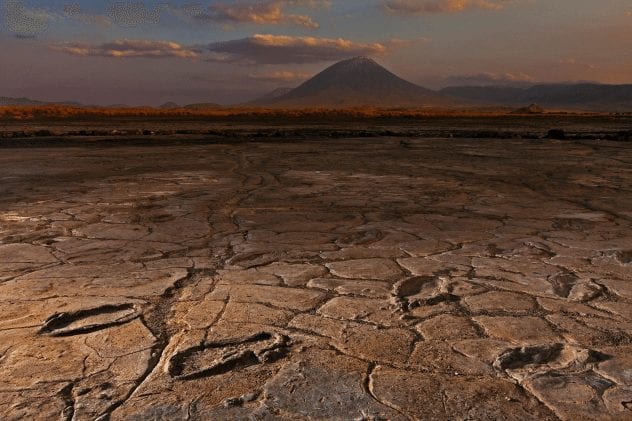 In the shadow of a Tanzanian volcano that the Masai call the “Mountain of God,” researchers unearthed a treasure trove of ancient footprints. The 400 prints date back to 19,000 years ago and are the highest concentration ever found. Some of the prints show that people were jogging. Others had broken toes. Many reflect mothers walking alongside children. One area has so many prints that it has been dubbed the “dancehall.”

Dating the footprints proved challenging. The team initially thought that they were made in ash that rained down after Ol Doinyo Lengai erupted. That would have meant that the ash and the prints were 120,000 years old. They later realized that the ash had been carried to the site via water. The task than involved dating the youngest crystals in the mud to set a cap on the footprints’ age. 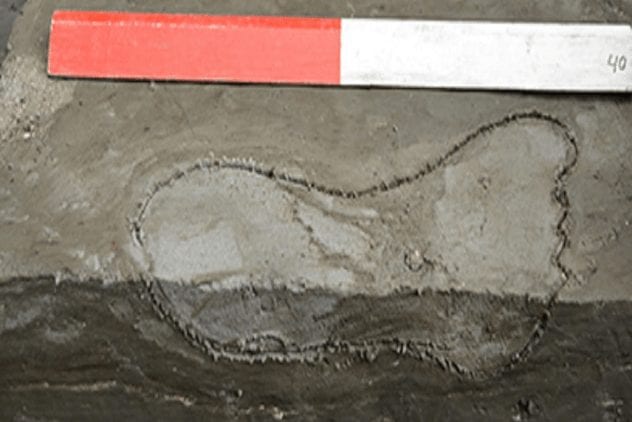 Two sets of 5,000-year old prints on the island of Lolland in Denmark reveal how ancient humans survived along the sea—and dealt with its destructive power. The prints show the struggle of two Stone Age fishermen against the sea as it threatened to flood and cover their equipment with sand. The fishing gear consisted of thin switches of hazel suspended between two larger sticks. Series of these were set up in a continuous line to create a fish traps.

The footprints show that the fishermen were forced to wade into the icy waters of the Baltic in an attempt to save their traps from a flood. During the time the prints were made, Baltic Sea levels rose dramatically from Northern Europe’s melting glaciers. A collection of animal skulls suggests that the fisherman were making sacrificial offerings in the area. Was it a desperate attempt to keep the sea at bay? 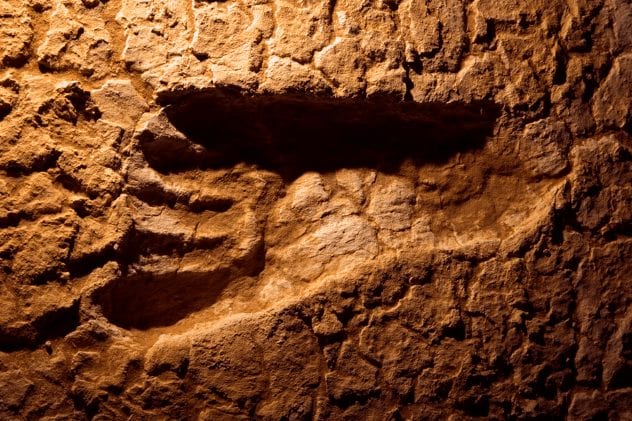 In 2003, a Mutthi Mutthi Aboriginal woman found the oldest known footprints in Australia. Located among the dunes of Willandra Lake region, the prints are dated to 20,000 years ago. They are the largest collection of Pleistocene footprints in the world with nearly 700 prints, 400 of which are grouped into 23 tracks. The footprints have remarkable detail, with mud oozing between toes. They reveal things that artifacts and skeletons can’t.

Trackers from the Pintubi people of central Australia were called in to investigate. They found prints of a one-legged man that experts had missed. The trackers also pointed out nuances like a small hole where a man stood with spear and squiggles that might have been drawn by a child. One hunter was believed to have been running 37 kilometers per hour (23 mph)—as fast as an Olympic sprinter—indicating an intense struggle to survive in this ancient land.