We do some strange things in pursuit of beauty. Women around the world get up early to stare in their mirrors, paint their faces, and pluck their eyebrows. We spend fortunes on fashionable clothes and do some absolutely destructive things to our bodies just to keep to a standard of beauty.

Over time, the concept of beauty has changed—a lot. The generations that came before us had their own ideas about what looked good, and some of those seem completely bizarre today.

10 Gluing A Unibrow On Your Head 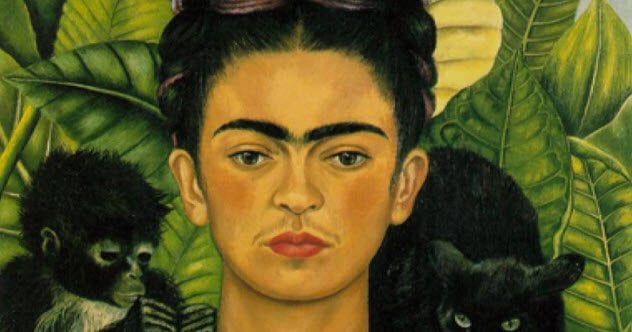 In ancient Greece, there was nothing more unsightly than a woman with two clearly separated eyebrows on her head. If a woman wanted to exude sophistication and beauty, she needed a long, black, caterpillar-like line of hair stretching across her brow.

According to ancient Greeks, unibrows were the sexiest accessory that a woman could wear. Women dabbed black powder on the hair between their eyebrows to make it stand out and look as full as possible.

If a girl was unlucky enough to be born without any hair between her eyes, she would make do. Some would rub black soot between their brows. Others dyed goat hair black, dabbed some tree resin on the back, and attached it to their heads. 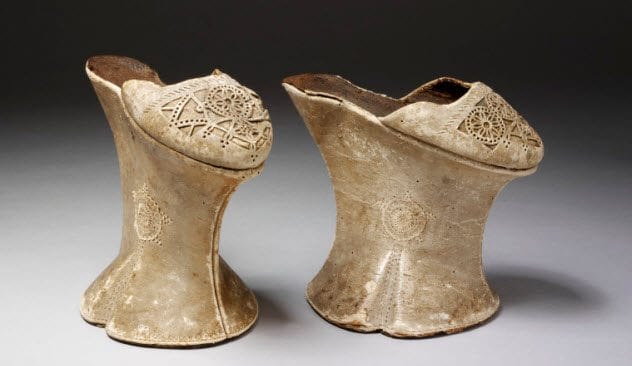 In the Middle Ages, Florence was the style capital of the world. There, the ladies pulled out every stop to make sure that they looked good. No trend, though, compared to the dignity and beauty of wearing chopines, platform shoes with massive wooden heels that were sometimes more than 0.6 meters (2 ft) tall.

The look became so popular that it spread to men, too. Since people were essentially walking on stilts, getting around was pretty hard. But Florence’s fashionistas made do by hobbling with canes.

Most people outside of Florence thought that the look was ridiculous. Some even called it “sinfully vain.” The church, though, begrudgingly accepted it. At the very least, they accepted that wearing chopines kept women from dancing—and that, after all, was the worst sin of all.

8 Dropping Poison In Your Eyes 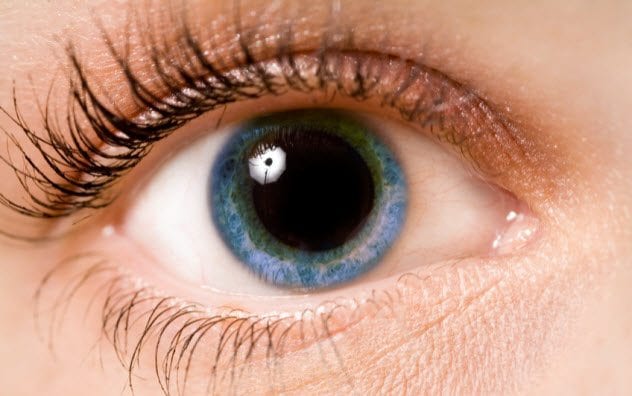 Nightshade is one of the most toxic plants in the world. If you slip a little of its poison into someone’s drink, you can send them into a coma. If you add a little extra, you can kill them. In Renaissance Italy, though, women poured it straight into their eyes.

The Italians called it belladonna (“the beautiful lady”) because a drop of poison in your eyes would dilate your pupils, making it look like you were permanently aroused.

It also blurred your vision and accelerated your heart rate. If you used too much of it, you could go blind. Still, that was a small price to pay to look good. 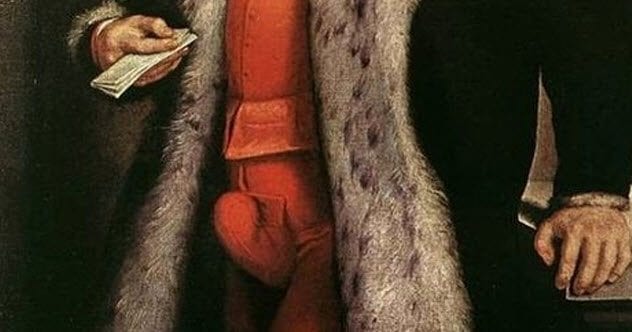 Civilizations throughout history have unanimously agreed that bulging penises are just a good look. In England, the fad has gone in and out of style for the past 500 years. First, we had codpieces, which were originally practical and discreet covers for little openings in men’s tights.

By the time of Edward IV, though, men had realized that the accessories on their crotches could look like massive penises. By Henry VII’s era, codpieces had ballooned to cartoonish sizes.

Codpieces died out when Elizabeth I was put in charge, but men brought penis bulges back. By the Georgian era, men were putting the tightest crotches possible on their pants to show off what God had given them.

Under the pressure of fashion, the horribly obese put on their tight pants, too. It was soon agreed that it was in the public interest to wear something that left a little to the imagination. 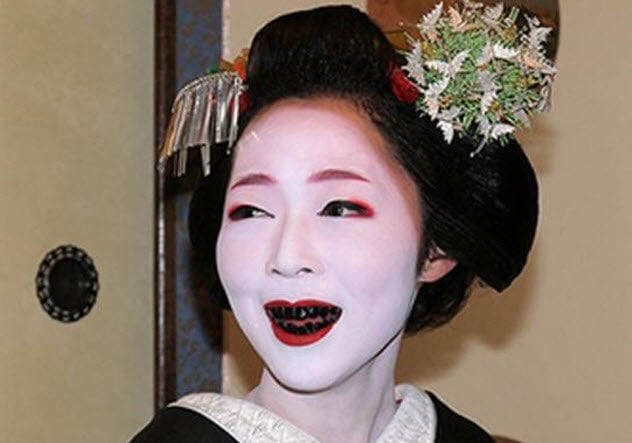 Until recently, women in Japan took dentistry in a different direction. They agreed that tooth decay was one of the best looks out there. So if a woman’s teeth weren’t falling out on their own, she’d paint them black.

The Japanese mixed hot water, sake, and red-hot iron in a pot and let it sit for five days. A black scum would rise to the top, which they would scrape off and rub on their teeth.

Eventually, the look went out of fashion. In 1870, it was banned outright, but that was nearly 1,000 years after it started. Japanese people spent the better part of a millennium trying to look good by imitating tooth decay.

5 Cutting A Gash In Your Cheek 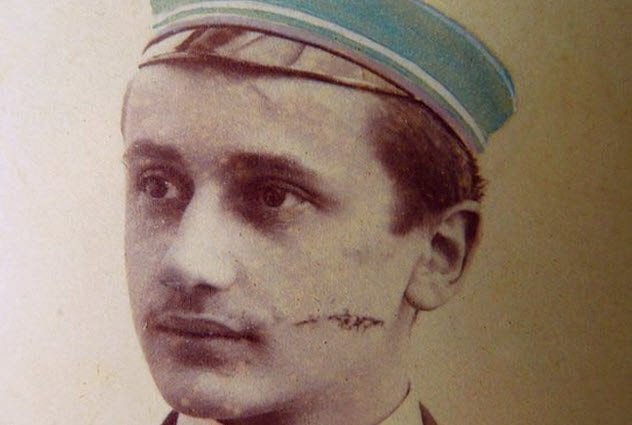 Nothing shows you’re tougher than a bleeding, porous wound gaping out of the side of your face. To Germans in the late 19th century, getting cut up was the best look a man could wear. They actively went out of their way to scar their own faces.

Cutting yourself didn’t count, so schoolboys regularly challenged each other to duels. Although the man or boy put on a fencing mask to protect his eyes and throat, he deliberately left the rest of his face open and tried to let his opponent get a couple of cuts in.

Afterward, the man scarred up his own wound to make sure that it left the biggest gash possible. The truly fashionable went right back to dueling. Reportedly, one man left his friends in awe by walking around with 14 scars on his face.

4 Wearing One High Heel With One Low Heel 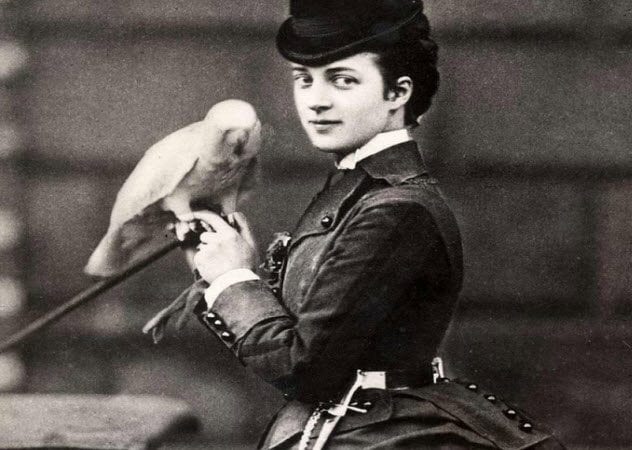 Alexandra of Denmark was a trendsetter. She was the prince’s bride, and every look she wore was copied across the country. If she put on a new dress or accessory, women of the world rushed to stores to buy it. When she contracted rheumatic fever and was left with a debilitating limp, they copied her again.

At first, women just went through their own wardrobes and found two mismatched shoes. They wanted to stumble around with the same clumsiness that made the prince’s bride so fashionable. Stores, though, soon caught on, and they started selling “Alexandra Limp” shoes with one high heel and one short heel.

Women walked the streets with mismatched shoes, carrying a cane and playing up the awkwardness of their steps. They knew that nothing said beauty quite like a woman who had trouble staying upright.

3 Wearing A Lightning Rod On Your Head 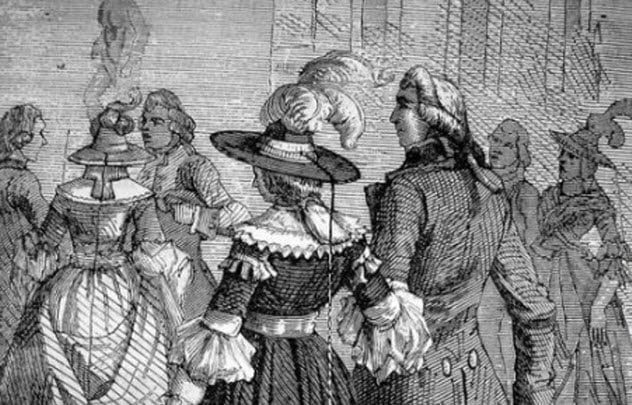 When Benjamin Franklin put a key on a kite and flew it through a lightning storm, he did more than further science. He furthered fashion.

Apparently, women in Paris worried about the risk of being struck by lightning every time they stepped outside. So they picked up on Franklin’s idea and started a new trend: lightning hats.

The elite went outside with metal rods attached to their heads. The rods draped to the ground. The exceptionally fashionable would also carry an umbrella, again equipped to send electric currents to the ground.

There’s no record of any of these women getting hit by lightning, so it’s not entirely clear whether the hats worked. They were sold primarily to the wealthiest and most fashion conscious of all. So even if the hats didn’t work, the important thing was that the women looked great wearing them.

2 Wearing Seven Shirts At Once 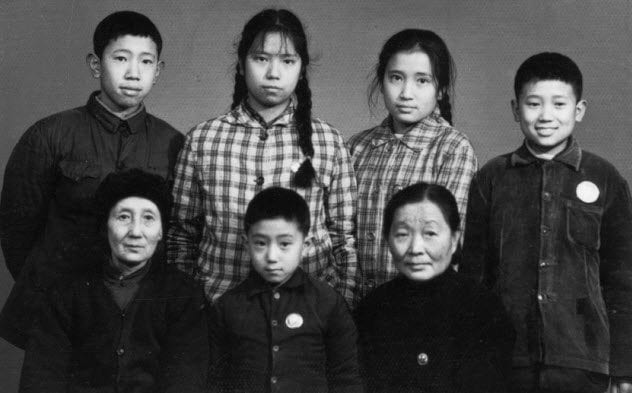 Mao’s Cultural Revolution changed fashion. The dignified and respectable wore Mao suits with upturned collars that were distinctly Chinese. Others wore army uniforms to show their dedication to the party. And some gang members started the greatest fashion trend of all—wearing as many shirts as possible.

According to writer Jung Chang, a fashion trend for boys in the Cultural Revolution was to put on multiple undershirts, pop all of their collars upward, and then put a jacket on top. They believed that the more shirts you wore, the more intelligent you were. Apparently, nothing showed off a clever mind like wearing eight layers of clothing in the summer.

The record holder appears to be a boy who wore seven shirts at once. For extra fashion, he paired these with sneakers that didn’t have laces. 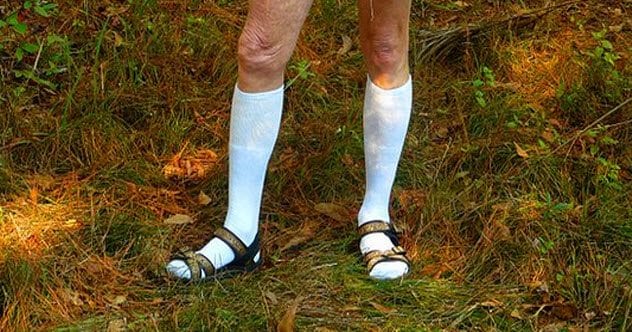 Ancient Rome brought us the most disturbing fashion of all: socks with sandals. Despite the taboos of modern life, our earlier ancestors went out boldly and proudly wearing open-toe sandals with socks underneath.

This isn’t something we learned easily. It took years of work by multiple teams of archaeologists and historians, all dedicated toward finally determining the kind of footwear combinations that the Romans used. Now we finally have “unequivocal evidence” that they wore socks with sandals.

The socks were knitted from wool and went all the way up to the knee. Then the Romans would combine the look with open-toe sandals. Apparently, wearing sandals without socks is a relatively new phenomenon.