The shifting sands of the Sahara have swallowed animals, people, and entire cities over eons. It is the largest hot desert in the world, and those who become lost in its endless sandy plains are likely to never be seen again. In the ancient world, whole armies were known to march off across it, never to be seen again.

Only now, with modern technology, are we beginning to penetrate all of the Sahara’s mysteries—and there are quite a few of them. Here are ten amazing discoveries that the Sahara Desert has been hiding from us. 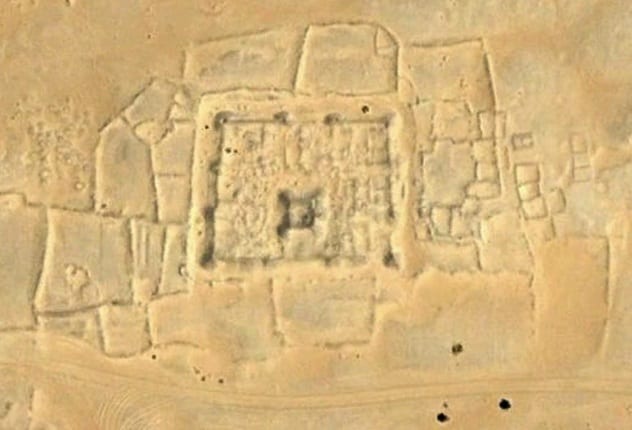 Satellites have allowed explorers to peer beneath the canopies of the densest jungles and pierce the heart of the most inhospitable deserts—all without the bother of even leaving one’s chair. In 2010, satellites detected the remains of more than 100 fortresses belonging to the Garamantes people of Libya.[1] The area had been well-mapped by the oil industry searching for places to drill, so archaeologists were able to scan their satellite pictures for the telltale signs of walls. Later, researchers on the ground were able to confirm that the structures were indeed built by the Garamantes, though their expeditions were cut short by the revolution in Libya which toppled Colonel Gadhafi.

At the time the Garamantes flourished (approximately the second century BC to the seventh century AD), the area they lived in was already incredibly arid. To farm their land, they constructed underground channels that provided water from ancient reservoirs. When this water source failed, the fields withered, and the Sahara covered over the remains of the fortresses and villages. 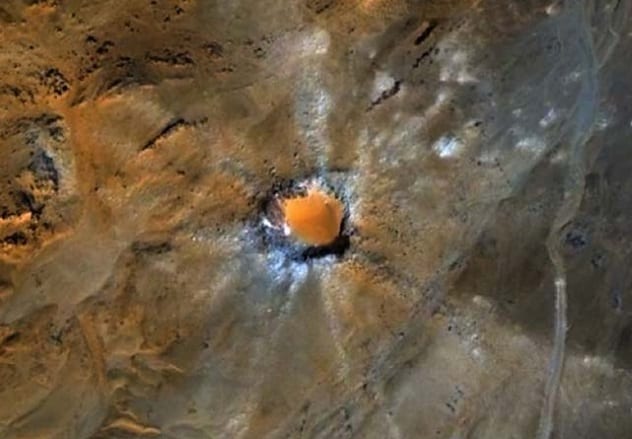 The Earth has always been bombarded by rocks and meteorites from outer space. Most burn up harmlessly in the atmosphere, leaving nothing more than a streak of light across the sky. Others reach the ground and have devastating impacts. Because most happened in the distant past, the craters left behind by such impacts are often overlooked because erosion or plant growth covers them up. In deserts, however, the scars can still be seen. The 45-meter-wide (148 ft) Kamil Crater in Southwestern Egypt still obviously indicates where an iron meteorite struck around 5,000 years ago.[2]

It is not just the craters left by meteorites that can be found, however. Around the Kamil Crater, fragments of the meteorite itself have been discovered from where the impact shattered it and scattered it across the sand. This is not an isolated discovery. Almost a fifth of all meteorites that have been recovered have come from the Sahara. This is because on the sands, meteorites stand out, often just waiting to be picked up. Only the snows of Antarctica provide a better place to go meteorite-hunting. 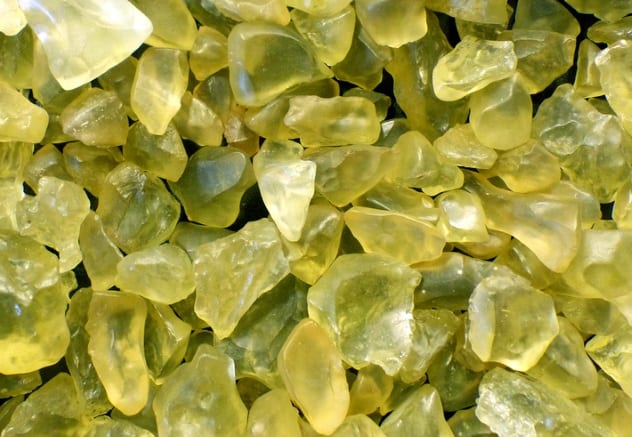 Even when the remains of meteorites and their craters have vanished, other traces of cosmic collisions can remain. Around 29 million years ago, a meteorite struck the Earth with enough energy to melt a vast region of the Libyan desert into sheets of delicate green glass.[3] The crater left by this explosion has yet to be found, but plenty of the desert glass still exists—and in some unexpected places.

When Howard Carter opened the tomb of Tutankhamun, he discovered among the treasures a jeweled breastplate (also referred to as a pectoral) belonging to the dead king. At its center was a sacred scarab beetle carved from green glass. The Egyptians probably had no idea of the origin of the glass they used, but intriguingly, there was another artifact made from otherworldly material. One of the daggers in the tomb was created from iron that came from a meteorite. 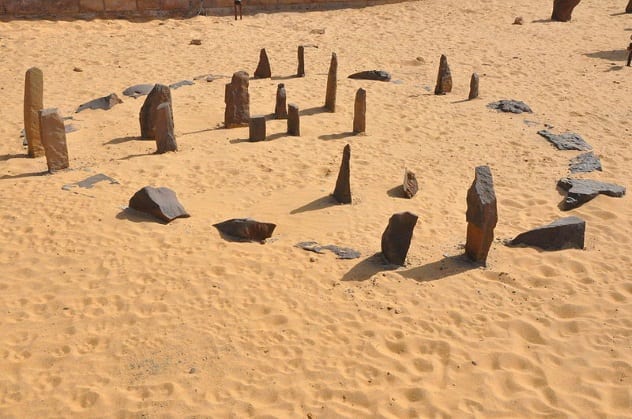 Wherever water can be found in a desert, you will find life clinging on. When people lived near Nabta Playa in Southern Egypt 9,000 to 6,000 years ago, the area was subject to annual flooding, which created a lake. Neolithic tribes came there to feed and water their animals.[4] These people not only survived there, but they developed a culture of sacrifice. Cows, sheep, and goats have all been found ritually buried there.

Around 6,000 years ago, the people at Nabta set up large stone blocks in a circle, with more slabs of rock radiating outward. (A mock-up is pictured above.) It has been claimed that this stone circle, which predates Stonehenge by 1,000 years, is the earliest known astronomically aligned structure. There is still debate as to what exactly the circle points to, but one researcher claims that it lines up with the position of Orion’s Belt, as it would have appeared in the sky 6,000 years ago. 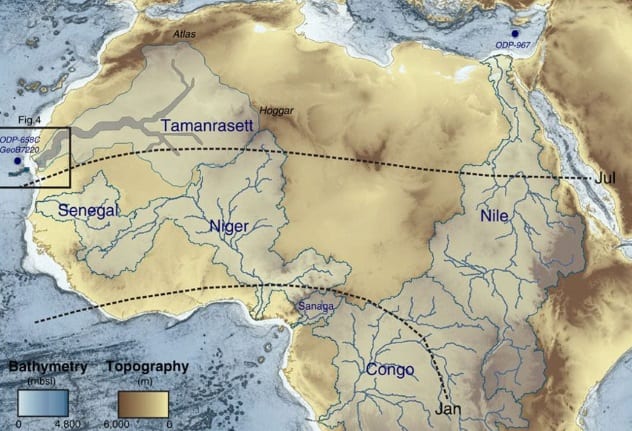 The Sahara Desert has not always existed. As the climate changed over millions of years, the borders of the sands have shifted. Just as scientists can search for ancient evidence of water on Mars, so have they turned their attention to the history of the Sahara. Research has revealed that what would once have been the world’s 12th-largest drainage basin flowed from within the Sahara.

The remains of the river in Mauritania were noticed when an undersea canyon off the coast was discovered that had been carved by the river. River sediments also turned up in unexpected places. The final confirmation of the presence of a lost river was made by satellite.[5] The lost river is now called the Tamanrasett River, and research is continuing to discover more about a body of water that may have dried up just 5,000 years ago. 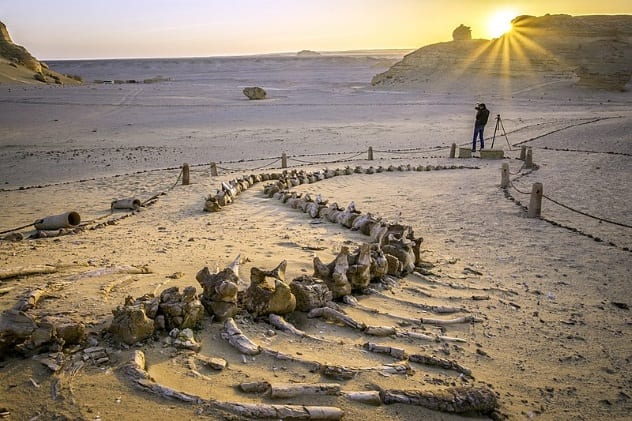 It’s not just rivers that have disappeared under the Sahara. Over geological time, what was once an ocean has become one of the driest places on Earth. In Wadi Al-Hitan in Egypt, evidence of the lost Tethys Ocean can be found. Known as Whale Valley, it is one of the best, if unlikely, sites for discovering whale fossils.[6] The fossils here give insights into how whales evolved from land-dwelling creatures to ones that spent their entire lives at sea.

When the ancestors of modern whales died in the sea 37 million years ago, their bodies were covered with sediment. As the crust of the Earth rose, their former home was turned to land. Today, the 15-meter-long (50 ft) skeletons are being studied by paleontologists, as are the creatures they shared the sea with. Beside the whale bones, the teeth of large and vicious sharks have been found. 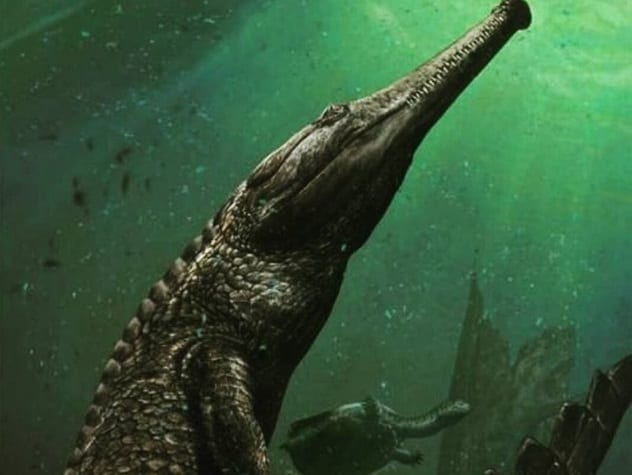 The seas have always been home to monsters. Some 120 million years ago, a 9-meter-long (30 ft) crocodile, Machimosaurus rex, called what is now the Sahara Desert its home. M. rex is the largest ocean-dwelling crocodile known to have existed. The area where M. rex once lived was probably a vast lagoon which stretched to the Tethys Ocean. There, it used its huge head, incredible bite strength, and short, brutal teeth to crack the shells of ocean turtles and snatch fish.[7] It may also have scavenged on the carcasses of the large creatures which also shared its home.

If it seems ironic that so much marine life is being uncovered in the Sahara, it’s really because the desert is so inhospitable to life that paleontologists are making so many discoveries there. Without plants and soil getting between them and the rocks beneath, scientists are often able to simply stroll through eroding areas to pick up amazing findings. 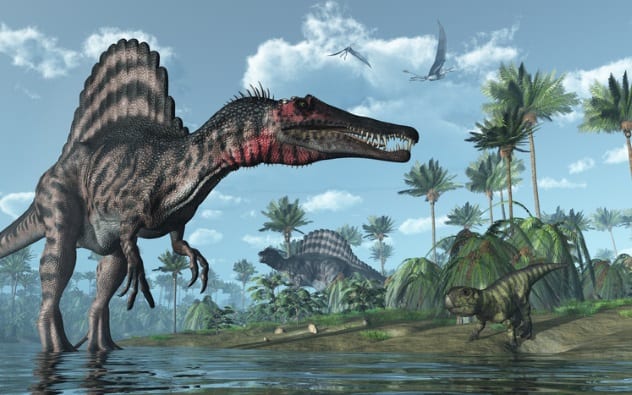 Continuing the theme of nautical discoveries made in a desert, Spinosaurus is the largest carnivorous dinosaur ever discovered. Living 95 million years ago, Spinosaurus (aka Spinosaurus aegyptiacus) stood around 7 meters (23 ft) tall and measured 16 meters (52 ft) long, exceeding the better-known T. rex. Spinosaurus looked, and lived, nothing like its better-known rival. Spinosaurus had a huge sail of bones sticking up from its back and a number of other adaptations that have baffled scientists. Now, it is thought that Spinosaurus is the only known truly semiaquatic dinosaur.

Since the bones of the originally discovered Spinosaurus were destroyed in World War II, it was not until another set of fossils were discovered in Morocco that researchers were really able to study Spinosaurus. Among the evidence pointing to Spinosaurus living partly in the water are its long, flat feet for paddling, as well as the nostrils placed high on its snout to allow it to breathe even when mostly submerged.[8] Seeing the huge sail on its back approaching must have chilled inhabitants of ancient waterways in much the same way a shark’s fin does for us today. 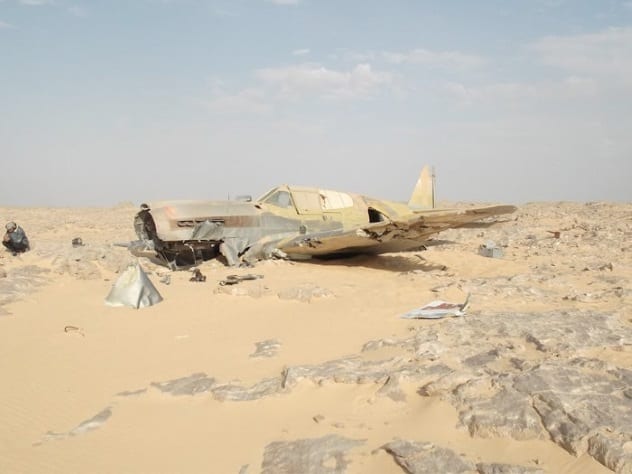 On June 28, 1942, Flight Sergeant Dennis Copping was flying a damaged P-40 Kittyhawk to a British base in the desert for repairs. Somewhere on the journey, both the aircraft and its young pilot disappeared.[9] Only in 2012 were the remains of the plane discovered when an oil worker stumbled across them. The aircraft was mostly intact, having never been disturbed, and there was still evidence of a parachute having been used to create a shelter.

The plane was later taken to El Alamein Museum and restored—not to everyone’s satisfaction. Some felt the aircraft should have remained where it was as a memorial to its young pilot. Others thought that the restoration job the museum did made it look like poorly painted model. While the plane was recovered, no signs of Dennis Copping were found. His exact fate is another mystery that the Sahara is holding. 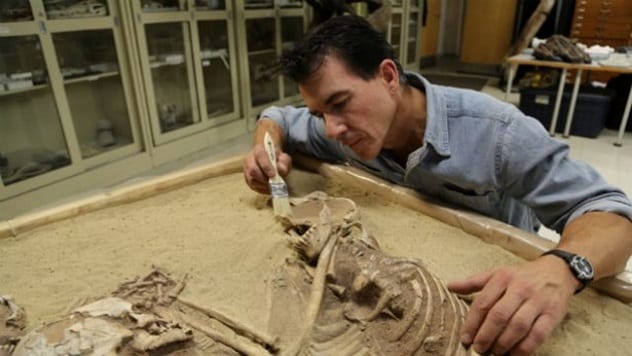 Paul Sereno has already featured on this list, as he was part of the team which found more fossils of Spinosaurus. It was during one of his dinosaur-hunting trips that he accidentally found the largest human graveyard in the Sahara. The site at Gobero in Niger was inhabited as early as around 10,000 years ago and shows that it was once a more green and lush environment. The remains of fish, crocodiles, and other animals are mixed in among the humans.[10] Many of the discoveries were simply poking out of the sand. Two years of excavation revealed around 200 human burials and pointed to two separate periods of habitation separated by more than 1,000 years.

The Kiffians and the Tenerians both left traces of their lives behind. Bone jewelry and arrowheads were discovered alongside harpoons that would have been used to hunt in the nearby waters. Many of the burials were strikingly unusual. One man was buried with his head in a pot, while another rested on the remains of a turtle shell. Perhaps we will never know exactly how these people lived and died. The Sahara is not giving up all its secrets.

Read about more facts and mysteries of the world’s deserts on 10 Unsolved Desert Mysteries and 10 Surprising Things We’ve Learned From The Desert.