Mosaics have graced floors, walls, and ceilings for millennia. Made of thousands of interlocked tiles, their sturdy construction makes them nearly indestructible. Their design is simultaneously ancient and modern as the precursor to both impressionism and pixel-based graphics. Mosaics endure—and so do their mysteries. 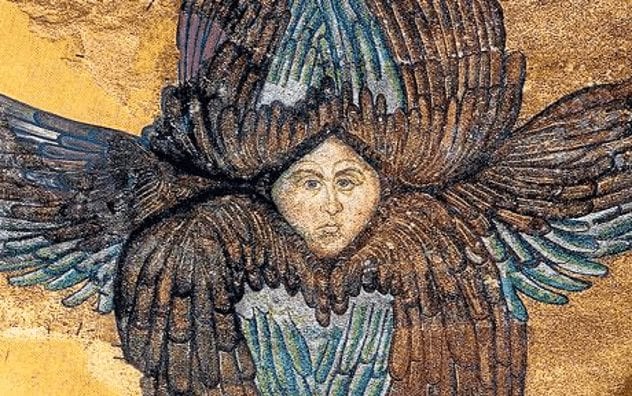 An image of a six-winged angel has been revealed in Istanbul’s Hagia Sophia. The mosaic depicts a seraph, a member of the angelic choir, the highest order of angel hierarchy. For 160 years, the image was hidden under a metal mask and seven layers of paint. The image appears on pendetives (curving triangular surfaces) on the central dome and is believed to be 700 years old. The image remained hidden due to the ban on representational images in Islam.

The seraph was uncovered during restoration work. Swiss architect Gaspare Fossati is believed to have been the last person to have seen the angel. In 1839, Fossati led a rebuilding of the church under Sultan Abdulmejid. The Hagia Sophia is built on a fault line and has been devastated by earthquakes throughout the centuries. In AD 558, a tremor caused the dome to collapse, along with the altar.

9 Map Of A Secret Burial Site 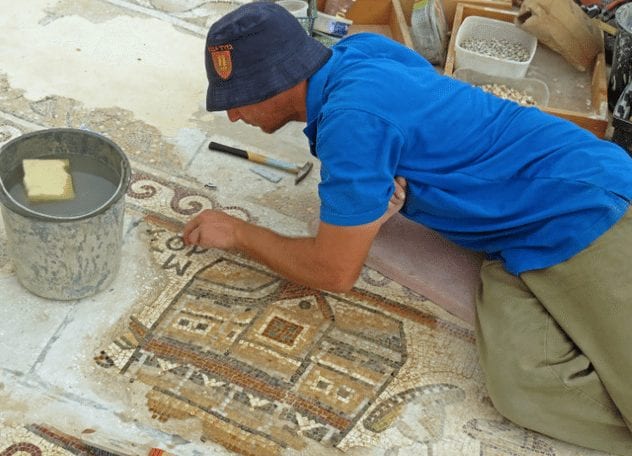 Excavations for an industrial park in Kirayt Gat, Israel, revealed a mysterious mosaic. The 1,500-year-old image served as the floor of a long-destroyed Byzantine church. It depicts a map of the Egyptian city of Chortaso. The city is believed to be the burial site of Habakkuk, an Old Testament prophet. Christian tradition holds that Habakkuk’s final resting place is unknown. Both Israel and Iran lay claims to the prophet’s grave. The location of the burial is believed to tie into the origins of the congregation.

Map mosaics are extremely rare in Israel. The Kirayt Gat mosaic depicts buildings in startling three-dimensional detail, including balconies, windows, and even tiles. Roosters, deer, and birds appear on one sector of the pavement. A Nile River scene appears in another area of the mosaic. The work was composed in tiles of 17 different colors. The detail and craftsmanship are unrivaled in Israel’s mosaics. 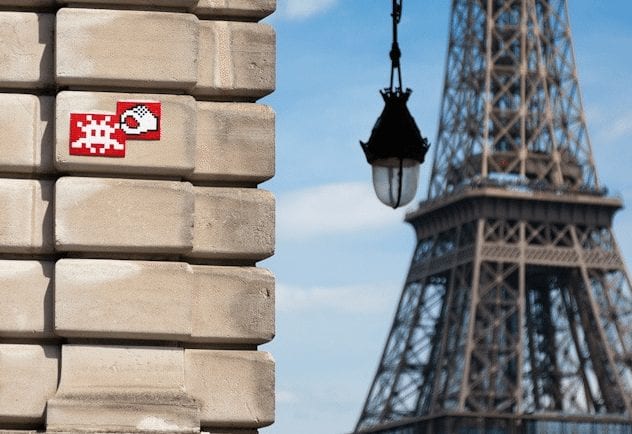 Since 1998, a mysterious French artist has been placing his signature mosaics around the world. Dubbed “Invader,” the street artist’s work depicts images from the classic video game “Space Invaders.” His works have appeared in Paris, Kathmandu, Mombasa, Hollywood, and nearly everywhere in between.

In 2013, Invader had a residency in New York City. He branched out by portraying iconic inhabitants of the Big Apple like Joey Ramone, Lou Reed, Andy Warhol, and Woody Allen. The targeted vandalism of the latter may be in response to Allen’s controversial marriage to his stepdaughter.

Invader’s identity remains unknown, but he has been able to develop an income from his work by accepting public commissions and selling “aliases”—single copies of his street work, starting at $15,000 a pop. So far, the elusive, ninja-like artist has installed over 3,000 works worldwide. In 2015, an Invader piece even made it onto the International Space Station. 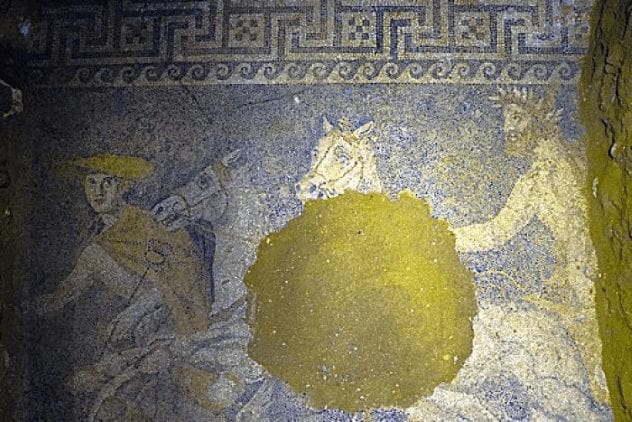 A giant mosaic has been unearthed in the largest ancient Greek tomb ever discovered. Located in Amphipolis in Northern Macedonia, the work depicts a chariot pulled by white horses. There are two figures: a bearded, laurel-crowned driver and Hermes. The mosaic dates to the fourth century BC. It is the largest in the tomb at 4.5 meters (15 ft) by 3 meters (10 ft). It has yet to be fully uncovered. Archaeologists can only guess as to what they will see when it is fully revealed.

Dated to the period of Alexander the Great, the tomb’s magnificence suggests it held someone powerful. Amphipolis was a power center of the Macedonian Empire. Alexander’s wife, Roxana, and her son were exiled to Amphipolis and executed under the orders of King Cassander in 310 BC. The tomb might have contained a general named Olympias, the king’s mother, or possibly even Roxana. No experts believe the grave belongs to Alexander himself. 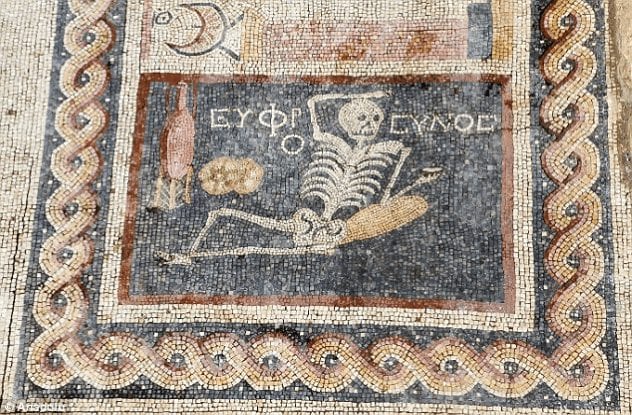 In 2016 in Hatay, Turkey, archaeologists uncovered a mysterious mosaic with overtones of death. Dating to the third century BC, the work contains a reclining skeleton offering sage advice: Be cheerful, and live your life. A bottle of wine and bread accompany the laid-back skeleton. The art once served as the centerpiece for an elegant villa in the ancient Greek city of Antioch. This city was a center of the early Church and may be the place where followers of Jesus were first referred to as “Christians.”

Skeleton mosaics have been found throughout the ancient world. The white figures pop out against the mosaics’ black backgrounds, making a powerful visual impact. The skeleton theme was particularly popular in the tile art of Pompeii. Some even bore mottos like “know thyself.” These Italian skeletons seem to lack the fun-loving nature of their Turkish brethren. 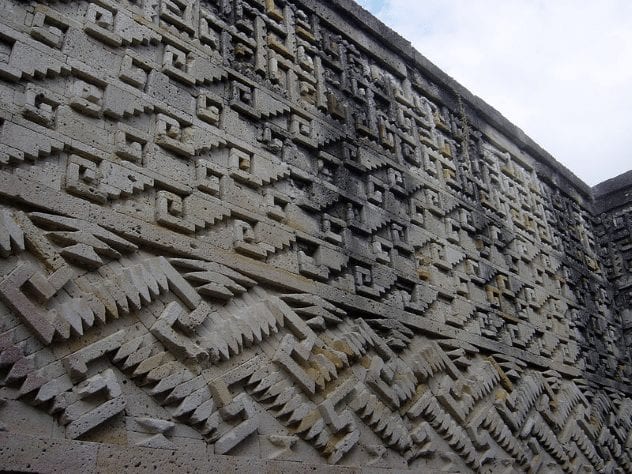 The ancient Mexican site of Mitla is best known for its mysterious mosaics. The artworks are found everywhere there, indoors and outdoors. They appear on municipal buildings, palaces, and tombs. There are six basic patterns. The individual designs are bound together in horizontal bands. Some suggest that this arrangement, which offers more than 100 different configurations, is a coded language.

Each polished stone is individually carved and slotted together like a jigsaw. The placement is so precise that no mortar is required. Even with modern technology, the accuracy of the Milta mosaic’s stonecutting would be cost prohibitive. Experts believe the decoration work would have cost ten times more than the buildings they adorn.

There is no doubt that these mosaics had deep symbolic significance. What they meant remains a mystery. In the 16th century, the Spanish harvested stone from Milta to build the nearby Church of San Pablo. 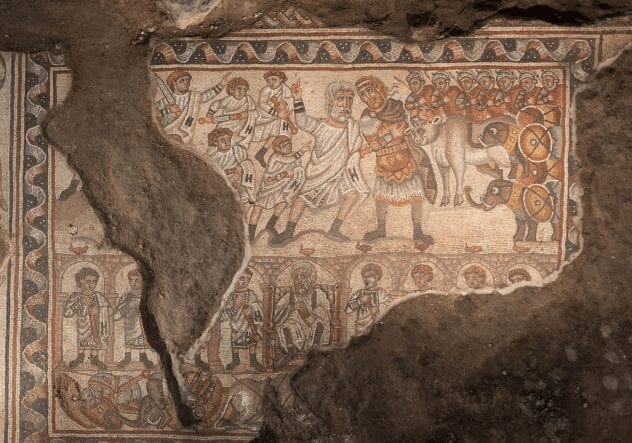 An ancient mosaic on the floor of a ruined Roman-era synagogue in Huqoq, Israel, is proving very mysterious. Dating to the fifth century AD, the work depicts a meeting between two high-ranking men—both of whom are unknown. It’s rare not to have mosaic figure labeled. Most believe the bearded figure in white is Jerusalem’s high priest. The identity of the other figure, a general, is more contentious.

The mysterious general may be Antiochus VII. Elephants in the scene evoke the Jewish Maccabean revolt against the Seleucid Empire in the second century BC. Descendants of Alexander’s generals, the Seleucids were famed for their battle elephants.

Others believe the general in the mosaic is none other than Alexander the Great. If so, this would be the first time a non-Biblical figure has been depicted in a synagogue mosaic. After Alexander’s death in 323 BC, it became fashionable to associate with his “greatness.” 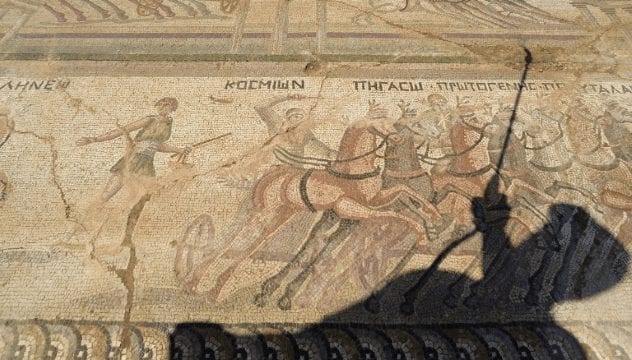 A rare mosaic depicting the chariot races at the hippodrome has been unearthed in Cyprus. The work has been dated to the first half of the fourth century AD and is 11 meters (36 ft) long and 4.2 meters (14 ft) high. It depicts four chariots, each drawn by four horses. The mosaic might contain a hidden political message; experts believe it might be a depiction of four factions that were competing for control of Rome at the time.

A farmer discovered the mosaic site in 1938, but excavations began decades later. The hippodrome was an incredibly significant location. The emperor used this open-air racetrack to show off his power. The mosaic was believed to be part of the villa of a Roman nobleman or wealthy citizen of Cyprus. It is exceptional not only for its content, but for its detail and state of preservation. 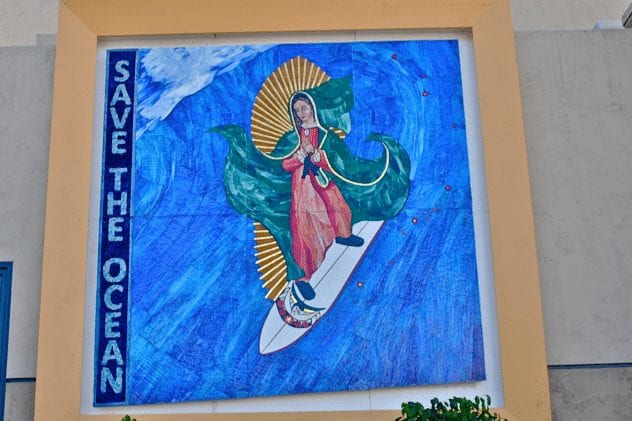 In 2011, a mysterious mosaic appeared in Encinitas, California, just before Easter weekend. The work depicts the Virgin of Guadalupe surfing. Disguised as construction workers, Mark Patterson and accomplice Bob Nichols secretly placed the work under a train bridge.

Technically, it was graffiti. However, the mosaic developed a mass following. Even city officials have fallen under the surfing Virgin’s spell and have invested thousands of dollars in figuring out the best way to preserve her. The mosaic was later moved to Encintias Boulevard.

Patterson and Nichols used the mosaic’s popularity to start the Surfing Madonna Ocean Project. Their goal—to keep the ocean clean and safe and to make sure anyone who wants to experience it can. Since 2013, the organization has donated $213,000 to surf camps for special needs children, beach cleanups, marine mammal rescue, and access for people with disabilities. In August 2016, the group announced it would donate a new mosaic for the city’s marine Safety Center.

1 Church Of The Nativity’s Hidden Mosaics 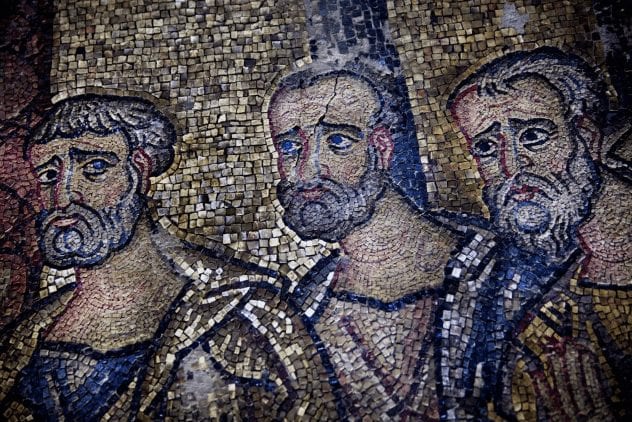 Photo credit: Nasser Nasser/AP via The Times of Israel

Bethlehem’s Church of the Nativity is supposedly built on the location of Jesus’s birth. This sacred site had been neglected for centuries until water damage spurred renovations. Centuries of grime were removed to reveal sparkling Crusader-era mosaics for the first time in decades. The state of disrepair had gotten so bad that many had forgotten the tile art existed. Also unearthed was a previously unknown icon composed of brass, silver, shells, and stones. Experts refuse to comment on the subject of the icon.

This was the biggest renovation of the church in 600 years. Two years and $8 million have been spent so far—and the results have been spectacular. There are plans to continue the project, including the removal of stone slabs to reveal ancient floor mosaics. There are many more mysteries to be unearthed in the Church of the Nativity.