Maps reflect our worldview—literally. Far from purely scientific instruments, they are almost always bound with history, mythology, and religion. A study of ancient maps reveals the shifting attitudes human have had toward themselves and their place in the universe. 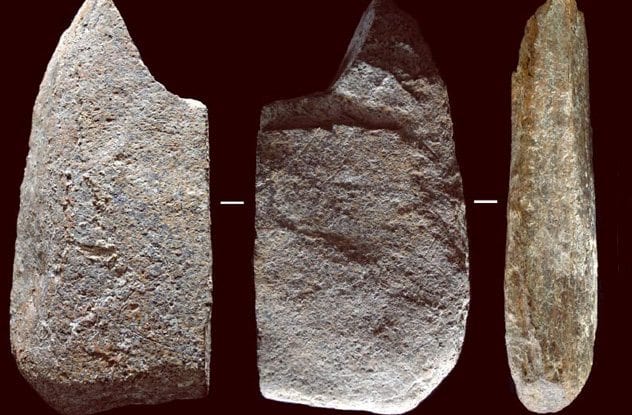 Archaeologists at Spain’s Moli del Salt site discovered what may be a 13,800-year-old map. The schist slab features seven semi-circular etchings, which experts believed to be huts. The shape coincides with modern hunter-gatherer dwellings of the Kalahari Bushmen and Aboriginals of the Australian Outback. The number seven reflects a typical population size. If true, this would be the earliest image of a human habitation ever discovered.

Anthropologists are thrilled by the idea that these huts are a spatial representation of social structure. All of the lines were carved with the same tool at the same time—suggesting one individual captured what was in front of him at one moment. 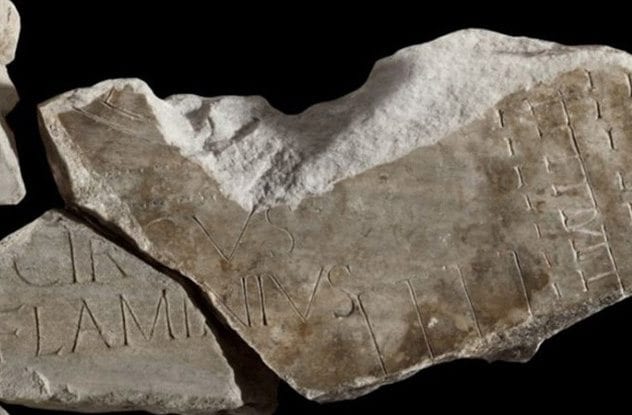 The world’s oldest and largest unsolved jigsaw puzzle is a 2,200-year-old map of Rome. Carved during the reign of SeptimIus Severus between 203 and 211, the Forma Urbis Romae originally hung of a wall in the Temple of Piece. It contained every building, temple, shop, bath, and staircase in ancient Rome. It is composed of 150 marble tiles built to a scale of 1 to 240. The Forma Urbis Romae was ripped down—most likely to be used to make lime cement.

Today, only 10 percent of the original map remains. The first pieces were rediscovered in 1562. A section recently discovered in Palazzo Maffei Marescotti allowed researchers to connect three chunks of the ancient puzzle. The newfound piece has shed new light on the present-day ghetto, an area which once dominated by the Circus Flaminius. 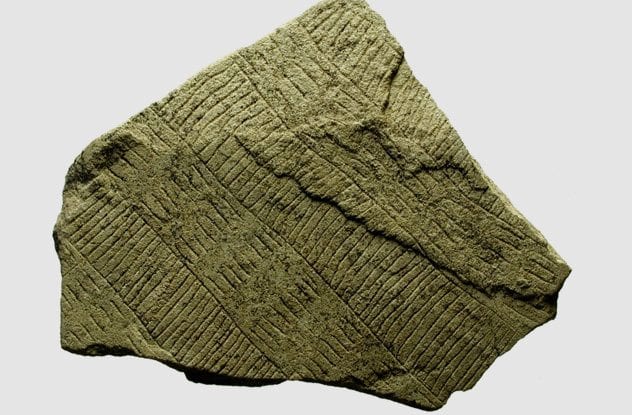 Archaeologists unearthed a set of what they believe are 5,000-year-old maps in Denmark. Covered with etchings of squares and lines, these 10 broken stones may be some of the oldest maps ever discovered. Researchers theorize that these symbolic representations of the terrain were used in Stone Age farmers’ fertility rituals. These “map stones” were discovered in an earthen wall enclosure on the Danish island of Bornholm.

Experts have connected these “solar stones” with the Neolithic sun-worshiping religion. These newfound map stones are different. Their squares and lines evoke geographic elements—both man-made and natural. Many believe that these are “stylized maps” rather than navigational charts in the current sense. 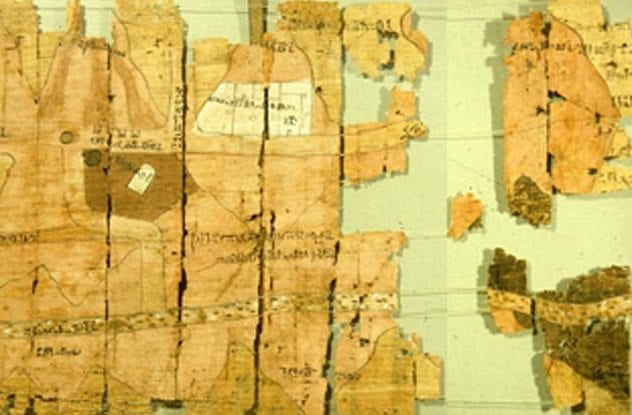 A 3,000-year-old papyrus contains a map to vast mineral wealth in Egypt’s desolate eastern desert. The Turin Papyus contains such detail of Wadi Hammamat valley that it is considered the world’s first geological map. Fragments of the work were discovered and slowly pieced together between 1814 and 1821. Initially believed to be three separate scrolls, the ancient map was found in a tomb in Deir-el-Medina. The most modern reconstruction of the map comes from the 1990s.

Experts date the scroll to the mid-12th century BC, around the reign of Ramsesses IV. Earlier maps have been discovered, but they are crude compared to the Turin Papyrus. The map contains no set scale but does contain text that acts like a modern map legend. It contains bekhen-stone quarries and gold mines The papyrus is so accurate that modern mineral hunters, like Aton Resources Inc. have relied on it to find fortune

6Star Map From A Distant Land 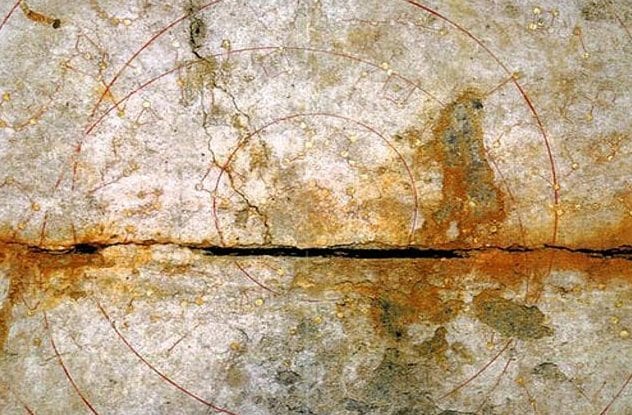 A star map carved into Japan’s Kitora Tomb may be the world’s oldest astronomic chart. 68 constellations with gold leaf stars cloaks the ceiling. Three circles track the movement of celestial bodies—including the Sun. The pole star dominates the center. The detailed map depicts the horizon, equator, and star courses. This is not the first depiction of the night sky. Lascaux Cave contains a 17,300-year-old image of the subject. However, it lacks astronomical observations.

Researchers noted that the sky depicted would have been observed hundreds of years before Kitora Tomb’s construction. However, estimates of the exact date vary between 120 BC and AD 520. Some believe that the knowledge came from Korea, despite depicting China. 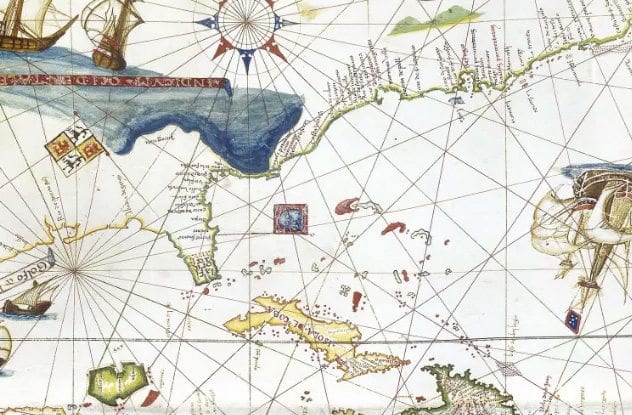 The first map of New York was drawn on goatskin and is now worth $10 million. Created by a Genoese cartographer Vesconte Maggiolo in 1531, the map is one of the first to show the eastern coast of America. It depicts New York harbor, which Henry Hudson would not explore beyond until 80 years later. The ancient chart even follows Magellan’s circumnavigation, making it a true world map.

6.7 feet wide and 3 feet tall, the map is made of nearly indestructible goatskin. For most of its existence, the chart remained rolled. As a result, the hues are still vivid. The only discoloration is that silver has become black. The map is filled with fantastic beasts like dragons and unicorns and is often very inaccurate. 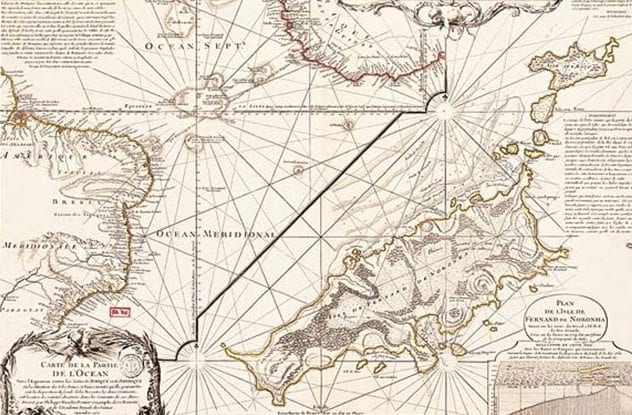 The Buache Map is a mysterious 18th-century chart that depicts Antarctica without ice. Many have used this as proof of ancient knowledge from a civilization that mapped Antarctica before it was cloaked with glaciers. Drawn by French cartographer Phillippe Buache de la Neuville in 1739, the work’s original title was “Map of Southern Lands Contained Between the Tropic of Cancer and the Antarctic Pole.”

Bauche popularized theoretical geography. This technique of deducing geography from explorers’ journals, astronomical observation, and scholarly research was considered defective in many instances. However, one assumption that proved correct was the existence of the Bering Strait. Another observation that was patently wrong was the existence of a sea in the middle of Antarctica. Some insist that the accuracy of the topography of Antarctica is proof of ancient, divine, or even alien mapping technology. Unfortunately, no one knows what the topography of sub-glacial Antarctica looks like. 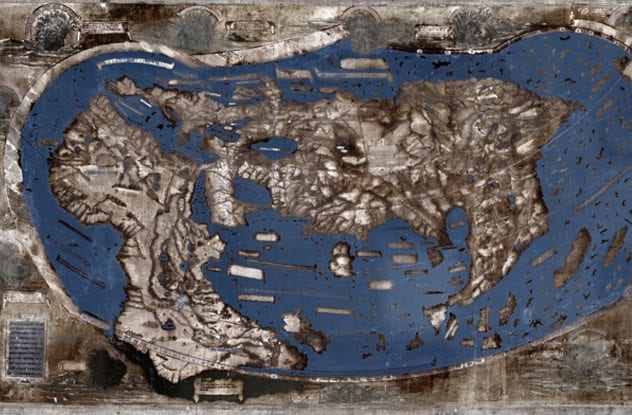 Christopher Columbus may have consulted a mysterious map from 1491 before setting sail across the Atlantic Ocean one year later. Made by Florence-based cartographer Henricus Martellus, the map synthesizes Claudius Ptolemy’s observations about the circumference of the world with Marco Polo’s observations and Portuguese Africa explorations. The map does not show the Americas. When Christopher Columbus arrived in the Bahamas he believed he had reached Japan, which is where Martellus’s map had him located.

Analysis revealed hidden messages on the map. The secret notes contain place names and 60 written passages. The 6-by-4-foot map was photographed under 12 light frequencies—including several beyond human visibility. Latin descriptions reveal facts about far-flung peoples like the “Balor” of Northern Asia who live without wine or wheat and subsist on deer meat. The detail of southern Africa is extremely accurate, suggesting it was derived from native sources rather than Europeans. 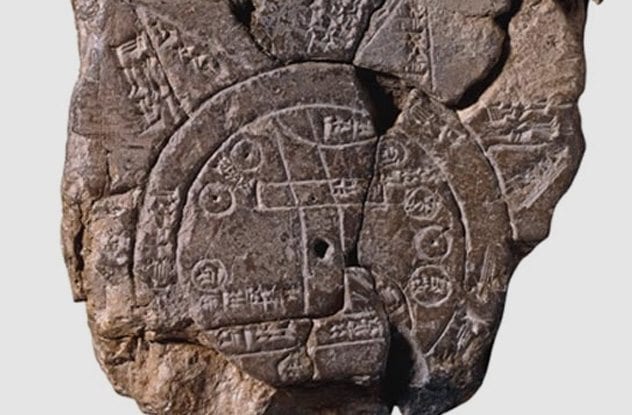 Archaeologists discovered the oldest undisputed map on the bottom of an unbaked clay tablet from the sixth century BC. Dated to the Neo-Babylonian period, the chart contains an inscription revealing that it is a copy of an even earlier work. The map was uncovered in 1899, at the site of Sippar located 30 kilometers southwest of Baghdad. Much more sophisticated and accurate maps were available in Greece centuries after this chart. The construction reflects an intentionally conservative blend of geography, cosmology, and mythology.

The map depicts the world as a disc surrounded by water. Seven mythical islands lie beyond and connect the earth to the heavens. Cuneiform text explains the mysterious beasts and heroes that inhabit these islands. Seven dots represent seven cities of the ancient world. A “Great Wall” symbolizes winter. The back of the tablet describes mythic beasts that inhabit the heavenly ocean. Experts believe these are constellations. 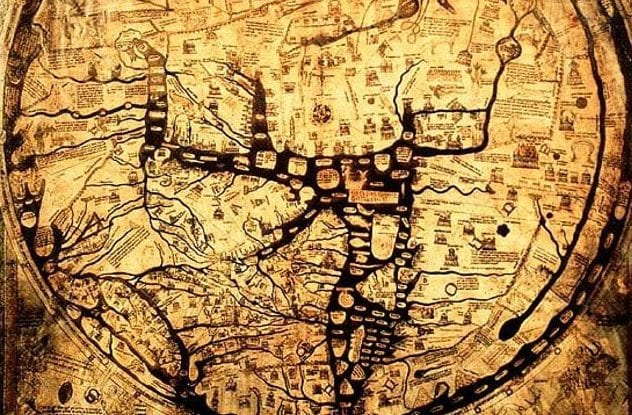 The Hereford Mappa Mundi lay hidden under a church floor for centuries. Dated to 1285, this is the largest medieval map. This grand chart of the world on calfskin is filled with observations of religion, history, and mythology. Because of its Christian origin, Jerusalem sits at the center of the circular map. In an archaic style, the east is oriented toward the top. The map contains a total of 420 cities and settlements, along with large bodies of water and important landmarks.

The map contains a supernatural world filled with bestiaries brimming with mythic monsters and curious cultures. The work was not intended for navigation but rather to serve as a compendium for knowledge. The map contains over 500 drawings of exotic animals and plants, biblical scenes, and classic myths. While the Mappa Mundi was made locally in Hereford, a copy has recently been brought to an international space station.