Most people consider the start of US history to be 1776, but nothing could be further from the truth. There are, in fact, thousands of years of North American history. Who lived there? What did they leave behind? This list explores these questions by taking a look at some of the most interesting and mysterious archaeological discoveries ever made in the United States. 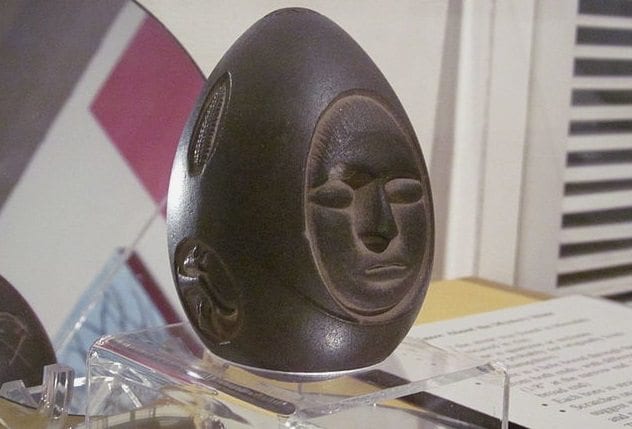 Discovered in 1872 buried close to Lake Winnipesaukee in New Hampshire, the eponymous mystery stone is dark, smooth, egg-shaped, and about 10 centimeters (4 in) tall and 6.4 centimeters (2.5 in) wide. On its surface are a number of carved symbols and images, including a face, ears of corn, and a teepee, among other unknown images.

Questions have emerged regarding the stone: Who made it? And what is it? One theory suggests that the stone may have been made by Native Americans to commemorate a peace treaty between two tribes. Other theories contend that the stone could be Celtic or Inuit in origin.

The mystery was further complicated when researchers investigated two holes in the stone, one at the top and one at the bottom. These holes were drilled with a level of precision that seems inconsistent with the ability of premodern tools. This has led some to believe that the stone may be an elaborate hoax, while it has convinced others that the stone may be a “thunderstone” crafted by supernatural forces. 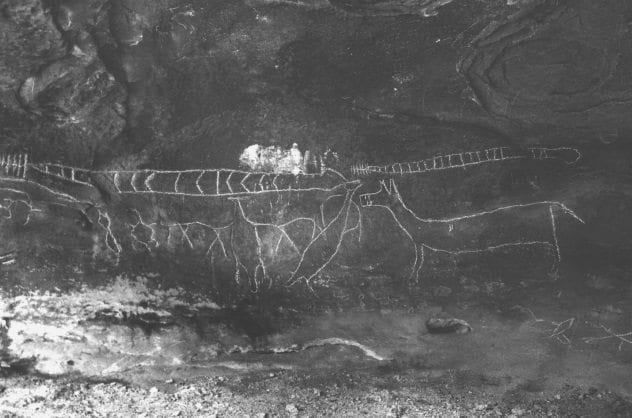 Photo via West Virginia Division of Culture and History

In Harrison County, West Virginia, a small cave was explored in the 19th century. Inside this cave are a number of incredible prehistoric petroglyphs. These petroglyphs portray a number of animals, including rattlesnakes and fish. Indian Cave is unique for its incredibly preserved state and has been described by archaeologists as “virtually unchanged.” Its petroglyphs are unique for their curious use of the color red, which can be seen on a number of the figures.

Archaeologists have determined the petroglyphs to be the work of early Native Americans but cannot identify which culture. Pottery found within the cave suggests that it was occupied sometime between AD 500 and 1675. Similar to other petroglyphs, the motivation for their creation is unclear. 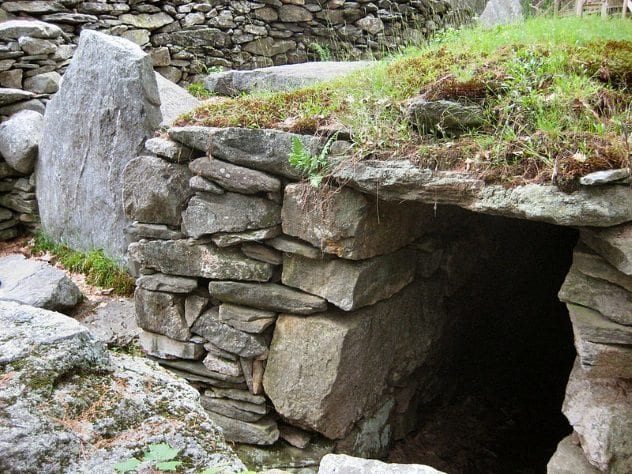 Outside of Salem, New Hampshire, lies the ruins of what some believe to be an ancient settlement. Known today as America’s Stonehenge, the site is made up of numerous man-made stone chambers, walls, and other rock structures.

The site has sparked a series of heated debates among historians and archaeologists as to the origins and use of the complex. The most prominent theory is that it was built by Native Americans some 2,500 years ago and was used for centuries as a place for religious ceremony. Another popular theory suggests that the structures were created and used by Irish monks around AD 1000. 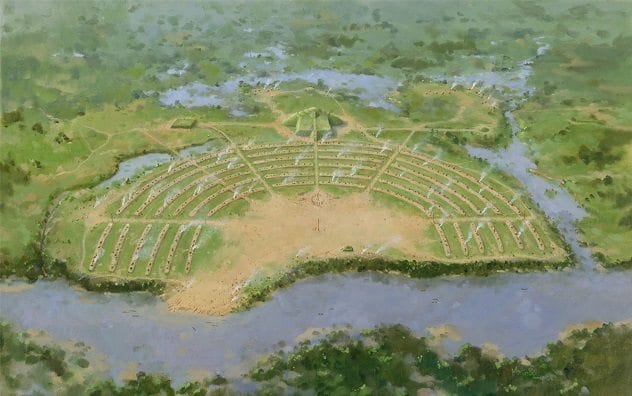 In Louisiana, there is an extensive complex of earthworks known as Poverty Point. The complex contains a series of mounds and ridges and was built by Native Americans sometime between 1700 and 1100 BC. What makes Poverty Point interesting is it’s the only known example of large construction done by a hunter-gatherer society.

No one knows exactly what purpose Poverty Point served. Some archaeologists suggest that the site was used for periodic ceremonial events, while others contend it was a permanent settlement. Similarly, we don’t know which culture built it, as there have been few artifacts found to link to any specific people. 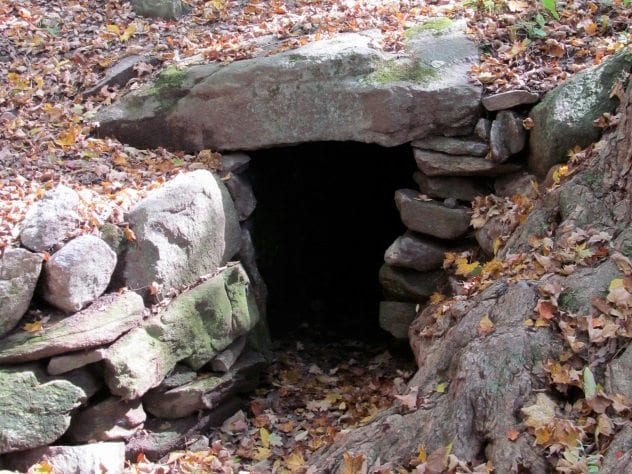 Throughout the New England countryside, there are hundreds of mysterious stone chambers and structures. There are various theories as to who built these structures, including everything from Native Americans and early settlers to Norsemen and Irish Monks. One of the most impressive of these man-made chambers can be found in Upton, Massachusetts. The Upton Chamber is built into a hill and has a long passageway that opens up into a beehive-like dome.

The chamber indicates a fundamental knowledge of stonework on the part of its builders and is also astronomically aligned. On the summer solstice, the entrance of the chamber aligns perfectly with the Sun, allowing the inner dome to be fully illuminated. This has led some experts to believe that the chamber was not built by any settler but could be the work of an ancient people.

According to some researchers, the chamber could be the work of Irish monks. These researchers claim that the beehive structure of the chamber as well as the stonework bare striking resemblances to structures found in Ireland dating back to the eighth century. 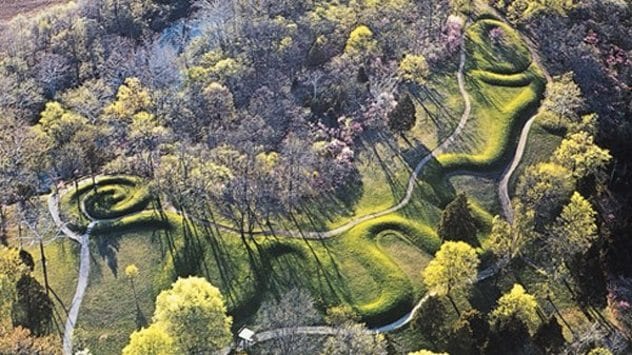 The Great Serpent Mound is an ancient earthwork discovered in Ohio. It’s an effigy mound, which is a mound in the form of an animal, in this case a giant snake. Archaeologists have been unable to figure out what culture built it, when it was built, or what its use was. Radiocarbon dating has suggested that the mound may have been built around AD 1000, while other studies have suggested it could be around 2,000 years old.

There are a number of theories as to what the effigy was used for. Some scholars believe it was used in religious ceremonies and possibly sacrificial offerings. Others believe it is some sort of calendar, due to its astrological alignments. 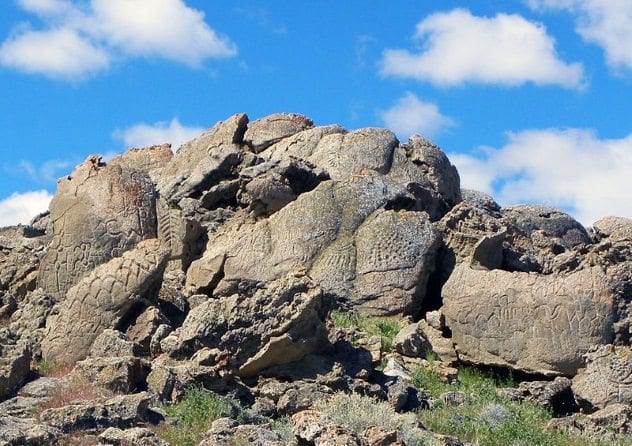 Near the dry Winnemucca Lake in Nevada, archaeologists believe they have discovered the oldest petroglyphs in North America. They’re located on a number of large boulders and vary in their design. Some of the boulders have circular designs, while others have diamond-like shapes. These petroglyphs are unique for a couple reasons: First, they’re much more numerous than other petroglyphs found across the country. Second, the markings are at least 10,000 years old.

Many questions remain as to the origin and meaning of the designs. They’re undoubtedly the work of early Native Americans, yet no one is quite sure as to who exactly these people were. Similarly, the reason for such artistic creation and what the glyphs themselves are supposed to mean, if anything, remains unknown. 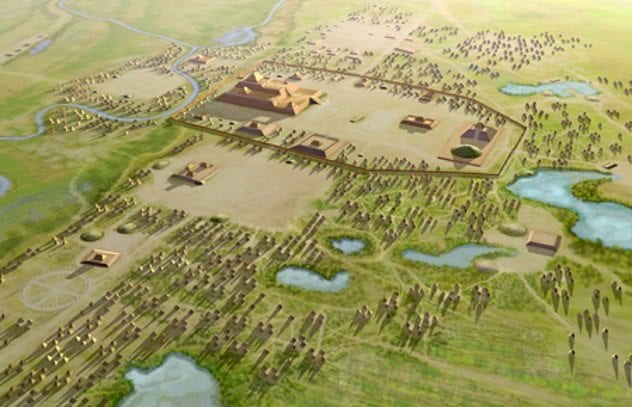 Cahokia was the largest city in pre-Columbian North America, with a population of around 15,000 people. Based in the fertile Mississippi Valley near where St. Louis is today, it lasted from about AD 700 to 1300. By all accounts, Cahokia was a complex urban society with a unique culture and a ruling class. They farmed, fought other tribes, and also apparently practiced human sacrifice.

Then, without a trace, they vanished. Historians have debated what happened but haven’t come to a consensus. It has been suggested that deforestation, climate change, disease, and fear of invasion may have been factors. 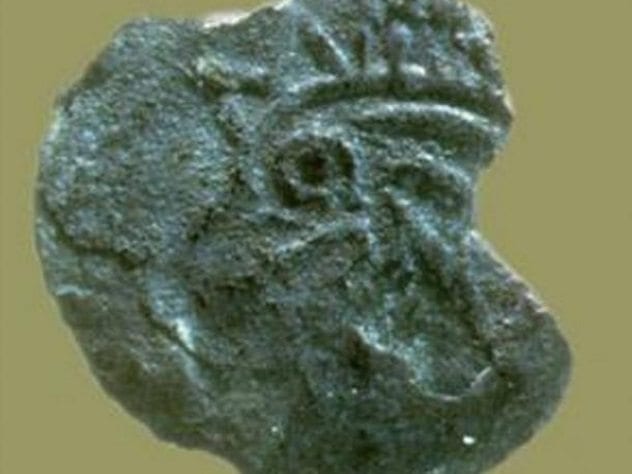 While excavating a Native American settlement in Maine in 1957, archaeologists found something amazing. Buried in the dirt was a small coin of unknown origins. The coin was first misidentified as a 12th-century British penny, but upon further inspection years later, English researchers declared the coin to be Norse. Experts at the University of Oslo stated that the coin was most likely minted between 1065 and 1080. It is the only pre-Columbian Norse artifact ever found in the US.

So how does a Norse coin almost 1,000 years old end up on the coast of Maine? Some are convinced that the coin is evidence of contact between early Norse settlements in Newfoundland and mainland Native Americans. If this is the case, it would change the entire time frame of first contact between the New World and the Old World. 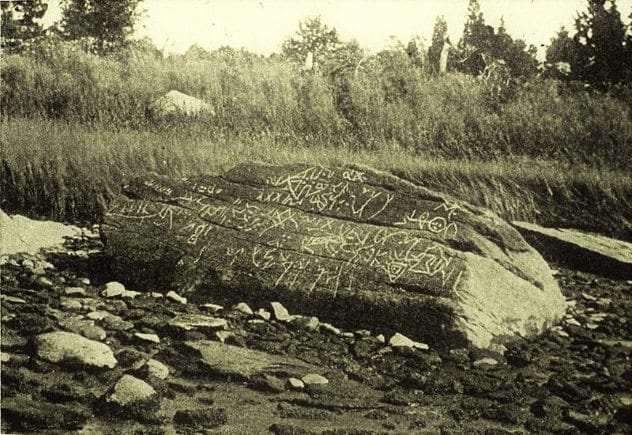 Dighton Rock is a 40-ton boulder that was discovered in the Taunton River of Berkley, Massachusetts, in 1690. It’s remarkable for its mysterious markings. The markings are seemingly inconsistent with any particular writing style, and the mysterious origins of the rock have baffled many. Throughout the years, a number of theories have been floated as to who the creators of the cryptic inscription may be.

One of the most popular theories is that the markings are Norse in origin. This theory suggests that the rock was a portrayal of a Viking voyage into the area as early as AD 1000. Another popular theory suggests that the markings are the work of Native Americans. There was a significant population of natives in the area where the rock was found, and similar markings have been found and attributed to various native tribes across the Northeast. Other theories suggest that ancient Phoenicians, the Portuguese, or the Chinese may be responsible for the markings.

Brad Sylvester is a student at Fordham University with interests in history, literature, music, politics, and writing. He can be reached at [email protected].