Any old discovery has the potential to patch holes in the archaeological record, but there are gaps that only the oldest or the first can fill. Then some of the most interesting pages in history get written, although not always complete chapters. The earliest discoveries of the archaeological kind always leave us a little wiser even if they tend to provoke more questions. 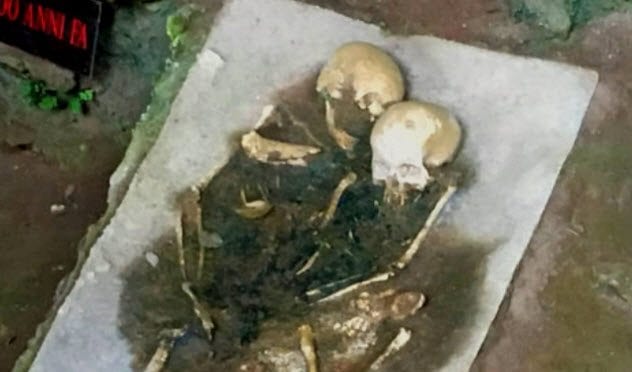 Italian researchers unearthed the remains of a Paleolithic boy who died just before his teenage years. They were delighted to discover a complete imprint of his brain against the inside of the skull. It was so detailed that scientists were able to digitally recreate the first Paleolithic brain in history.

Discovered in Calabria’s Grotta del Romito, a cave treasured for its rich Paleolithic history, the child is a valuable contribution to science. The groundbreaking reconstruction of the 17,000-year-old braincase is the first time that anthropologists, paleontologists, and neuroscientists can study an ancient human ancestor’s brain.

The researchers are hoping that the computerized gray matter will reveal more about how the hunter-gatherer boy lived. They are especially interested in the areas devoted to language, social interaction, and spatial coordination. 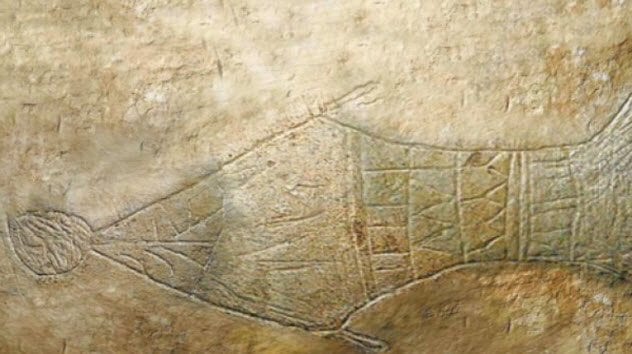 Near the famous “Jesus Tomb” of Jerusalem, there are stone coffins with unusual carvings. One might be “Yahweh,” and another is the word “MARA,” the feminine for “lord” or “master” in Aramaic. The most curious is a big fish holding a human figure in its mouth, similar to the biblical story of Jonah.

In early Christian materials and art, the Jonah story was symbolic of resurrection. To add to the theme, a rare Greek inscription describes someone raised up by God. The reason why this tomb is special stems from its construction date—somewhere before AD 70.

If the markings are genuine—and scholars believe that they are—then the markings are older than the gospels and would have been engraved a few decades after Jesus’s death. It also pushes back the record for the earliest archaeological proof of the Christian faith by several centuries. 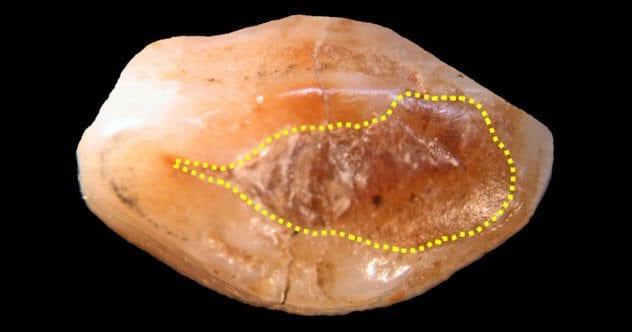 A special tooth languished for over a century before anyone realized its worth. Kept at a research center in Italy, the tooth was attached to the lower jaw of a man who had died 6,500 years ago.

His left canine had a fracture repaired with such finesse that scientists overlooked it for 101 years. The beeswax filling was finally noticed during a recent reexamination. Real evidence of ancient dentistry is scarce, which makes this tooth a valuable “rediscovery.”

The age of the wax was difficult to determine, but an estimate places the repair job shortly before or after the man’s death. If done prior to his demise, it was most likely done to lessen the pain. That would make it the most ancient therapeutic dental filling ever found as well as the oldest evidence of prehistoric dentistry in Europe. So far, it appears to be a unique case. 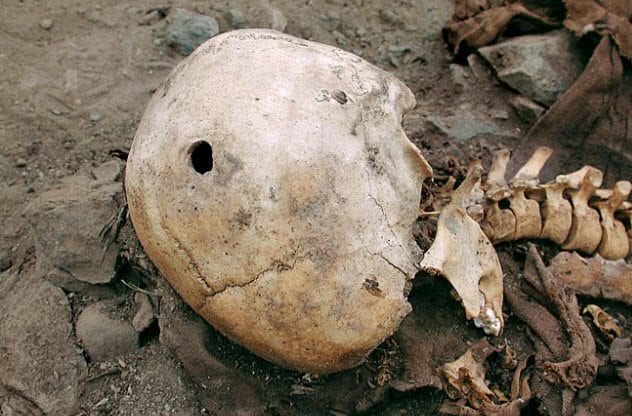 During an archaeological dig in Peru, 72 bodies were found in shallow graves. One skull’s damage resembled a bullet’s entrance and exit wounds. Archaeologists first thought it was the work of a modern-day shooter taking potshots in the area. But the fragile remains would have shattered.

The skeletons belonged to a group of Incas who succumbed almost 500 years ago when the Spanish (who had muskets) wreaked havoc on the native populations. Forensic experts studied the bone trauma under a powerful electronic microscope. The results were undeniable: Metal fragments of a musket ball were found around the hole.

This Inca is the first gunshot victim in the Western Hemisphere, and he was shot from behind. But he died a quick and less horrifying death than his companions. Most were torn apart, mutilated, or impaled. Later, two more possible gunshot victims were identified from the same burial site. 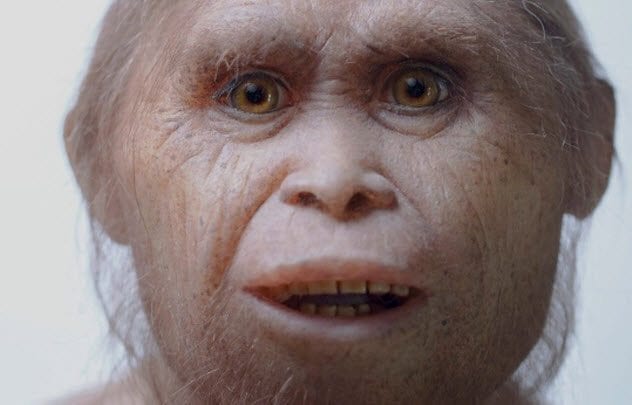 Ever since the child-sized “hobbit” (pictured above) was discovered in Indonesia, Homo floresiensis couldn’t be linked to any other hominin. Then incredibly, a new species was discovered a mere 70 kilometers (45 mi) from the hobbit’s original location.

Although the latest find was 700,000 years older (the hobbit died 70,000 years ago), they share similarities. Both were pygmy-sized men and used nearly identical stone tools. It is the first discovery that throws serious light on Homo floresiensis.

The new guy could be their elusive ancestor, one with teeth very similar to the human-sized Java Man. The latter arrived in the area about 1.5 million years ago. The theory is that some of these hominins were stranded on the island of Flores and followed the Island Rule in which a species shrinks to survive.

They eventually became the hobbit’s ancestor and then Homo floresiensis. The Island Rule was indeed a thing on Flores because it once contained pygmy elephants. 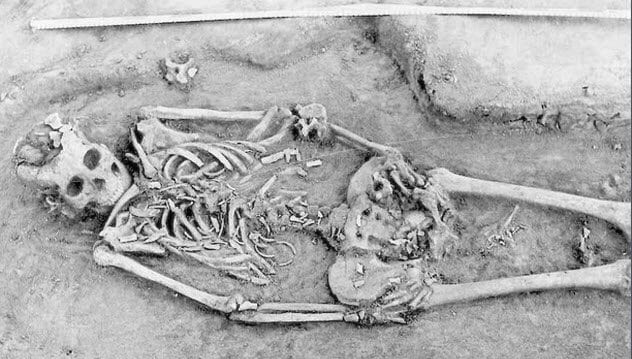 A tragic scene presented itself when a grave was opened in Siberia. Inside was a woman, but her nearly 8,000-year-old skeleton wasn’t alone. Duplicate sets of tiny bones revealed that she had been buried with one child still in the womb and another partially delivered.

The morbid find is possibly the oldest example of death during childbirth and also the earliest twins ever found. The woman was part of a hunter-gatherer community and approximately 20–25 years old.

When researchers analyzed the position of the fetal bones, they put together a deadly scenario that any prehistoric person had little chance of surviving. As far as they could tell, she was trying to deliver a breech baby who was perhaps tangled with its twin, making birth impossible. In modern times, this type of delivery can still endanger the life of a mother and her babies even with the option of undergoing a C-section. 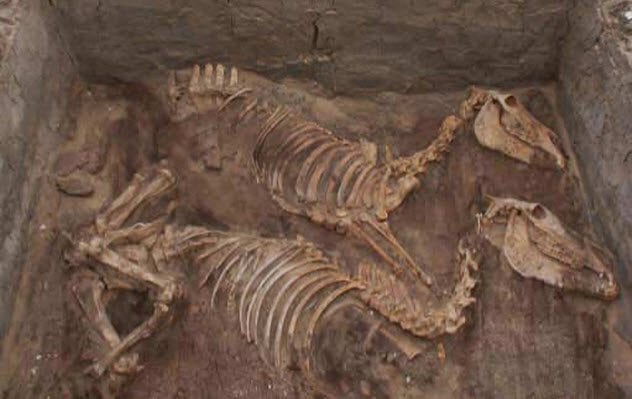 From the tombs of Egypt comes another first—the taming of the wild ass. It doesn’t sound like much, but this could be the factor that united Upper and Lower Egypt.

In 2003, paleoscientists excavated a burial complex at Abydos. It belonged to one of the first pharaohs and, surprisingly, also contained graves filled with donkeys. Before this, no real evidence existed as to when and where donkeys became beasts of burden.

The 10 skeletons, their joints in particular, showed damage consistent with carrying heavy loads. In some places, the cartilage was completely worn away. Behind the shoulders, where loads are normally placed, the vertebrae were arthritic.

The 5,000-year-old donkeys are most likely associated with King Narmer, who merged the two Egypts. Establishing trade routes with pack animals would have been invaluable to the union, and perhaps that is why the donkeys were included in the royal tomb. 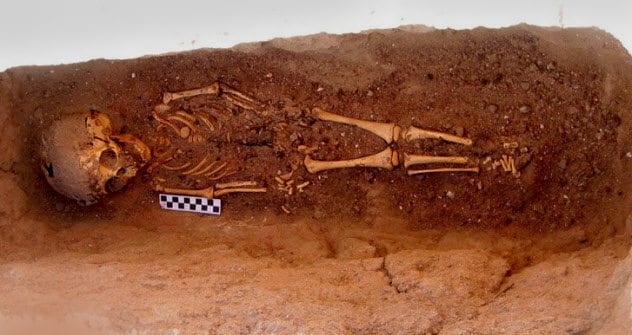 It is difficult to diagnose mistreatment from old remains. As a result, confirmed cases of ancient child abuse remain uncommon. However, a grave in Egypt contained the body of a two- to three-year-old child with injuries too brutal to miss.

Known as “Burial 519,” fractures marred the collarbone, one forearm, ribs, pelvis, and back. The different stages of healing are suggestive of repeated violence. Both upper arms were also broken at the same place, which is consistent with a powerful adult grabbing and shaking the child with immense force.

Other children buried in the cemetery showed nothing resembling Burial 519’s sorry state, an indication that such ill-treatment wasn’t widespread in the community. Researchers couldn’t determine why the 2,000-year-old toddler ultimately died, although it’s possible that the last injury (the collarbone fracture) was part of the fatal event. It is the oldest child abuse case and the first from Egypt. 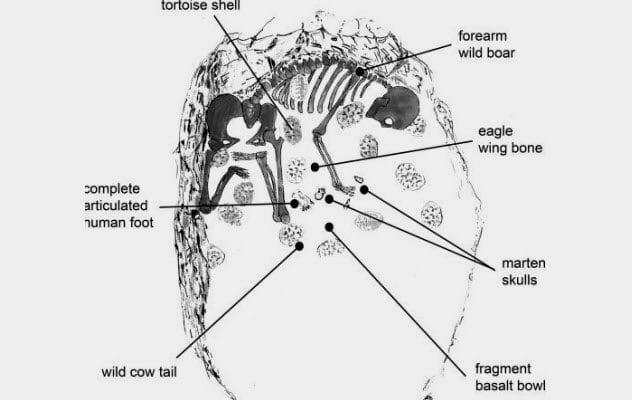 Another cemetery, this time in Israel, once belonged to the Natufian culture. One of the 28 people buried there could be the earliest known female shaman. When she passed away 12,000 years ago, she was treated to a unique funeral.

The site is encircled by a stone wall, a feature found nowhere else in the graveyard. The 45-year-old woman’s body was pinned beneath 10 large stones, and a menagerie of body parts lined the pit—50 tortoise shells, a human foot, tail vertebrae from an extinct auroch, two stone marten skulls, a golden eagle’s wing, a wild boar’s leg, and a leopard’s pelvis.

Their inclusion supports the belief that she was a shaman. Throughout history, healers have used animal spirits for rituals and guidance. The strange bone collection could be a reflection of her station in life and death. The purpose of the human foot is anybody’s guess. 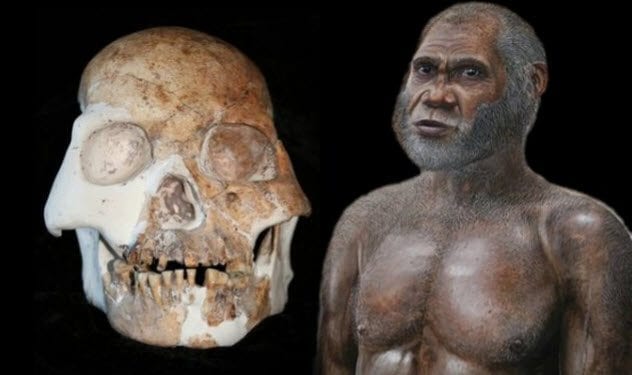 A mysterious and extinct people from southwest China could change the belief that prehistoric hominids died out soon after modern humans arrived on Mainland Eurasia. In 1989, their fossils were recovered from Maludong (“Red Deer Cave”) and were only 14,000 years old.

By then, all premodern human species were thought to have disappeared. Yet the humanlike bones were distinctly not Homo sapien. Instead, they resembled African ancestors who lived 1.5 million years ago.

One thighbone in particular showed 15 traits of a more primitive anatomy and that the person walked somewhat knock-kneed. The bones presented researchers with a never-before-seen human that was an odd mix of modern and primitive.

The scientific community remains divided on whom the Red Deer people were. However, most agree that they make a good case that prehistoric and modern humans lived side by side for a massive 60,000 years.