As the drumbeat of the 2016 presidential campaign slowly fades and the dust settles on Donald Trump’s victory, many in the press are reflecting on one of the craziest elections in US history. But there’s at least one election that could out-crazy it on all levels: 1876.

A face-off between Republican Rutherford B. Hayes and Democrat Samuel J. Tilden, the election of 1876 redefined the term “controversial.” So ugly that it nearly sparked a second civil war, the campaign season was brutal, impassioned, and often utterly ridiculous. 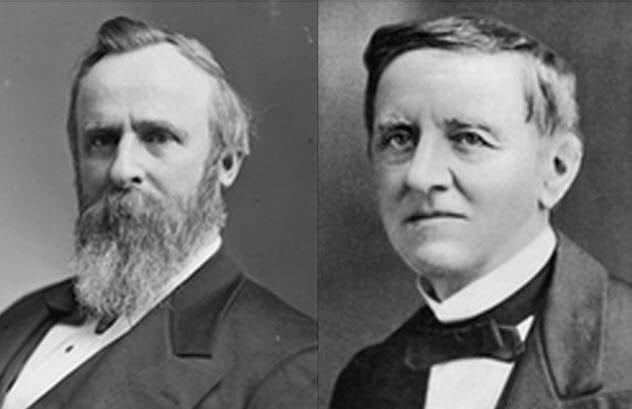 Elections are usually pretty simple: The person with the most votes wins. That wasn’t the case in 1876. Once all the votes had been counted and the electoral college votes doled out, both parties took one look at the results . . . and promptly held victory parties.

Democrat Tilden had won almost a quarter of a million more votes than Hayes, along with 19 more Electoral College votes. However, Tilden was still one electoral vote short of the 185 needed to become president. His team thought this wouldn’t be an issue. Their guy had clearly won. They weren’t counting on the machinations of Hayes’s team.

Hayes’s advisers realized that Tilden’s missing vote meant that he couldn’t technically call himself president. So they, too, declared victory. Suddenly, the US had two presidents-elect, neither of whom thought the other legitimate. It would take all sorts of crazy deals before one emerged victorious. 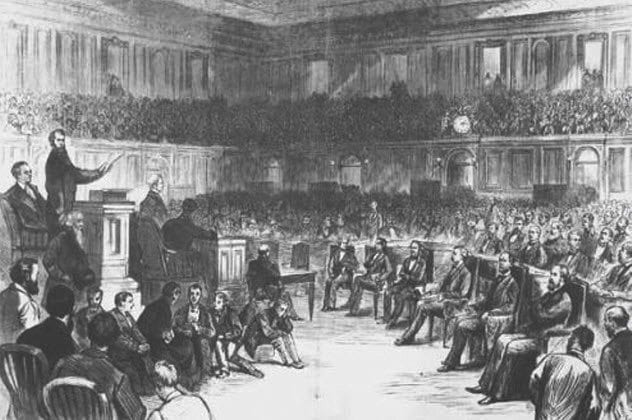 Florida is an important state in any election, but 1876 was something else. That year, Florida came close to sending the whole country spiraling into a second civil war when its representatives refused to disclose whether the Democrats or Republicans had won.

The problem was that Florida’s elite didn’t know themselves. The state had originally gone Tilden, but an investigation found that ballot boxes had been stuffed with so many Democratic votes that only mass voter fraud could account for it.

Nonetheless, the state’s Democrats insisted they’d won. The state’s Republicans insisted that the Democrats hadn’t. Florida’s electors were left with no idea what to report to Washington.

Amazingly, Florida wasn’t the only state forced into silence. Louisiana and South Carolina also had problems determining a winner. As a result, 20 electoral votes were left up for grabs. By sheer luck, that was the exact number Hayes needed to overtake Tilden.

In 1876, Colorado was worth only three electoral votes—not much of a prize to argue over. But the two parties didn’t even get the chance. Rather than letting its voters decide who should be president, the Centennial State ordered its electors to give all three votes to Hayes.

Colorado had just joined the Union that summer. If it had waited until December 1, Tilden would have already had the electoral votes needed to become president. Alternatively, if the state’s citizens had voted and awarded a single elector to Tilden, he would have become president.

The only reason Hayes hatched his insane plan to hoover up Florida, South Carolina, and Louisiana’s 20 votes is because his three from Colorado left him within striking distance of Tilden. It wasn’t the only state that would screw around with the process that election. 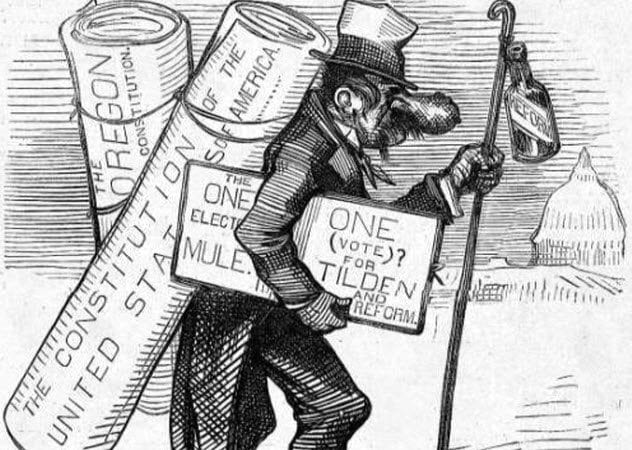 Hayes had won Oregon’s vote, so the state’s three electors were bound to vote for him. Then the Democrats discovered that one of Oregon’s electors, John Watts, was a former postmaster. As a federal employee, he was ineligible for the post of elector. So they replaced him with a Democrat, who threw Watts’s pro-Hayes vote to Tilden.

This wasn’t illegal, but it was deeply unethical. The Democrats had just magicked a spare vote for Tilden out of a state that had overwhelmingly voted Republican. So the Republicans refused to recognize the new elector.

Instead, they nominated their own dude, who gave the vote back to Hayes. So both parties were now working with different totals from Oregon, making things even more confusing.

6 Everyone In South Carolina Started Killing Each Other 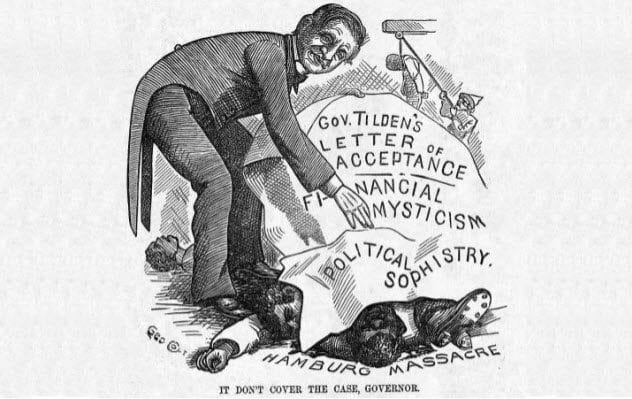 It’s often said that the US has a history of nonviolent transitions of power. They should change that to read “the US, except for South Carolina.” While other states were ballot stuffing or messing with electors, South Carolina’s residents decided to just kill their opponents and claim victory that way.

The violence unfolded along racial lines. Gangs of minutemen and KKK-inspired vigilantes tooled up and rode into black neighborhoods to shoot, beat, and whip freedmen. Meanwhile, black freedmen got hold of any guns they could and fought back, resulting in white deaths. In places like Ellenton, a Klan rampage led to 13–30 black men getting killed.

Most notorious of all was the Hamburg massacre. After an argument over access to a road spiraled out of control, 200 armed white men chased 40 African Americans into a stone warehouse. Then they blew the warehouse apart with a cannon.

5 The Republican Candidate Refused To Vote For Himself 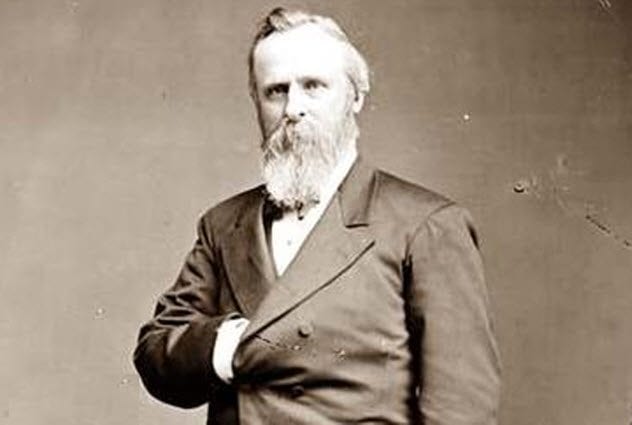 A deeply moral man sporting magnificent facial hair, Rutherford B. Hayes was also extremely modest. So modest, in fact, that he point-blank refused to vote for himself. Even by the standards of the time, this was eccentric.

However, Hayes’s opponent, Tilden, was equally ill-suited to the rigors of campaigning. Tilden refused to go out and campaign for himself, preferring to stay in his mansion. When Republicans accused him of corruption, Tilden declined to refute the charges, saying it would be undignified to do so.

At times, the two seemed to be competing to not become president. Hayes took a vow of silence and wouldn’t comment on his candidacy even when asked. Republicans later said his absolute commitment to noncommitment nearly cost them the election.

4 Both Parties Set Up Rival Governments 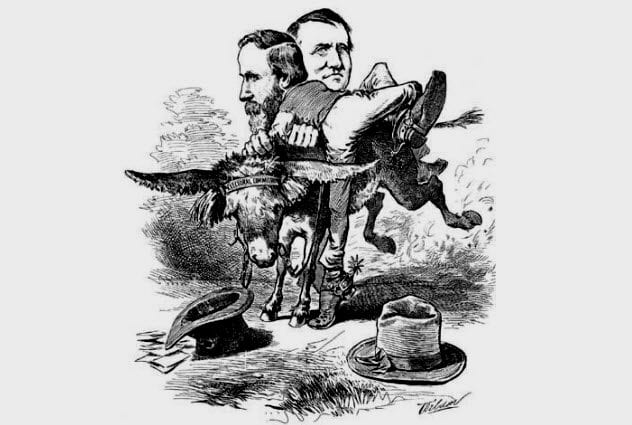 Remember the mystery of who won Florida, South Carolina, and Louisiana? By December, it was clear that the three states needed to hurry up and inaugurate governors before the instability crashed their economies. But the Democrats and Republicans were both still claiming victory.

So they came up with the least workable solution ever. In Louisiana and South Carolina, both parties set up rival local governments, set about passing laws, and tried to rule two states at the same time.

While things seemed to hold together locally, pandemonium erupted in Washington. There was talk of another civil war. One newspaper editor from Louisville tried to organize 100,000 armed men to march on Washington. Clearly, something needed to be done. 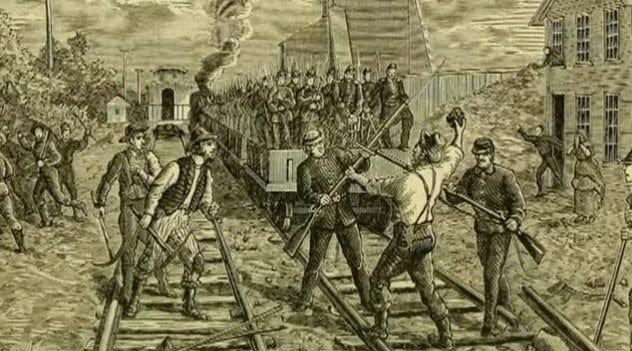 The funding for the US military depends on a supportive Congress. But the Democrat-controlled Congress of 1877 was about as far from supportive as you could get. As the disagreement over the election rumbled on, Democrats began to worry that Republicans would use the army to reoccupy the South.

Their simple solution? Bankrupt the army.

The 54th Congress engineered a situation where a funding motion for the army couldn’t pass. As a result, every enlisted man in the US suddenly saw his funding dry up. Officers and ordinary soldiers alike were unable to withdraw a single dime in pay. The Union Army had been neutered.

Amusingly, this attack on the army didn’t take effect until three months after the Compromise of 1877 saw Hayes sworn in as president. By that time, Texas was under attack from Apaches and desperately wanted the army to help. The Southerners’ plan hurt no one but themselves. 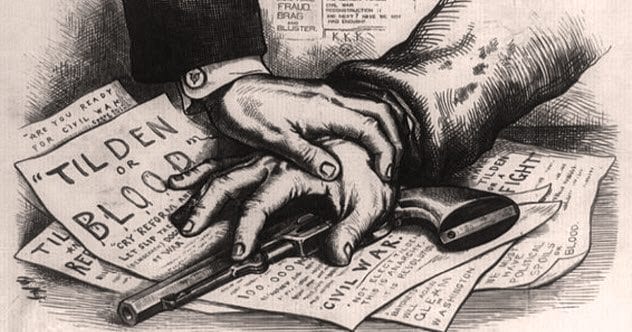 The timing of the 1876 election couldn’t have been worse. The country was barely a decade out of the bruising Civil War that had killed well over half a million men. Many believed that violence was still the answer. So when Republicans started saying Tilden hadn’t won, Southerners prepared for another civil war.

Armed “Tilden militia groups” formed. The Midwest Minutemen announced that they would march on the capital and kill anyone who stopped Tilden from entering the White House. Newspapers clamored for war. President Grant was so spooked that he declared martial law in some regions and boosted the military presence in Washington.

For the fact that it didn’t spiral into war, you can thank Tilden himself. Just as the Democratic nominee thought it was undignified to answer charges of corruption, he thought it was unsportsmanlike to threaten civil war. The would-be rebellion fizzled out.

1 The Republicans Rigged The Supreme Court To Win 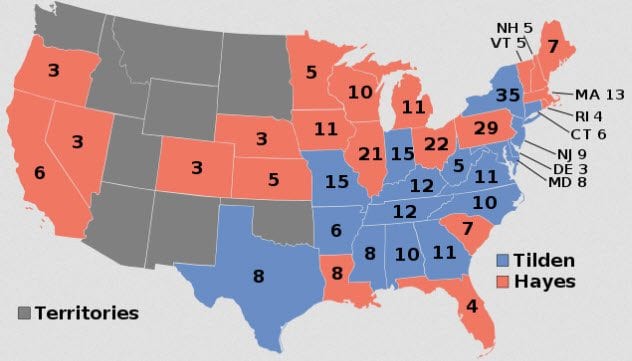 Eventually, it was decided that the only way to solve the disputed election was to set up an electoral commission. The makeup would be seven Democrats, seven Republicans, and one Independent. That way, no one could complain.

At least, that was the plan. In reality, the Republicans rigged the commission to give themselves the deciding vote.

First, they tried to bribe David Davis, the Independent justice, by giving him a senate seat in Illinois. Davis torpedoed their plans by refusing to serve on the election commission. So the Republicans appealed to four Supreme Court Justices to replace him. All four were Republicans. All four selected another Republican, Joseph P. Bradley.

Bradley voted with the Republicans on every issue, giving them the controlling vote. As a result, Hayes was awarded Florida, South Carolina, and Louisiana’s electoral votes, handing him the presidency. The craziest election in US history was officially over.