Mummies fascinate and terrify, challenging our basic understanding of death and decay. There seems to be something “unnatural” about remains that refuse to rot. Given their state of preservation, mummies are treasure troves for people in search of the past. However, they also serve as powerful memento mori—reminding us that we, too, will one day be among their ranks. 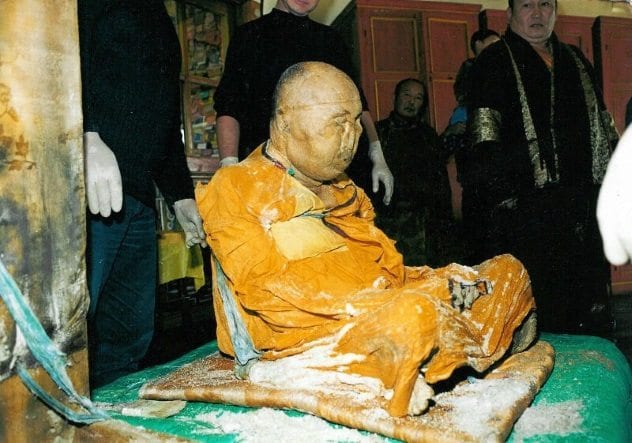 In 2015, the mummified corpse of Buddhist lama Dashi-Dorzho Itigilov was discovered in Mongolia’s Songinokhairkhan province. The 90-year-old remains were found in the depths of a monastery, seated in lotus position and wrapped in calfskin. Born in 1842, Lama Dashi-Dorzho was a monk of the Tibetan Buddhist school.

In 1927, Dashi-Dorzho, age 75, gathered his students and announced that he was preparing to die. He advised his acolytes to look upon his body in 30 years. He entered the lotus position, began to chant a prayer for the dead, and passed away. Exhumed 30 years later, his body was still in the lotus position and nearly completely intact. He was reburied in a secret grave for protection against Stalinist forces. Amgalan Dabayev, age 88, had been at the first exhumation and led researchers to the lama’s unmarked grave. The body is currently on display in Ivolginsk monastery. 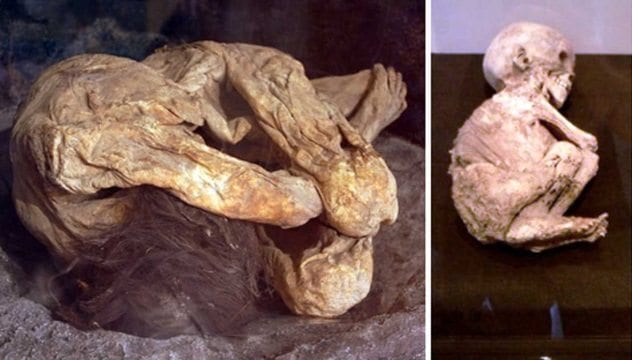 In 1980, a housewife discovered the mummified remains of a young girl and an infant while cleaning out her garage in Lemon Grove, California. The woman immediately alerted authorities. Initially conducting a murder investigation, police soon discovered that the woman and the infant died centuries ago.

The house was previously inhabited by two teens, who became obsessed with mummies. They learned that tribes of Northern Mexico often left their dead in caves, where the cool, dry air would naturally mummify the corpses. The teens spent a month in Chihuahua exploring caves. They found the two mummies but couldn’t reveal them to archaeologists without admitting to having committed a crime. They decided to smuggle the mummies back to California. The teens were drafted into Vietnam and had a friend watch over the box containing the remains for over a decade before they were discovered. 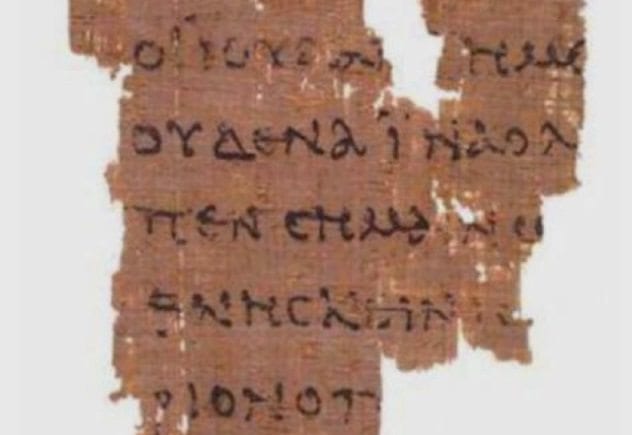 Researchers believe that they have discovered the oldest-known gospel text in the mask of a mummy. The papyrus scrap contains what may be a section of The Gospel of Mark, dating to before AD 90. If that date is correct, the scrap would be decades older than the previous oldest-known gospel. The date was determined using carbon analysis, handwriting investigation, and comparison to other dated documents.

The discovery was made utilizing a technique that allows glue to be removed from papyrus, while keeping any writing intact. The technique remains controversial, as it can permanently damage mummy masks. Pharaohs were buried with elaborate masks of gold. However, ordinary folk made due with masks of papyrus, linen, glue, and paint. Papyrus was expensive during the period, and more often than not, it needed to be reused. Researchers have discovered Greek texts, business documents, and even personal correspondence inside mummy masks. 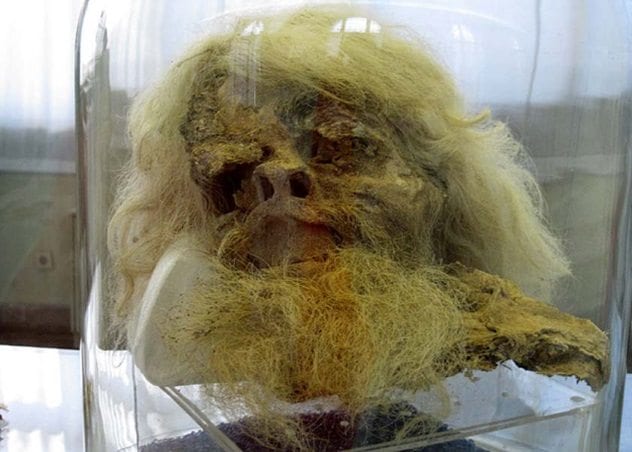 A functioning salt mine in Northwestern Iran has produced six naturally preserved mummies. Chehrabad Salt Mine’s “salt men” range in date from 539 BC to AD 640. Their beards, hair, and even clothing are often nearly perfectly preserved. In some cases, stomachs, colons, and last meals are intact.

The most recent discovery was made in 2007. Experts have identified this mummy as a Roman-era miner killed by falling rocks or an earthquake. The first five salt men discovered were given to scientists for research. However, the newly discovered mummy will remain underground. There is concern about the Iranian government’s lack of equipment and facilities to help preserve the salt man.

A Stanford folklorist believes the salt men might be connected with satyr legends. Their protruding jaws, snub noses, and hair bear uncanny resemblance to depictions of satyrs in ancient accounts, including St. Jerome’s tale of a satyr head on display in Antioch. 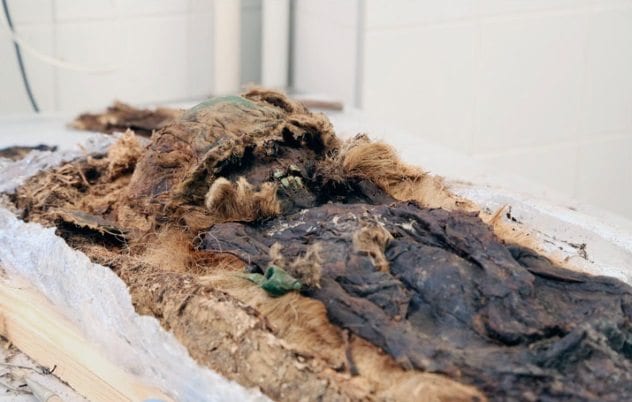 In 2015, archaeologists unearthed a child mummy from the Zeleny Yar necropolis in Northern Siberia. Dated to the 13th century, the remains belong to a boy between six and seven years old. His body was cocooned in birch bark and copper. The permafrost and metal naturally preserved his remains. Buried with a bronze axe, the boy appears to have been of a higher social status than other remains discovered at the site.

Tissue samples were taken of his internal organs, which remain intact. Experts believe they will be able to extract viable genetic material from the boy. They have already started to collect DNA from native Siberian populations in an attempt to discover the boy’s modern relatives. South Korean scientists are working to create a facial recreation. Given the excellent state of preservation, they believe it will be a success.

5 Secret Of The Statue 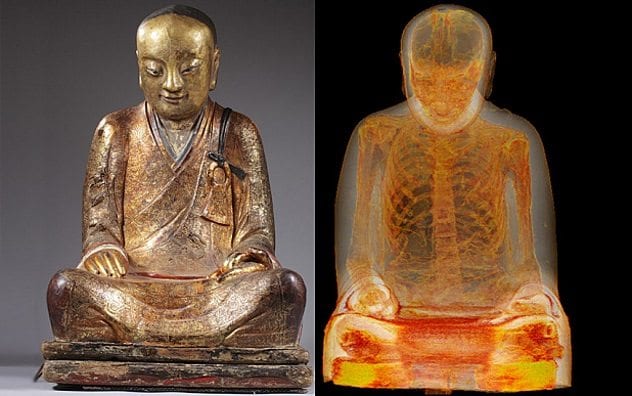 A Dutch art collector discovered a 1,000-year-old mummified monk hidden inside a Buddha statue that he purchased from China. The corpse was too fragile to be removed. Experts believe the mummy was displayed in the open for 200 years before it was encased in the statue during the 14th century. In 2014, CT scans revealed that the monk’s organs were missing. The hollow cavities were filled with thousands of paper scraps cloaked in Chinese characters. They found he was seated on a cloth covered in inscriptions, which indicate he was a Buddhist monk named Liuquan.

Experts believe Liuquan may have performed self-mummification. The practice requires a special diet and a toxic tea, which will make the body too poisonous to be consumed by maggots and bacteria. The ancient process is known in Thailand, China, and Japan. Few were able to endure it, and those who could were revered. 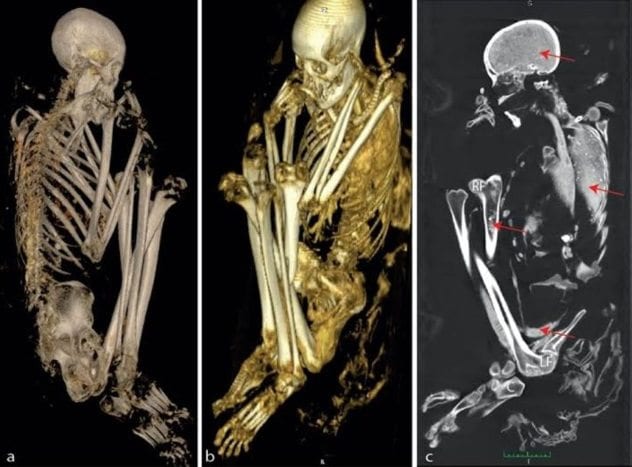 Photo credit: South African Journal of Science via The Conversation

In 2008, a game lodge patrol stumbled upon the first mummy ever discovered in Botswana. Dubbed the Tuli Mummy, the over-200-year-old remains were wrapped in calfskin. At first, the patrol officer thought he had come across a poacher’s kill but quickly realized otherwise. The dry conditions naturally preserved the body. Mummification was not a common practice in Southern Africa.

A CT scan revealed that the Tuli mummy was over 50 at the time of his death and also suffered from a degenerative spinal condition. The scans were unable to find any internal organs, meaning they completely dried or were removed after death. Most think removal is unlikely, given the lack of mummification traditions in the region. Researchers were able to extract DNA from the Tuli mummy. Analysis revealed that he is related to modern Khoesan and Sotho-Tswana populations. 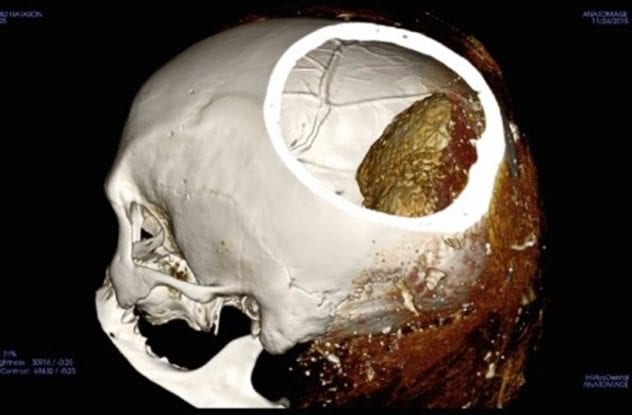 Researchers recently discovered that the skull of a 3,200-year-old Egyptian mummy is filled with dirt. CT scans revealed sediment filling the cavity, which still contained the brain. Researchers had never seen a dirt-filled mummy head before. The presence of the brain means the mummy probably came from the New Kingdom, between the 16th and 11th centuries BC. After this period, brain removal became standard. The dirt in the skull may reflect an experimenting embalmer and suggests flux in mummification techniques.

Named Hatason, the mummy was shipped from Egypt to San Francisco in the late 1800s. It is now on display at the Legion of Honor Museum. Her coffin and clothing indicate she was a commoner. There were no amulets in her coffin, and her bones were jumbled inside wrappings shaped into a body. Gender is usually determined through the pelvis, but Hatason’s was crushed. Researchers believe her skull looks female. 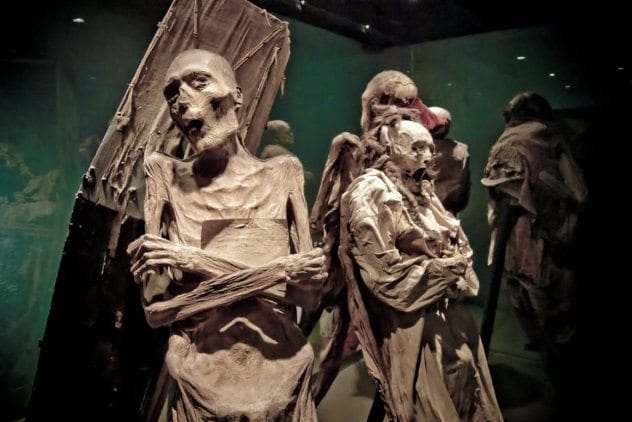 Guanajuato, Mexico, enforced a strict grave tax between 1865 and 1958. If relatives failed to pay, their loved ones were “evicted.” Due to local conditions, the exhumed corpses were often naturally mummified. These remains were housed in an ossuary. It quickly became chock full of mummies and rebranded itself as a museum in 1894. The collection contains many gruesome-looking specimens, including a pregnant mummy and the world’s smallest mummy.

Ignacia Aguilar may be the most intriguing of the Guanajuato mummies. During the midst of a cholera outbreak, a nonthreatening heart condition caused her to be incorrectly pronounced dead. Her family quickly buried her—alive. Years later, when the body was exhumed, they discovered her face-down in her coffin, covered in scratch marks, with a mouth full of blood from gnawing on her arm. Her remains, complete with mouth frozen in scream, are still on display at the museum. 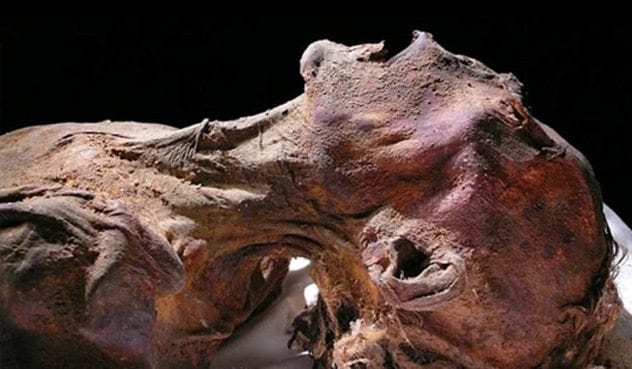 In 1881, archaeologists discovered a mysterious mummy in a royal grave cavern south of Cairo. When the body was unwrapped in 1886, researchers discovered the man’s face frozen in a scream. With no identifying marks on his sarcophagus, the mummy was initially labeled “Unknown Man E” before he was given the more apt name of “the screaming mummy.”

Some believe the screaming mummy was an official who served in the far reaches of Egypt’s empire and was embalmed by novices. This might account for the presence of quicklime as well as the goat and sheepskins covering the body. According to Egyptian tradition, goats and sheep were unclean animals, and their presence in a grave would render the deceased incapable of reaching the afterlife. However, they were common in foreign graves. Others suggest he was a foreign prince or disgraced royalty—possibly even Prince Pentewere, who was accused of plotting to kill his father, Ramses III.