From out of the Civil War, there came a group of angry, Confederate men. One source claimed that the men banded together for the sole purpose of scaring newly freed African Americans. Another source said that the men came together to fight off the Northern carpetbaggers and the bands of thieves that roamed the countryside.

While their intentions may have been about self-preservation in the beginning, their outward hatred toward anyone in the US who was not like them corrupted them into what they have become today—a hate group bent on destroying the freedoms and liberties of the American people.

10 The Klan Begins To Flourish 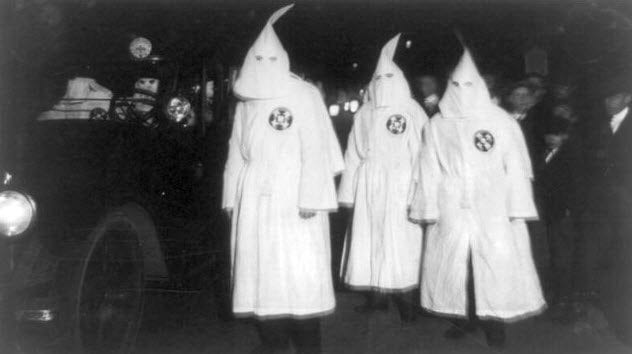 In 1920, newspapers across the US were abuzz with news on the growth of a new Ku Klux Klan. The old group of the South had been resurrected in 1915 by a “professor of Southern history at Lanier University in Atlanta.” The resurrected group had 34 members, including three members from the original Klan.

By 1920, membership grew into the tens of thousands across the southern US. The goal of this new Ku Klux Klan was to “insulate the sacred principles and noble ideals of chivalry, the development of character, the protection of the home and the chastity of womanhood, the exemplification of a pure patriotism toward our glorious country, the preservation of American ideals and the maintenance of white supremacy.”

9 Businessmen Wanted Nothing To Do With Them 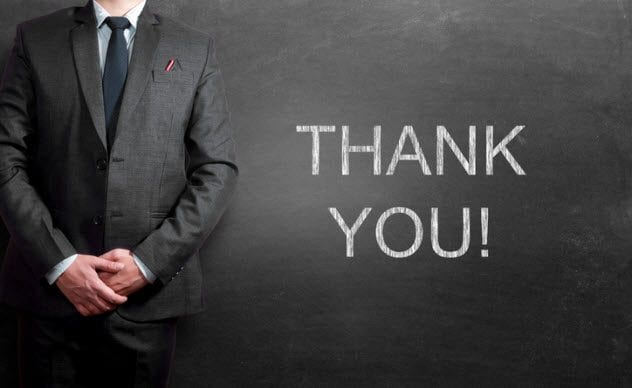 Smart businesspeople know what is good for business and what can tear a business apart. It was no different in the recent past when people from all walks of life were doing their best to publicly separate themselves from the Ku Klux Klan.

Back in 1921, a Philadelphia newspaper printed a thank you letter from the South Street Business Men’s Association. Apparently, this particular newspaper was taking a stand against the Ku Klux Klan and their covert operations geared toward recruiting new members.

The businessmen called the Ku Klux Klan “a conglomeration of hoodlums and swindlers masquerading as ‘patriotic Americans.’ ” These businessmen also hoped that the newspapers carried on “the good work of exposing the so-called ‘True Americans.’ ”

8 Knights Of The Road 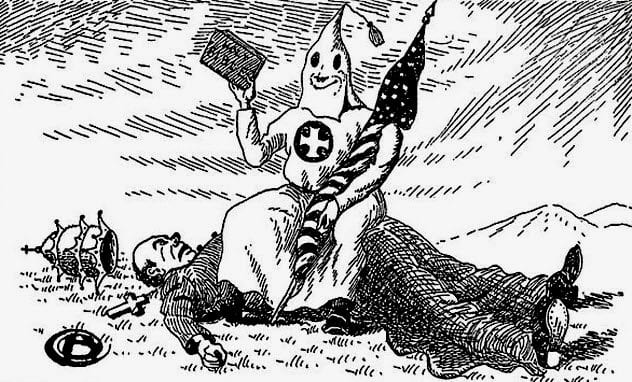 To combat the bigotry of the Ku Klux Klan, a counter group started up across the country. Calling themselves the Knights of the Road, the secret order began with 6,000 members, with the largest chapter being in New York City.

The sole purpose of the Knights of the Road was to oppose the Ku Klux Klan. The “Knights intend to fight propaganda against Jews, Catholics, or members of any other religious sect, to effectively quash any attempt to pave the way for a religious war in the United States, to combat the Ku Klux Klan or any other organization that may follow in its footsteps and to prevent America’s highways being blocked by ‘bunk, bomb, or bums.’ ”

The organization accepted women as members and welcomed people from all races and religions. 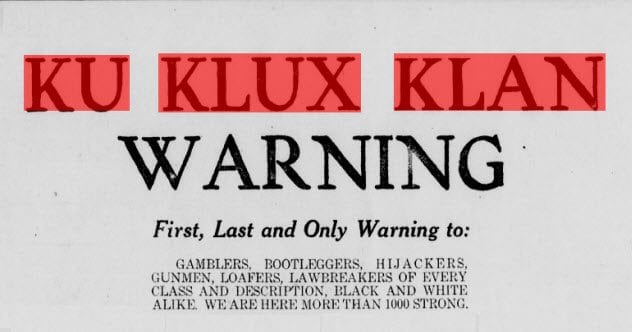 The Ku Klux Klan started to publish “warnings” in newspapers across the South and Midwest. One warning published in 1921 promised to be the “first, last, and only warning.”

In the ad, the Klan announced that they were “100 percent American, ready to make any sacrifice for our beloved country.” They also demanded “that the black stain of shame be forever wiped from the good name of Ardmore and Carter County” in Oklahoma.

Telling people that “the unseen eye is upon you always, by day and by night,” the Klan promised that anyone, black or white, who didn’t meet their approval would be dealt a “swift, stern retribution.” 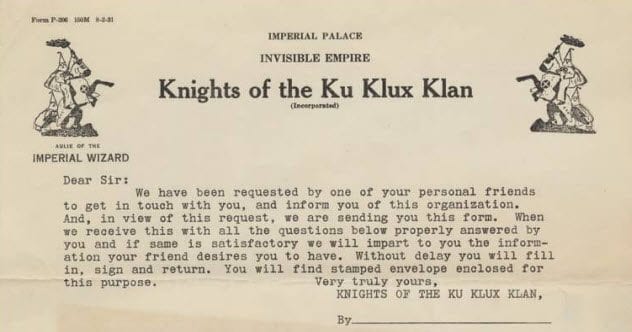 In 1921, Samuel Gompers, the president of the American Federation of Labor, declared that the Ku Klux Klan was nothing more than a moneymaking machine aimed at organizing “roving bands of marauders, setting their will above the law.”

The Ku Klux Klan offered membership into their “organization” for a price. They had a staff of trained salesmen to handle the recruitment and collect the $10 initiation fee and membership fees.

With the profit, the higher-ups of the Ku Klux Klan set their sights on changing the country to serve their views. They became involved in local elections and “destroyed or strengthened the chances of candidates for various offices.” 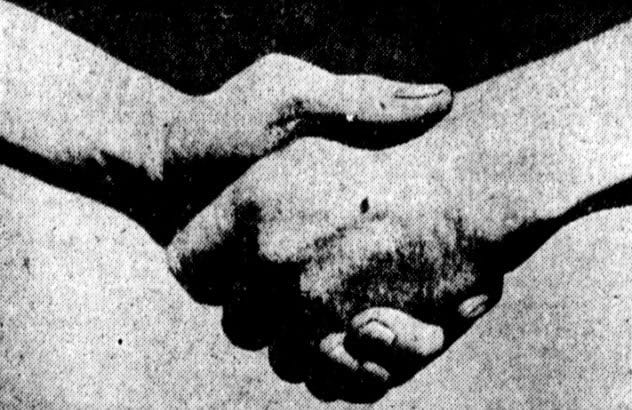 What is a club without a secret handshake? The Ku Klux Klan had their special handshake to let other members secretly signal each other that they were in the club. Funnily enough, the handshake was not all that secret because someone shared the handshake with the papers and it was published in 1921 as “part of the most carefully guarded mysticisms of the order.”

4 People Attracted To The Mysticism 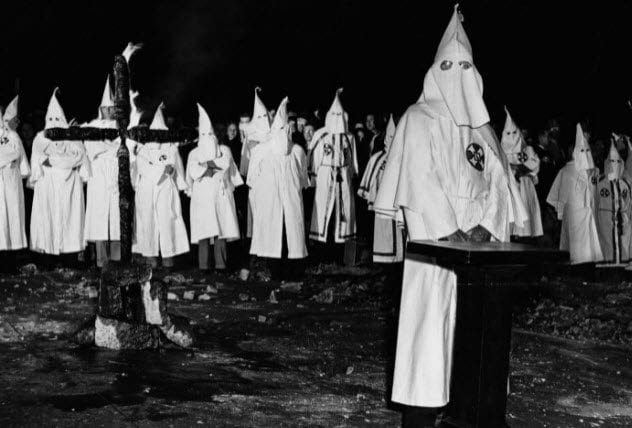 It is the nature of people to want to be part of something bigger than themselves. Throw in some strange mysticism, and you have a winning combination to pique the curiosity of outsiders.

The Ku Klux Klan was well-known for its mystic setups. They used their own hieroglyphics and almost Norse-like symbology to either impress or scare outsiders. They had an initiation, a swearing of the oath, and were reported to perform occult rites in the night.

The show was topped off with men wearing their gowns and hoods of white, made to both resemble ghosts and hide their true identities. They met in fields and in the woods to discuss how to take action against those they hated. 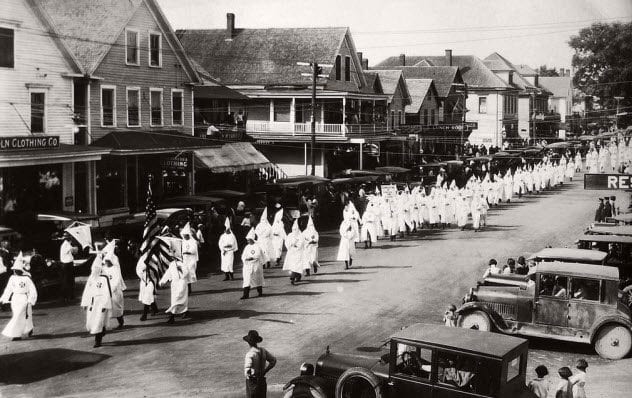 It was not enough to terrorize the people of the Southern states. The Klan wanted to invade the Northern states, too. They set plans into motion to open up branches in New York City, Philadelphia, and other metropolitan areas. Since the South could not win their war with guns, they were going to win the war by spreading hate.

The Klan deeply feared that the “14 million people of the colored race [were] organizing.” The Klan also worried about anarchists gaining entry into the government. The only way they felt that they could stop the country from changing was to fill it with their people to help spread the fear of progress. 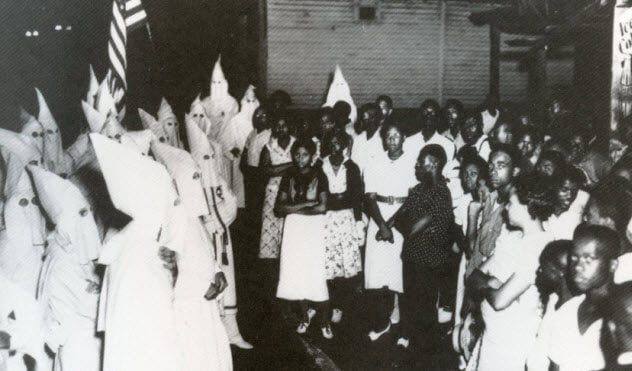 An African-American dentist was mutilated by Klansmen for “association with white women.” A bellboy was “taken out by masked men, whipped, and the letters ‘KKK’ burned on his forehead with acid” for talking to white women.

Another man, who was just released from jail after being found not guilty of “making insulting approaches to white women,” was grabbed by the Klan and given 60 lashes.

These so-called men of the Klan were cowardly and had no legitimate reason to attack their victims, so the Klansmen used women as an excuse for their barbarity. 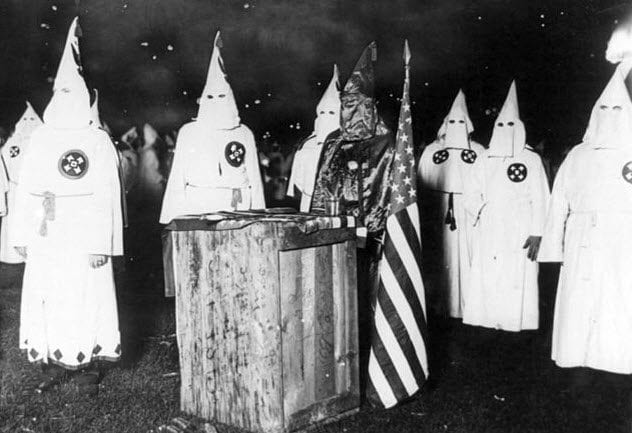 African Americans were not the only targets of the Ku Klux Klan. In winter 1921, Klan members in Texas seized a lawyer and cut off his hair. He was ordered to leave town immediately. His crime was “too close fraternization” with African Americans. In spring, an automobile salesman was whipped for “annoying high school girls” and numerous men were tarred and feathered for no known reason.

The list goes on. The Ku Klux Klan were out of control and terrified the country with their vicious and unlawful acts.

10 Serial Killers Who Were Shockingly Released From Prison Early