Used loosely, “mountain” may refer to any large pile, and a few of the mountains mentioned here aren’t exactly natural elevations of their planet’s surface. However, they are massive, and they’re either astonishing or mysterious. Here are ten mystifying mountains. 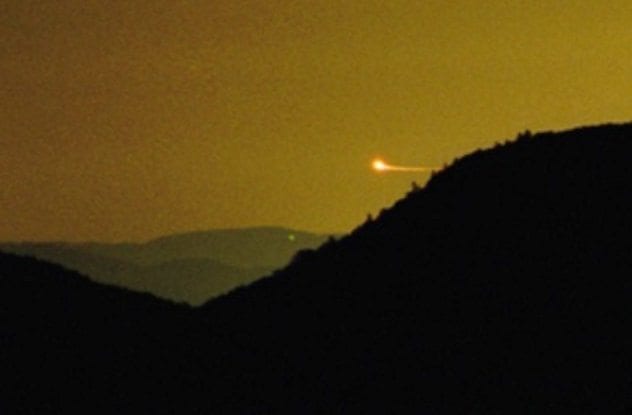 After spending years hoping, to no avail, to see the mysterious lights rumored to flit about Brown Mountain in North Carolina, Appalachian State University physics professor Dr. Daniel Caton was about to call it quits for good. Then, on July 17, 2016, he spied an orb streaking over the mountain ridge. It vanished, reappeared, vanished again, and reappeared a second time.

He checked both cameras recording the phenomenon to make sure that each had filmed the orb’s strange behavior. If they hadn’t, he’d have attributed the light to a lens flare, but both cameras captured the same images. While he could rule out lens flares, he could find no explanation for the mysterious orb, and the Brown Mountain lights remain mysterious to this day.

9 Mountain In A Moat 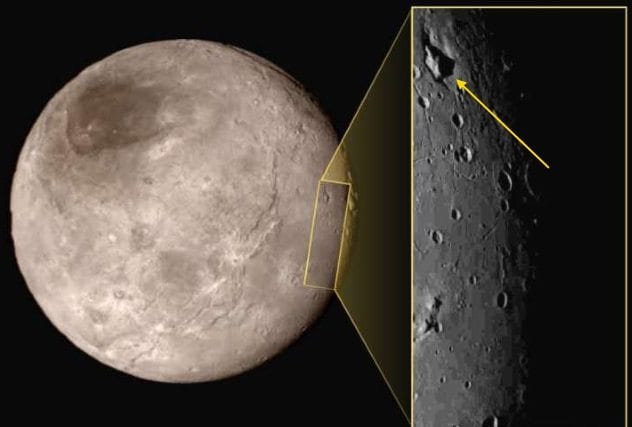 NASA scientists are puzzled by a newly observed feature on the surface of Pluto’s biggest moon, Charon. Described as a “mountain in a moat,” the raised mound inside a “depression” was captured by NASA’s New Horizons Geology, Geophysics, and Imaging team when its spacecraft flew by the moon on July 4, 2015, during the ninth year of its interplanetary journey.

Scientists hope a clearer picture of the “mountain in a moat” will clarify the mystery once “full-fidelity data” are retrieved from the spacecraft’s imaging equipment. 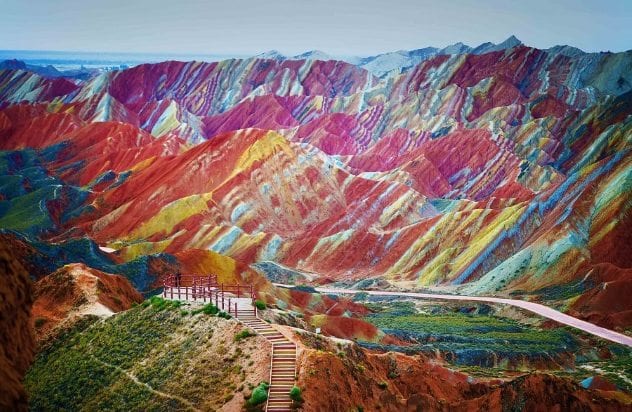 It took nature 24 million years to create the aptly named Rainbow Mountains, part of China’s Zhangye Danxia Landform Geological Park. The mountains, which rise in steep, thick, jagged angles, are composed of colored sandstone. After having been compressed for ages, the rock was forced upward by shifting tectonic plates, forming sharp, towering peaks.

As a result, the mountains are veined with bright orange, yellow, blue, green, red, brown, and other colors, which give them a festive, at times magical, appearance. Portions of the mountains look like ribbon candy, and other areas resemble prisms scattering colors across miles of rugged peaks. Many appear to have been painted by gigantic brushes. 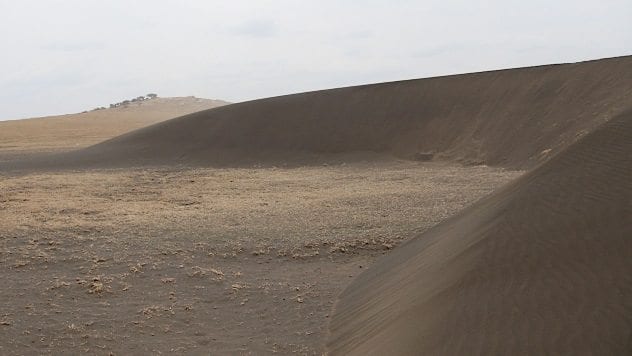 Mountains aren’t supposed to move, but a towering mountain of sand is doing just that, traveling at a pace of 20 meters (66 ft) each year. It’s not just the massive dune that moves, either. According to Tanzania’s former president Jakaya Kikwete, a handful of the mountain’s sand “continued to move” even after he’d transferred it to his car.

Standing 10 meters (33 ft) tall by 100 meters (330 ft) wide, the crescent-shaped mountain of sand changes shape and direction every decade. It once even split in two and traveled in different directions. It’s believed to be the product of a volcanic eruption. The Ngorongoro Conservation Area Authority uses beacons to track and predict the mountain’s movements. 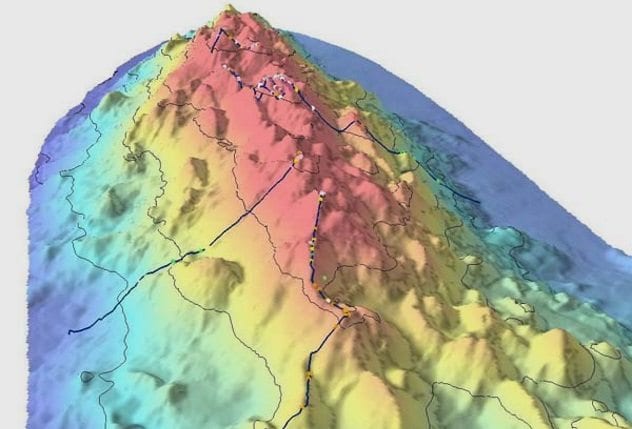 A pair of camera-equipped submersibles known as Pisces IV and Pisces V have taken scientists miles beneath the sea, where they have viewed seamounts, underwater mountains whose peaks don’t break the surface. Some rise 3,000 meters (9,800 ft) from the sea floor, and the mountains extend over much of the ocean.

Largely unexplored, the seamounts are home to rare and unusual creatures, including kitefin sharks, cutthroat eels, and possibly new species of corals. A video captured a dumbo octopus changing colors as it swam past Pisces V, apparently in the process of shedding its skin, and another video captured an ominous-looking Pacific sleeper shark, its dark shadow following it across the sea floor as it swam alongside the submersible. 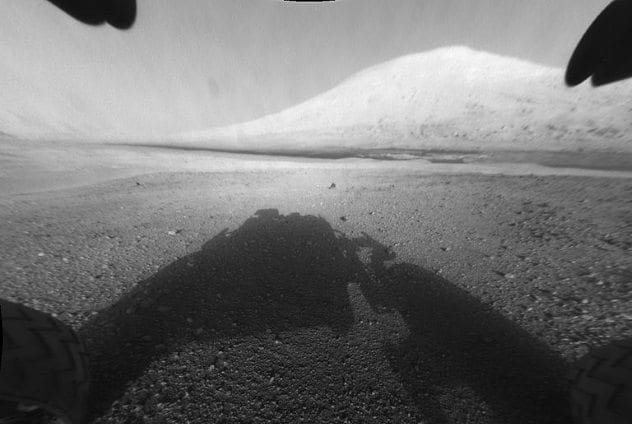 After five years of studying 100 possible locations, in July 2011, NASA selected Gale Crater on Mars as the landing site for its Curiosity rover because the mound inside the pit showed signs of containing water, which is necessary for life. The origin of the mountain inside the crater, called Aeolis Mons or Mount Sharp, is unknown, and the crater is located in “varied terrain.” Curiosity’s mission was to seek carbon-based organic compounds similar to those which make up terrestrial life.

These compounds, scientists believed, might be found on the foothills of Mount Sharp. While astrobiologists agree that there’s no set definition of life, they also believed Gale Crater and its mountain were the best places on Mars to start their search for extraterrestrial life.

Scientists now believe the mysterious 5.5-kilometer-tall (3.4 mi) mountain was not created by water as they’d hoped. It’s made mostly of built-up layers of lake silt deposited by wind. However, they also believe that Mount Sharp’s foothills “were exposed to liquid water long ago” and that the mysterious mountain may have once been large enough to completely fill the 154-kilometer (96 mi) crater. 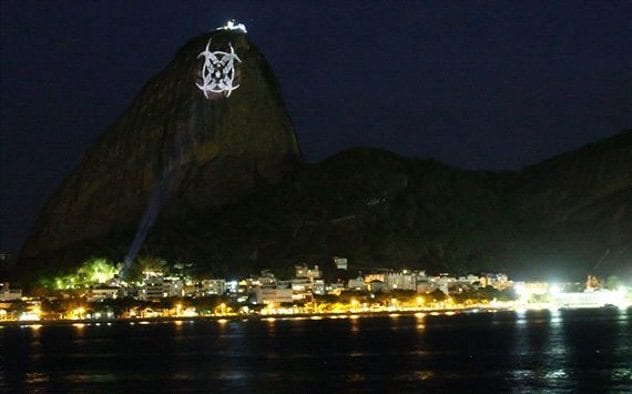 Towering above Rio de Janeiro, Sugarloaf Mountain stands 396 meters (1,299 ft) tall and is a world-famous geological feature. However, the strange signs, symbols, and texts which once appeared on the sides of the granite peak are mysterious indeed. In October 2013, green laser beams created “scrambled symbols” suggestive of a cryptic message. An eerie hologram resembling a pinwheel of four feathers framed by intersecting curved lines remained on the side of the mountain for two hours before gradually vanishing, to be replaced by the text: “#WINNER TAKES EARTH.”

Some suppose the mysterious messages may have been related to Brazil’s hosting of the 2014 World Cup competition, but the meaning of the bizarre messages remains a mystery. 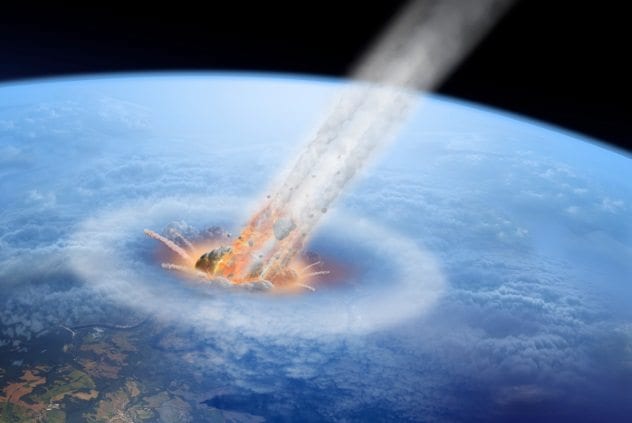 In mere minutes, the same asteroid that killed the dinosaurs 65 million years ago created a mountain taller than Mount Everest. Located on the Yucatan Peninsula, near Chicxulub, Mexico, the mountain occupied the center of the asteroid’s massive impact crater, which measures 180 kilometers (112 mi) across. Instead of rising in a single peak, the “instant mountain” formed a peak ring, a roughly circular, broken ridge in the center of the crater.

There are two theories concerning the origin of the mountain. According to one, the peak ring was formed when the asteroid’s impact melted the top of a peak, causing it to form a ring of disconnected peaks. The other theory contends the asteroid penetrated so deeply into the Earth that it caused the crater to implode. Scientists investigating the carter’s peak ring believe it was caused by the collapse of the peak, which then formed the peak ring, a view known as the dynamic collapse model.

2 The Great Dune Of Pyla 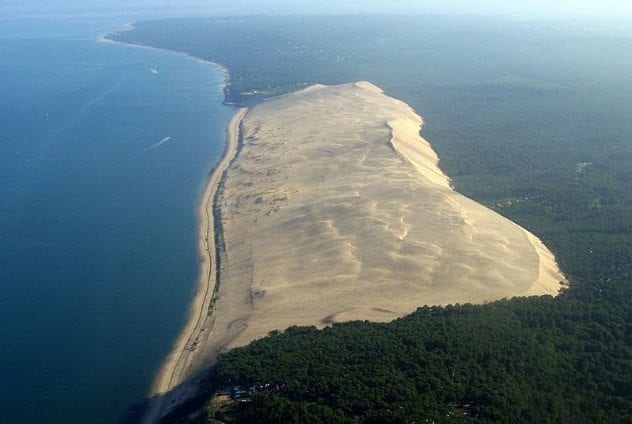 Along the way, it has engulfed or buried 20 private properties, 8,000 square meters (86,000 ft2) of pine forest, and a road. Oceanic winds are responsible the massive dune’s movement. The mountainous dune has become a tourist hot spot, attracting climbers (assisted by a staircase with a fence for a rail), paragliders, and hikers. 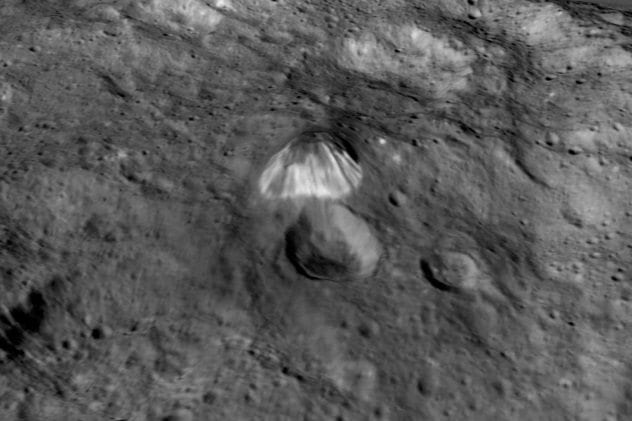 Ahuna Mons (aka “the Pyramid”) is located “in the middle of nowhere” on the dwarf planet Ceres, which mystifies NASA’s Dawn spacecraft mission science team member Paul Schenk, a geologist at the Lunar and Planetary Institute in Houston, Texas. Normally, such formations are associated with craters. Nearly 6.5 kilometers (4 mi) high and 16 kilometers (10 mi) wide, the pyramid-shaped peak is also mysterious for another reason: Inexplicable “bright streaks” run down its sides, resembling the equally mysterious bright spots that appear inside Ceres’s Occator Crater.

Initially stumped as to the origin of Ahuna Mons, scientists now believe it may be “a gigantic ice volcano.” Erupting saltwater from the planet’s interior caused the Pyramid to form gradually, over millions of years. David A. Williams of Arizona State University’s School of Earth and Space Exploration says scientists hope to see “some venting” as Ceres approaches the Sun.

Gary Pullman lives south of Area 51, which, according to his family and friends, explains “a lot.” His 2016 urban fantasy novel, A Whole World Full of Hurt, was published by The Wild Rose Press and is now available on Amazon.com. An instructor at the University of Nevada, Las Vegas, he writes several blogs, including Chillers and Thrillers: A Blog on the Theory and Practice of Writing Horror Fiction and Nightmare Novels and Other Tales of Terror.