That last of the ancient Olympic Games was held more than 1,600 years ago. For one final time, the strongest and quickest men locked into a ferocious competition to find the greatest athlete in the world. Sure, we brought the Olympics back by name in 1896, but it wasn’t the same. Much has changed, and a lot of traditions the ancient Greeks enjoyed didn’t get carried over to the Olympics we watch today.

10The Ritual Sacrifice Of Animals 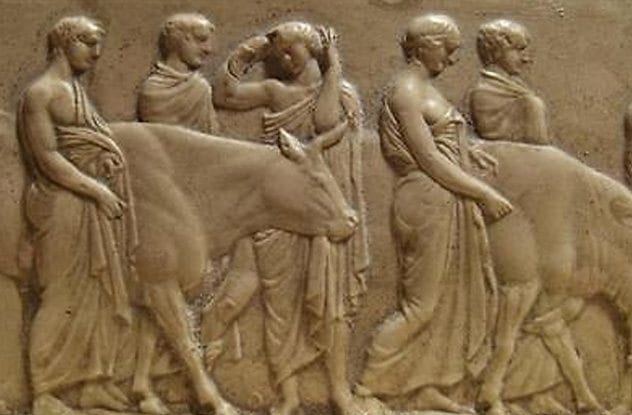 The Olympics began with the athletes entering a temple. There, they stood before an imposing statue of Zeus brandishing his thunderbolts. A sliced piece of a boar flesh would be put before them, and they would have to swear an oath to the gods over it, promising to obey the rules of the games.

It was a strange way to start, but it was nothing compared what was to come. The real highlight came on day three, when a procession of 100 bulls were marched to the Great Altar of Zeus and ritually slaughtered by priests before a crowd. Some of the meat would get eaten, but the animals’ thighs would be burned to a crisp as a sacrifice to the gods.

9Eating Sheep Testicles As A Performance-Enhancer 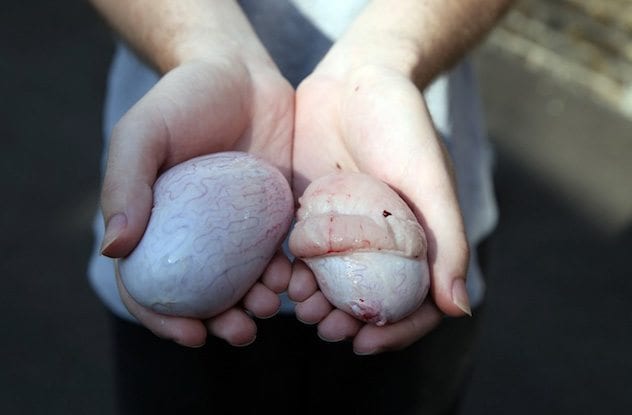 The Greeks viewed testicles as a performance-enhancing drug. From watching eunuchs and castrated animals, they’d figured out that there was some kind of connection between testicles and manliness. They didn’t quite understand the biology, but they knew there was a link, and they were pretty sure the best way to become manly was to eat as many testicles as possible.

Of course, there were alternatives. Some would get ready by eating a ground-up mix of donkey hooves and rose petals. Others would eat live bees.

A few took a dirtier route. They would try to place curses on their opponents, which the Greeks were pretty sure really worked. There are stories from the Olympics that tell of athletes veering off course or not making it to the starting block, mistakes the Greeks chalked up to magical hexes.

8Athletes Competing In The Nude 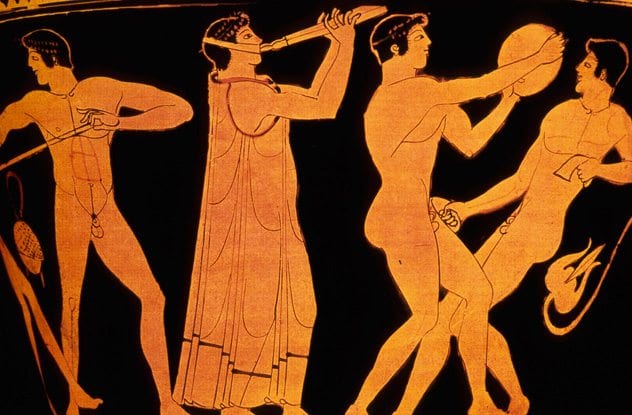 We’re not entirely sure why the Greeks insisted on letting it all hang loose. According to one legend, it all started when a runner tripped on his loincloth and decided to say to hell with clothes. Others think that the Greeks took competing naked as a matter of pride, believing that only a barbarian would try to hide his nakedness. Either way, they didn’t just go naked, they made a show out of it. They would lather themselves up with olive oil and parade around the stadium showing off.

The people loved it. Some even wrote poems about it. We have one from a poet named Bacchylides, who was trying to describe an athlete throwing a discus. He got so caught up in the moment, though, that he threw in, “In such a way, amid the vast, circling crowd of the Greeks, did he display his wondrous body.”

7The Thong That Just Covers The Tip 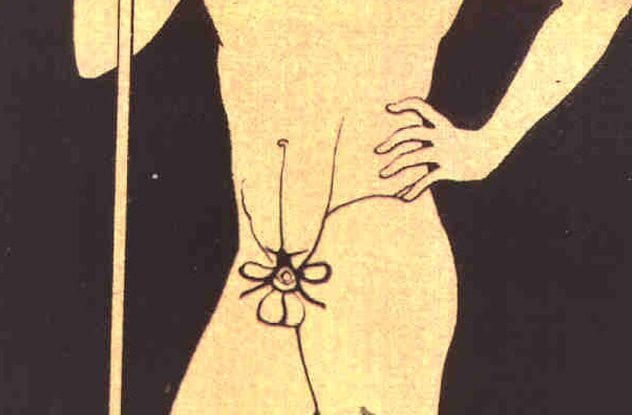 They were almost entirely naked, anyway. Some athletes indulged in one little allowance: the kynodesme. This was something sort of like a jockstrap or a thong, except that it covered nothing but the tip of the penis. It would be tied around the athlete’s waist, with a tiny little bow around the penis as a decorative flourish.

This wasn’t out of modesty—in fact, it didn’t even cover up your genitals. All it covered was the foreskin, which, to the Greeks, was an incredibly valuable body part. They viewed long, draping foreskins as the epitome of handsomeness. Greek art is full of men with absurdly long foreskins. They show up so often that historians aren’t even sure if these are paintings of an ideal man or if that’s just really what ancient Greek genitals looked like.

Sometimes, the kynodesme had an aesthetic value. Some were elongated to make the foreskin look bigger than it really was. It was such a popular look that some people wore them at home instead of just at the games. 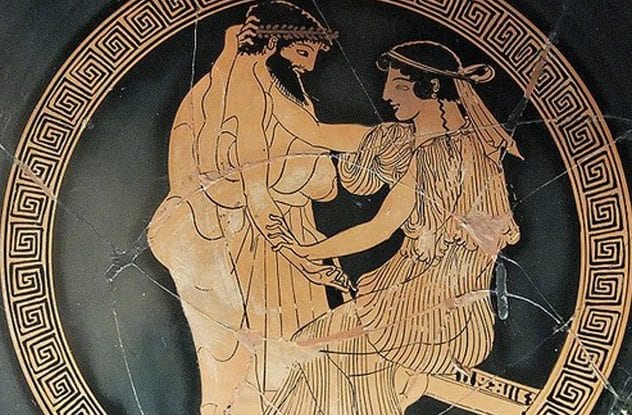 Prostitutes and parties were huge parts of the Olympic games. Women from all over the Mediterranean would travel out to the Olympics to sell their bodies. In the five days of the games, a prostitute could make as much money as she made throughout the whole year.

Some of these women made ends meet by working as weavers during the day. So, when you walked down the streets during the day, the prostitutes would be out on the streets weaving. They would be half-naked, weaving clothing as saucily as it’s possible to weave clothes, hoping to lure in another client.

5Pankration, The Mixed-Martial Arts Sport With No Rules 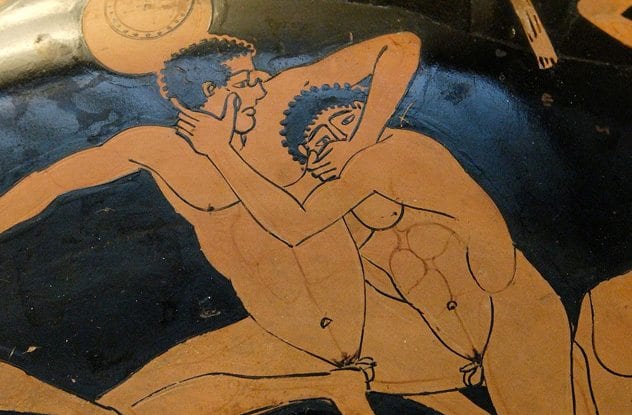 The Greeks had a sport called Pankration that was sort of like our modern mixed martial arts. Two men would lock into combat, free to use whatever fighting style they wanted until one submitted. Other than bites, eye-gouges and beating the genitals, everything was allowed.

Pankration competitors could do almost anything, and they did everything. Some of the moves they used were incredibly brutal. One fighter, Sostratos of Sikyon, earned the nickname “Mr. Fingertips” because he liked to start matches by breaking his opponents’ fingers. Another fighter, Arrhachion, literally killed himself trying to win. While he was being strangled between a pair of thighs, Arrhachion dislocated his opponent’s toe. His opponent gave in, and Arrhachion died from suffocation, becoming the first Olympian to win while dead. 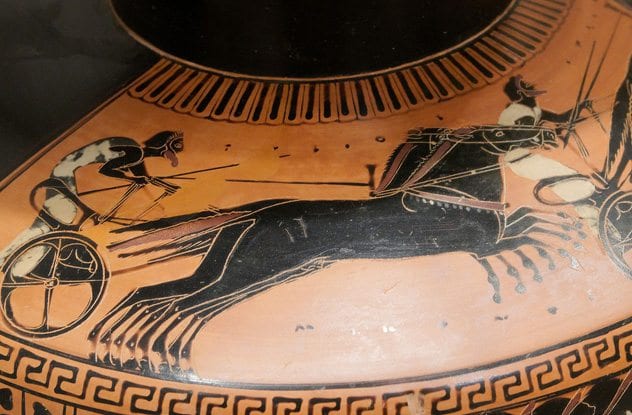 The chariot races were incredibly deadly. There would usually be about 40 chariots on the tracks, and as they turned, their wheels would lock together. Some would go flying off-course and crash, while others would go flying right into the audience. In one case, a race started with 21 chariots, but by the time it ended, only one was left standing.

The sport claimed countless lives, usually in front of a cheering crowd. That may well be why the wealthy people who owned the chariots typically didn’t ride them. Instead, they would hire other people to ride in the chariot race for them and could still win an Olympic wreath for paying someone else to risk his life.

3The Race In 70 Pounds Of Armor 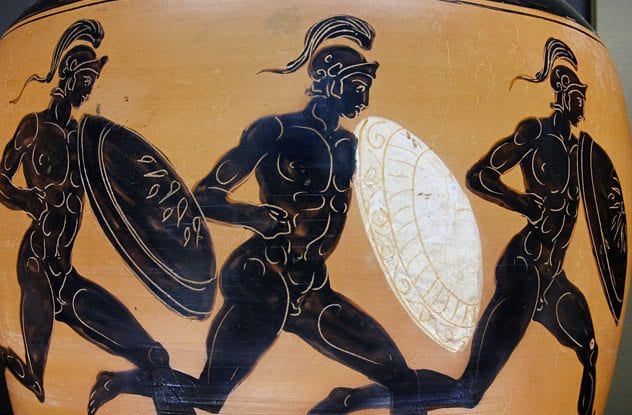 The last foot race of the Olympics would be the Hoplitodromos, and it was crazy. The competitors would come to the starting line with a helmet on their heads, metal greaves on their shins, and a shield in their hands. They carried 50–70 pounds of armor with them, and they’d be expected to run in it.

They wore nothing else. This was the Olympics. They couldn’t wear clothes. They were just naked people in helmets and shin guards.

The Olympians would have to run 400 meters as quickly as they could with all this armor weighing them down. We’ve tried to recreate it with modern athletes, and it was disastrous. No one could keep their shield up after 70 meters, and they were staggering and struggling to move after 275 meters.

2Not Letting Women Enter, Even If They’re Competing 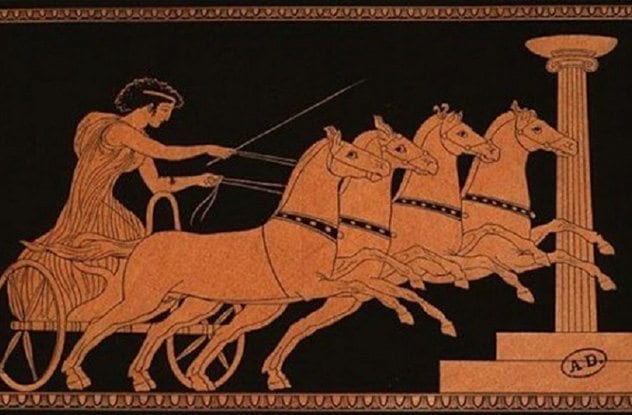 Virgin girls could watch the Olympics. They were encouraged, in fact, because they’d try to hook up with the athletes. Adult women, though, couldn’t. With the sole exception of the Priestess of Demeter Chamyne, who would watch over the Olympics atop an ivory altar, women couldn’t get in no matter what.

That including women who were competing. A Spartan woman named Cynisca entered a chariot team into the Olympics. She funded and trained them, but she wasn’t allowed riding them. She was forced to hire men to ride her horses for her and wasn’t even allowed to watch them go around.

She won—twice. She even had a monument made in her honor inside the Olympic stadium. Being a woman, though, she wasn’t allowed to watch them unveil it, and she was never permitted to walk in and see it. 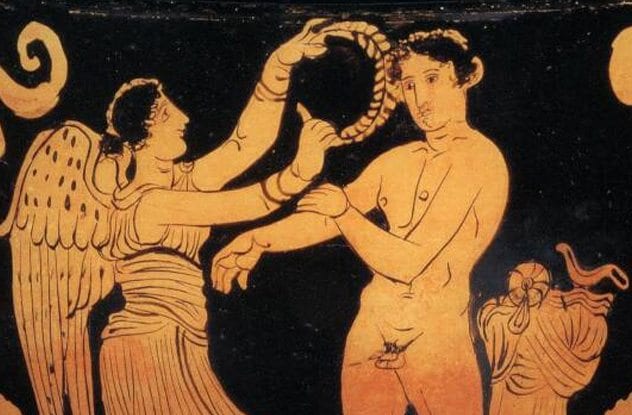 The winners were treated like gods. On the final day of the Olympics, they received wreaths from a wild olive tree. Statues were built in their honor. Songs and poems were written for them. They were paraded home in a chariot, given heaps of money and assured that they would never have to pay taxes again.

Some cities, though, thought all that wasn’t going far enough. Their winners deserved a little more. A city with strong men, the Greeks believed, needed no walls to defend itself. And so, when their athletes came home, they tore down a whole section of their walls and let the winning Olympians march over the rubble.