A wedding is a beautiful ceremony that commemorates the union of two people on a journey of sharing the rest of their lives together. Each culture has its own customs as to how people get married, usually depending on religious beliefs and sometimes on superstitions as well.

Some of these rituals are better known than others. Here is a list of 10 wedding traditions from around the world that are unusual yet interesting in their own ways. 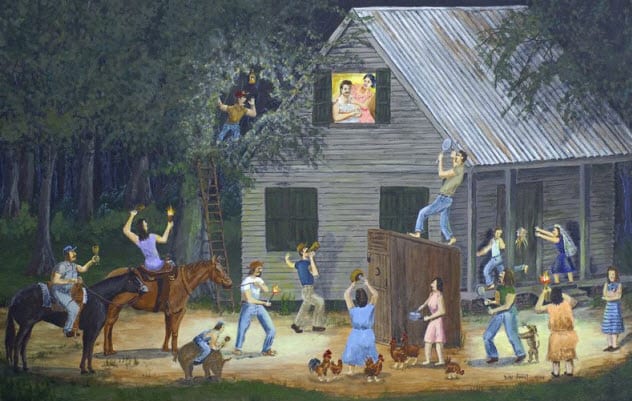 In France, when people got married (especially couples who were young), friends and family gathered at the house of the newlyweds and banged on pots and pans while yelling and singing. The newlyweds had to come out and serve these visitors drinks and snacks and sometimes even give them money to make them go away.

In more extreme cases, if the visitors were ignored, they would break into the house and kidnap the groom and leave him somewhere far away. He would then have to find his way home while probably undressed.

This tradition of the charivari (aka the shivaree) started in the Middle Ages. When widows were supposedly getting married too soon, neighbors engaged in this disruptive behavior on the wedding night. However, the tradition is all in fun.[1] 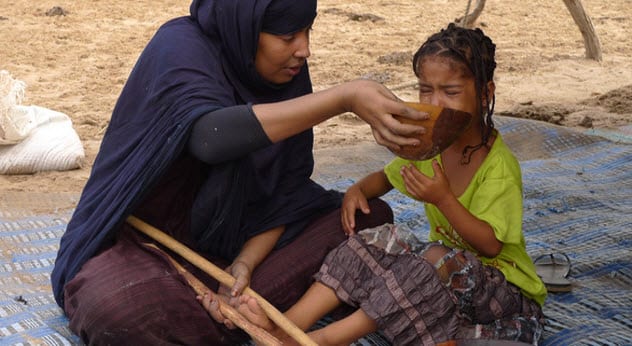 In Mauritania, the bigger a girl is, the more attractive she becomes. This is why parents send their daughters, some as young as five years old, to “fat camps” during summer to gain weight. This tradition is known as the Leblouh. The girls have to eat an absurd amount of food and may even be force-fed in some cases.

It is believed that these girls consume up to 16,000 calories per day. This practice stems from a belief that a woman’s size indicates the space she occupies in her husband’s heart. A woman’s size also indicates the husband’s wealth. The richer he is, the bigger the wife he can afford.

When the time comes, a man and his family would choose his bride and make an agreement with her family. The bigger the girl, the more desirable she becomes.[2] 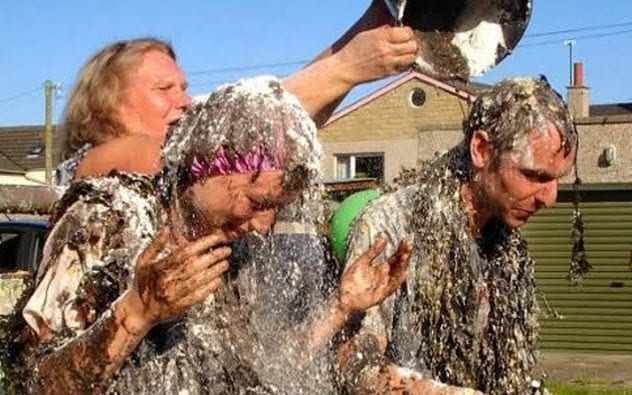 The Blackening, a traditional Scottish wedding custom, is done before the ceremony as a way to symbolize the hardships of marriage. The bride, the groom, or both are doused in anything disgusting—such as eggs, dead fish, rotten food, curdled milk, tar, mud, or flour—by their friends and family.

Then they are either tied to a tree or taken around town in the back of an open truck. The idea is to get them to be very uncomfortable and have it witnessed by as many people as possible.[3]

It is believed that after going through this together, the couple can go through all the trials and tribulations that marriage entails. The Blackening is practiced mostly in the rural areas of northeast Scotland. 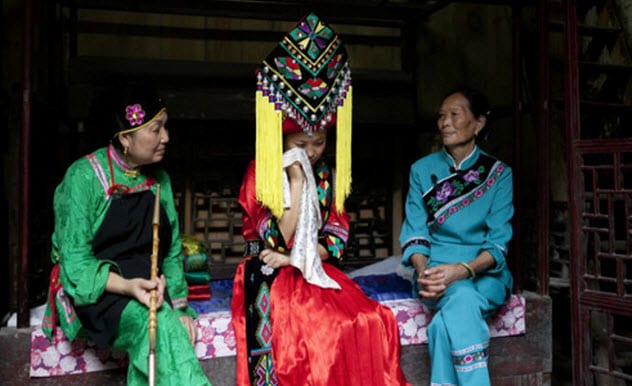 There is a custom among the Tujia people of China for every bride to cry at the wedding ceremony. The elders believe that this practice can be used to express the bride’s gratitude and love toward her parents and other family members. If the bride doesn’t cry, then the guests look down on her as a poorly cultivated girl.

The bride begins to practice her crying a month before the actual wedding. She spends an hour every night weeping loudly. After 10 days of this, the bride’s mother joins in the practice, followed by the bride’s grandmother and other female relatives. The tears do not signify sadness but rather joy and hope. This practice is not as common anymore.[4] 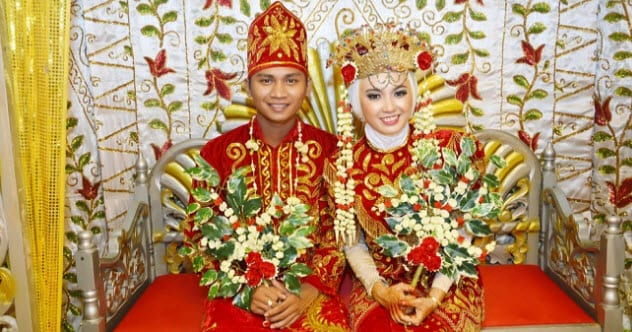 Even though many wedding traditions are observed by the Tidong people of Borneo, the oddest one bans the couples from using the bathroom for three days after the wedding. This means that the bride and groom have to hold their pee and poop for three days in a row.

If they do use the bathroom during this period of time, they believe that it will bring terrible luck to the marriage. It will be filled with infidelity or even the death of their children at a very young age.

During this post-wedding period, the couple is watched over by several others who feed them minimal food and drink. After the three days are up, the newlyweds are bathed and permitted to return to normal life.[5] 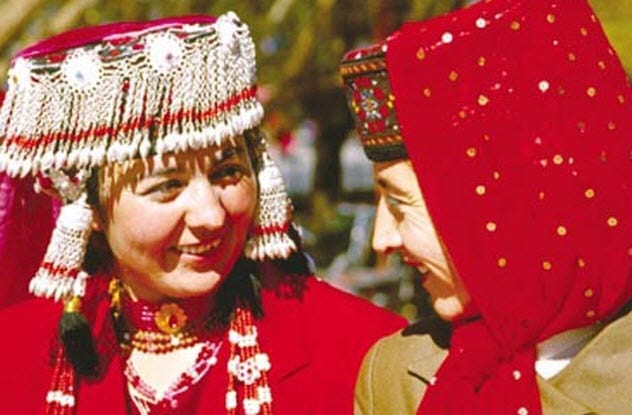 The Daur people of China and parts of Inner Mongolia have a unique way of choosing a wedding date. The engaged couple holds onto one knife and uses it to execute a baby chick. Then they dissect it to inspect its organs.

If the liver is healthy, the couple can set a date and start planning the wedding. However, if the liver is diseased, it is considered back luck. The couple has to repeat the process until they find a chick with a healthy liver.[6] 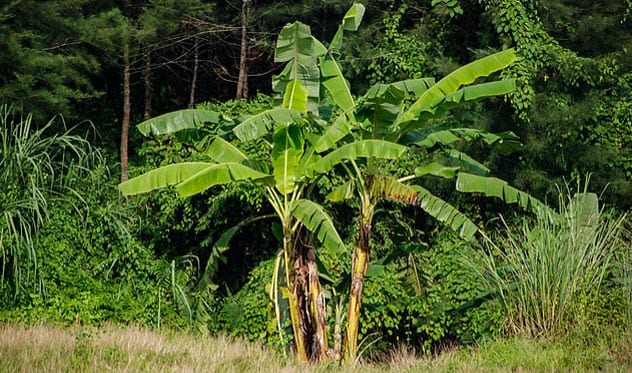 In some parts of India, astrological compatibility plays a huge role in marriage and wedding ceremonies. If the bride is born “Mars-bearing,” she is said to be cursed and to cause an early death for her husband.

To break this curse, she has to marry a banana tree. This tree is then destroyed, and the curse is lifted. However, this practice has been made illegal because it is believed to violate women’s rights. Nonetheless, people still practice it, even Bollywood stars like Aishwarya Rai.[7] 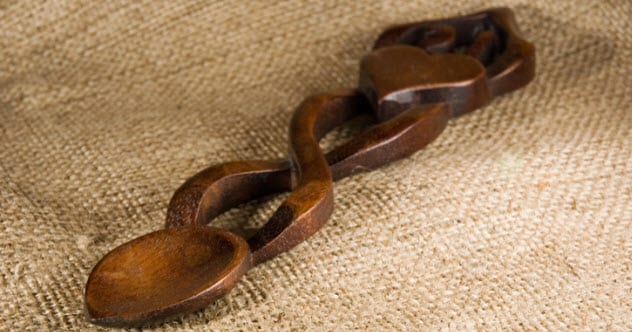 From as early as the 17th century, the Welsh have had a unique tradition of courtship. A young man would take a single piece of wood and ornately carve it into a spoon. Then he would gift it to the woman he is courting as a token of love and intention.

If accepted, the spoon became symbolic of an engagement between the couple. This love spoon also served as a promise that the groom would never let the bride go hungry.[8]

Nowadays, love spoons can be purchased. They are also given as gifts for other special occasions, such as christenings and birthdays. This tradition can be found in other parts of Europe as well. 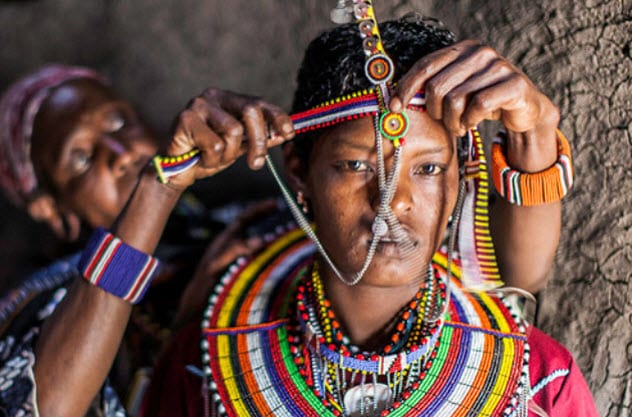 Maasai weddings are elaborate and involve many traditions. However, the most unusual customs involve spitting. After a marriage is agreed upon by the two families, a wedding date is set. On that day, an elder will spit out milk in front of the bride’s house to mark the wedding procession.

The bride is dressed in a colorful, bold outfit with necklaces made of shells and beads. Her head is shaved and oiled with lamb fat. Her father will then spit on her head and breasts. Spitting is believed to bring good fortune into the bride’s married life.[9] 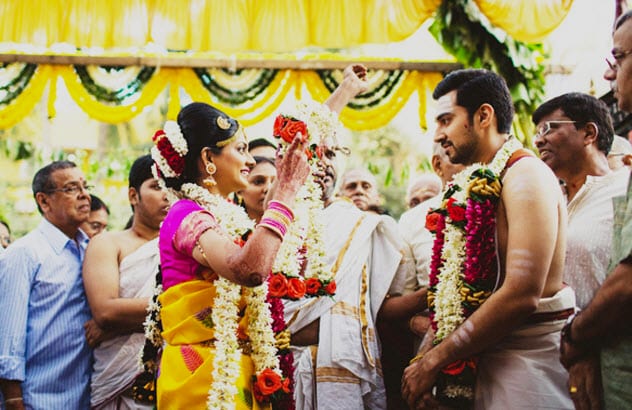 Another unusual wedding tradition is practiced by the Tamil Brahmins in southern India. In one of many rituals, the groom has to pretend to reconsider the marriage and leave to become a priest while his family members convince him to stay and go through with the wedding.

The priest who will officiate at the wedding is also involved in trying to “change the groom’s mind.” After all this, the groom eventually goes to the marriage hall, the bride’s family welcomes him, and other wedding functions begin.[10] 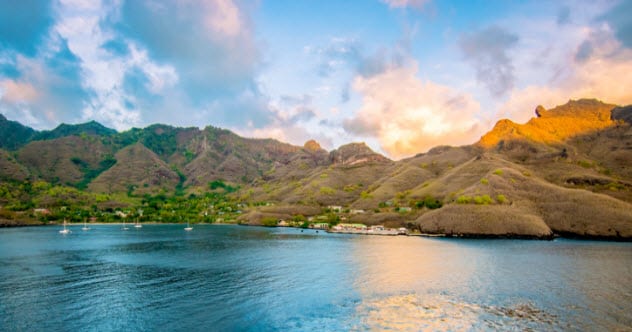 The people of the Marquesas Islands have a unique wedding tradition. After the ceremony is over, the bride’s relatives lie facedown and side by side on the floor. The couple then walk over them out of the wedding hall as if they were a normal carpet.[11]