Britain has been having a bit of a rough time recently. Facing down the barrel of Brexit and the uncertainty of what comes next has left the people feeling somewhat tense. Perhaps because of this, Christmas has taken on a new meaning this year. People began putting up their decorations extra early to focus on something, anything, that did not involve the B-word.

So with that in mind, and to spread a little more Christmas cheer, here are some weird British Christmas traditions that Brits could try in order to make the holidays a little more merry. 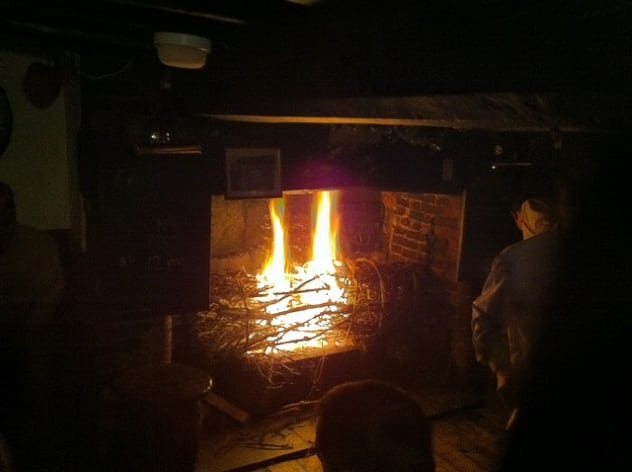 Burning the ashen faggot is a tradition that may date back to the Saxon age and was once widespread in the West of England. On Christmas Eve, a huge bundle of ash branches, the faggot, would be rolled into the house and placed on the fire. Being up to 1.8 meters (6 ft) long and 0.9 meters (3 ft), thick the faggot could be expected to burn for a long time. Tied with nine cloths, the bundle would be watched closely by those celebrating around it. One custom was for unmarried women to choose one of the cloths tying up the faggot. The woman whose cloth burned and snapped first would be the first of the maids present to be married.[1]

As with many Christmas activities, burning the ashen faggot could involve the imbibing of a cheering amount of alcohol. A verse from 1795 records another custom linked to the bindings around the bundle of wood:

It blazes soon; nine bandages it bears,
And as they each disjoin (so custom wills),
A mighty jug of sparkling cyder’s brought,
With brandy mixt to elevate the guests.

What could be more festive than a horse skull set on a pole? In the North of England, an old Christmas Eve tradition has been revived which brings that terrifying image back to the masses. The Poor Owd Hoss (“Poor Old Horse”) sees groups of men in various states of fancy dress parading through the streets and, it must be admitted, quite a few pubs, brandishing the horse skull with great glee. In Richmond, the horse is followed by singers in traditional hunting gear that pursue it with blasts of their trumpets.[2] Anyone who sees the Hoss is thought to be blessed.

In other places, the skull is painted red and used to menace revelers with its snapping jaws. Over the course of the night, several pubs may be visited by the Owd Hoss. It is not, perhaps, the sort of thing you want to see after a few pints. 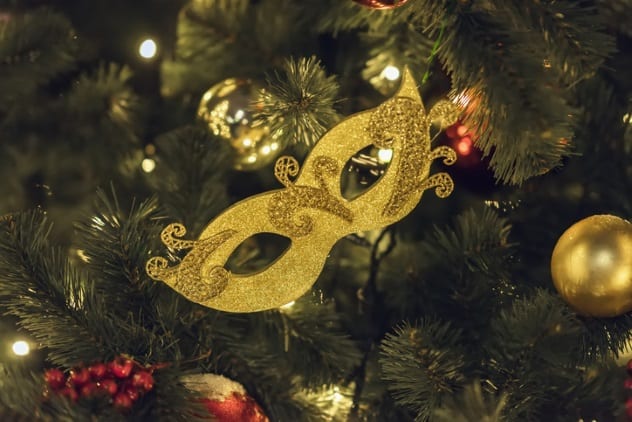 It is one of the 12 days of Christmas, and you are relaxing in your home, perhaps sleeping off your overindulgence. Suddenly, the front door crashes in, and four masked young people in strange clothes burst in singing and dancing. You have just been visited by geese dancers. The geese dancers, probably called this because they came disguised or ‘guised, would expect food, drink, or money for their entertainments. They might even put on a rude show of St. George and the Dragon in households that treated them well.[3]

While they were called geese dancers in certain places, it seems that nowhere was truly safe from them in Old Britain. Other locations had guisers, mummers, tipteers, and morris (merry) dancers that could arrive unannounced in your home. 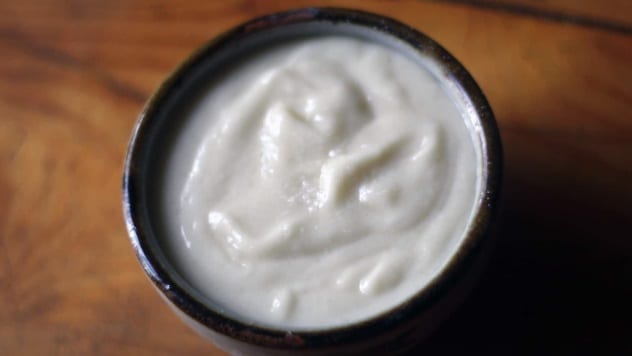 In some places in Scotland, Christmas Eve was known as Sowans Nicht. This was the night in which sowans would be served. Sowans is a fairly basic recipe which people might like to keep in mind if Britain finds itself strapped for cash after Brexit. Oat husks and finely ground oatmeal are soaked in water for a week. This gives it time to ferment and separate into a quivering mass called sowans and a liquid called swats.[4]

While this was a staple dish year-round for many, on Christmas Eve, the sowans is dressed up to make it more festive. Items and trinkets could be hidden in the gloopy depths of the sowans. Depending on who received which prize, people would be able to divine the future.

Boxing Day, as the British call the day after Christmas, has traditionally been a day for sleeping off the hangover from the day before, eating leftovers, and a trip to the pub. Usually, nothing more athletic than the lifting of a pint to the lips is attempted on Boxing Day. Some drinkers in the town of Grantchester are a bit more ambitious than that. Teams from four local pubs meet up to roll heavy barrels along a 91-meter (300 ft) course.

Given the shape of the barrels and the speed they are rolled at, collisions are common, and spectators watch the event from behind hay bales.[5] With the exertions of the day, many competitors find themselves getting thirsty, so this tradition joins seamlessly with that of the Boxing Day trip to the pub.

The wren is a sacred bird with many myths and legends associated with it. Some say that it tricked its way to becoming king of the birds by latching onto an eagle’s back and, when the eagle tired, launching itself high into the sky to claim the avian crown. Whatever the wren’s merits, there was one day per year in which it was mercilessly hunted throughout Britain, Ireland, and France. On Boxing Day, you may still find bands of people armed with sticks out hunting the wren. The feathers of the captured bird would be pulled off by the hunters.

Where, once, hunting the wren would end with a dead bird being proudly displayed dangling from a pole garlanded with ribbons, fake ones are now used.[6] The hunt is still attended by the drinking of alcohol, dancing, and distributions of food.

On Christmas Day in Kirkwall in Orkney, two enormous teams come together for the playing of Kirkwall Ball (or Ba’). Two games are played, one by the boys of the town and the next by the men. The players are divided into either Uppies or Doonies—those who have to get the ball up the road and those who have to get it down the road. The Uppies must get the ball to the top of the town, while the Doonies aim to get the ball down into the Kirkwall Bay. Over the course of several hours, the ball is wrestled across the town.[7]

Because there are so many players taking part, it is often hard, even for the competitors themselves, to know where the ball is. Eventually, though, the ball will reach one of the goals, and the battered teams will celebrate. The prize, the Ba’ itself, goes to the player on the winning team who is thought to have played best. 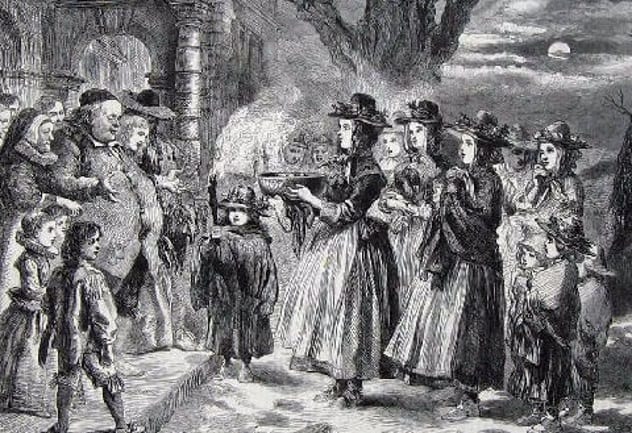 Carolers coming to your door can either be a welcome visit of Christmas joy or a loud and annoying intrusion. In the past, though, singers shouting, “We won’t go until we’ve got some,” were often being serious. These singers would turn up at doors carrying a large vessel filled with wassail—a spiced alcoholic drink. One particular type of wassail was called “lambs wool” and made made from warm ale, crab apples, sugar, spices, eggs, and cream. Its name derived from the pieces of toast floating in it that resembled lamb’s wool.[8]

In return for sharing their drink and song with the homeowner, the wassailers would expect a reward. Begging was frowned on my authorities, but wassailers were not strictly begging, as they were offering a drink first. Bad things could happen to your house if the singers were not rewarded for their efforts with at least a little “figgy pudding.” 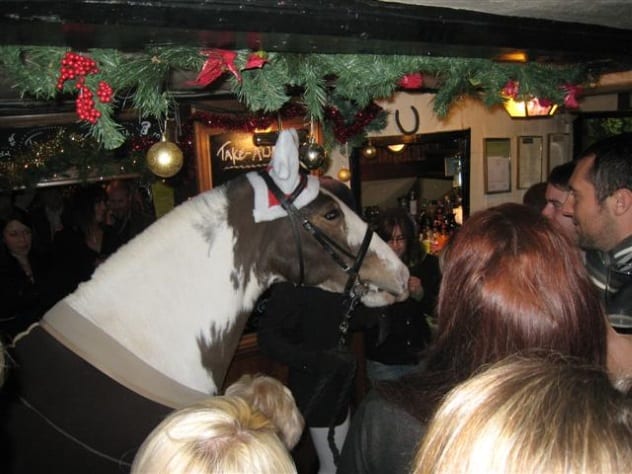 Usually, when there is a horse in a pub, something has gone horribly wrong, but in Britain, it may simply be the confluence of a number of unusual rites and customs. On Christmas Day at the Fox Inn in Bucks Green, Christmas dinner is always preceded by a horse being led or ridden through the middle of the pub. No one is entirely sure why this particular custom takes place, but the best guess is that it has to do with keeping a public right of way open. Apparently, if the path through the pub is not used at least once per year, then people might lose the right to use it at all.[9] No one seems to know if this is true or not, but it is certainly an effective way of announcing that dinner is ready.

Well behaved-horses are treated to bags of crisps (aka potato chips) and beer. 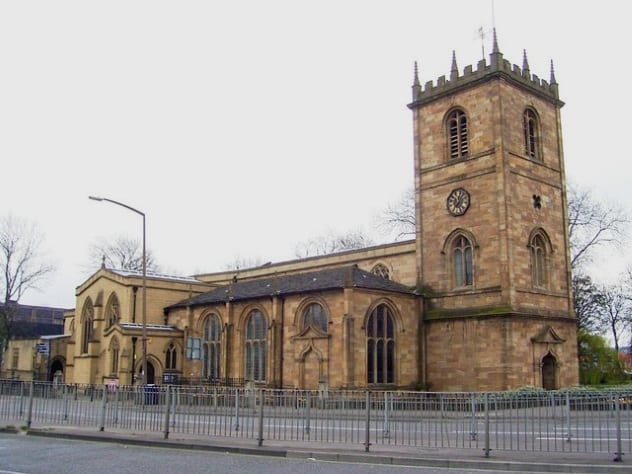 It is traditional to put as many candles on your birthday cake as your age, but when you are celebrating the birth of the son of God, you might want to do something a bit more showy. In Dewsbury, they mark Jesus’s birthday by ringing the church bells. Many churches may peal their bells a few times in celebration, but in Dewsbury, they ring them once for each year since His birth. This year, Tolling the Devil’s Knell, as the tradition is called, will involve the bells being struck 2,018 times.

The tradition is said to have begun when a squire forgot to attend Christmas service in the church in 1434. This so enraged the local knight that he threw the lad into a pond, where he drowned. Repenting, the knight atoned for his crime by buying a new bell for the church and asking for it to be rang.[10]

Ringers these days have so many repetitions to do that they work in a team, each pulling 100 peals before changing places. In case all the tolling of the bells confuses them, an electronic device records the number that they have reached.