So chances are good that most of us have found a porta potty to be a friend indeed in a moment of need. However, as these 10 bizarre objects found in porta potties indicate, these portable public toilets have sometimes offered something far different than welcome relief. 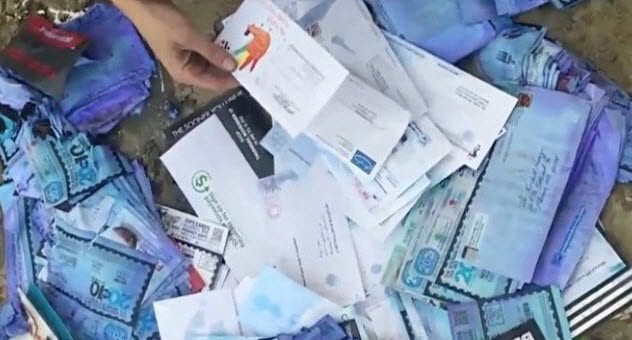 After complaining of mail delivery problems, residents of Macomb Township, Michigan, received an unpleasant surprise when a construction worker discovered their mail inside a porta potty in December 2016. The United States Postal System (USPS) delivery person had skipped the recipients’ mailboxes in favor of depositing their correspondence in the public toilet.

Hundreds of people were denied checks, holiday cards, store coupons, and other items. Dumped in the privy in mid-November, the recovered mail was blue because it had absorbed the color of the odor-reducing agent added to the toilet.

A USPS investigation identified the culprit as a letter carrier who has since resigned and is facing felony charges of mail theft. Some of the discarded mail was delivered after being sanitized. Other items must be reissued. 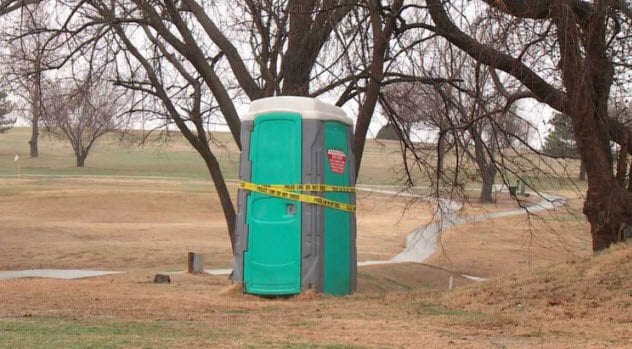 In February 2013, something smelled bad inside a golf course porta potty in Purcell, Oklahoma. Strange sports drink bottles containing chemicals made employees suspicious. They notified the police, who determined that someone had used the toilet as a miniature meth lab, making the drug using the “shake-and-bake” method.

Three bottles were found, but two of them exploded before police arrived on the scene. Had the porta potty been occupied at the time of the explosion, Purcell Detective Corporal Scott Stephens said that the occupant “might have gotten hurt by the flying plastic and the chemicals.”

Despite damage to the interior of the toilet, fingerprint evidence was recovered and it has furnished investigators with a lead. More than one person may be involved in the manufacture of the illegal drug and the destruction of private property. 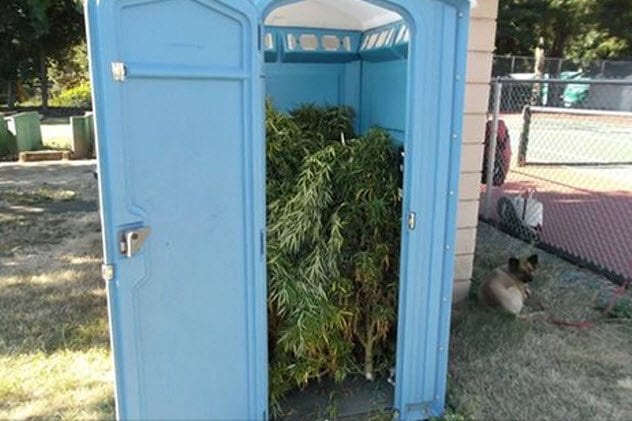 A man found marijuana plants in a porta potty in Rogue River, Oregon. In August 2016, he was walking his dog when nature called. The public toilet was sheltering several large marijuana plants near tennis courts at Anna Classick Park.

Police Chief Ken Lewis offered a few ideas as to why the pot was in the toilet: “Maybe somebody stashed it. Maybe they were transporting it somewhere illegally and maybe they stashed it for somebody to pick up.” He said that the plants, which were placed inside the porta potty between 6:00 AM and 9:00 AM, were confiscated by police.

A porta potty full of heroin paraphernalia was removed from its site in Don Samuel Torres Park in Rochester, New York, across the street from a public school. While photographing the area in December 2016, Julie Oldfield spotted the items and notified the police.

Mayor Lovely Warren had appealed to the public for assistance in helping to eradicate drug use in the area. It was unclear whether Rochester owned the public toilet in question, but city work crews were ordered to remove city-owned porta potty facilities for the winter. 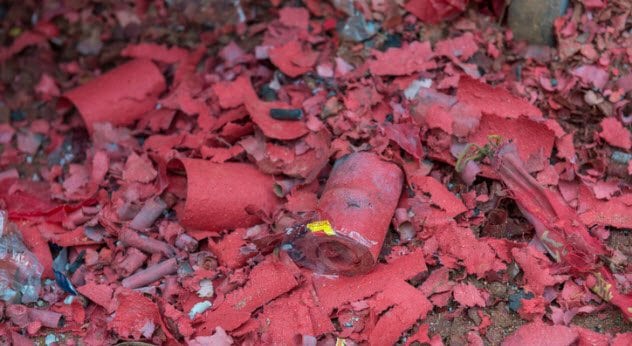 In July 2015, a smoking porta potty that exuded the odor of burned powder alerted passersby to a possible fire inside a public toilet in Ottawa, Canada. Responding firefighters found “the remnants of firework paper,” Ottawa Fire Chief Jeff Carner said.

However, they found no actual fire. Carner said that it was “apparent that someone had discharged some type of firework inside the potty.” No suspects were identified. 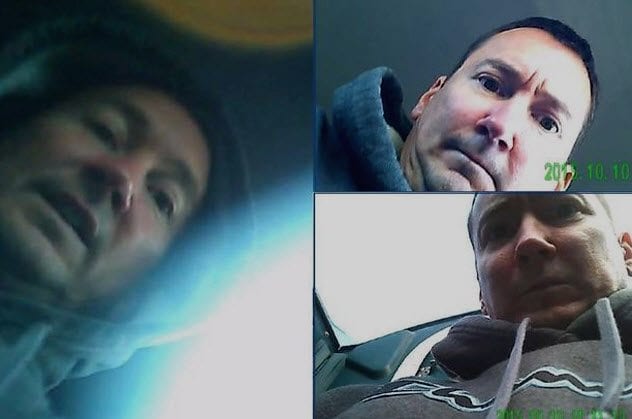 On October 10, 2015, in Ypsilanti Township, Michigan, James Francis Mazor provided evidence of his crimes when he inadvertently took a few selfies as he hid a camera inside a coffee cup left in a public toilet at Wiard’s Orchards and Country Fair.

He was arrested on charges of installing or using a device for eavesdropping and surveilling an unclothed person, both of which are felonies. The porta potty was in place for one day, and the only likeness caught by Mazor’s camera was his own. 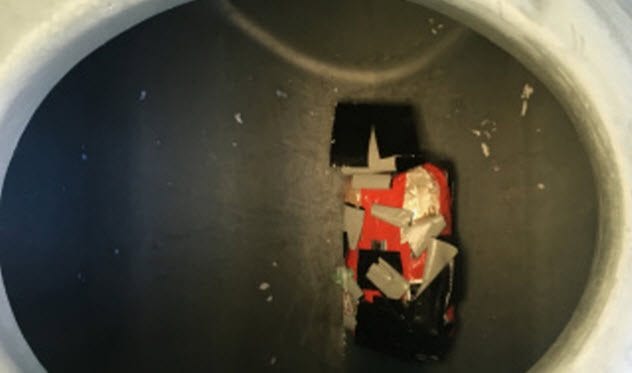 A police robot retrieved a suspicious package reported by an employee who found it while cleaning a porta potty along Canalside waterfront in Buffalo, New York. The 8:00 AM discovery prompted the closing of the park on June 15, 2016, as the hazardous materials (HAZMAT) team and the police bomb squad investigated the incident.

The package contained an unknown liquid, but it was not an explosive. Canalside was reopened at 2:00 PM, in time for a concert planned for the evening.

The HAZMAT team could not identify the package. Police continued to investigate and examined video footage from security cameras in an effort to determine who placed the package in the public restroom. Authorities also want answers to what the package is and what motives the person or persons had in placing it in the public toilet. 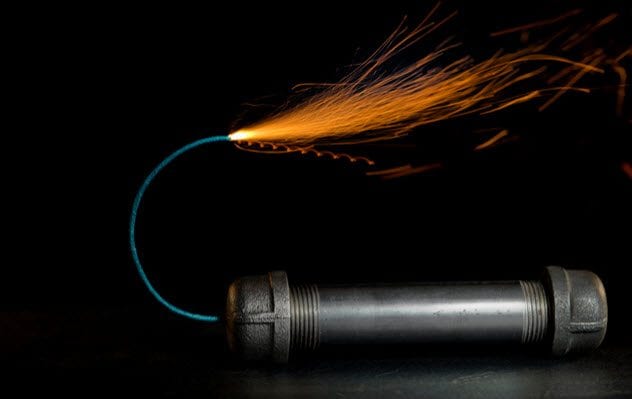 As a precaution, police in Lakewood, Washington, evacuated 50 people from their homes and businesses in July 2013 after a sanitation worker found an explosive in a portable toilet. The explosive, a pipe bomb, was safely destroyed. It had failed to detonate because the fuse had apparently extinguished. 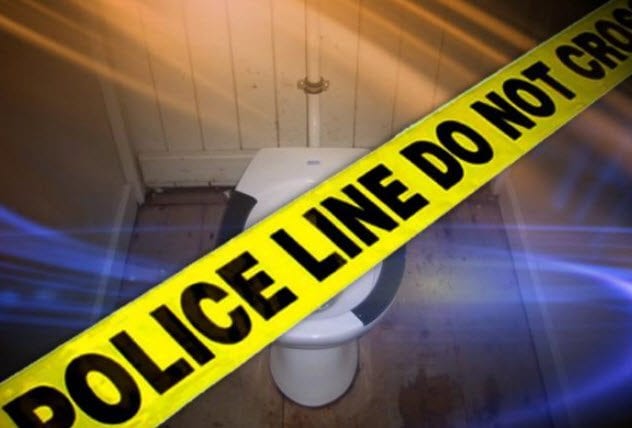 On June 11, 2008, in Weld County, Colorado, the vacuum used by a sand-and-gravel company employee to pump out the company’s porta potty shut down when it encountered a third-trimester fetus discarded in the toilet. The porta potty was one of two at the remote company, which is located just south of the Wyoming state line.

Although it is unknown how long the fetus had been in the toilet, the porta potty had last been cleaned two weeks earlier. Authorities hope that the autopsy determines whether the fetus was stillborn or alive at birth. Regardless, the mother could be charged with crimes, Weld County officials said. 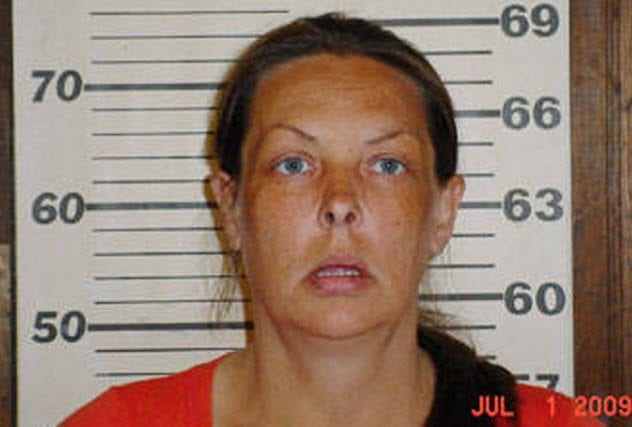 After delivering her baby in a porta potty in Long Wharf Park in Cambridge, Maryland, Candy Vigneri asked a construction worker for a cigarette and smoked it at a picnic table. She warned a male passerby not to use the toilet. “I just had a baby in there,” she told him.

The man called 911 while Vigneri retrieved her newborn from the toilet waste. Covered in a blue antibacterial chemical agent, the newborn was unresponsive when EMT personnel arrived.

Vigneri, who told police she’d had no idea she was pregnant, was arrested on July 1, 2009, on charges of child abuse and reckless endangerment. The baby survived the incident and was assigned to the custody of the county’s social services upon discharge from the hospital. 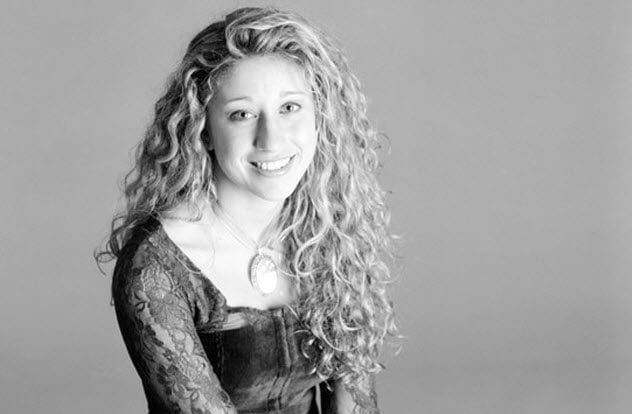 Several dead bodies have been found in porta potties.

A porta potty behind the Chapaton Pumping Station at the Lake St. Clair, Michigan, boat ramp contained a decomposing body. Although the identity of the man and the cause of death remain undetermined, authorities believe that the corpse, discovered on April 20, 2014, might be that of a homeless man who’d used the toilet as a shelter against the frigid winter cold.

In Cincinnati, Paul Brown Stadium beefed up emergency personnel in October 2015 after a construction worker found the corpse of an unidentified male in one of the venue’s porta potty units. Earlier in the week during a Chiefs-Bengals game, a fan collapsed in another public toilet and died at a local hospital.

In May 2007 in Hewitt, Texas, the badly decomposed body of a young woman who’d gone missing a few days earlier was identified as that of Southern Methodist University student Meaghan Bosch, age 21. At first, police believed that she had died of a drug overdose and was placed inside a construction site porta potty.

However, the investigation of her death made police suspect murder and possibly rape by James McDaniel, an ex-con whom she may have dated. Her body was transported 158 kilometers (98 mi) south from Dallas to the Hewitt construction site and left in the porta potty. Only her cell phone, shoes, and purse were taken.