We like to imagine that we learn from our tragedies—that when the worst moment comes, people change their ways and start working together to make things right.

But sometimes, even after the catastrophe is over, the tragedy continues. People get swept up in the havoc and chaos of the moment and do things that make history’s worst moments even worse. And in the aftermath, some of our darkest moments are left with details too bleak to make it into the history books.

10 Tiananmen Massacre
China Billed The Victims For The Bullets 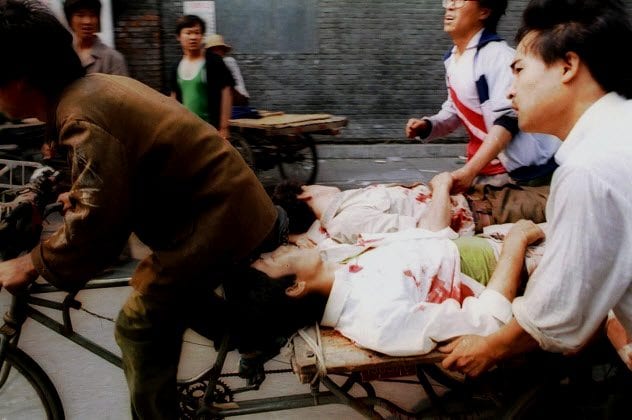 In 1989, after the death of the controversial figure Hu Yaobang, Chinese students marched out to Tiananmen Square and tried to force real change in China. They made a list of demands and led a hunger strike, hoping to bring an end to corruption and forge the first steps toward democracy.

All that came to an end, though, when the army marched in. Soldiers and tanks advanced on Tiananmen Square, right in the heart of Beijing. At least 300 people were gunned down by their own government, with some estimates putting that number as high as 2,700.

Usually, the story ends there—but there’s an extra little detail that makes it that much worse. After the massacre, some sources reported that the government billed the victims’ families for the cost of the bullets. The families of the protesters were charged the equivalent of 27 cents for each bullet used to kill their children.

The Chinese government has never admitted to it. But we know for a fact that they charged other dissidents for the bullets that killed them. There’s a lot of reason to believe that the reports are true that the government did it here, too. 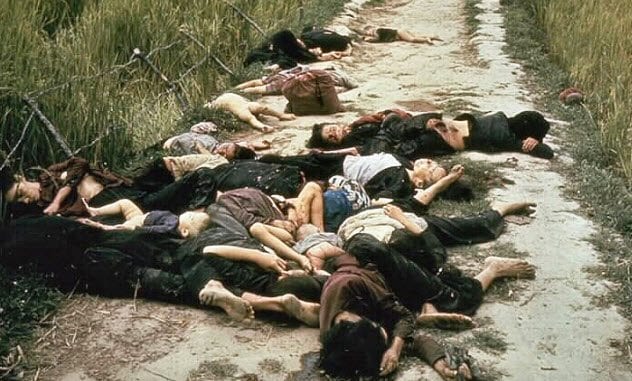 The worst incident in the Vietnam War was the My Lai Massacre. In 1968, American soldiers slaughtered more than 350 unarmed civilians in South Vietnam. They gang-raped women, mutilated children—and met absolutely no consequences.

Of everyone involved, only one soldier was actually charged: William Calley. The courts found Calley guilty of killing 22 innocent people and sentenced him to life in prison.

He never actually served the time, though. Instead, they just put him on house arrest, and he didn’t do that for very long. Calley hung around at home for three years and then got a full presidential pardon from Richard Nixon.

That doesn’t mean that everyone got off easy. One person suffered: Hugh Thompson. He was the man who reported the massacre and testified against the people who did it.

Thompson risked his life trying to save as many Vietnamese people as he could from his own men. He was rewarded for his bravery and heroism with death threats. People left mutilated animals on his porch each morning, and he suffered PTSD for the rest of his life. 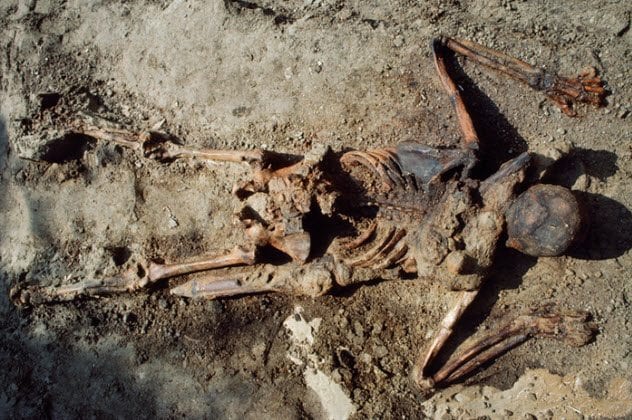 The destruction of Pompeii is one of the most infamous natural disasters in history. An entire city was leveled under a sea of volcanic ash that killed thousands.

Compared to the people in Herculaneum, though, Pompeii got off easy. After the volcano erupted in AD 79, a witness described the scene: “A fearful black cloud, bent by forked and quivering bursts of flames, . . . sank down to the earth and covered the sea.”

That black cloud hit Herculaneum and covered the whole city. It was incredibly hot—over 500 degrees Celsius (932 °F). It burned the tops of buildings off completely and then touched on the people below. At such incredible temperatures, their teeth cracked, their skin burned off, and their bones turned black. Then their heads literally exploded. 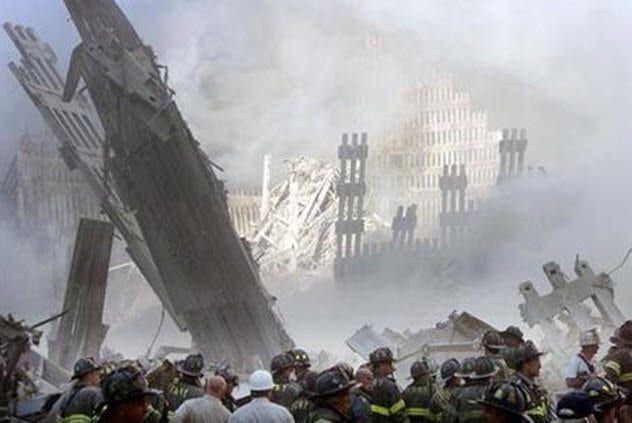 On September 11, 2001, when the planes flew into the twin towers in New York City, 2,996 innocent lives were brought to an end. It was a horrible moment and the worst terrorist attack on US soil. Over the next few years, though, that death toll would become even higher.

People were so afraid of flying after 9/11 that airline use went down by 20 percent. As a result, a lot more people were going greater distances in cars instead—which is a lot more dangerous. In the 12 months following the attacks, an estimated 1,595 more Americans died in car accidents because they were afraid to fly on planes.

Worse, though, was the increase in cancer. The twin towers were built with 400 tons of asbestos, which spread through the city when the towers collapsed. That cloud of asbestos affected an estimated 410,000 people, and cancer in New York City has spiked because of it.

The responders suffered the worst. About 70 percent of the recovery personnel who helped on that day now suffer from lung problems. Approximately 1,400 responders died in the 10 years after the tragedy. Another 1,140 responders have developed cancer since that tragic day. 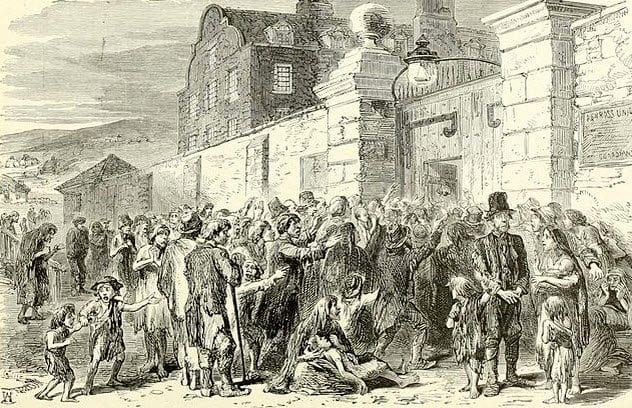 When the people of Ireland started to starve from the Irish Potato Famine, Abdul Medjid Khan, the sultan of the Ottoman Empire, wanted to help. In 1847, he prepared ships full of food and offered to send Ireland £10,000 to help them through the crisis.

British diplomats, though, ordered him not to. British royal protocol, they explained, said that no one should contribute more than Queen Victoria herself. At their order, the sultan reduced his donation to only £1,000 instead.

The Irish were thrilled with his donation anyway. They called the donation an “act of regal munificence” and said, “For the first time, a Mohammedan sovereign, representing multitudinous Islam populations, manifests spontaneously a warm sympathy with a Christian nation.”

The sultan, though, may have revealed a little regret at the compromise when he wrote back, “I would have done all in my power to relieve their wants.”

5 Black Death
The Plague Led To A Jewish Genocide 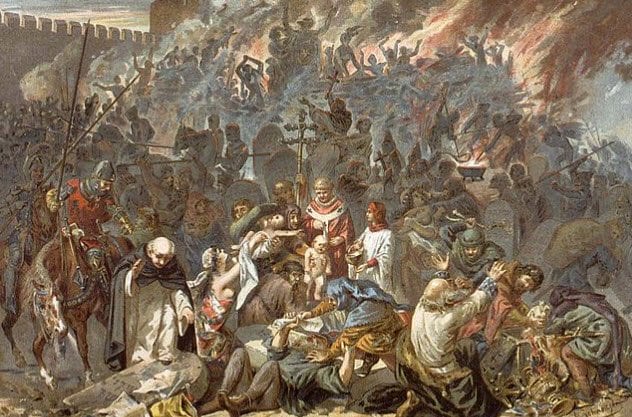 The Black Death wiped out between 75 and 200 million people in the mid-1300s. It killed an estimated one-third of the population of Europe. It was a terrible tragedy—and like most tragedies, Europe dealt with it by blaming the Jews.

Many Europeans believed that the plague was a Jewish conspiracy. According to the story, the Jews had gone around the country poisoning wells to make good Christian people suffer. At first, it was a conspiracy theory. Then the Inquisition rounded up Jewish people and tortured them until they agreed to say they’d done it. Then it was, in the eyes of the people, a full-blown fact.

Mobs rose up and dragged people out into the streets. Jewish babies were pulled from their parents. Whole communities of people were tied to stakes and burned alive. In one case, more than 2,000 people were incinerated at once.

The Black Death, of course, was not a Jewish conspiracy. It affected Jews and Gentiles alike. That didn’t save anyone, though. In the city of Strasbourg, it became law that no Jew should enter the city for 100 years.

4 Hurricane Katrina
A Neighboring Town Turned Away Refugees At Gunpoint 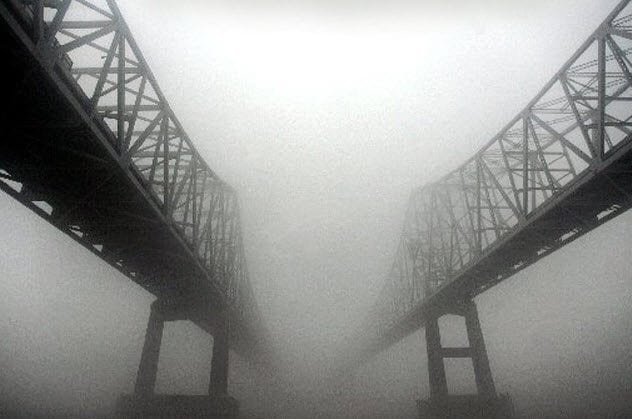 When Hurricane Katrina hit New Orleans in 2005, countless people lost their homes. In a desperate bid for survival, people fled to neighboring towns for safety. The police of New Orleans helped them, pointing the way to the bridge that led to the town of Gretna.

But instead of a welcoming party, these people found a barricade on the bridge. Four police cruisers blocked the lanes, and eight officers were waiting for the refugees with shotguns. They yelled, “We don’t want another Superdome!” and chased the people off. According to some reports, the officers even stole the refugees’ food and water before chasing them away.

Arthur Lawson, the Gretna chief of police, didn’t even deny it. He confirmed that he sealed off the bridge, saying, “There was no place for them to come on our side.”

3 Wounded Knee
20 Soldiers Were Given Medals Of Honor 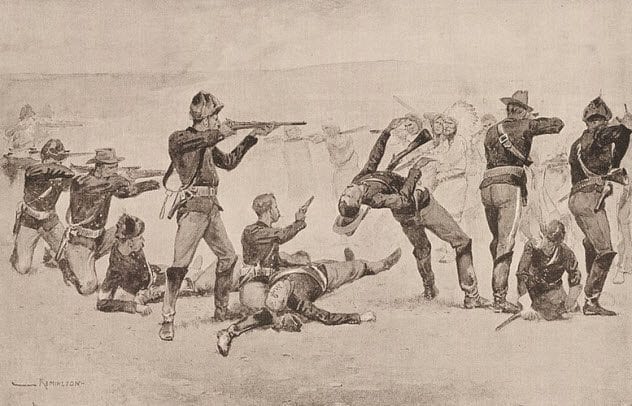 In 1890, US troops attacked an innocent Lakota camp. Most of the people were unarmed, but the troops ran as many down as possible, slaughtering approximately 200 innocent men, women, and children. It was an outrage, and the men who did it were murderers. And for doing it, 20 of them were given Medals of Honor.

More people were given awards for the Wounded Knee Massacre than for most real battles. The government actually wanted to give out 25, but a man named General Miles fought it, calling it “an insult to the memory of the dead.” Even with his protests, they still handed out 20.

One man, Sergeant Toy, was cited “for bravery displayed while shooting hostile Indians.” In the full report, though, it was made clear that he shot Native Americans who were running away. Another man, Lieutenant Garlington, was awarded for blocking off the escape of fleeing victims. He forced them to hide a ravine, and Lieutenant Gresham was awarded for going into that ravine to kill the victims.

At least one Medal of Honor recipient seems to have felt the guilt of what he did. Two years later, Sergeant Loyd killed himself just a few days before the anniversary of the massacre. For his part at Wounded Knee, he had been given the Medal of Honor for “bravery.” 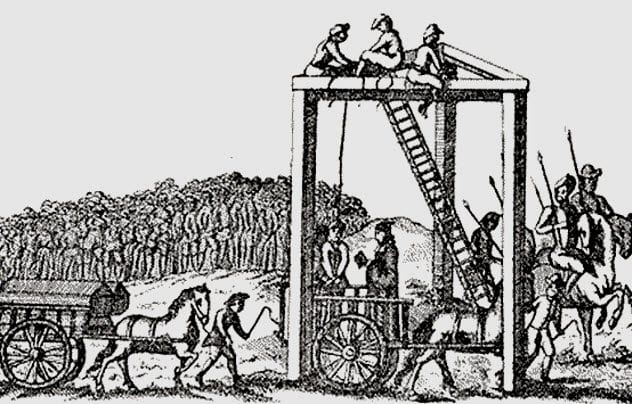 Robert Hubert was described as “not well in the mind” by everyone who knew him. He was very likely mentally handicapped or at least mentally ill. He could barely speak a word of English, and his limbs were constricted by palsy. But despite all that, he was hanged for firebombing London in 1666.

Hubert wasn’t actually in London when the fire happened. He showed up two days later and walked around repeating the word “Yes!” In 1666, that was enough evidence to a form a lynch mob, drag him off the streets, and pull him into the police station.

There, he was interrogated until he said “Yes!” that he’d been paid a shilling by a Frenchman to burn down London. He changed his story every time he told it, but they hanged him anyway.

Fifteen years later, the captain of the ship that took Hubert to London finally stepped forward and told everyone that Hubert wasn’t even in London during the Great Fire. By then, though, it was far too late.

1 The Titanic
They Billed The Families Of The Victims 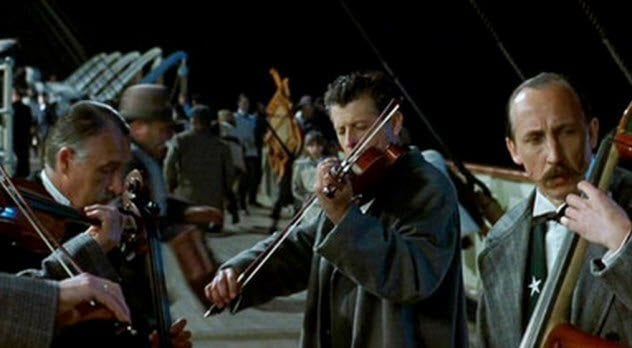 The White Star Line was nothing if not frugal. Due to a clause worked into their contracts, every employee aboard the ship was fired the second that the Titanic began to sink. The company would not, after all, pay wages for employees who were wasting their time drowning.

Afterward, the families of the dead were informed that they would have to pay the freight cost if they wanted their loved ones’ bodies. Most couldn’t afford it, of course, and so today, many of those who died have memorials instead of graves.

Things were far worse for the musicians. The band who heroically played on while the ship sank were completely abandoned. They were registered as independent contractors, which meant that White Star Line legally didn’t have to do anything for them. The other crew members’ families got survivor benefits, but the families of the band didn’t get a penny.

That doesn’t mean they got nothing, though. The families of the band were sent one memento: a bill for the cost of the uniforms.