People tend to remember the big picture of history they learned in school: the famous generals, the important inventions, or the impossible rescues. However, there’s a lot of stuff they don’t teach kids about those events. Maybe its too cruel, or too gross, or just makes historical figures look bad. Every kid was taught about Lincoln’s assassination or Pearl Harbor, but were they taught that… 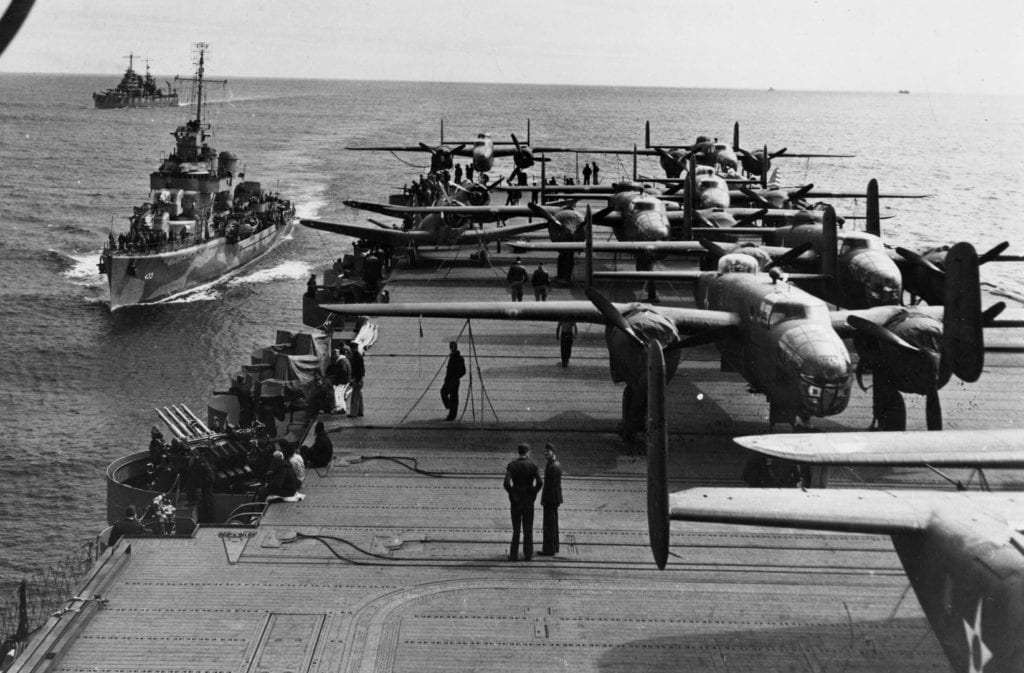 Following the surprise attack on Pearl Harbor, the US launched the infamous Doolittle Raid- a suicidal bombing run targeting the Japanese mainland. The attack may not have caused much physical damage, but was a vital psychological victory. It gave the American public vengeance for Pearl Harbor, and it made the Japanese doubt the safety of the home islands.

Most of the time, this is where the story of the Doolittle raid ends- with an American victory. The Japanese, however, had just lost dozens of civilians. Schools had been hit in the raid, children killed, houses destroyed. The Japanese public were angry, and that anger fell upon the occupied Chinese population. The Japanese immediately set about destroying airfields and infrastructure in coastal China to stop the possibility of another raid. Towns and villages suspecting of helping rescuing bailed pilots were razed to the ground.

Nancheng, a town of 50,000 people, was reduced to little more than “charred earth”. Anyone who had helped the Doolittle raiders was tortured, often being identified by the gifts (nickels, cigarettes, parachutes) given to them by thankful US pilots. An outbreak of cholera made the situation worse, as hospitals were picked clean by the Japanese and refugees were forced to drink dirty water. In total, it is estimated that roughly 250,000 civilians died as a result of the reprisal attacks.[1] 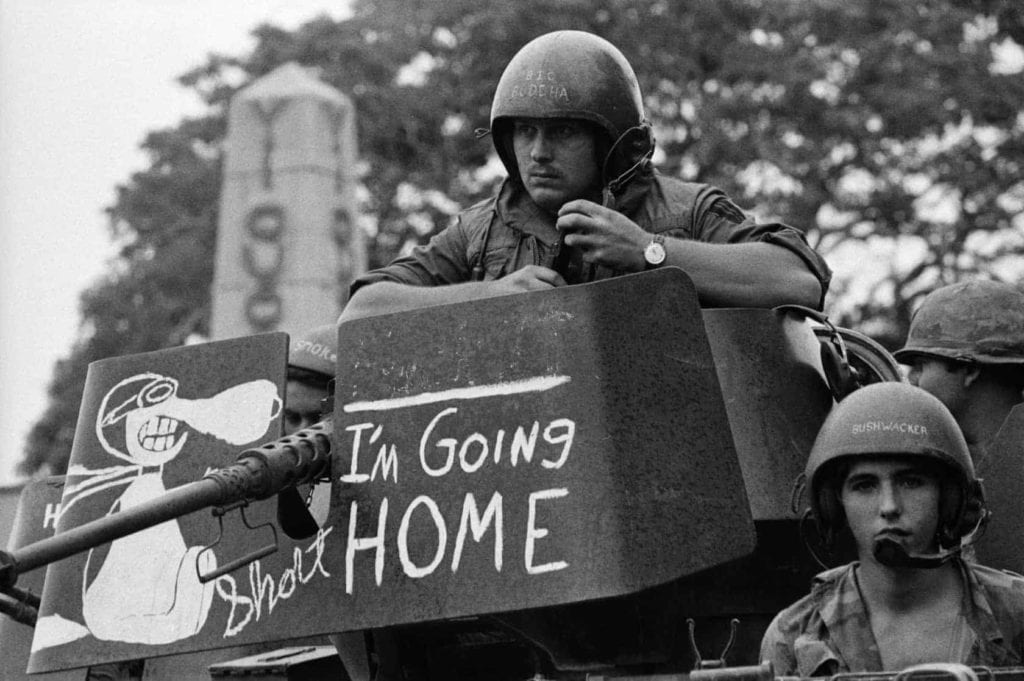 The withdrawal from Vietnam is one of lowest points of American military history, and its made all the worse knowing it caused the deaths of thousands of military service dogs. They were used for a variety of purposes- scouting for ambushes, detecting booby traps and weapon caches, and guarding military bases. Roughly 4000 dogs served in total throughout the war, and are estimated to have saved upwards of 10,000 lives.

However, the end of the war raised the difficult question of what to do with them all. The US was pulling out of Vietnam, and they didn’t have the time to take all their equipment with them. Despite the pleas of many handlers, only around 200 dogs made it back to the US. The rest were either euthanized, or handed over to the South Vietnamese (who likely either let them loose or euthanized them too). One handler, Rick Claggett, offered to pay to have his dog returned to the US, but was told that the dogs were “surplus equipment” and that “If you guys keep jacking around with this thing, you’re gonna be staying here.”[2]

Over twenty years ago, the clocks ticked over from 1999 to 2000 and the world breathed a collective sigh of relief that airplanes weren’t falling out of the sky. The fabled ‘Y2K Bug’ ended up being a hoax, and everything was fine. Except, everything was only fine because of the efforts of countless IT workers across the world working tirelessly to fix the problem. However, what they did to make sure computers wouldn’t break in 2000, caused computers to break NOW, in 2020. Parking meters stopped working in NYC, cash registers seized up in Poland, and even the latest WWE game wouldn’t work if it thought the year was 2020.

But why? In very basic terms, computers stored dates as two numbers, such as 93= 1993. The fear during Y2K was that computers would interpret 00 as 1900 and not 2000. One way to fix that problem was something called “windowing”, which treated all numbers from 00 up to 20 as part of the 21st century. Every system that hasn’t been updated since has reverted back to 1920, causing global havoc.

Even at the time “windowing” was seen as short sighted and widely criticized within the industry, with a 1999 HPC Wire article suggesting “corporate executives and government bureaucrats approved using the method knowing that problems won’t resurface until after they retire or change jobs.”[3]

7 Lincoln’s Rotting Corpse Was Paraded Across The Country 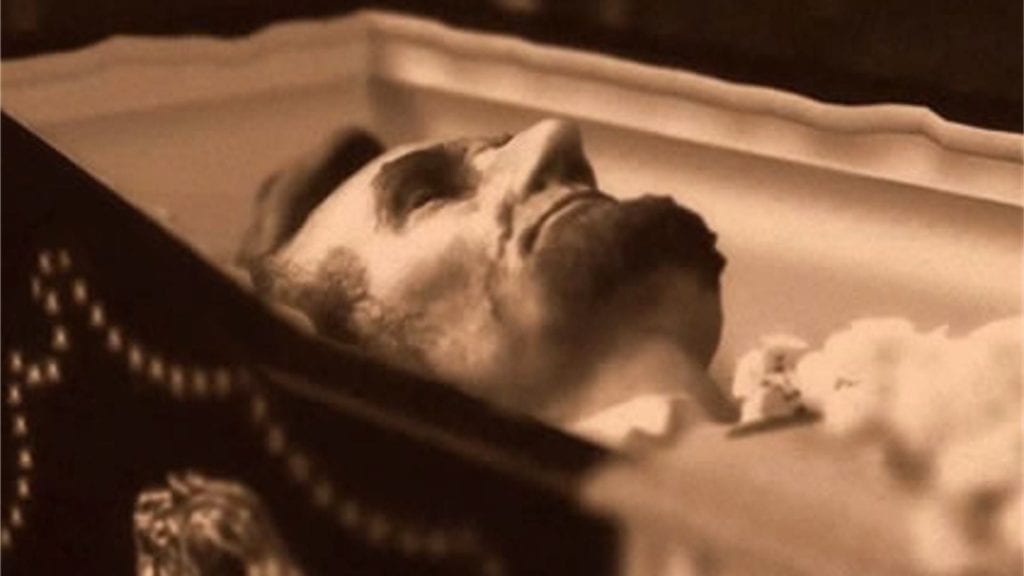 Republican president Abraham Lincoln’s death sparked a period of national mourning, and millions of Americans found a need to express their grief. The answer was a sort of traveling funeral, where Lincoln’s body went on a tour of 180 cities and seven states. The party traveled by train, stopping at every city and setting up Lincoln’s body in a public space for mourners to come and pay respects. Keep in mind that refrigeration wasn’t invented yet.

By the time the train made it to Manhattan, Lincoln’s once proud face had decomposed into a “ghastly shadow”. The New York Times at the time said that “It will not be possible, despite the effection of the embalming, to continue much longer the exhibition, as the constant shaking of the body aided by the exposure to the air, and the increasing of dust, has already undone much of the…workmanship, and it is doubtful if it will be decreed wise to tempt dissolution much further.”[4]

6 The Nuclear Arms Race Killed A Lot of Native Americans 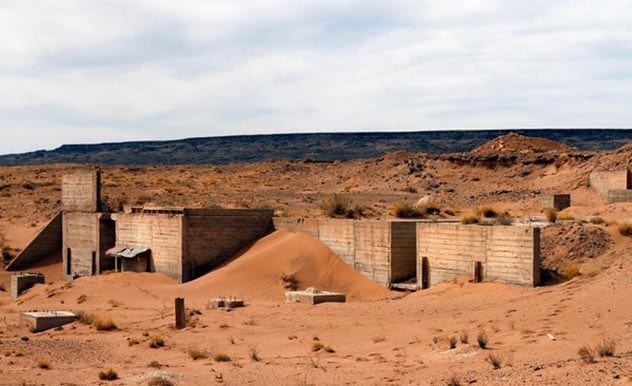 The arms race between the Soviet Union and the USA required significant amounts of uranium. Deposits were discovered on Navajo and Lakota lands, and between 1944 and 1989 3.9 million tons of uranium ore was extracted by Navajo workers. Most of the miners were paid less than minimum wage, and many worked with horses or handpicks. Worse, many didn’t speak English and weren’t taught how radiation could affect them, or that it even existed at all. Ninety Navajo miners were even studied to try and determine the danger of radiation without being informed of the potential risks.

Unsurprisingly, rates of cancer, kidney failure and miscarriage all rose dramatically in the area. An estimated 500-600 of the miners died of lung cancer between 1945 and 1990, and a recent study by the CDC found uranium in the urine of 27% of modern day Navajo. While the US government is now making a concerted effort to clean the abandoned mines and provide clean drinking water, the arms race will continue to kill Native Americans for years to come.[5]

5 Gay Holocaust Victims Were Re-Imprisoned By The Allies 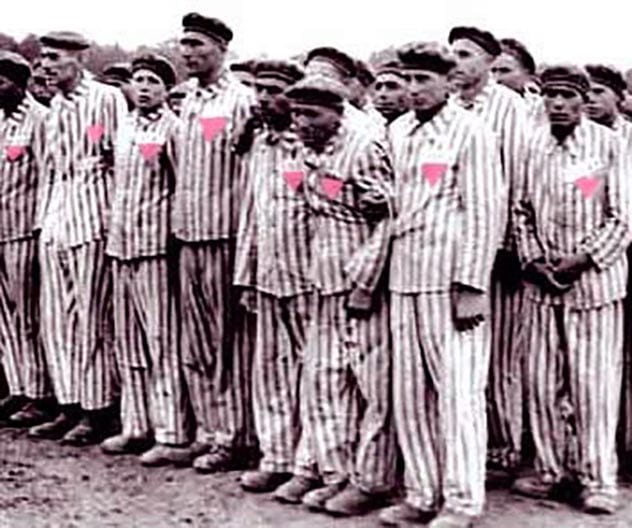 Before 1933, Berlin boasted over 80 gay bars, restaurants, and nightclubs. Within a month of taking power, however, Hitler outlawed LGBT publications and organizations, and famously ransacked the Institute of Sexual Science and destroyed its “degenerate” research. Thousands of gay men were sent to prison or concentration camps, where they suffered a death rate of 60%. Those that survived were starved, tortured, and sometimes used in medical experiments. By the time the Allies liberated the concentration camps, only around 4000 were left.

It quickly became apparent, however, that the Allied powers had little sympathy. Gay men had been imprisoned under Paragraph 175, a part of German criminal code that predated the Nazis. As such, the American authorities treated anyone charged under Paragraph 175 as having been justifiably imprisoned, and the holocaust survivors were forced to complete the remainder of their sentences. To make matters worse, war criminals who experimented on homosexual prisoners were largely allowed to go free. The most notorious, SS Dr Carl Værnet (who castrated and injected hormones into prisoners in an attempt to “cure” them) was allowed to escape to Argentina by British and Danish authorities.[6]

4 The Miracle On The Hudson Lead to Goose Genocide 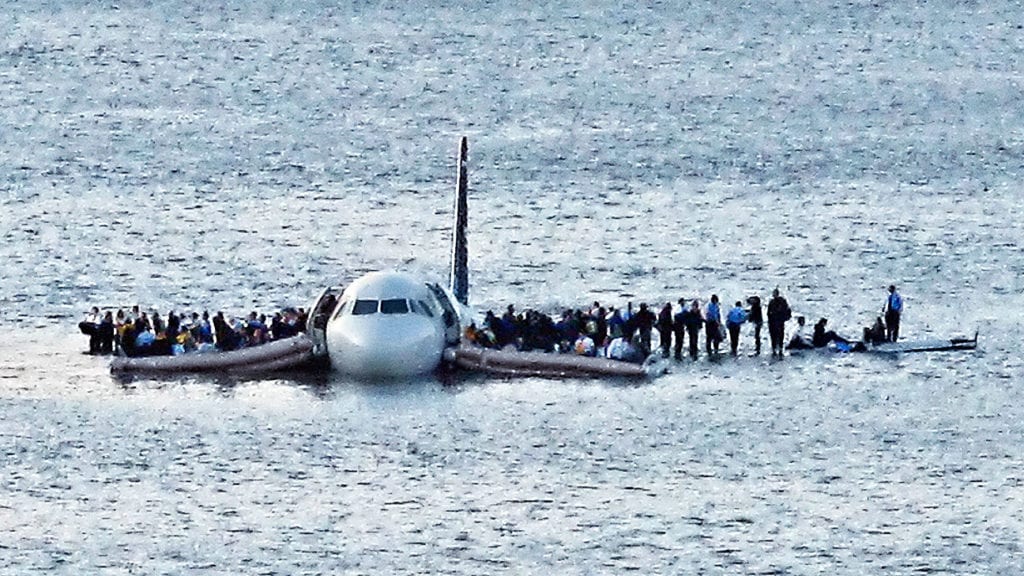 On January 15, 2009 Captain Chesley Sullenberger managed to safely ditch his plane on the Hudson river after an unexpected bird strike, in what became known as the “Miracle on the Hudson”. What isn’t widely known is that the incident lead to the deaths of tens of thousands of wild birds. In an effort to reduce the goose population and avoid future airstrikes, an estimated 1,235 Canada geese were gassed and 1739 eggs destroyed immediately following the incident.

The numbers since have only increased, with an estimated 70,000 birds of all types having been culled by 2017. Perhaps the policy has saved hundreds of lives by preventing bird strike from downing planes… or maybe it was a knee-jerk response that has pointlessly killed tens of thousands of animals for no reason.[7] 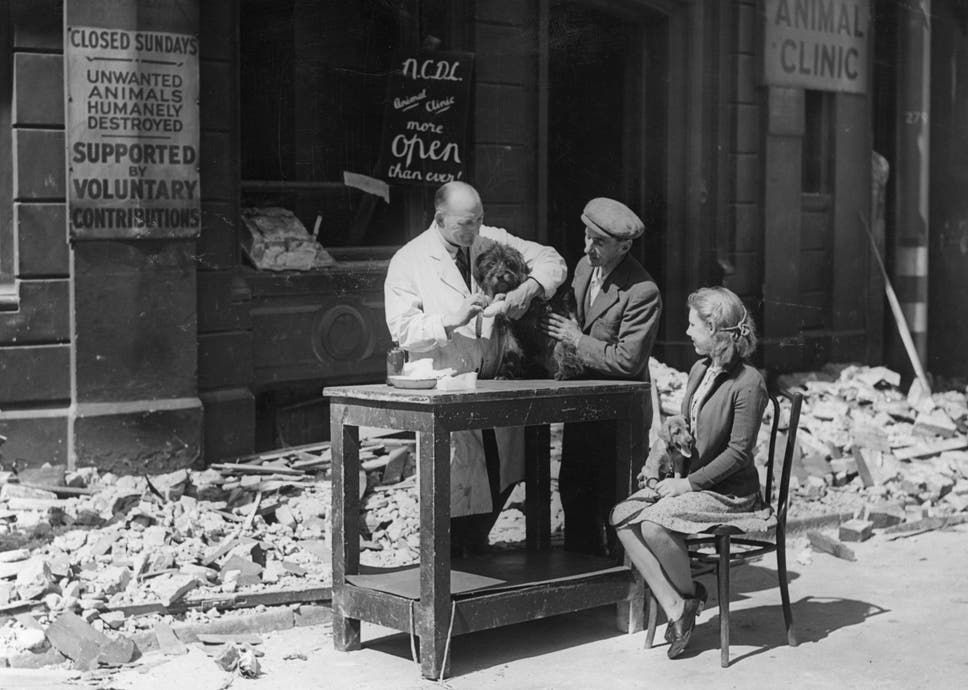 At the start of the Blitz- Nazi Germany’s bombing campaign against British cities- a pamphlet was released to advise pet owners. It suggested sending beloved pets to the countryside or, failing that, having them put down. Rationing meant there wasn’t enough food to go around, and it was seen as more humane to put your dog down than let it starve to death. Many pet owners also worried that their pet would be killed in the bombing, or even that owning a pet would seem extravagant amid ration and the Blitz spirit.

The response was overwhelming. It has been estimated that between 500,000 and 750,000 pets were killed in a single week in London alone. Some owners chose to kill their own pets, but countless vets across the country were swarmed by queues of people holding cats and dogs. The influx was supposedly so high that the bodies were initially just piled in the street. 500,000 animals were buried in a single cemetery. The government itself was mostly against this hysteria, and thankfully hundreds of thousands of pets were safely re-homed in shelters and country homes.[8] 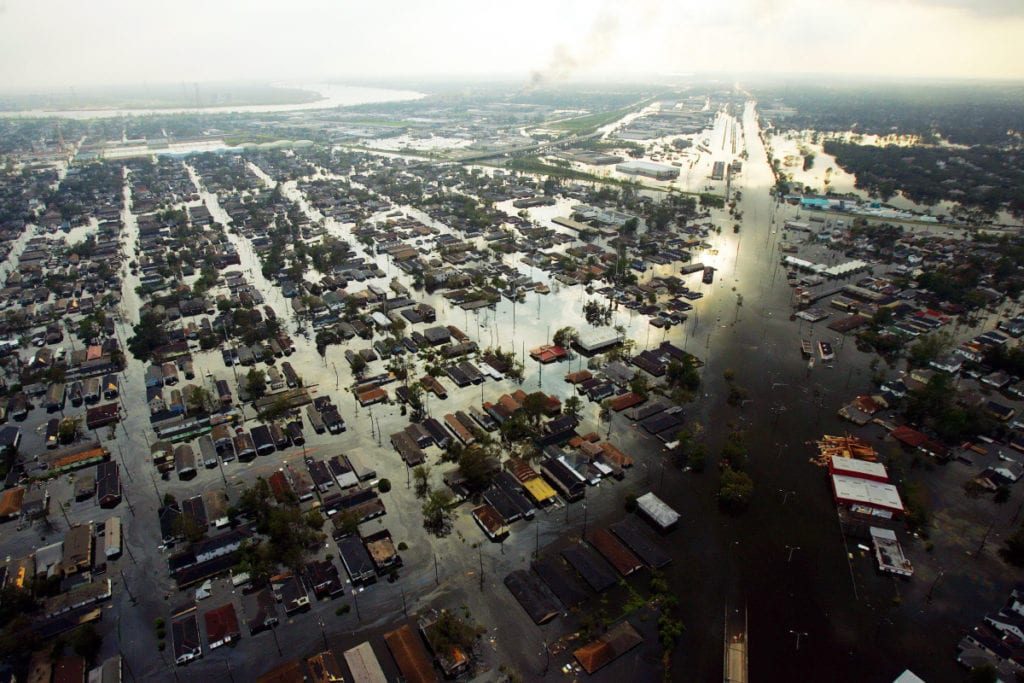 As Hurricane Katrina moved closer to New Orleans, an evacuation order was announced. This order didn’t much help the inmates of Templeman III, part of the Orleans Parish Prison. They were left abandoned in their cells without food or clean water for 4 days. The generators shut off- leaving them in darkness- while the backed up sewage system left inmates trapped in chest-high waste-water. Many of these prisoners were there because of unpaid parking tickets or public drunkenness. They were left to die.

Months later and hundreds of inmates were unaccounted for- either dead, escaped or simply lost in the chaos. Their families had no idea where they were, or even if they were alive.[9]

1 Hawaiians Were Under Martial Law After Pearl Harbour 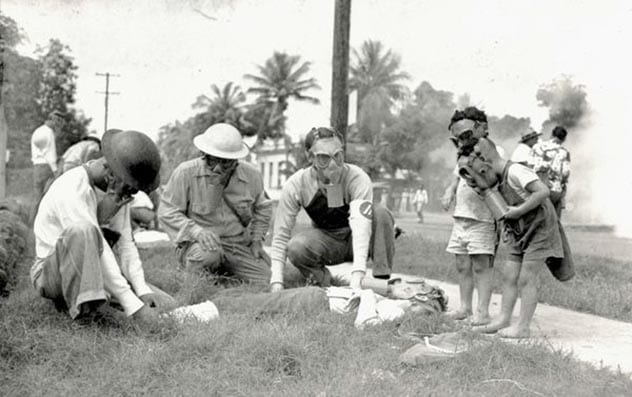 Hours after the attack on Pearl Harbor, Hawaii was placed under martial law by its governor, Joseph Poindexter. Unlike the US mainland, there were simply too many Japanese-Americans to incarcerate them all, so instead every single resident of Hawaii was made to live under military rule.

A curfew was introduced, and citizens were forced to dig makeshift bomb shelters and place barbed wire across the islands. Food became rationed, alcohol was banned, and hotels were occupied by the military. Any resident over the age of six had their fingerprints taken, all mail and news was censored, and banned courts that required witnesses or juries. Anyone who violated any of these new rules would face military tribunal, without appeal. For four years, what is now a US state would essentially live in a military dictatorship.[10]

About The Author: James is a history graduate and pop culture lover. Follow him on Twitter @TheJamesFreeth