Horror stories thrill just about everyone. From monsters to demons and from serial killers to stalkers, nothing gets the blood curdling like a good scary story. But one aspect of horror that churns the stomachs of most people is cannibalism. The thought of eating another human drives fear into nearly everyone.

Throughout history, though, cannibalism wasn’t just a thing from the cinema. It was something that happened in many different ways. One scenario comes straight from the minds of the greatest horror fanatics: The legend of Sawney Bean is one of Scotland’s most disturbing tales and has stood the test of time, having made its mark in history.

Some claim that the story of Sawney Bean is hearsay and myth, while others say that it’s a tale of true horror. Was this legend a dig at the Scots, or was there really a raving, cave-dwelling, incestuous cannibal living in Scotland?

Either way, Sawney Bean is a disturbing figure in the realm of horror.

10 Sawney Bean As A Family Man 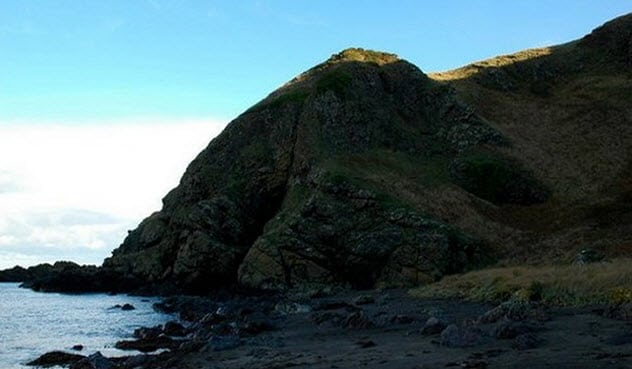 Very little is known about the early years of Alexander “Sawney” Bean. Information about his youth is vague until the time of his marriage. Supposedly, Bean was born in the county of East Lothian on the outskirts of the Scottish city of Edinburgh during the reign of James I of Scotland.

His father was a hard worker—a hedger and ditcher—and raised Sawney to be the same. However, Sawney did not care for work. Early on, he took off into the deserted part of the country.

On his way out of Lothian, Sawney took a wife, who would prove to be as rancid as he was. His wife was named Agnes Douglas. Accused of being a witch in her hometown, she supposedly conjured demons and sacrificed humans.

The lovely couple then set up a modest yet useful home in Bennane Cave, located by Ballantrae in Ayrshire, Scotland. The cave was wonderful for the newlyweds as it contained many side passages and hideaways.

Each day, the cave’s entrance would flood for several hundred meters, isolating the couple. The Sawneys decided to have children and, boy, did they proliferate. Fourteen children were born out of the loving relationship of Sawney and Agnes. But that’s about as lovely as their family life gets.[1]

9 A Family Built On Love And Incest 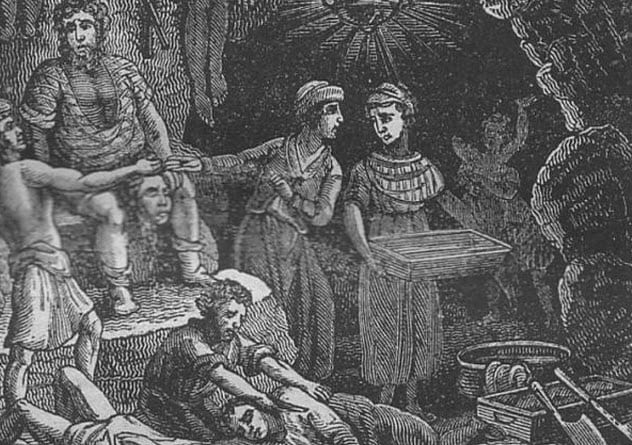 The Sawney parents had 14 children. During this time in 15th-century Scotland, it’s unbelievable that they were able to bear and keep alive that many children. Diseases like typhus, smallpox, and tuberculosis killed many kids. Child mortality rates averaged 14 percent in the first year of life.

The Sawney clan beat the odds and successfully raised eight sons and six daughters. Cave living meant that the Sawneys weren’t out courting, so love found a way. The clan was rampantly incestuous. The Sawney children had sex with each other as well as their parents, producing 18 grandsons and 14 granddaughters.[2]

All these offspring needed to be fed. So what is a derelict, cave-dwelling family of outcasts supposed to do? The first and best solution was obviously cannibalism. 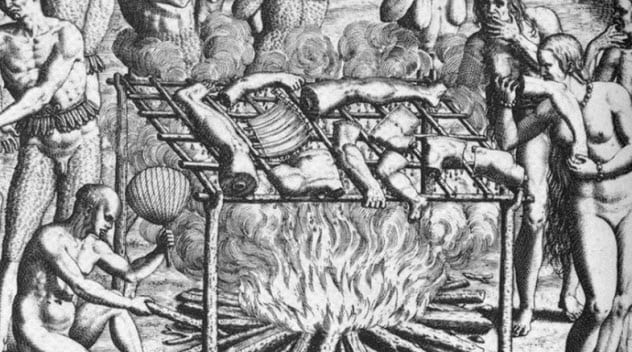 To stay fed, the clan began preying on travelers who passed by the Sawney cave. Sawney himself would ambush and rob them, taking their goods and money. Not wanting to let fresh meat go to waste, Sawney began to drag the bodies home to be butchered and eaten. This tradition of cannibalism lasted 25 years within the clan.

As the clan grew and more bodies were needed to provide sustenance for the 48 family members, an increasing number of people were murdered and eaten. The cannibal cuisine nearly became an art form as generations of Beans learned to save body parts, pickling and salting the human meat for later consumption.

The Beans murdered so many people that there was sometimes too much human meat around for eating. So the many rooms of their cave dwelling became storage facilities stacked full of human limbs and skulls. When the rooms were full and food was too plentiful, the Beans just kept murdering and threw the body parts in the ocean. They would wash up on the shores of local beaches and scare the inhabitants.[3] 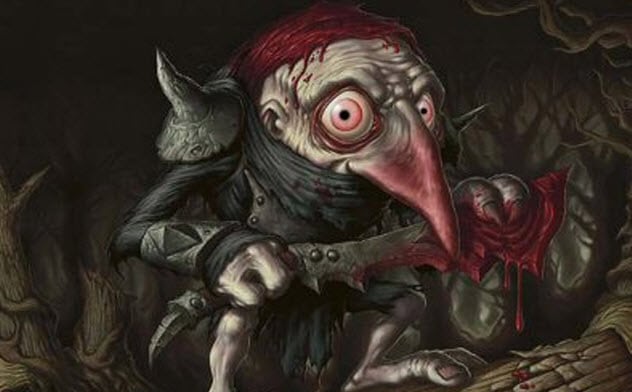 For nearly 25 years, the Bean clan killed and ate nearly 1,000 people. When that many individuals go missing, people notice and rumors start to fly. Many townsfolk in local cities began to turn on each other, accusing their neighbors, friends, and often family members of being murderers.

The stories of what happened to these people ranged from the ordinary to the extraordinary. One of the most common rumors was that innkeepers in the area were robbing and killing all the individuals who had gone missing. This led to many innkeepers just up and leaving the profession to prove their innocence and stay out of the murderous limelight.

On the wilder side of the rumor mill, locals claimed that evil beasts of various sorts were roaming the area villages. The most common monster was the redcap, an evil, goblin-like creature that lived in old castles where blood was said to have been shed.[4]

Redcaps were known for preying on travelers who were passing through their areas, killing them, and then dragging their bodies away to the redcaps’ abodes. Though a monster of lore, the redcap fit all the suspicions of the locals. Still, some had their doubts.

Over the years, the missing persons list continued to grow without anyone knowing that the bodies of those missing people were being eaten by the Bean clan only a cave away. Although mass searches were conducted frequently, the locals were not concerned with what was in the cave because daily flooding made it inaccessible.

6 All Good Things Must End 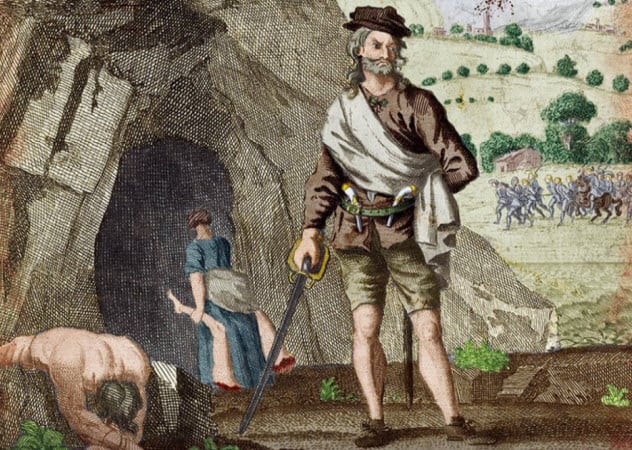 Sawney Bean and his clan of cannibal love children went on a killing spree for nearly 25 years. Like all good things, however, it came to an end. The Sawney army was finally busted thanks to a slew of witnesses and a failed attack.

One fateful night, the Sawney army tried to kill a husband and wife who were on their way back from a local fair. The Sawney women jumped the woman, pulled her from her horse, and then stripped and disemboweled her. As the husband was being attacked by the Sawney men, he watched in horror as his wife was murdered and eaten before his eyes.

Fueled by rage, the man was able to evade his attackers long enough to drive his horse over some of his foes. Luckily, at the apex of the fight, a group of 20–30 fairgoers arrived on the scene. The Beans had been caught in the act, and knowing they had been busted, they returned to their beloved cave.[5]

The testimony of the witnesses along with the desecrated corpse of the wife provided the needed evidence to go after the Bean clan.

5 King James I To The Rescue 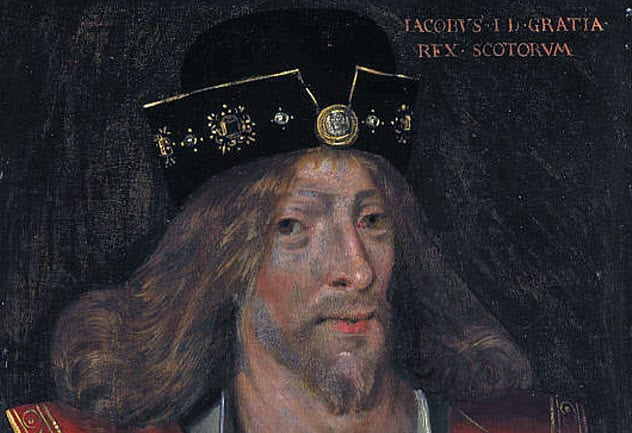 The witnesses to the attack and the husband of the slain woman were quickly brought in to inform the local authorities of the horrors that were seen on that infamous night. The chief magistrate of Glasgow listened to their tale and created the longest missing persons list ever.

Shocked by the attack and the number of missing persons, the magistrate took the list to the top of Scottish parliament, King James I. After gathering information about the infamous clan, King James I was out for revenge. He arrived in the area of the attack with an army of 400 men, bloodhounds, and local volunteers who were ready to end the reign of the clan.

At the time, it was one of the biggest manhunts ever conducted in Scotland. They searched for days until the dogs picked up the scent of decay in the entrance to the cave of the clan. The reign of Bean terror was ending.[6]

4 A Cave Of Horrors 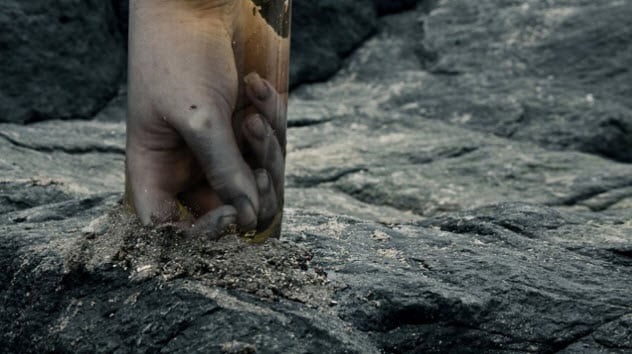 Finally, the clan was apprehended. But nothing could have prepared the searchers for what they would discover within the cave. Beyond the stench of decay and blood, mutilations were found in every nook and cranny.

The limbs of men, women, and children were hung and dried throughout the cave like dried beef. Limbs, fingers, and other pieces of victims were pickled in various corners of the cave. Masses of gold and silver, watches, rings, swords, and pistols were discovered in various locations within the cave.[7]

Clothes from the victims were hung about the cave, covering openings and decorating the walls of the Bean clan’s humble abode in a macabre fashion.

3 The Execution Of A Cannibalistic Dynasty 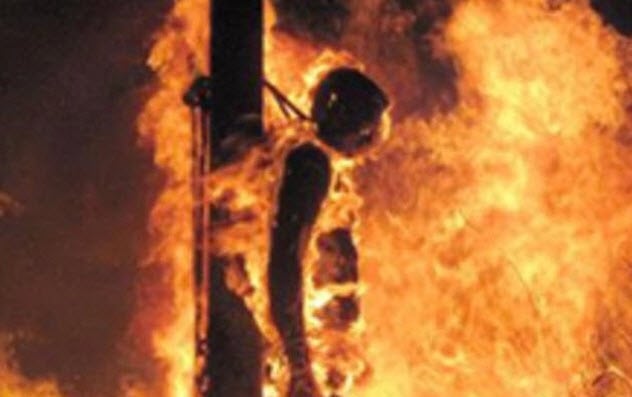 After the raid of their cave, the Bean clan, who had been hiding in the woods, gave up without a fight. Knowing they were out of action, they willingly surrendered with all members of the family accounted for.

Bound in chains, the clan was brought to Edinburgh to be executed. Having been terrorized by the Beans for so long, the public demanded a grand punishment. There was no forgiveness for the clan’s heinous deeds, and all family members were treated as the monsters they were.

The men of the Bean clan were slowly dismembered and disemboweled. This was to emphasize the cruelty of the lives they had lived. Hung on stakes while the men were executed, the women and children were forced to watch as their men were killed. When the executioners were satisfied with their staking, they set the women and children on fire.

During the entire process of execution, none of the Bean clan showed remorse for that they had done. Instead, they heckled and shouted obscenities at their captors. Legend states that, until his final breath, the patriarch of the family, Alexander “Sawney” Bean, continually shouted, “It isn’t over, it will never be over.”[8]

Centuries have passed since the infamous Bean clan ravaged Scotland with their cannibalism, but it doesn’t mean that people have forgotten. Though the story is now part legend and part history, the Beans are still intriguing people as they and their story have become a tourist attraction.

In Edinburgh, you can take a tour of the infamous cave of the Bean clan and discover all the remains of humans and other various leftovers. Known as the Edinburgh Dungeon, this tourist attraction puts visitors right in the Sawney Bean action by using actors, theatrical effects, stages, scenes, and rides to recreate the Sawney Bean experience (as well as many other dark tales of Scotland).[9]

If going to a theatrical Sawney Bean recreation isn’t your thing, you can visit the actual cannibal cave! Though the cave is off the beaten path, adventurous souls can take a treacherous climb down a rock face near the waterline to reach the Bennane Cave and explore the hideout of the notorious family. The place is marked by a sign dedicated to Snib Scott, a recent inhabitant who lived in the cave until 1983.

Sawney’s story has also become a cinematic tale. In 1977, director Wes Craven was seeking to make another movie. He heard the tale of Sawney Bean and adapted it into the horror classic The Hills Have Eyes. Though based on the story in Scotland, Craven changed the location of the tale to the American West.[10]

The Hills Have Eyes was so popular that it was remade in 2006 and was still shocking audiences. In 2013, Sawney: Flesh of Man was released. In this new take on the Sawney clan, a long-lost relative is carrying on the tradition of murder and cannibalism. The film is noted as being “gruesome, visceral, and blackly funny.”

Sawney and his family will continue to intrigue well into the future.

Hi! I’m Theta! I am a full-time librarian with a penchant for writing, animals, and all things obscure.

10 Creepiest Events That Happened At The Cecil Hotel