Humans love color. It affects our moods, attracts our attention, defines our culture. We use it in our national identities, and we’ll spend weeks agonizing over swaths of it for our kitchen. Our visual sense is often our strongest, and color has been an important part of our existence from our very earliest history. Sometimes a color can change the world, for good or for evil, or be associated with some of our greatest events or customs. 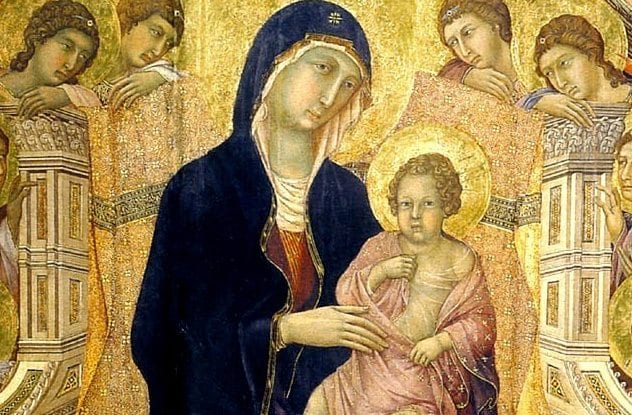 In 431, the Catholic Church assigned color to its various saints, with Mary the mother of Jesus receiving the color of blue. Blue was an expensive and rare dye, perfect for religious use. Over time, Mary’s blue became what we’d recognize today as navy blue, and its association with Mary meant blue took on a meaning of trustworthiness and innocence and also led to its use in police and military uniforms.

With time, that color is now associated with authority (or even authoritarianism) more than it is with Mary or trustworthiness. Because of this, the United Nations specifically adopted a lighter shade of blue when it designed uniforms for its peacekeeping troops. 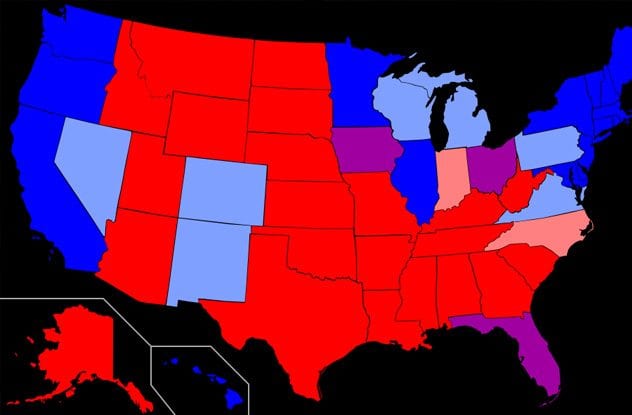 In 1976, the NBC network, which was the first fully colored network, chose a color-coded, illuminated map used to distinguish which states had voted for which party in the presidential race: blue if the states had voted for Republican Gerald Ford and red if for Democrat Jimmy Carter. Eventually, other networks used similar devices, but in the 1980 election, there was no standard. On one channel Reagan voting states would be blue, but on others red.

It wasn’t until the heated 2000 election, when calling a state for either candidate was a long and suspenseful process, that a standard color scheme developed across the board. Red was assigned to Republican candidate George W. Bush and blue to the Democratic candidate Al Gore. “Red states” and “blue states” were born, and those monikers have been used increasingly ever since in the American political landscape. 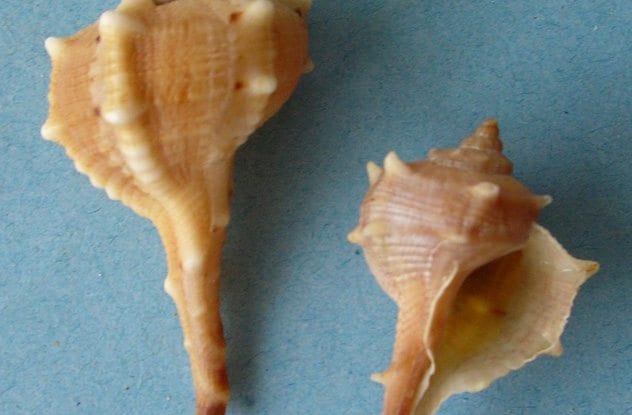 In the Mediterranean, a sea snail, Bolinus brandaris, has a mucus that can be used to produce a purple dye. It would take some 250,000 poor sea snails to make just one ounce of this purple. Yet this was the only source of purple dye in the ancient world, so the color was very expensive. A pound of purple wool cost more than an average year’s wage at the time. It became status symbol for the rich and powerful. Ancient Rome, Egypt, and Persia all associated the color with royalty. Purple was prized greatly in the Byzantine Empire, where rulers wore purple, signed edicts in purple ink, and even their children were considered “born in the purple.”

The association continued to England, where during the reign of Queen Elizabeth I, it was forbidden for anyone not in the immediate royal family to wear the color. This monopoly mostly continued until 1856, when an 18-year-old chemist named William Henry Perkins accidentally created a synthetic purple dye while trying to make an anti-malaria drug. For thousands of years, purple defined governments and status, divine right, and rulership, and now, we can casually throw on a purple scarf before jogging to the corner shop.

7Pink As A Color Of Support 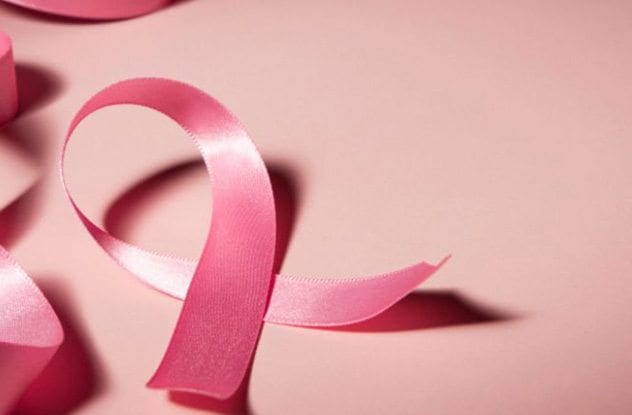 Pink as a symbol for the fight against breast cancer can be traced back to a different color entirely. It began with a yellow ribbon used by Penny Laingen as a symbol of awareness and support for her husband during the Iran hostage crisis in 1979. A decade later, an activist group called Visual AIDS used a red ribbon as a way to raise similar awareness and support. From there, every charity used their own color of ribbon to support different causes, so much so that The New York Times labeled 1992 as the “Year of the Ribbon.”

One important result was the Pink Ribbon as a symbol in raising awareness of and support for those suffering through breast cancer. In many ways, it is the most successful movement of its kind, and its footprint can be seen the world over. Firefighters are wearing pink, the NFL is sporting the color, and even moving trucks and cranes are painted. 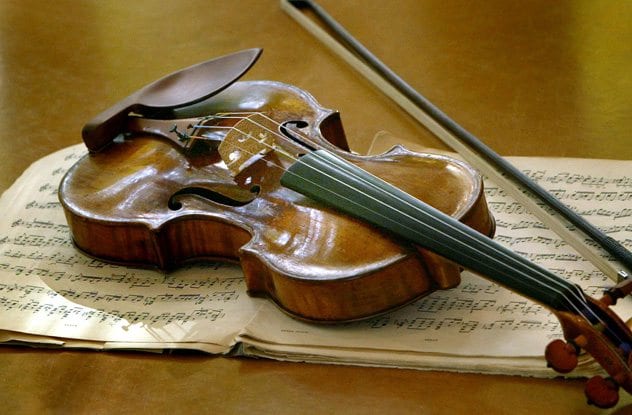 Antonio Stradivari is perhaps the most well-known instrument maker in history. From the late 1600s to the early 1700s, he crafted some of the most beautiful and sought-after instruments ever made. Some of his work sells for tens of millions at auction.

One defining feature of his violins is the brilliant orange varnish used in their construction. While it would be an oversimplification to attribute the quality of a Stradivari violin solely to the varnish, it has long been thought that his unique varnish provided a critical piece to the puzzle. More evidence of his talent lies in the recent discovery that his orange varnish recipe contains common materials, easily available to other instrument makers of the time. Yet none of his peers’ work remains as timeless and unforgettably beautiful as the music made from the orange violins of Stradivari. 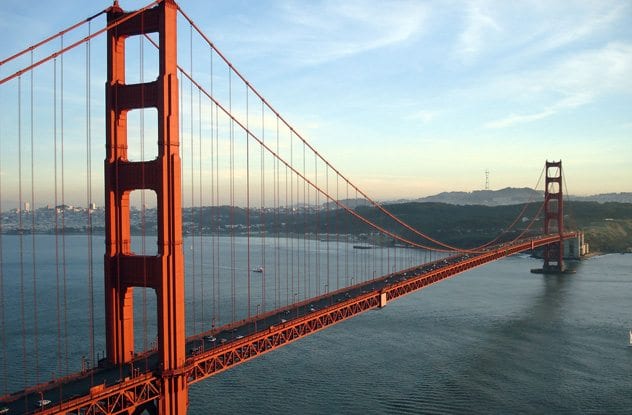 In the 1930s, bridges were traditionally black, gray, or maybe silver to spice things up. But things were changing in San Francisco. The largest suspension bridge ever built was being constructed over the Golden Gate Strait, and the consulting architect on the project Irving Morrow, who designed the bridge’s iconic styling and lighting, also had a thought on the color.

“The Golden Gate Bridge is one of the greatest monuments of all time.” He said, “Its unprecedented size and scale, along with its grace of form and independence of conception, all call for unique and unconventional treatment from every point of view. What has been thus played up in form should not be let down in color.”

Inspired by the red steel primer used on the project, Morrow began extensive color studies with engineers, painters, sculptors, and other architects. The result of this collaboration was the color International Orange. The orange has come to define one of the most recognizable landmarks in the world, as well as the city it resides in. 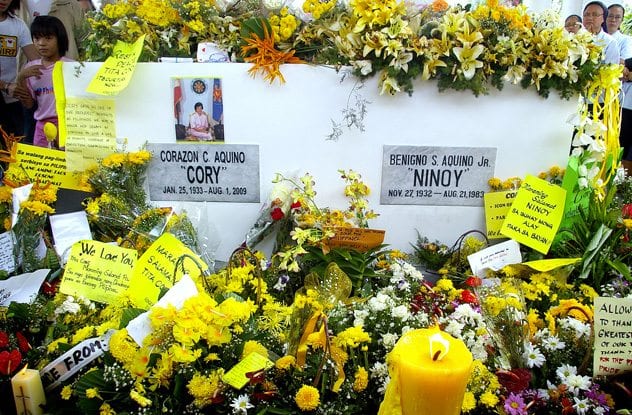 Ferdinand Marcos’s dictatorial rule of the Philippines was resisted by opposition leader Benigno “Ninoy” Aquino, whose favorite color was yellow. When Ninoy Aquino was shot and killed in 1983, his supporters took their cue from the song “Tie a Yellow Ribbon ‘Round the Old Oak Tree” and used yellow ribbons as a memorial and show of support all around the airport where he died.

From then on yellow became the color of the revolution. The opposition united behind Ninoy’s widow Corazon Aquino, who wore a yellow dress while campaigning against Marcos. When warned that this yellow dress made her an easy target, she replied, “When Ninoy died, I lost my fear.” From there, yellow began appearing in everything associated with the revolution: T-shirts, banners, flags, caps, and even toilet paper sported the common color.

More and more elements of the military and government backed Aquino, and the entire movement culminated in a three-day rally of some two million participants. Eventually, support for Aquino reached a point where Marcos was forced to cede control of the government and leave the country. Aquino was elected president in 1986. During the entire revolution, not a single shot was fired. Though formally called the People’s Party Revolution, another popular name is the Yellow Revolution. 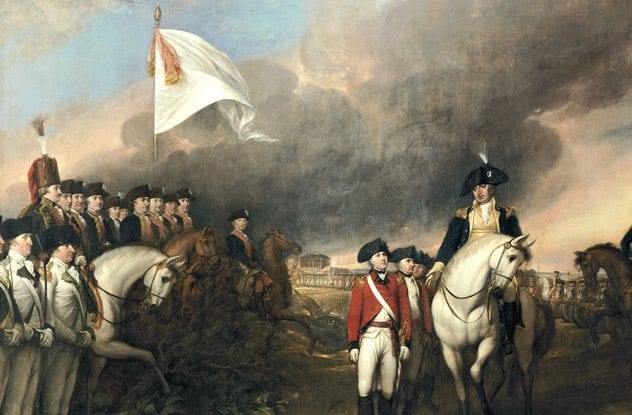 In the Second Punic War between the Roman and Carthaginian Empires, a Carthaginian ship was reported to display white wool and olive branches to signal its wish to surrender. This practice continued into 69, where a white banner was again used to broadcast a wish to parley in the Second Battle of Cremona. Soon, the white flag became well established in the Western world as a sign of surrender. Interestingly, the practice also arose independent of the West in the first to third century in China during the Eastern Han Dynasty.

Though often used as a sign of surrender, the white flag has also been used to indicate non-combatants, such as medieval Heralds, who carried white standards to make sure they weren’t mistaken for soldiers. The white flag has become so predominate in the world stage that many treaties and countries have forbade its misuse and defined such abuse as a war crime. 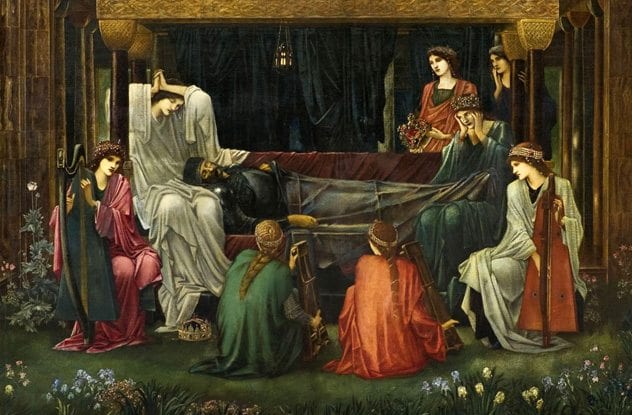 Masterpieces of art such as The Last Sleep of Arthur in Avalon by Edward Burne-Jones and Martin Drolling’s L’interieur d’une cuisine share a disturbing fact in common. Both were painted using dead people.

By the 16th century, the export and misuse of mummies had become a thriving business. The corpses were used as attractions or ground into powder for medicine or even as paint. “Mummy Brown” was used for centuries and was still produced even as recently as 1964. As a paint, it received mixed reviews. Some claimed, “it flows from the brush with a delightful freedom and evenness” and provides “thin films that are extremely lovely and enjoyable,” while others held the practice to be distasteful.

Those in disgust seemed to be the majority. When Edward Burne-Jones learned of the grisly origin of his paint, his widow reported, “he left us at once, hastened to the studio, and returning with the only tube he had, insisted on our giving it decent burial there and then. So a hole was bored in the green grass at our feet, and we all watched it put safely in, and the spot was marked by one of the girls planting a daisy root above it.” 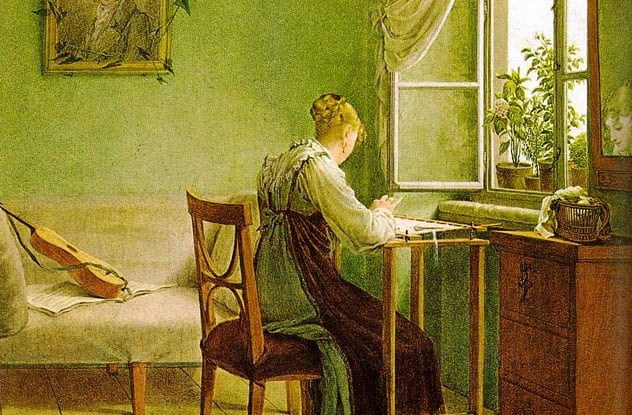 The cause of Napoleon’s death has been hotly debated. Was it a stomach ulcer? Arsenic exposure? Evidence for the latter can be found when studying samples of the wallpaper of Longwood, Napoleon’s prison home while in exile.

In the 18th century, a new pigment of green was devised and named Scheele’s Green, after its creator. This pigment made heavy use of arsenic and was present in the wallpaper Napoleon was surrounded by in his final years. Both samples of the wallpaper and Napoleon’s own hair have been tested and found to contain arsenic. In a high temperature, damp room, the wallpaper could well release enough arsenic to account for what was found in Napoleon’s hair, but we’ll never say for sure if it was the color green that killed him.