Venice, often known as “the floating city,” was founded in the fifth century AD. Built after the fall of the Roman Empire, the city became the merchant capital of the world.

Venice is completely surrounded by water. People use boats as the main form of transport as the city is made up of many small islands. Everywhere you look, there are breathtaking buildings. But you have to look closer to uncover the ancient secrets that are etched into the walls and foundations of the floating city.

Venice is notorious for its masked balls and elegant parades but less known for the mysteries, legends, and inexplicable events that have taken place there. These mysteries and legends are unsolved to this day and may never find a suitable conclusion.

10 The Ghost Of Palazzo Grassi 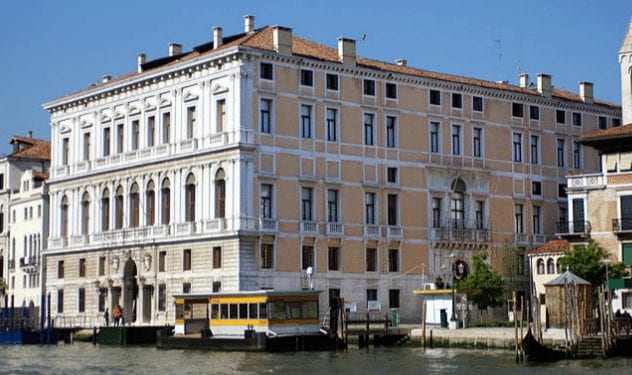 Along Venice’s Grand Canal lie a number of large palaces, including the Palazzo Grassi. Many say that the palace is haunted by the ghost of a young girl who threw herself (or perhaps was thrown) from the balcony after being beaten. Some inhabitants of the palace say that they have heard someone calling them by name or whispering inaudible words in their ear.

Throughout the restoration of the building in the 1980s, something extremely peculiar happened. A watchman was walking through the halls when he heard a voice calling him and telling him to stop.

The man could not find any evidence that anyone else had been near him. But he did notice that he had heard the voice just over 0.3 meters (1 ft) away from a hole left in the floor by the workers. If not for the voice, he would have likely died. 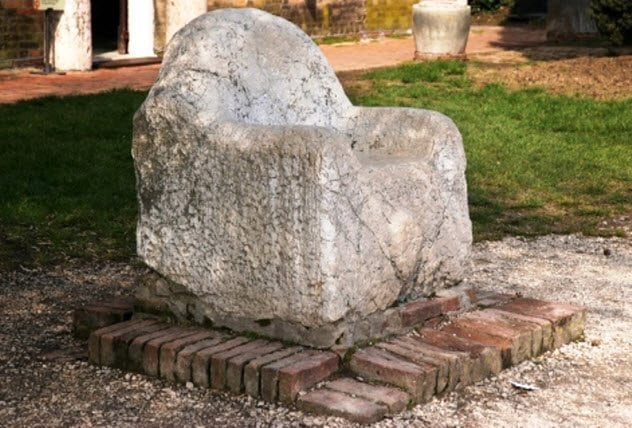 On the Venetian island of Torcello sits a stone chair, believed to be the throne of Attila, the king of the Huns. During their invasion of Venice in the fifth century, the Huns arrived on Torcello, killing a large number of the inhabitants. Attila had the throne placed in front of the cathedral as a symbol of power and to display his allegiance to God.

Whether the throne actually belonged to Attila is still a mystery as many reports claim that the Huns never made it past Northeast Italy. However, the throne certainly belonged to someone in a position of power. Many ancient scripts contain diagrams of the throne and a figure sitting prominently in it.

8 The Statue Of The Woman Who Saw Death 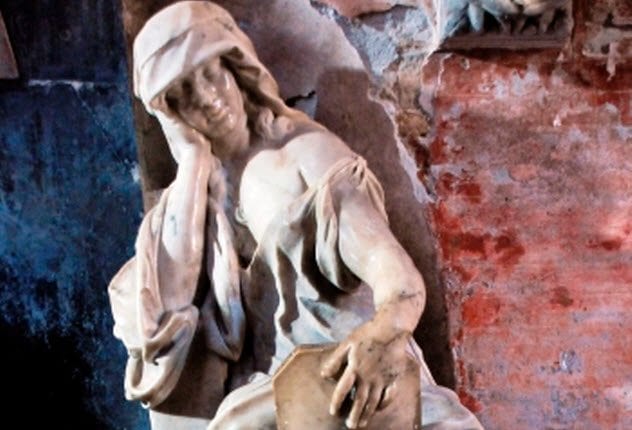 In the Castello District in Venice, a church was built by Jacopo Tiepolo near the end of the 1200s. Considered to be the most recognized church in Venice, it has become the final resting place of many famous Venetians.

Attached to the church is an incredible legend that centers around the sculpture of a sad-looking woman. According to the legend, the beautiful woman looked in the mirror one day to see a haggard old lady near her death. She realized that it was her fate and died instantly from shock.

This remains an ancient Venetian mystery as no one has been able to confirm the origin of the statue.

7 The Ghost Of Marco Polo’s Wife 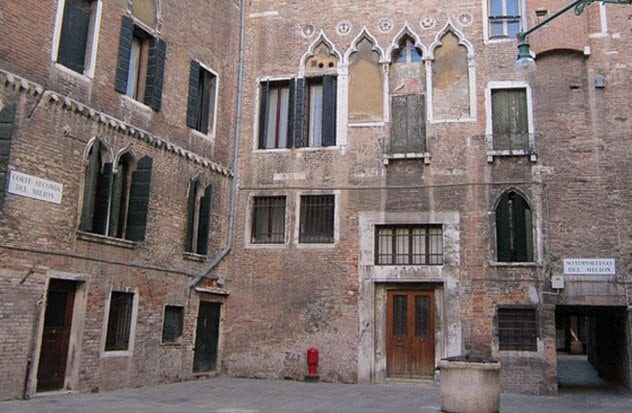 During his stay in China, the well-known Venetian merchant Marco Polo fell in love with the daughter of a great emperor and married her. He took her back to Venice with him. However, she never felt at home in the city.

When Marco Polo was captured in battle, his sisters-in-law told his wife that he was dead. She could not cope with the grief and threw herself into the canal. People say that they have witnessed her ghost while walking past the site of Polo’s house at night.

While excavating the foundations of the Malibran Theater (on the site of the old house), the remains of an Asian woman were found, buried with items of Chinese origin. It is still unclear whether this was Polo’s wife. 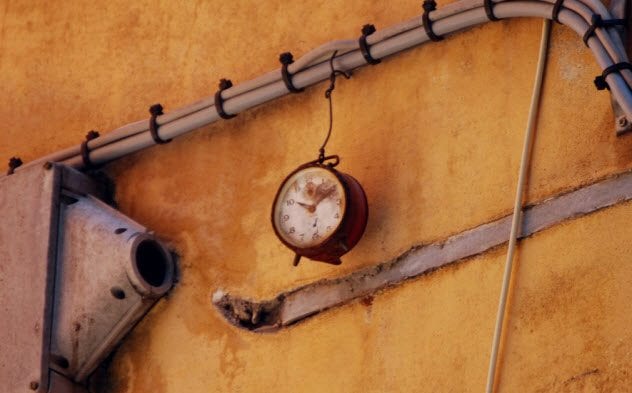 Near the Accademia Museum in the Dorsoduro District, there is something rather odd on the side of an old building. It is nothing but a centuries-old alarm clock. This has raised hundreds of theories as to why it is there, but not one has been agreed on.

The legend goes that an old witch used the clock to mark the time that invoices were due. When she died, no one wanted to live in the house due to their fear of the witch. A nearby merchant asked some workers to put an old alarm clock on the supposedly haunted building as a joke.

When the clock was taken down a few years later, strange things started happening, such as visions and strange sounds during the night. As soon as the clock was put back up, everything went back to normal.

Years later, the clock was taken down again. The odd happenings resumed, including unexplained disappearances of objects and accidents happening around the site. The clock was once again replaced, and these strange events ceased.

The clock was never taken down again. Now it can be found on the side of a house on the Calle della Toletta street in Venice.

5 The Sirens Of The Venice Lagoon 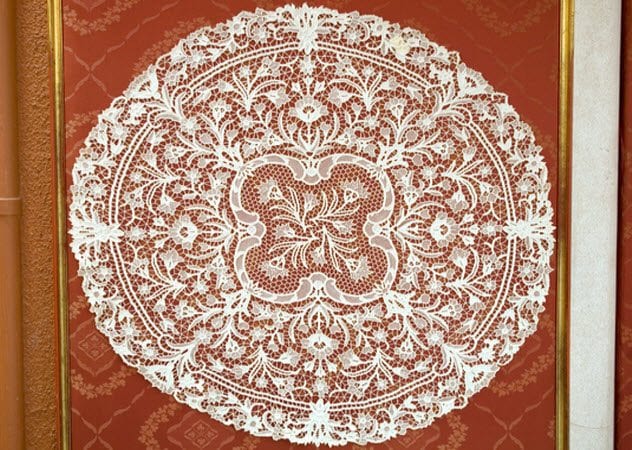 The island of Burano in Venice is made up of small, colorful houses and sandy canal banks. It is a beautiful part of Venice and holds the legend of the Sirens.

According to legend, a man was fishing in the canals when he was approached by a group of Sirens who tried to seduce him. However, he was so in love with his soon-to-be bride that he refused them. Impressed by this, the Sirens gave him a gift of beautiful lace that he gave to his wife on their wedding day.

The wife is said to have remade the lace multiple times, ultimately creating the famous Venice lace that we know today. If the story is true and the man was really visited by Sirens, is it possible that they still swim the waters of Venice, preying on young men to seduce? We may never know. 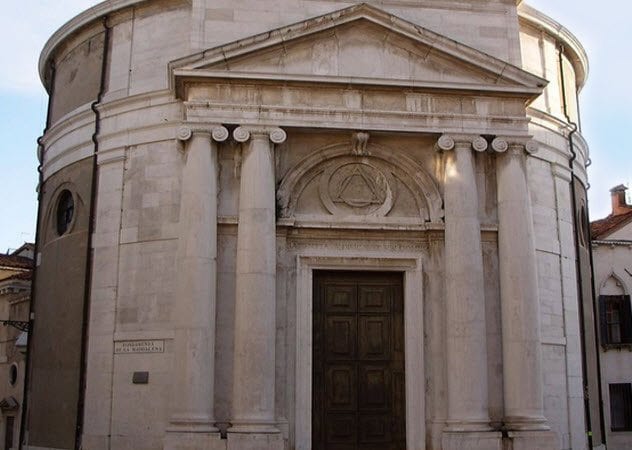 In the middle of the 18th century, Venice was a huge hub for Freemasonry. The members included many famous people such as the great explorer Giacomo Casanova. The Freemason fraternity was so rich and powerful that they built a church following their beliefs. This was the church of Saint Mary Magdalene in Cannaregio.

A symbol of a pyramid with an eye in the center is etched above the door of the church. Beneath the symbol is the inscription: SAPIENTIA EDIFICAVIT SIBI DOMUM. This is a reference to the cult of divine knowledge, the base of Freemason ideologies.

Many Freemasons are buried inside the church. All their tombs are inscribed with the compass and line symbol of the Masons, defining themselves as builders.

3 The Casino Of The Spirits 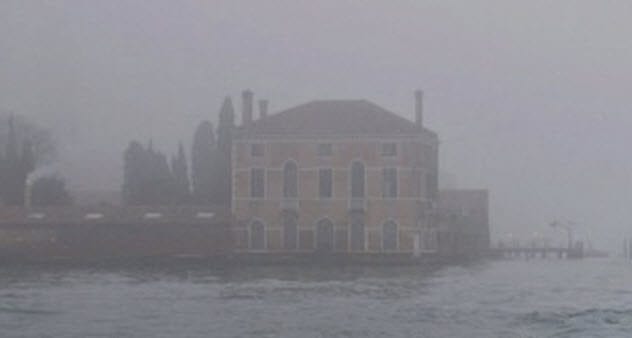 This casino resides along the Fondamenta Gasparo Contarini canal in Cannaregio. It belonged to famous cardinal and patron Joseph Contarini in the 16th century.

The Casino of the Spirits got its name because it is known as a gathering place for the restless spirits of the city. A famous ghost often appears in the rooms of the building at night while many visitors are there. It is thought to be the ghost of the famous painter Luzzo because he committed suicide in the building.

The building is extremely isolated, and the sea emits an eerie sound at night. The casino is now used as an institute for two religious groups, but the garden is still open to visitors.

A frightening tale is often told about the site. On a dark night, if you listen closely, you can hear the screams of a man in another room for a number of minutes. Then the screams die down, and all that can be heard is the sound of the sea against the side of the canal. 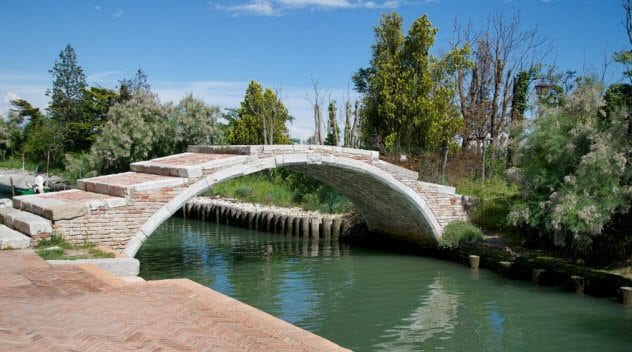 On the remote Venetian island of Torcello is a stone bridge that crosses a canal. It has come to bear an odd name, “The Devil’s Bridge.”

It is thought that a young lady fell in love with an Austrian soldier during the Austrian reign in Venice. He was killed by her family as they did not approve of the relationship.

The girl was so struck with grief that she got help from a witch. They met on the bridge, and the witch brought the soldier back to life. In return, every Christmas Eve for seven years, the young girl had to bring the witch a baby who had recently died. It is said that the Devil himself comes to the bridge every Christmas Eve looking for the souls of deceased babies.

This is a mystery because a number of people believed that they saw a ghostly apparition gliding back and forth on the bridge on Christmas Eve in the late 1990s.

1 The Mask To Scare The Devil 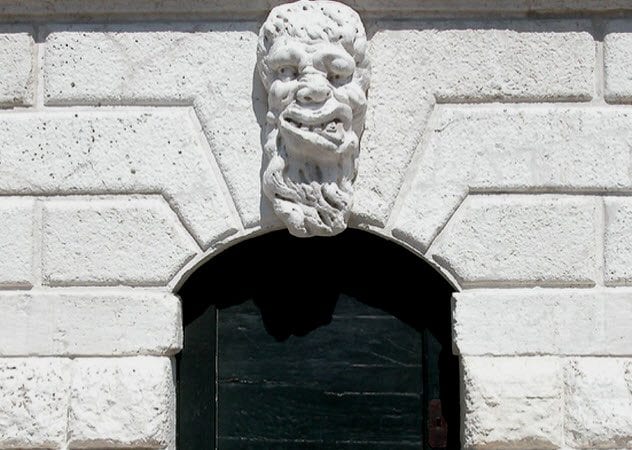 Most churches in Venice have a bell tower on the side. When the bell was rung, it signified the beginning or the end of the working day.

Often at an angle, a face was sculpted in the doors of these bell towers. But sometimes, more grotesque beings were used to “ward off the Devil” who wanted to enter and ring the bell.

The most grotesque mask is at the church of Santa Maria Formosa Castello. The tower is over 40 meters (130 ft) high and was reconstructed in 1678. The face was designed by priest Federico Zucconi and was very famous at the time of its construction.

A series of mysteries surround the mask. Some say that it howls at night when the Devil is getting near. Others say that it was once a demon that was turned to stone and molded into the side of the church to scare away other passing demons. Many locals have said that they have seen the eyes of the mask turning, but that is possibly the effect of late-night Venetian wine.

I’m Joe, a lover of knowledge and the unexplained. I am the author of the popular truck driver stories on Reddit’s r/nosleep. My priority is to deliver quality content in my writing and keep the reader interested. There is nothing worse than reading a boring article.