Space is so mind-bogglingly vast that it can become easy to see the solar system as the astronomical equivalent of our backyards: ordinary, close at hand, and containing very few black holes.

However, the truth is quite different. There are many bizarre things within the orbit of our Sun that astronomers have yet to figure out. Here are 10 of the strangest unexplained phenomena in our solar system. 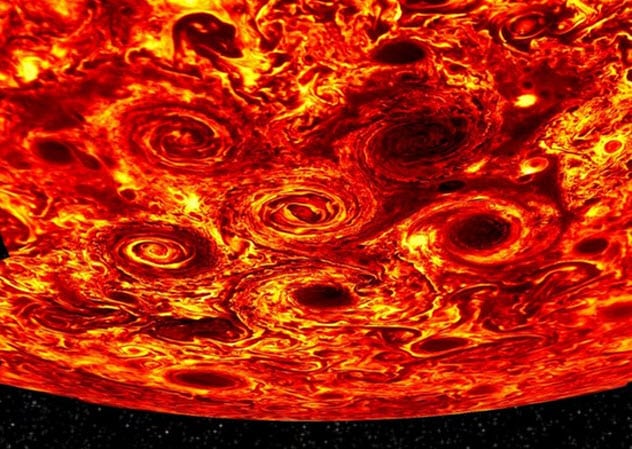 Cyclones exist on most planets that have an atmosphere and moisture beneath their clouds–including our very own Earth. These storms come by many names on this planet. Depending on where you live, you may be better acquainted with them as “hurricanes” or “typhoons.” Generally speaking, the cyclones on Earth have a fairly rounded shape with an “eye” in the center.

But that isn’t true for the storms on some gas giants. A strange phenomenon about the cyclones on Jupiter was recently discovered: These storms often take on hexagonal shapes, forming a honeycomb-like structure around both of the gas giant’s poles.[1]

Jupiter isn’t the only gas giant whose storms seem to favor a six-sided, angular shape. In 1988, scientists discovered a giant hexagonal cyclone on one of Saturn’s poles.

The beehive-like pattern on Jupiter seems unique, however. Theories have been proposed as to what causes these oddly angular storms. But for the most part, they remain a mystery. 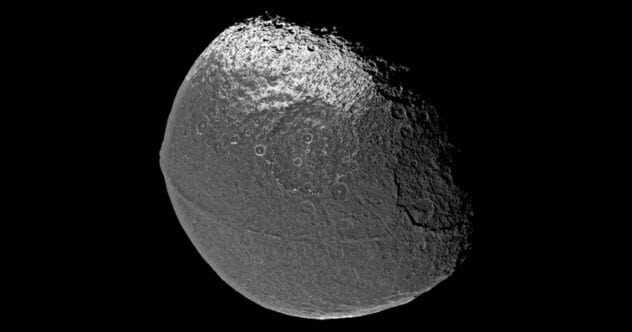 Imagine that instead of having its highest mountain peaks scattered on different parts of its surface, the Earth had all its tallest mountains form one long, continuous chain across the equator. This is essentially what happened on Iapetus. This long mountain ridge has a peak altitude of 20 kilometers (12 mi), which is more than twice that of Mount Everest. This chain of mountains also gives the moon its distinct and rather baffling “walnut” shape.

Scientists still aren’t sure why this ridge exists. Some think that it may have been the remains of a ring (a bit like Saturn’s own rings) that eventually came crashing down to the surface. Others think that it may be made out of debris from a former moon.[2]

What is clear, though, is that between this and Iapetus’s bizarre half-dark, half-light coloration (that also was a mystery until not too long ago), this moon may well be one of the strangest objects in the solar system. 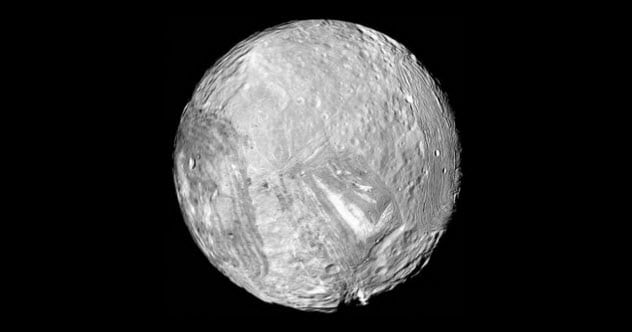 One of the oddest moons in the solar system is the misshapen Miranda that orbits Uranus. Miranda has a very bumpy surface, to put it lightly. The moon is full of craters and deep canyons, giving it the look of a “patchwork” moon.

There are a few theories about why Miranda resembles something that a mad scientist might have hastily sewn together. One is that Miranda may have suffered a series of calamitous impacts, leaving it permanently scarred. Uranus itself was most likely faced with several collisions at one point (resulting in its sideways orbit), so this theory seems thematically fitting.[3]

Another theory is that the force of Uranus’s gravity caused Miranda to have unusual volcanic activity, giving an otherwise smooth-surfaced moon its odd bumpy shape.

7 Neptune Radiates More Heat Than It Gets 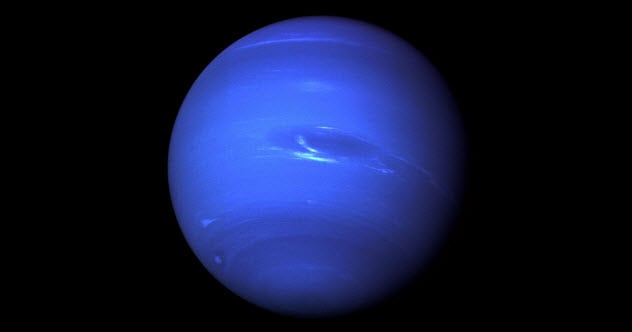 If a planet is far enough away from the Sun, you sort of expect it to be an icy hellscape. Just look at Pluto: The warmest location on Pluto is about -223 degrees Celsius (-369 °F), and scientists think the dwarf planet once had rivers of liquid nitrogen crossing its surface.

Neptune is officially the farthest planet away from the Sun. Although it isn’t a tropical paradise by any means—surface temperatures typically don’t get any higher than -200 degrees Celsius (-328 °F)—astronomers don’t believe that Neptune is really quite as cold as it should be. This is because Neptune somehow radiates more than twice the amount of energy it gets from the Sun.[4]

Astronomers still aren’t sure why. Probably the coolest theory speculates that it may be due to diamond rains. The theory goes a little like this: Neptune’s atmospheric pressure causes the methane in its atmosphere to compress into diamonds. These diamonds then rain down, producing heat from friction caused as they fall in the heavy atmosphere. In turn, this explains the unusual amount of energy radiating from this otherwise very cold giant.

6 Pluto Seems To Have A Nearly Infinite Supply Of Nitrogen 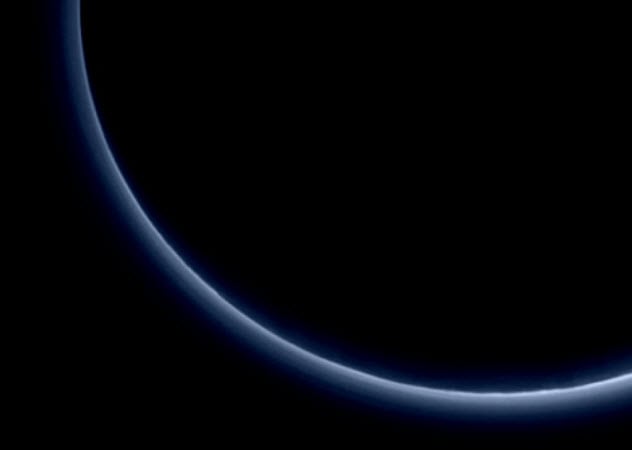 Pluto is so small that it barely has the gravity necessary to hold onto its atmosphere. As a result, Pluto is constantly losing hundreds of tons of its primarily nitrogen atmosphere as it loops around the Sun.

With this in mind, you might wonder why Pluto hasn’t run out of nitrogen yet. Scientists ponder the same thing. Their best guess is that some sort of hidden geological process must be creating all the spare nitrogen, but the exact nature of that process remains a mystery.[5] 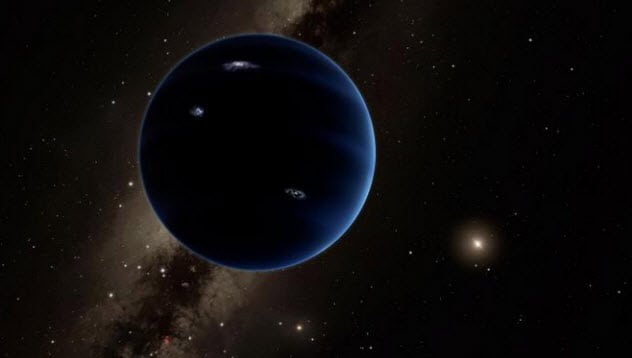 If some astronomers are to be believed, there may be a ninth planet in the solar system. Sadly, they’re not talking about Pluto. Astronomers have noticed some odd gravitational patterns in objects within the Kuiper Belt (a large asteroid field beyond the orbit of Neptune). These gravitational anomalies could be explained by the presence of a large planet.[6]

They’ve named it “Planet Nine” for now. Getting concrete proof of Planet Nine will be difficult because it will be in the outer regions of the solar system, making it hard for even our most advanced telescopes to locate. Astronomers have estimated that this planet, if it exists, would be an icy world approximately three times the size of Earth. 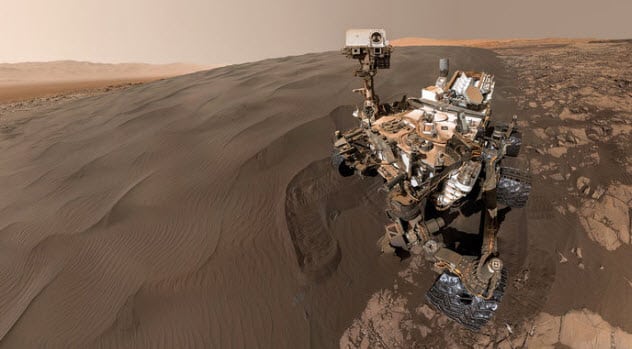 Though methane has been found to exist on many planets, astronomers still get excited whenever they discover it. This is because methane is a common byproduct of life. (You may have heard that methane is an important component of cow farts, for example.) However, methane can also be created through nonbiological means, so it doesn’t guarantee the existence of life.

Mars has nothing quite like the quantity of methane on Earth. But the small amount of methane found on Mars is exciting because the quantity varies quite frequently. What’s more, this variation seems to happen based on the seasons.[7]

Scientists have a few theories about what causes it. For example, the methane may be absorbed and released by rocks on the surface depending on the season. Of course, the more exciting theory is that the methane changes are caused by life. (If this is the case, it’ll most likely be bacteria that live beneath the surface.) 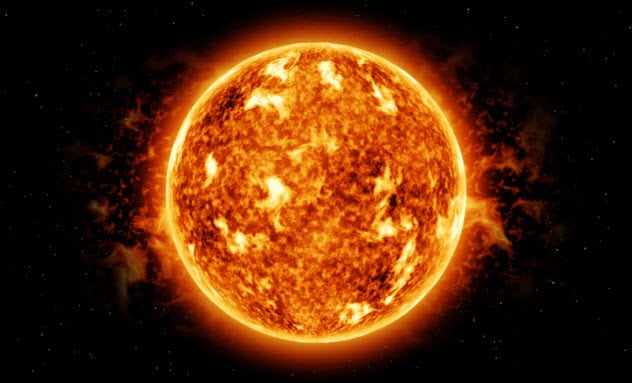 The Sun’s surface (the part of the Sun that blinds you when you look at it directly) is quite hot, to put it lightly. Although the surface is around 5,500 degrees Celsius (9,900 °F), the less visible atmosphere above the surface (known as the corona) can get several times hotter–between 1–10 million degrees Celsius (1.7–17 million °F).

The Sun’s corona is so faint that you can only see it during a solar eclipse. Then why is it so much hotter than the Sun’s bright surface?

Scientists aren’t sure. One theory is that it may be caused by millions of nano-sized solar flares that pop up on the Sun’s surface every second, transferring energy from the surface to the atmosphere above.[8] 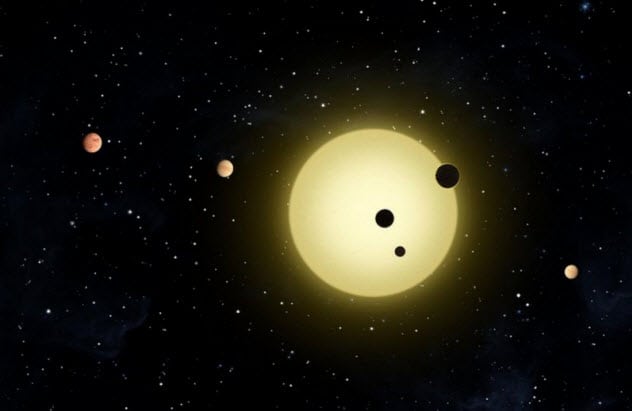 Our solar system might be a bit of a cosmic oddball. Astronomers have found that other star systems typically have similarly sized planets that are regularly spaced out in their orbits. Our solar system has no uniformity in size.

Just compare our largest and smallest planets: Jupiter is more than 28 times the diameter of Mercury, for example. From a volume standpoint, we could fit over 24,000 Mercurys into Jupiter.

In addition, the spacing between the planets doesn’t show nearly the same cohesion as the spacing in other star systems. Astronomers aren’t really sure what makes our solar system so unique. Some speculate that Jupiter and Saturn’s impressive gravitational pull may be to blame.[9] 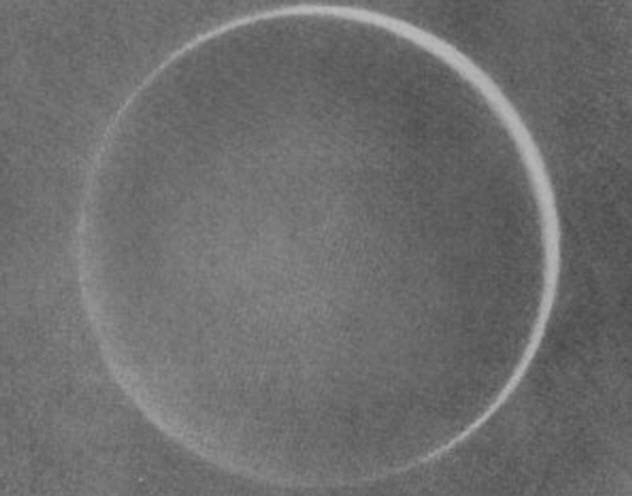 First observed in 1643, the Ashen Light of Venus is a phenomenon that lights up the dark side of the planet, making it visible to observers looking through telescopes. Unlike the other entries on this list, the very existence of the Ashen Light is up for scientific debate.

It has been described as being similar to “earthshine,” which occurs when sunlight reflected from the Earth illuminates the dark parts of the Moon. This makes sense in the case of moons such as ours. As they are close enough to a large planet, the light from the Sun can reach them at odd angles by bouncing off the planet they orbit.

However, this explanation doesn’t make sense with Venus because it has no large orbiting body nearby. Astronomers have tried to photograph the Ashen Light, but sightings are so unusual and random that all attempts so far have failed.

Many have given up trying to prove that the phenomenon exists. Even so, there are hundreds of reports of the Ashen Light—from modern amateur stargazers to the 17th-century astronomer Giovanni Battista Riccioli. This glow is so elusive and contested that it has been called “The Loch Ness of Venus.”[10]

Ada Navarro Ulriksen is a freelance writer currently based in Davis.

Read more amazing stories about our solar system on 10 Violent Events That Will Hit Our Solar System and 10 Amazing Things We’ve Learned About The Solar System In 2016.