A soldier’s life is a practical one, with gear designed to match. When we imagine warriors, whether modern or ancient, we think of gear designed for function and not form.

But throughout history, symbolism has held a powerful place in our cultures. This is reflected in armor from ages past that portrays otherworldly creatures, folklore, or exaggerated features to make the wearer an object of fear. Sometimes for show, sometimes for survival, these are 10 of the most fantastical pieces of armor ever crafted. 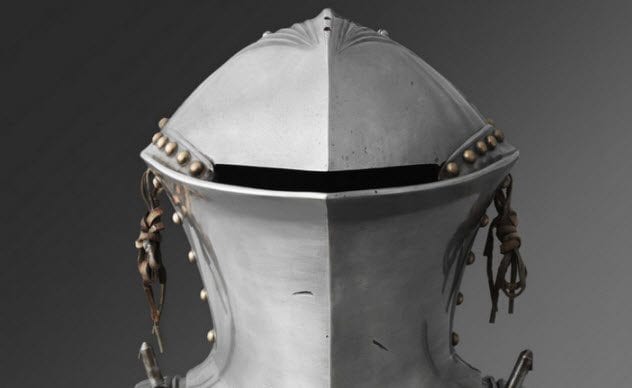 Unusual in form and name, the frog-mouth helmet seems to be the most impractical helmet possible. Its lower front plate was curved upward and protruded, which provided its signature look.

With only a narrow slit to see out of, this helmet provided no peripheral vision. It was routinely bolted in place, so there was no ability to move it at the neck. What’s more, the wearer couldn’t see forward unless he was leaning ahead slightly.

Heavy and unwieldy, this helmet would have been a death sentence on most battlefields. But it was used almost exclusively in a different sort of combat, jousting. This was an ancient extreme sport where two mounted horsemen charged at one another with lances. The goal was to dismount the opponent while not being dismounted yourself.

In this environment, the frog-mouth helmet excelled. Its lack of peripheral vision was meaningless because knights jousted in straight charges at their opponents. Also, the helmet’s odd shape helped to repel lance blows instead of absorbing them.

The frog-mouth helmet shown above was used by Maximilian I during a jousting tournament to celebrate his wedding at Innsbruck, Austria, in 1494. A masterful example of the frog-mouth helmet, it was crafted by famous armorers Lorenz and Jorg Helmschmid. 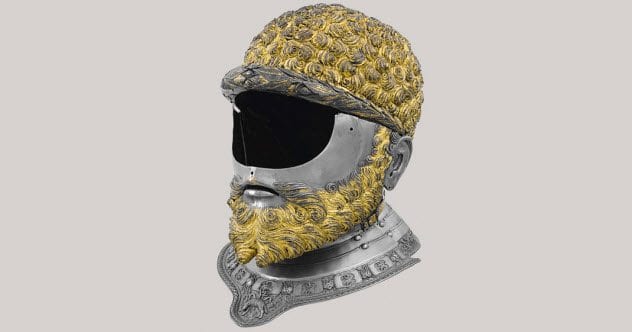 Like his grandfather, Maximilian I, Charles V appreciated outstanding armor. From his boyhood on, Charles possessed many beautiful pieces of armor, though most were symbols of his wealth and power and not used in actual combat.

One piece, in particular, stands out: a parade helmet created by famed Italian armorer Filippo Negroli. While allowing the wearer’s head to be completely enclosed, this parade helmet featured golden curly hair and a matching beard. It ensured a good hair day for any discerning Holy Roman Emperor.

The helmet, while stunning, has not survived completely. The opening now present on the upper face of the helmet would have included an additional but now missing plate.

8 Mask Visor In The Form Of A Human Face 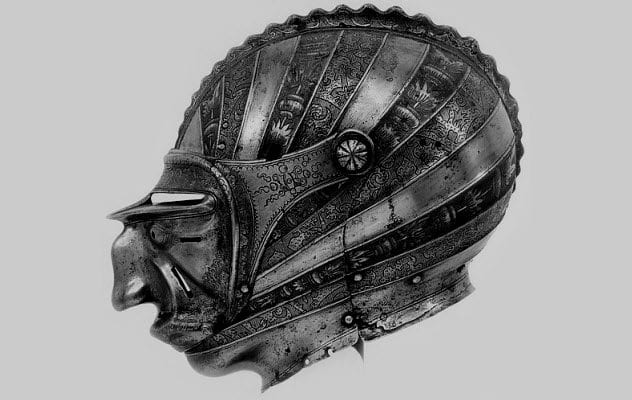 For about 30 years between 1510–1540, popular fashion in Germany and Austria included helmet visors sculpted to look like humans, either for frightening or humorous effect. It is hard to say which effect Kolman Helmschmid was going for when he created the helmet pictured above. Perhaps he was trying to outdo the look of his glorious rump armor.

The helmet depicts a mustached man with bug eyes and a smashing nose. Visors like these were used mostly for pre-Lenten festivals and were designed to be exchanged for more traditional visors during the everyday use of the helm.

7 Wings Of The Polish Hussars 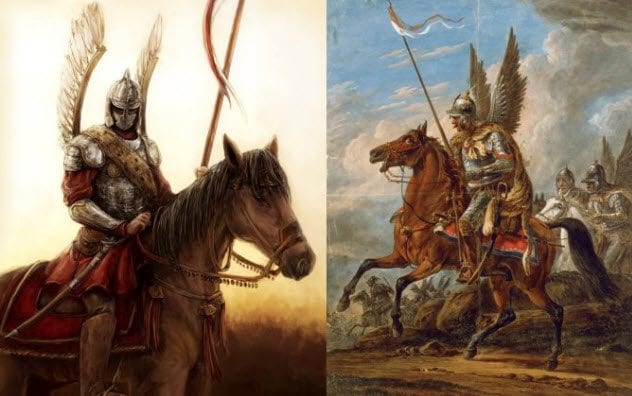 The Winged Hussars of Poland were one of the most effective cavalries the world has ever seen. For nearly two centuries, they won battle after battle, often against seemingly impossible odds.

In one such case, 200 hussars successfully defended a city from a force of 30,000 in 1581. Sweden’s King Carl X Gustav said, “If I had some 10,000 of such soldiers, I would expect to easily conquer not only Turkey, but the entire world.”

One of the most fascinating facts about this elite cavalry was that they were, in fact, winged. Dyed eagle, ostrich, or crane feathers were affixed to a decorated wooden batten and then attached to the hussar’s backpack, giving him his signature wing.

There has been much debate over the function of this piece of equipment. Some suggest that it was a noisemaking device to rattle enemy horses not accustomed to the sound. Others believe that it was a protection against lassos used by Asian horsemen.

Still, the most prevailing theory is that it was simply an intimidation tactic. These seemingly invincible horsemen were clad in furs and wings, giving them the air of otherworldly attackers. 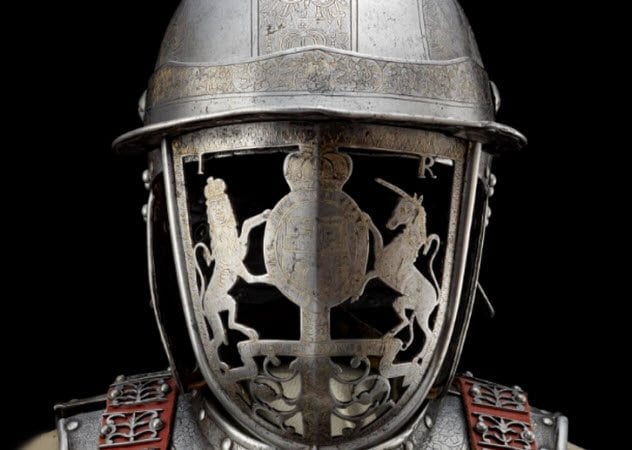 The Royal Coat of Arms was created in 1399 during the reign of King Henry IV. It has been used by the British royal family ever since, although some have used it in more interesting ways than others.

King James II, who was crowned in 1685, had a harquebusier’s armor commissioned that included a breastplate, backplate, long gauntlet, and a pot helmet as the centerpiece of the set. The helmet displayed the Royal Coat of Arms with its standing lion and unicorn immediately in front of King James II’s face.

This set of armor was bulletproof—aside from the holes in its fascinating face guard—and was commissioned for £100. 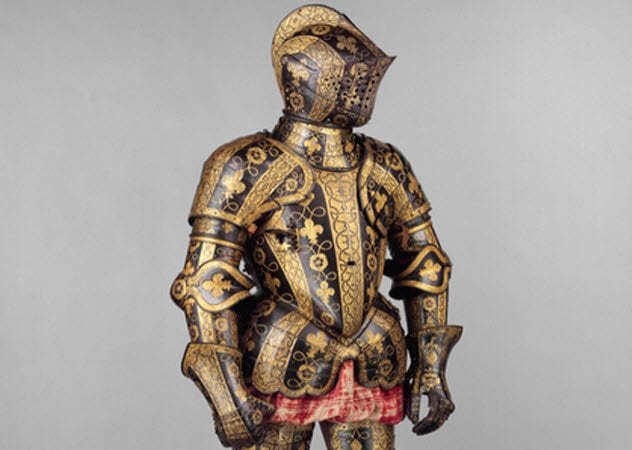 If we know nothing else about George Clifford, we know that he was a man who didn’t mind being noticed. He was appointed as champion for Queen Elizabeth I in 1590, and he incorporated her into his armor as much as possible.

His black suit of steel and gold armor was decorated with the Tudor rose, the fleur-de-lis, and the cipher of his queen (two E’s back to back). Though George Clifford did see battle—most famously perhaps was his capture of a Spanish fort in San Juan, Puerto Rico—this armor was designed for tournament use. 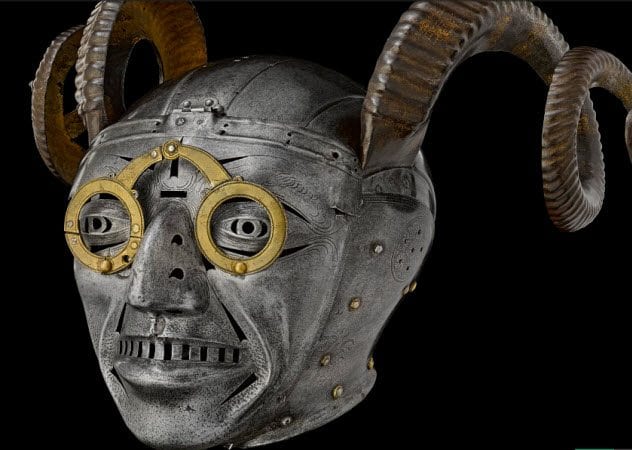 This iron helmet was one part of an entire suit of armor originally gifted to King Henry VIII by Maximilian I in 1514. Today, only the helmet survives. However, its freakish horned appearance has caused much confusion over the years.

Originally, it was thought to have belonged to Henry VIII’s court jester. This makes sense as the helmet depicts the fool, a popular character in court pageants, complete with wrinkles, dripping nose, and stubble. Scholarly debate over the nature of this gift still rages, and we’re all left to wonder what the rest of the set may have looked like. 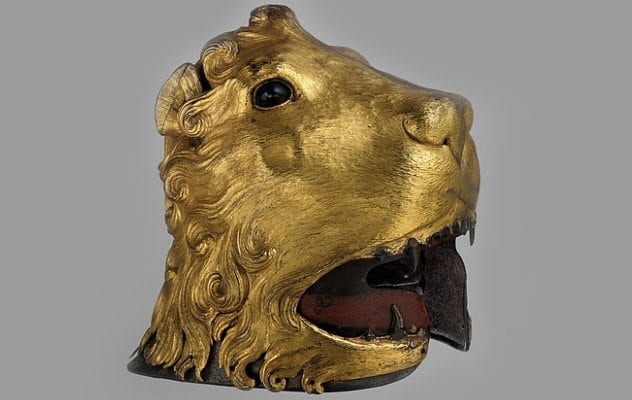 We don’t know who made this helmet or who wore it, but we do know what inspired it. The Nemean lion’s demise was the first of Hercules’s recorded exploits. Though no weapon could penetrate the lion’s hide, Hercules strangled the legendary animal to death and then wore the beast’s skin as a mantle.

Naturally, anyone would be keen to channel this story, which was often seen in Renaissance art as a symbol of strength, courage, and perseverance. So this helmet was crafted to imitate the mythological hero’s victory. The underlying helmet was plain. But the top layer is a gold-and-copper lion, sure to inspire friends and frighten enemies in equal measure. 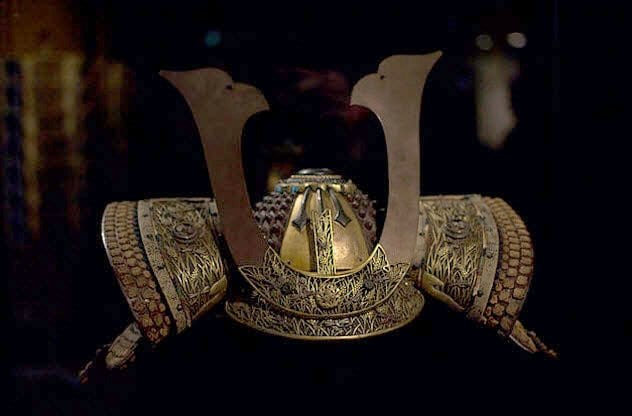 A kawari kabuto (“strange helmet”) was a popular style of helmet used by high-ranking samurai between 1467–1603. These personalized helmets frequently depicted demons or fierce animals and were used to distinguish generals from their lower-ranking inferiors.

Though a staple of the ancient Japanese warrior for centuries, the kabutos have outlived their military usefulness. Now they survive in traditional Japanese wisdom and everyday sayings.

One such saying is: “Tighten your kabuto after winning.” This warns not to rest too soon after a victory. “Take off the kabuto” is a saying that means to surrender or suffer defeat. 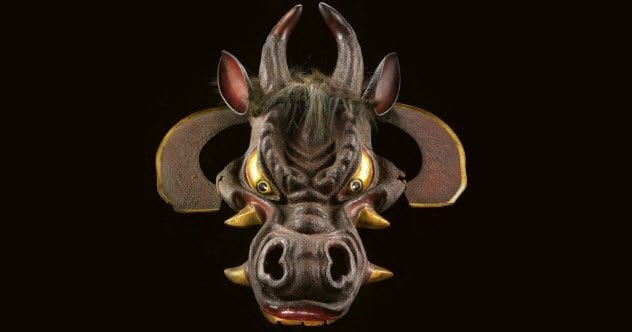 If a samurai would cover himself in terrifying representations of folklore and nature, he would naturally want the same for his horse. The bamen (“horse mask”) and bagai (“horse armor”) were used by samurai after the 17th century.

The armor was crafted from many small tiles of leather and gold that were sewn into cloth. The mask was made from boiled leather that was then shaped into the likeness of a horse or dragons, complete with horns, scales, and fiery red nostrils. The entire battle-ready horse and rider conveyed the owner’s prestige and power.