In 1932 in Depression-era America, MGM Studios came under fire after the release of Freaks, a horror film centered around carnival sideshow performers with real disabilities. The following 10 facts focus on the irrational censorship fueled by timid audiences, the public’s absurd reaction to the unknown, and the distressing exploitative nature of pre-Code Hollywood. 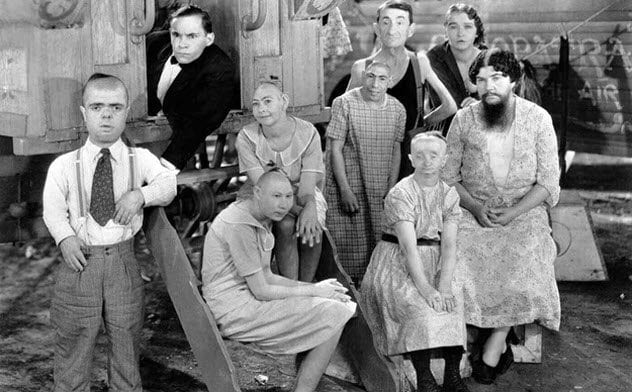 The film’s disastrous test screening was deemed “too upsetting” by moviegoers who had never before been subjected to seeing physically deformed actors on the silver screen.

In a frantic attempt to salvage a project which had already been slated for release, MGM was forced to make extensive last-minute cuts to numerous scenes. Despite the alterations, Freaks was inevitably doomed from the start because of its shocking and exploitative subject matter.

In spite of the film’s modified 59-minute version, international critics were no different in their repulsion. In fact, the movie was banned in the UK for 31 years before being released in 1963 with an X rating.

Though Freaks enjoyed a small fraction of success in only a handful of cities, an overwhelming majority of cinemas around the United States pulled the film, with some states banning it completely. Interestingly enough, some of the laws have never changed since the 1930s, still making it technically illegal to watch the movie in certain states. 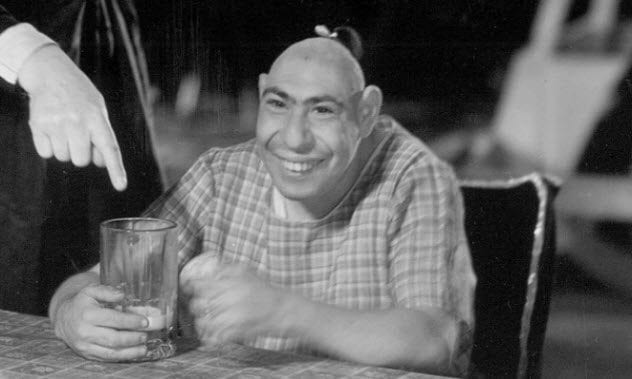 Perhaps the film’s most memorable yet disturbing performance was that of the pinhead, Schlitzie. Not much is known of the disabled performer’s early life other than a few records indicating that he was born as Simon Metz in the Bronx.

Schlitzie’s gender came as a puzzling surprise to many. Not only did he wear a dress throughout the entire film, but the studio had billed his character as a female. It’s not clear why the studio chose to do so—except perhaps to acknowledge Schlitzie’s clothing, which was solely worn due to his incontinence.

He was born with microcephaly, a condition characterized by an abnormally small cranium which resulted in severe retardation and an unsettling abnormal appearance. Microcephalics (aka “pinheads” in sideshows) were exhibited as a species apart from man and were often billed as being from other planets.

Sadly, Schlitzie’s debilitating misfortune was a gold mine to carnies who indisputably exploited him throughout his life, all the while reaping the financial rewards.

8 Criticism And A Miscarriage

The film’s principal photography was completed in December 1931, and the test screening was the following month. The false expectation of reaping endless revenue from a box office hit was soon recognized from the disastrous reception previously mentioned.

People were said to have run from the movie theater, horrified by the appalling images. One woman even threatened to sue, claiming that the film was so grotesque that it had induced a miscarriage.

Following the studio’s last-ditch effort in editing, more than 30 minutes was cut from the film. All this footage has since been lost. MGM responded to the harsh criticism by taking out ads that congratulated themselves for being the only ones in the business that dared to humanize deformity.

The ads referred to the film as “a landmark in screen daring.” They attempted to justify the picture by praising the studio’s acknowledgment of nature’s little-known “grim reality.” 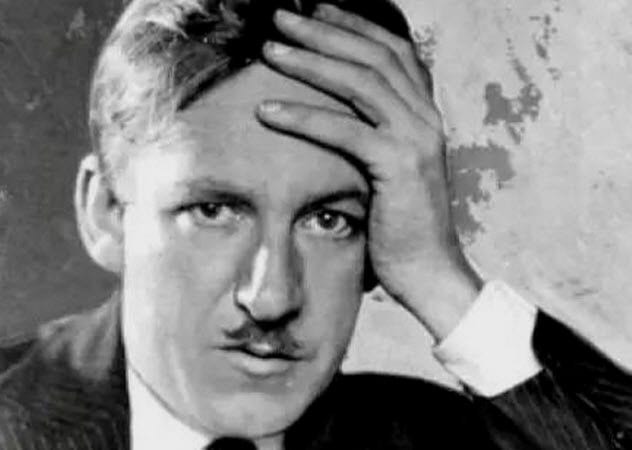 With a string of silent thrillers and 11 collaborations with Lon Chaney, director Tod Browning had already made a name for himself at MGM by the time Dracula was released, his most successful and lasting film.

The unforeseen success of the movie rescued the studio, which was in financial turmoil at the time. This allowed Browning to have considerably more leverage with future projects.

Such leeway was evident during the production of Freaks, despite the bizarre and uncharted cinematic territory the director was delving into. However, the producers were confident in Browning’s direction and believed the film was going to be as successful as his previous vampire hit.

Unfortunately for the optimistic studio, the film was a commercial failure. The immense backlash was unprecedented and proved disastrous for the director. Browning’s once renowned and flourishing Hollywood career was now in ruins, never to be recovered.

Sixty-two years after its release, Freaks was selected for preservation in the United States National Film Registry due to the film’s cultural, historical, and aesthetic significance. 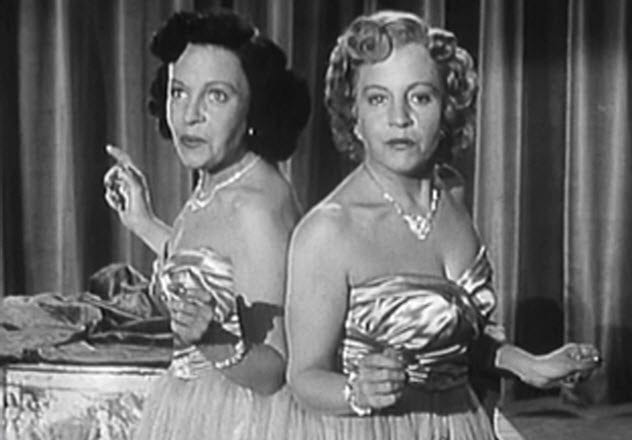 In the 21st century, it’s hard to imagine that conjoined twins would be the subject of a sideshow spectacle. However, such was the case nearly a century ago when the public’s understanding of this rare phenomenon blurred the lines between reality and science fiction. Of course, this is evident with the casting of Daisy and Violet Hilton in Freaks.

Perhaps the best example of society’s lack of knowledge pertaining to in utero malformations was that of F. Scott Fitzgerald when he encountered the Hilton sisters for the first time. While on the set of Freaks, a drunken Fitzgerald found himself in the studio’s commissary where he unexpectedly came across the girls reading from a menu.

Fitzgerald, who was working as a screenwriter at the time, was so unnerved by the sight that he immediately scurried outside to vomit. The unsubtle exaggerated response merely echoed a nation’s lack of compassion for those considered to be different from the everyday norm.

The Hiltons made one more film, Chained for Life, in 1952. But they found themselves in poverty a few years later. Just after Christmas 1968, Daisy succumbed to the flu, leaving Violet alone and with her own mortality nearing. Their bodies lay undiscovered for several days. It was later determined that Violet had died two to four days after her sister. 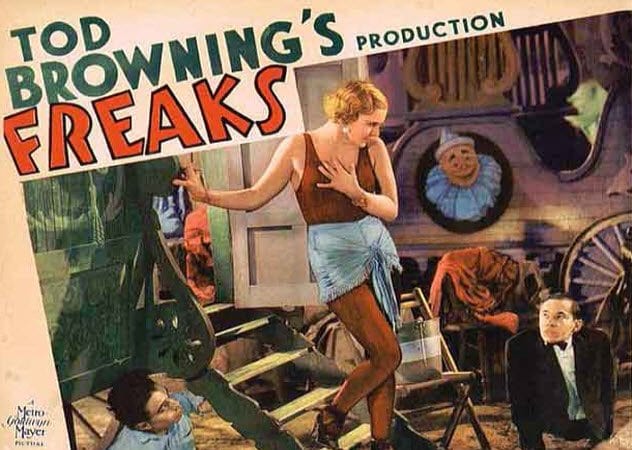 Long before Tod Browning had the unfortunate privilege of directing Freaks, he had a firsthand look into the intimate lives of circus performers. Browning was just 16 years old when he ran away to join the carnival in 1896, a time in history when the popularity of sideshows was at its peak.

Beginning in the mid-19th century, the public’s curiosity to catch a glimpse of actual “freaks of nature” was fueled by P.T. Barnum and drove Americans to traveling sideshows. Throughout the years, cinema began a slow but overwhelming takeover as the sideshow’s main attraction, beginning with the introduction of kinetoscopes.

At the beginning of the 20th century, nickelodeons opened across America, further challenging the longevity of traveling carnivals and the wonders that once enchanted a crowd. Nonetheless, Browning’s years as a carny left a lasting impression on him. It not only influenced his most notorious box office bomb but inspired him to direct 1925’s The Unholy Three, a crime melodrama involving circus freaks. 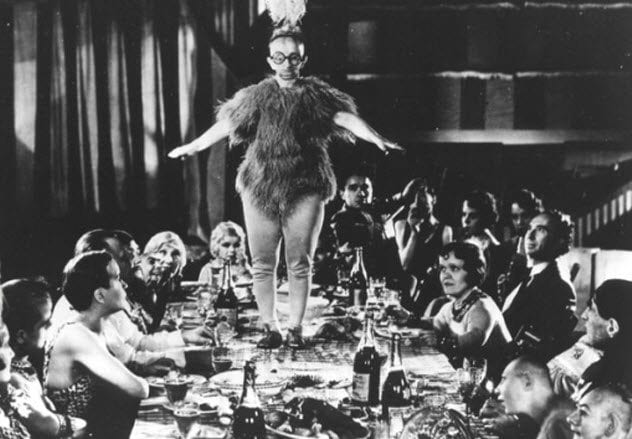 When filming began on November 9, 1931, MGM Studios took every precaution to keep the premise of the movie a secret. Most importantly, the “freaks” were kept out of sight from anyone who was not directly connected to the film.

Even those intrinsically involved with the picture found it difficult to work in an environment they felt was uncomfortable, as if they were working beside septic monsters. Film editor Basil Wrangell regretted ever taking the job, claiming that the mere sight of them made you “crawl up the walls.”

One of the only cast members who afforded the “freaks” dignity was Olga Baclanova, who was initially taken aback by their abnormal appearances. At first, she struggled to even look at them, let alone form friendships.

The feeling of uneasiness carried throughout the studio to the point that the “freaks” were not even allowed to share the same eating quarters as the rest of the crew. Succumbing to pressure from fellow producers and studio executives, Louis B. Mayer banned any and all “freaks” from entering the studio’s commissary. He had received numerous complaints of people “throwing up” simply from being around the “freaks.” 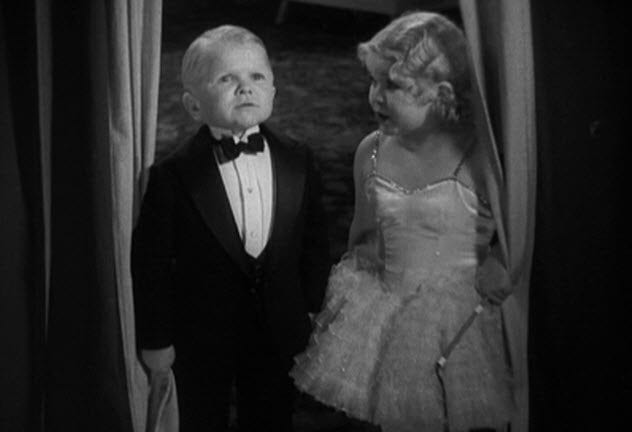 It would be reasonable to assume that a group of people who shared profound maladies would ultimately form a bond rooted in understanding each other’s hardships. Nothing could be further from the truth, however, among the cast of Freaks.

It was undoubtedly clear in live sideshow performances which character was the main attraction. Typically, the show had only one performer who was genuinely deformed while the rest of the actors were in costume.

Such routine privilege proved difficult among an entire cast who had grown accustomed to being the star of their own show. Their inflated egos clashed, and the competition for attention grew.

One by one, the “freaks” began behaving like prima donnas on set, with several of them wearing sunglasses and acting like big-time movie stars. According to director Tod Browning, “the professional jealousy was amazing.” Not one of the physically deformed cast members had a good word for the others. 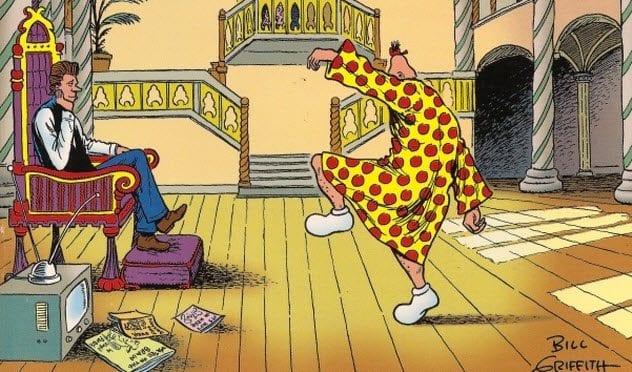 When Freaks momentarily hit the silver screen in the early 1930s, few imagined that one of the more ghastly characters would inspire a nationally syndicated cartoon strip.

In 1970, cartoonist Bill Griffith was feeling the pressure to create a “very weird” yet memorable character that wouldn’t easily fade from one’s memory. After rifling through a large collection of circus sideshow postcards, Griffith came across a familiar face that brought back haunting recollections of the 1932 cult classic.

Schlitzie, whom we have previously discussed, fascinated Griffith not only because of his apparent physical abnormalities but also because of his innocent, childlike demeanor. Schlitzie seemed oblivious and disconnected to the world around him. This led to the birth of Zippy the Pinhead, Griffith’s ideal caricature of someone who was the embodiment of eccentricity.

Though Zippy would go on to become an American comic strip icon, the exploited man who was the muse for such success would unceremoniously fade from the spotlight. Schlitzie died seven years after the cartoon’s first publication. He had traveled with various circuses and sideshows until his death in 1977.

From the moment Freaks hit the silver screen, it was clear that MGM would be in for a significant financial loss. Hoping to make back any money, the studio sold the film rights to exploitation distributor Dwain Esper, who altered the opening as shown in the video above.

As if Freaks had not already been controversial enough, Esper retitled the picture several times with names such as Forbidden Love, Nature’s Mistakes, and The Monster Show.

In addition, Esper released new posters exploiting the images of the deformed cast and particularly increased the focus on sexual innuendos by adding his own incendiary interrogatives. Some of the exploitative ad lines read, “Do Siamese Twins Make Love,” “What Sex is the Half-Man Half-Woman,” and “Can a Full-Grown Woman Truly Love a Midget?”

After editing out select footage and adding in his own bizarre reels, Esper toured with an adults-only road show where he showed the film for a fee. In time, he hired his own group of deformed individuals. He exploited them for audiences prior to playing the movie.

The film was projected onto hanging canvas banners that were set up in a tent he had constructed, keeping the bizarre act on the road for five long years.