“All’s fair in love and war,” is an excuse some of these individuals may have to rely upon. Although many simply did what they had to do in order to survive Nazi terror, others sought to profit from National Socialist power. It was a war which tested the morality of millions, and whilst some chose to take the high road, an alarming number of famous individuals did not. 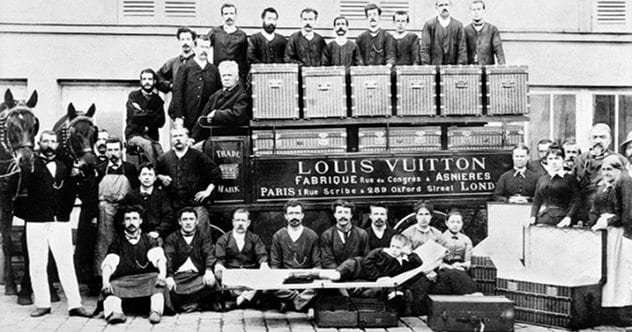 The Louis Vuitton store was the only shop permitted to remain open on the ground floor of the Hotel du Parc in occupied Vichy, throughout WWII. This grand property was none other than the headquarters of Marshal Philippe Pétain’s puppet government, and Henry Gaston (Vuitton’s grandson) had been urged to forge links with the Petain regime in order to help business.

Gaston soon became a regular at the Gestapo’s favorite café nearby and was even one of the first Frenchmen to be decorated by Pétain’s government. Although not mentioned in any of its business records, the Vuitton family has been accused of setting up a factory purely dedicated to creating busts which glorified the Pétain campaign. 2,500 of them to be precise. I wonder if they had the infamous LV engraved across them too . . . 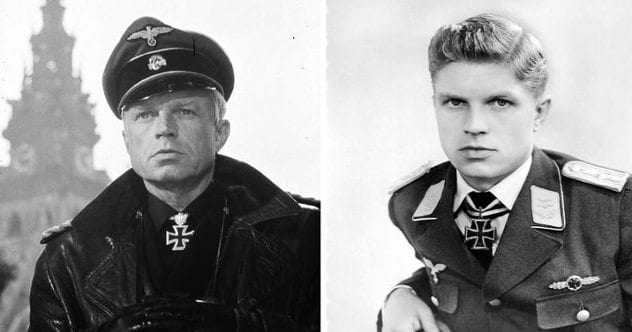 Whilst most famous for his films with John Wayne and Richard Burton, Hardy Kruger began his career as an actor for the Nazis.

Alike many German boys of the time, at just 13 years old Kruger was a member of Hitler Youth. And by the young age of 15, had starred in a German film called Young Eagles. The film was released in 1944, and whilst on set, the young Kruger became particularly close to a veteran German actor called Hans Sohnker. It is believed that Sohnker knew details of the Holocaust taking place at the time and passed this information on to young Kruger.

Towards the end of the war, at 16 years of age, Kruger was recruited into the SS Division Nibelungen. When ordered to kill a group of American soldiers, Kruger simply could not do it and was almost executed by firing squad for cowardice. The order was stopped, however, and Kruger managed to abandon his squadron to take refuge in the mountains until the war was over. 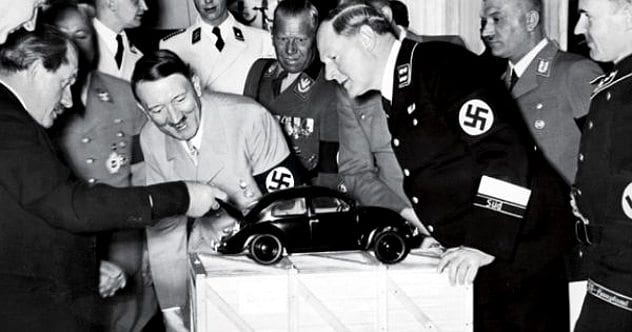 If you say the word Porsche nowadays, most people picture lavish sports cars racing at top speeds. However, this has not always been the case.

In 1933 when Hitler took power, Ferdinand Porsche announced his idea for a small and most importantly, inexpensive car at the Berlin auto show. It was here that Hitler himself also announced his plans to turn Germany into a motorized nation, in the same way Henry Ford had transformed America. Consequently, in 1934, Hitler and Porsche met to discuss the plans for a “People’s Car” or translated into German, the Volkswagen.

As a result, the Volkswagen Bug/Beetle was created, and an estimated 23 million VW bugs have been produced since, making it one of the best-selling cars in history. In order to produce such numbers, at a time when Ferdinand Porsche was general manager, prisoners of war were sent to the Volkswagen plant in Wolfsburg, Germany, to build the vehicles. A supposedly keen Nazi himself, Ferdinand Porsche not only used his influence to push forward new ideas but also profited economically in an immense way. 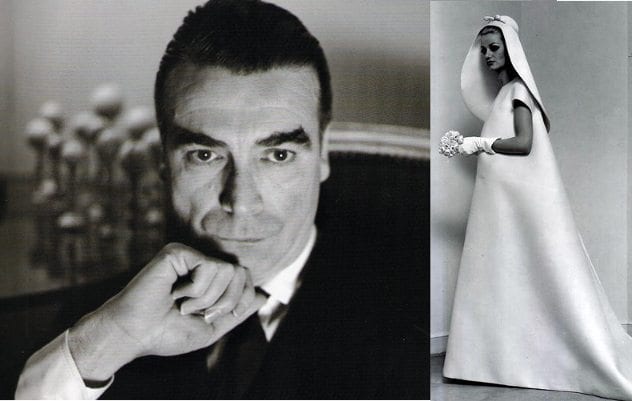 Dress-making from the age of three, a Nazi invasion, in 1940, was not going to cause the determined Balenciaga to shut shop for long.

When the Nazis invaded France, they demanded that the country’s prestigious fashion industry move to Germany. However, Lucien Lelong negotiated a middle-ground with the Nazis; agreeing to hand over all of the industry’s Jews in return for France’s fashion industry to be allowed to continue to operate in both Lyon and Paris.

Balenciaga, although not a part of this deal directly, did profit from it, being one of sixty firms that the Germans allowed to function. He opened up his fashion house in Paris again in 1940 and did particularly well due to his connections with Hitler’s ally General Franco. The designer was a close friend of Franco’s wife, designing many dresses for her before the war and continued to do so throughout. In fact, Balenciaga’s final dress, which he came out of retirement especially to design, was General Franco’s granddaughter’s wedding dress. 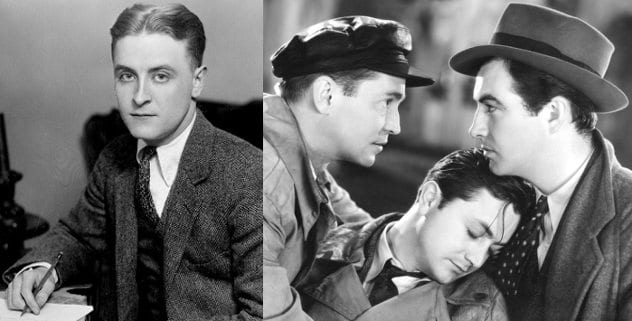 The now infamous American author of the Great Gatsby had slipped out of the literary limelight by the mid-1930s. Fitzgerald was now desperately short on money thanks to his troubles with alcohol, the upkeep of his daughter, and his wife Zelda’s institutionalization bills.

However, in 1936, it was the world of Hollywood which suffered even more greatly. The studios were failing to break even thanks to Nazi censorship, and now only the three largest companies remained in Germany—MGM, Paramount, and Fox. In April 1937, the final volume of Erich Maria Remarque’s trilogy, Three Comrades, was released in the United States. This novel was prime Hollywood material and was set in the late 1920s, throughout the Nazis slow rise to power.

The MGM producer at the time, Joseph L. Mankiewicz, decided to hire F. Scott Fitzgerald to write the script. Fitzgerald was paid $1000 a week for six months; a desirable sum when the average yearly wage was $1780. The author wrote a powerful script which viciously opposed the rise of National Socialism in Germany, and could have been the first anti-Nazi film by a Hollywood studio. Unfortunately, the film was overtly sanitized, and whilst Fitzgerald made vast economic gains from painting the Nazis as poisonous villains, the public never gained the wisdom he imparted. 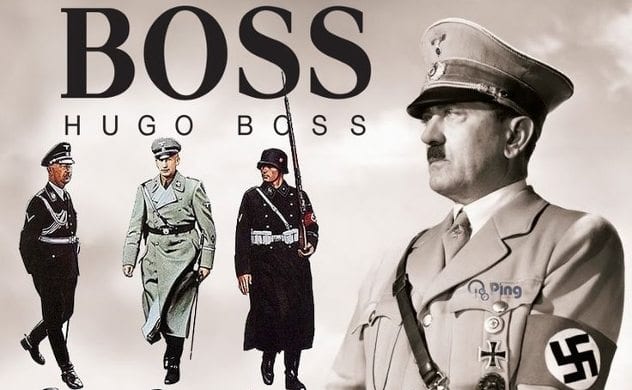 Hugo Ferdinand Boss, the founder of the fashion label Hugo Boss, was an avid National Socialist, supporting the Nazis not only in a chase for profit but in their beliefs also.

The brand recently issued an apology for its maltreatment of forced workers in WWII, in which it used 140 Polish and 40 French workers. The initially family run business, at first solely produced police and postal uniforms. However, one of their first contracts was to provide brown shirts to the early Nazi party stormtroopers. Later, Boss provided the black and brown uniforms for the Hitler Youth, until finally mass producing the infamous black SS uniforms.

As you can imagine, Hugo Boss profited from these contracts immensely. And, although Hugo Boss did not design the SS uniform himself, it is now synonymous with evil, and we have its production to thank for the costumes of the Imperial Officers in Star Wars. 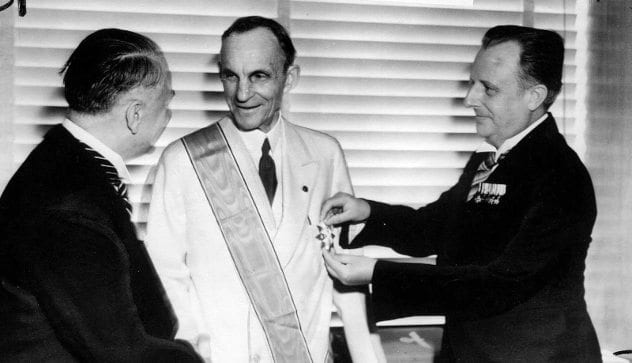 There is something odd in the association of a man who came to symbolize the forward thinking “American Dream” with the essentially backward thoughts of National Socialism.

And yet, in 1938, Henry Ford was presented with the Grand Cross of the Supreme Order of the German Eagle on his 75th birthday. Ford was the first American recipient of this Order, and it was the most prestigious honor given to a foreigner by Nazi Germany. It was presented in a display of Adolf Hitler’s indebtedness to the manufacturer. Ford is even mentioned admirably in Mein Kampf.

Hitler himself said he regarded Ford as his inspiration and supposedly kept a life-size portrait of the manufacturer on his desk. German engineers adopted some of the technological and functional techniques of Fordism in their modeling of the Volkswagen, even using Ford engineers to staff the new plant.

Although Ford was openly anti-Semitic, he furiously opposed war and despised the militaristic side of Nazism. Yet, before America entered the war, Henry Ford supplied Germany with military equipment but refused to build engines for Britain’s RAF. 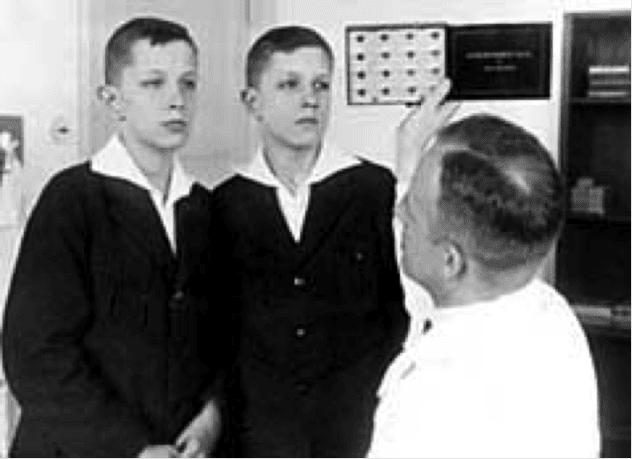 Hitler’s interest in eugenics and his quest for the “Master Race” of blonde haired, blue eyed Aryans was not a new concept thought up by the Nazi leader. By 1909, nearly half of the world’s coercive sterilizations had been done in California in the name of eugenics.

The Rockefeller Foundation was one group of these keen eugenicists. By 1926, they had donated $410,000, or $4 million in today’s money, to hundreds of German researchers. $250,000 of this money went to the German Psychiatric Institute of the Kaiser Wilhelm Institute, where Ernst Rudin, who later became the director of Hitler’s systematic medical conquest, studied and practiced his methods.

In 1929, when a Rockefeller grant of $317,000 arrived, the Institute for Brain Research was expanded and re-built, later becoming the centerpiece for Rudin’s murderous experiments.

Another recipient of Rockefeller funding was the Kaiser Wilhelm Institute for Anthropology, Human Heredity, and Eugenics in Berlin. And it was here, thanks to Rockefeller funding and the institution’s resultant expansion, that Joseph Mengele developed his grotesque fascination with twins.

Although the Rockefellers were not to know the monsters that their funding would produce, their donations helped to ground eugenics in supposed science and thus legitimize Hitler’s campaign. 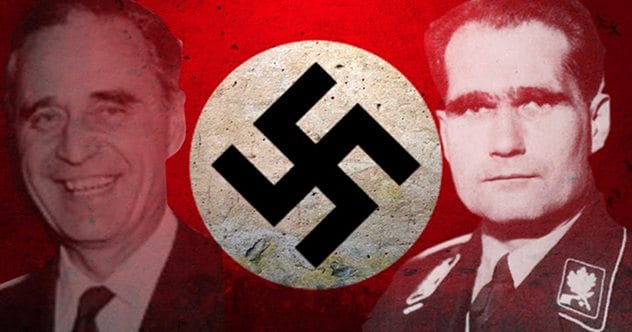 George W. Bush’s grandfather, Prescott Bush, was one of the directors for Union Banking Corp: an investment bank based in New York, owned and controlled by the Fritz Thyssen family.

The Fritz Thyssen family were incredibly wealthy owners of almost all of Germany’s steel industry. After hearing Hitler speak, Fritz Thyssen became enthralled by the young politician and joined the Nazi Party in 1931. When the National Socialists remained simply a radical fringe party, Fritz Thyssen personally funded Adolf Hitler’s rise to power, stepping in many times to bail out the struggling party.

In 1928, Thyssen even purchased the Barlow Palace on Briennerstrasse, Munich, which later became the headquarters of the Nazi party. Up until 1941, when Thyssen lost Hitler’s favor, the company relied on forced labor from concentration camps such as Auschwitz, a camp which led to the death of over a million people.

Yet, until Pearl Harbour in 1941, Prescott Bush’s Union Banking Corp continued to fund the steel company responsible for building the planes and tanks which were at the time crushing the Allied Forces. The company’s assets were eventually seized in 1942 under the Trading with the Enemy Act. However, it is believed that Prescott Bush and Herbert Walker helped Fritz Thyssen transfer all his ownership documents to New York in order to avoid prosecution in the Nuremberg Trials. 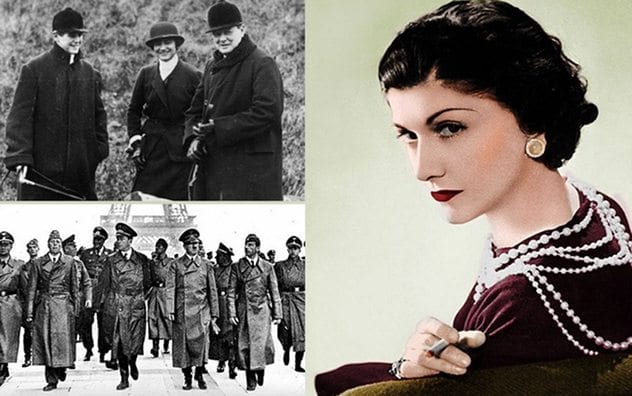 Designer Coco Chanel is most commonly associated with quilted bags, opulent dresses, and that infamous waft of Chanel No.5 floating through parties. It would surprise many, therefore, to think of Coco as a Nazi spy.

Chanel, however, was an opportunist, not only in her business ventures but in life. Although she did not care for the politics of Nazism, she naturally gravitated towards power in occupied France, and she found herself having an affair with a 44-year-old German officer Baron Hans Guenther von Dincklage. This German officer was, in fact, a professional Abwehr (German spy) officer, who had been working in France since the late 1920’s.

It seems the relationship was equally manipulative, both using each other for personal gain. Whilst Von Dincklage arranged for Chanel to live in the luxury of the Hotel Ritz, the designer was signed up as Agent F-7124, codenamed “Westminster,” to the German Abwehr.

Ever an opportunist, Chanel managed to maneuver the release of her nephew Andre Palasse, from a prison camp in Germany. In return, she traveled to Madrid, in August 1941, with special permission from the Germans, in order to gain political intelligence. The designer only exchanged trivialities with a British diplomat, however, and the trip was not revealing in any way.

Nevertheless, the next time you imagine Coco Chanel as the classic Parisian designer, prancing around a room wearing a tape measure and smoking dramatically on a cigarette, perhaps you should think twice.