The great names in history are swamped with facts that we hear about repeatedly. However, some tidbits fall through the cracks, only to be dusted off when researchers dig deeper.

Often, the process unearths fresh facts and finds which inject more life, mystery, and quirks into historical accounts. From medical conditions that gave famous artists their brilliance to exorcisms on modern saints, plenty remains on offer about well-known lives. 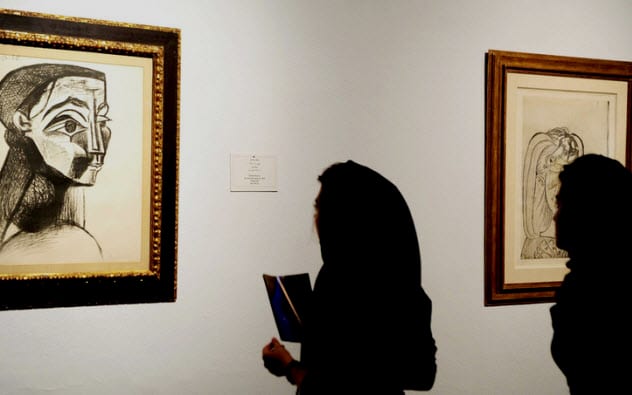 During the 1970s, the empress of Iran helped create a museum for modern art. In 1979, when she and her husband fled the country due to demonstrations against him, the last shah of Iran, the art was quickly hidden in the museum’s basement.

This was a sad turn for art lovers. The collection was one of the greatest compilations of postwar art from the West, consisting of thousands of pieces. After the removal of these pieces, the galleries displayed revolution propaganda.

Recently, renovations led to a heart-stopping discovery. Curators had always known the museum owned two Picassos. While working in the storage areas, 10 unknown Picassos turned up. This was followed by a forgotten sketch by Marcel Duchamp, another valuable find.[1]

For the first time in decades, many of the hidden works will be shown again. These include the new Picassos, the Duchamp sketch, and work by Andy Warhol as well as several Iranian artists in a mixed Western and Middle Eastern exhibition. 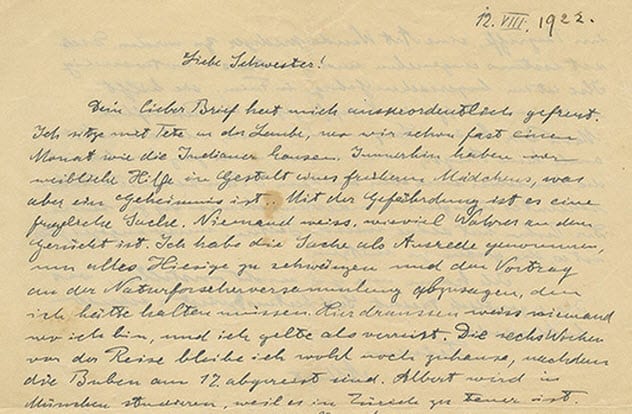 In 1922, Walther Rathenau, the German foreign minister, was assassinated by a right-wing group, most likely because he was Jewish. He was a close friend of famed physicist Albert Einstein, a fellow Jewish German. His friend’s death shook Einstein badly, and he was forced to go into hiding after police warned that he might suffer the same fate.

When he disappeared in 1922, nobody knew where he went. Incredibly, a letter written during this time surfaced. He let his sister, Maja, know that he was well but also expressed his concerns about the rise of dangerous nationalism in Germany.

Considering his traumatic experience, this was no surprise. What made it noteworthy, however, was that this was 10 years before the Nazis took over. Einstein ultimately came out of hiding and returned to Germany after a speaking tour. But he left for good when the Nazis gained power in 1933. He lived out the rest of his life in America.

The letter was also recently auctioned in Jerusalem for a nifty $39,350.[2] 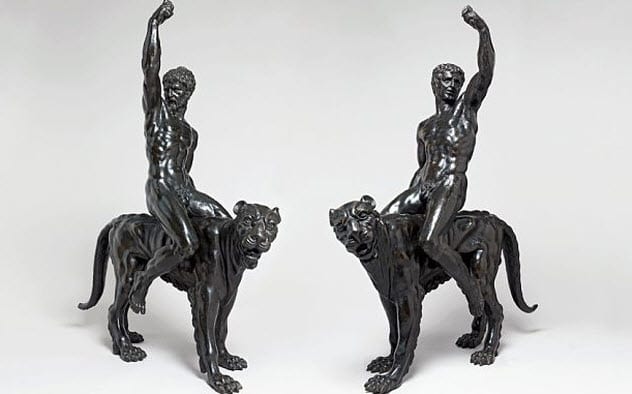 The great Renaissance artist Michelangelo created three known bronze works. All were lost during periods of civil unrest. In 1878, a pair of bronze statues was purchased by the Rothschild family. Each showed a naked man straddling a panther. Their anatomical perfection and recognition by Sotheby’s as Florentine suggested that the set was created by Michelangelo’s follower Daniele da Volterra.

However, in 2018, several points suggested that the master himself was behind the Rothschild bronzes. Both nudes showed a certain leg muscle only recognizable by a trained professional. The statues also had auscultation triangles (spots on the lower back with no bone or muscle), a feature only recorded by the medical world about a generation later.

It is well-known that Michelangelo dissected human cadavers, which gave him this insider knowledge. The pair’s impressive eight-packs, elongated second toes, and pubic hair all matched Michelangelo’s style.[3]

Neutron analysis placed the statues firmly within the artist’s lifetime (early 16th century). The Rothschild set is now considered authentic Michelangelo and his only surviving bronzes. 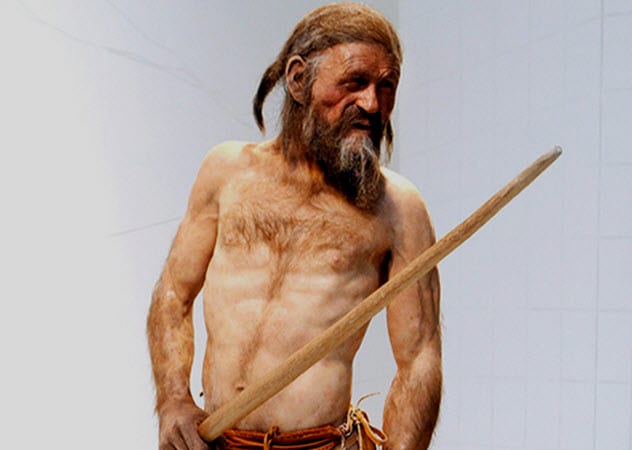 In 1991, hikers in the Alps found an ancient body. As one of the world’s best-studied mummies, Otzi came with a fair share of mysteries and amazing facts—like 61 tattoos and his death by murder.

His medical history was also mapped in detail. This made a new health-related find very surprising. When Otzi was killed 5,300 years ago, he was in his mid-forties but fit. Even so, he was a heart attack waiting to happen.

A full body scan in 2018 found hardened plaques, or calcifications, in three locations around his heart. This heightened his risk of an attack. Another scary calcification clogged his carotid artery, which elevated the chances of a stroke. This supported an earlier study suggesting that he had a genetic tendency for fatty deposits capable of narrowing veins.[4]

The older research also found signs of artery disease in Otzi, but the 2018 scan was the first to reveal that the problem extended to his heart. This makes Otzi one of the most ancient cases of vascular calcification. 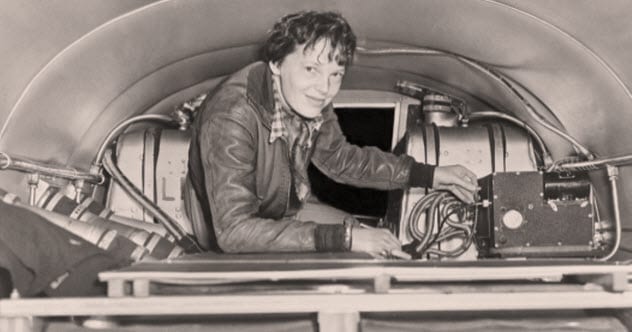 Historians always knew about distress calls hailing from a Pacific island. They were dismissed as wishful thinking or hoaxes. The reason? They appeared to come from aviator Amelia Earhart, missing since July 2, 1937.

In 2018, a study reviewed the calls, which were recorded between July 2 and July 7, 1937. They told a harrowing story. Earhart and her navigator, Fred Noonan, had crashed on a coral reef near Gardner Island. They were both hurt. Most calls came as nighttime clusters. Researchers believe she charged the plane’s batteries with the propellers during the day while she stayed on the island.

At night, she sent messages, with silence in between the clusters as the engine needed to stop and cool down from the tropical environment. Other scholars do not agree.[5]

Even if the now-missing human bones (found in 1940) were hers, some believe that Earhart would not have landed with her wheels down, as described by the messages. An experienced pilot would not lower the wheels when heading for a reef. The coral would have torn the landing gear and lurched the plane forward, preventing the propellers from moving and charging the batteries. 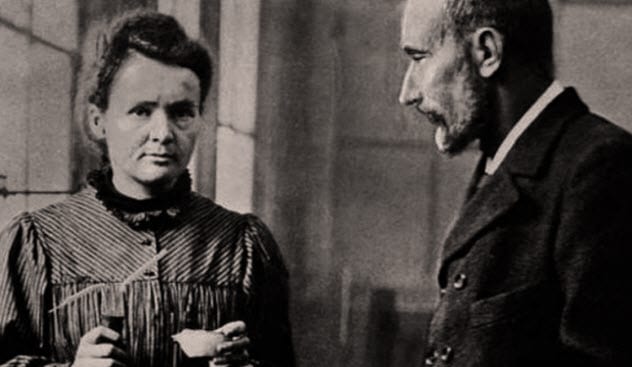 In her lifetime, Marie Curie won two Nobel Prizes—one for chemistry and one for physics. Unfortunately, her famous discoveries ultimately caused her death. Alongside her French physicist husband, Pierre Curie, she discovered radium and polonium in 1898. Both elements were exceptionally radioactive.

Eventually, the radiation gave Curie aplastic anemia. Also known as the “mother of modern physics,” she left behind many notebooks. Today, they are viewed as scientific and national treasures.

However, the radium 226 contaminated a lot of Curie’s belongings, including the notes. They are housed in lead-lined containers at the Bibliotheque National in Paris. This precaution was necessary because they remain highly radioactive over a century later. This is an eye blink for radium 266 as its half-life is around 1,600 years.

People can view her books. But they must sign waivers and don protective suits before they can do so. Much of her clothing, furniture, and belongings are considered hot as well. Curie’s radioactive body was buried in a lead-lined coffin.[6] 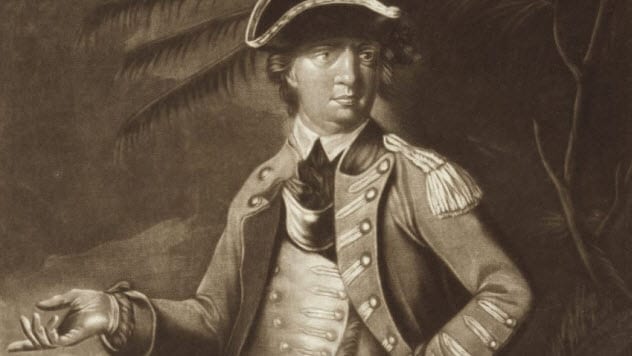 Benedict Arnold was one of America’s most famous traitors. During the Revolutionary War, he attempted to sell the fort at West Point to the British. Before this, Arnold was involved in another failed move—the attempt to invade Canada in 1775.

His plan was brilliant and had the support of George Washington. The idea was to deprive the British of lucrative trading and strategically superior territory as well as to convince French Canadians to support the Americans.

However, Arnold failed to consider the weather, British loyalists, Canadian wilderness, and soldiers defending Quebec. The man who built the expedition’s boats was a British loyalist and intentionally created such inferior vessels that most of their supplies sank. A hurricane destroyed some more.

During the trek through harrowing wilderness, most of Arnold’s men deserted. When they finally attacked, a blizzard descended and his support unit outside Quebec was killed by a single cannon volley. Somebody shot Arnold in the leg, and he almost died. Most of his men perished.[7]

He kept the city under siege with a single cannon. But he was eventually ordered back home where he became a nonentity without hope of promotion. This could have led to the desire years later to switch sides. 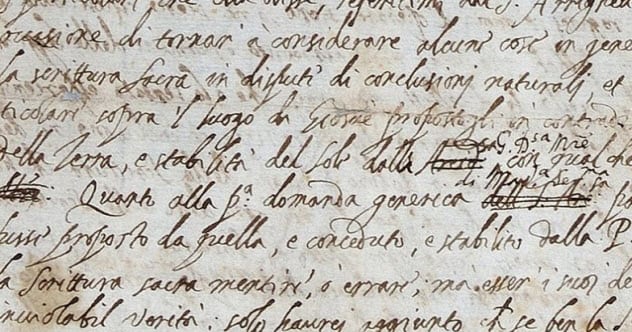 Galileo Galilei’s own work convinced him that astronomer Nicolaus Copernicus was right. In 1543, Copernicus suggested that the Earth orbited the Sun, not the other way around. In Galileo’s lifetime, the Church considered this heliocentric view an outright heresy. The situation spawned a mystery.

Today, two letters show Galileo’s attempt to defend his views. One was toned down; the other was quite inflammatory. Galileo had always maintained that the fiery version was a doctored copy of the milder letter and was created by spiteful Church officials. Indeed, Galileo was eventually condemned for heresy and imprisoned in his own house for the rest of his life.

In 2018, a historian unexpectedly found a letter in London’s Royal Society Library. Written by Galileo in 1613, it showed clear as day that his original letter was indeed the inflammatory one. Incredibly, the long-lost letter showed the edits (in Galileo’s hand) to turn it into the more passive communication. Unfortunately for him, the original quickly landed in the wrong hands after he sent it to a friend.[8] 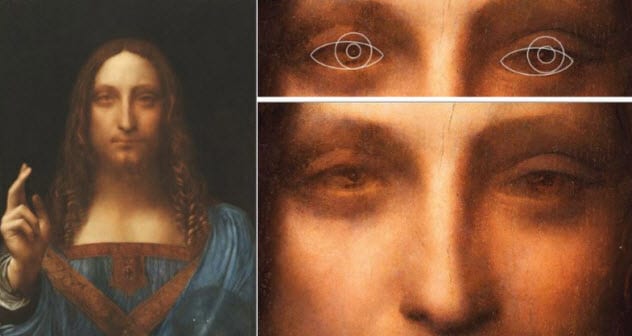 Leonardo da Vinci’s depth perception made his paintings exceptional. In 2018, researchers wondered if he had a little help in the form of strabismus, commonly known as crossed eyes. The information in one eye is often suppressed when both eyes look in different directions. This creates a 2-D view that could add an artistic edge to painting and sketching.

The study focused on six works, all portraits or self-portraits of the master. The idea was to get a good look at his pupils. Though it could not confirm that da Vinci had the condition, the collection presented a strong case. In each, one or both eyes looked outward. This was more evident in portraits painted by others than in those painted by his own hand.

The latter suggested that his type of strabismus was intermittent exotropia. In this case, the condition was more pronounced when at ease (for example, when posing for a portrait) and less obvious when concentrating (when painting himself). Interestingly, self-portraits of Rembrandt van Rijn and Pablo Picasso showed that they also had strabismus.[9] 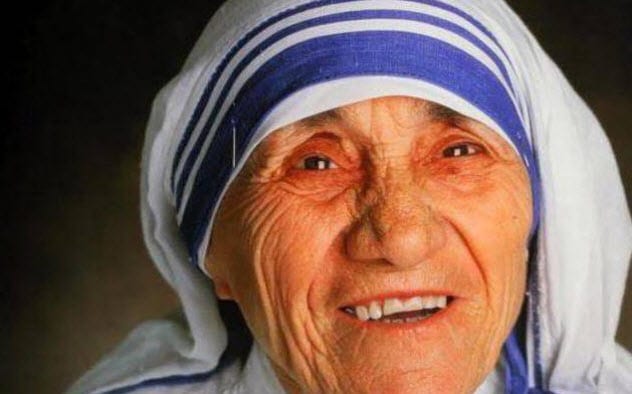 In 2001, the archbishop of Calcutta made a startling announcement. Months before she died in 1997, Mother Teresa had undergone an exorcism. In 1996, the archbishop, Henry D’Souza, had visited her in the hospital. The 87-year-old nun was a close friend, and he became concerned with her strange behavior.

Mother Teresa was restless, pulled out her wires, and appeared dazed. The second night he visited, she continued with the odd behavior. Concerned that evil spirits and possibly the devil were attacking the weakened nun, the archbishop suggested an exorcism. According to him, Mother Teresa agreed.[10]

A priest arrived and also noticed that the Nobel Peace Prize winner was “behaving strangely.” The exorcism lasted half an hour and consisted only of prayer. Afterward, Mother Teresa slept peacefully.

By 2001, the late nun was on track to become a saint. The priest who had performed the exorcism said that hundreds of saints had experienced the procedure. Her case was undoubtedly included in a 35,000-page investigation into her life which had been handed to Pope John Paul II. In 2016, Pope Francis declared her Saint Teresa of Calcutta.