From guillotine earrings worn by ladies of fashion to guillotine toys constructed for young children, the widow, as it was called, held the public in fascination and fear. People screamed for its use and, at the same time, worried about whether it caused unnecessary pain.

Guillotine executions were an industry unlike any other. Tens of thousands of people came to witness the executions and spent a good amount of money at local businesses and hotels. The events lined everyone’s pockets, from the High Executioner to the pickpockets in the streets. 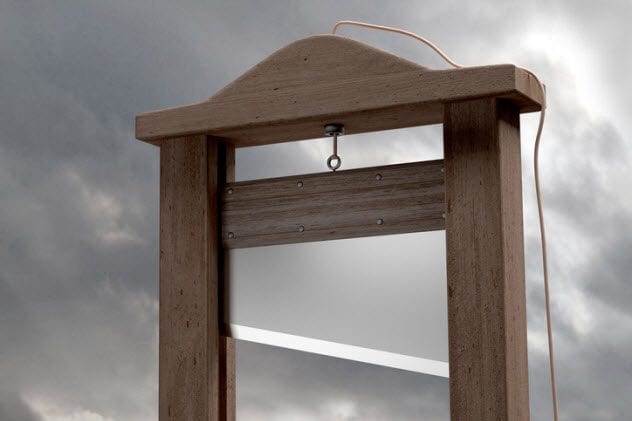 It is bad enough that you are about to be executed, but imagine how you would feel in those last moments if they totally bungled the job? That is what happened to Kenatra (also called “Konatra” in some sources) in 1905.

Granted, the man was a murderer who had killed a fellow prisoner while incarcerated. But the French president wanted to make an example of Kenatra, and he left quite a lasting impression.

The usual executioner had passed away, and a new one was in place. This new guy was obviously nervous in front of a crowd of over 1,000 people. The first drop of the blade only scalped the prisoner.

On the second drop, the blade got stuck. Then, on the third and final drop, the head was cut clean off. But it flew into the air and landed about 1 meter (3 ft) away from the body instead of neatly in the basket. The whole affair lasted 15 minutes. 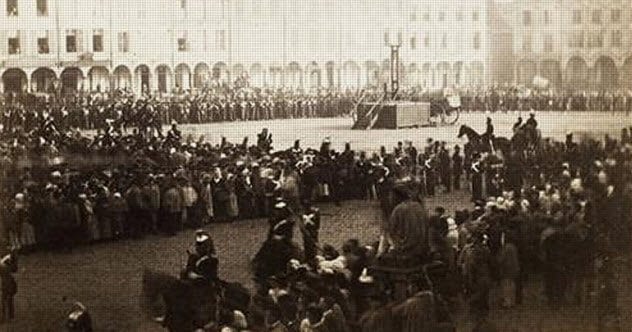 Guillotine executions were a form of entertainment for many people. According to a report from 1909, people started to pour into the square hours before an execution in Bethune, France. By midnight, there were 2,000 people waiting for the bloodshed.

Then the trains came in, carrying loads of people who wanted in on the sport. Hotels filled up, and so did the cafes as people drank to pass the time. By 4:00 AM, the appointed time of the execution, there was a crowd of some 30,000 people.

There were people in the trees. Some men brought ladders to sit on for a better view. Troops were there, holding back the crowd. No one wanted to miss out on seeing the execution of four men who were well-known bandits and murderers. 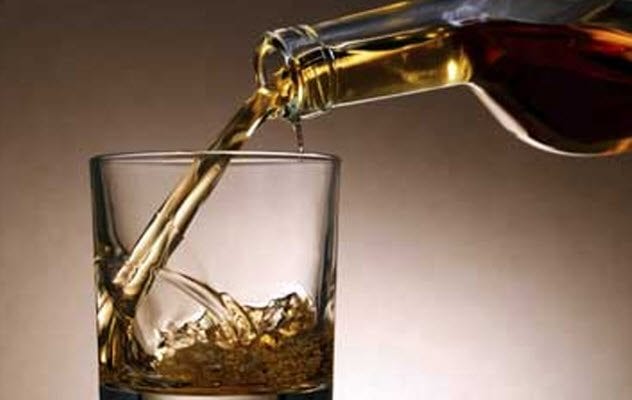 In many old accounts of guillotine executions, the prisoner does not know of the day of his execution until roughly 30 minutes before he is about to get his head lopped off. He is shaken awake and made to dress. His feet and hands are often bound at this, and he is allowed to speak to a priest and take mass.

Then he is taken to a small room, called the toilet chamber, to await the appointed moment. While waiting, the prisoner is often given brandy or wine to help steady his nerves. His hair is cut short, and his shirt collar is ripped off.

7 Off To The Turnip Field 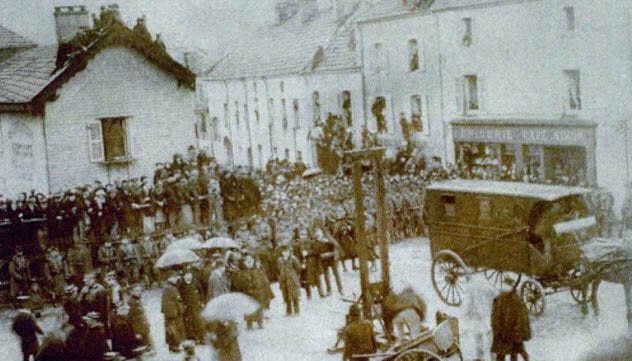 After the prisoner’s head was cut off, it landed in a basket filled with sawdust. The body was placed into a willow basket or coffin, and the head was placed between the legs. The body was then transported to the cemetery. It was given a brief funeral and buried in the “turnip field,” a section of the cemetery reserved for criminals. 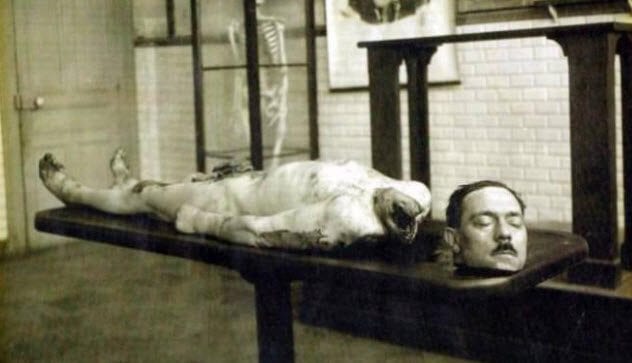 When asked if beheading was painless, Anatole Deibler, the High Executioner of France in 1907, gave an account of a gruesome experiment performed on one of the guillotined prisoners:

There was a spigot to regulate the blood torrent. When all was ready, they turned on the spigot. The dog’s blood shook the tube as it dashed in, spreading hot and alive through the whole vascular network of [the] head. The white, dead face became ruddy; its expression cleared as if awakening; the eyes opened with a look of astonishment; the lips trembled, as if trying to speak.’

5 A Question Of Pain 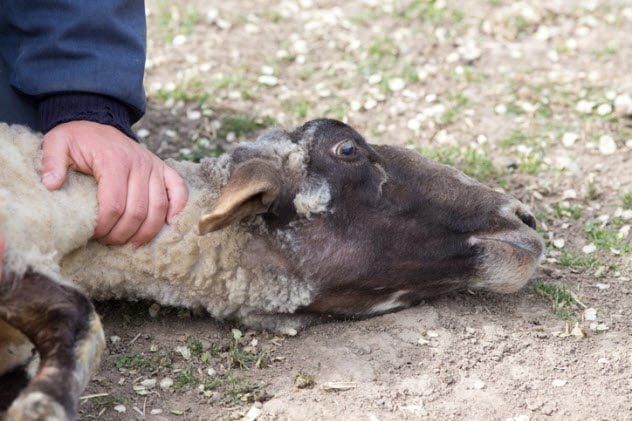 While thousands of people would gather to witness guillotine executions, there were some who questioned whether beheading was painless. In the early 1800s, experiments were done on hundreds of cows, calves, and sheep to see if the animals suffered after being beheaded.

After all the senseless bloodshed, it was concluded that animals suffer greatly after decapitation:

During the first minute after execution, the facial muscles were agitated by frightful convulsions, the mouth alternately opened and closed, the respiratory organs of the face worked, and the animal appeared to experience intense agony and an imperative desire to breathe.

4 Doctors On The Scaffold 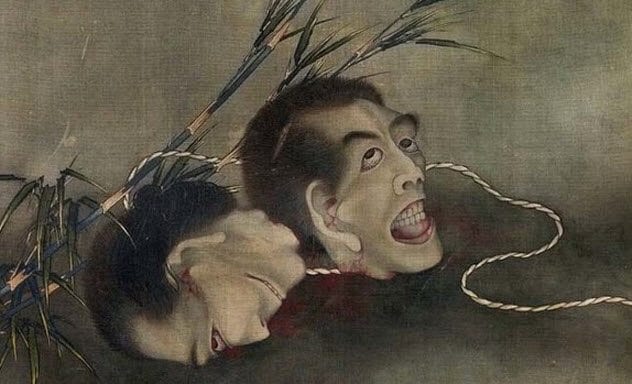 An 1862 report said that several doctors were allowed to stand on the scaffold while three prisoners were being guillotined. Their purpose was to prove that the brain remained alive after it was severed from the rest of the body.

As each head was lopped off, it was handed to a doctor. The first head, with tongue sticking out, was left alone for eight minutes before the tongue was pricked. The head reacted by drawing in the tongue and grimacing in pain.

The second head, that of a woman, had tears coming from its eyes. After 14 minutes had passed, the victim’s name was called and the eyes moved in the direction of the voice. The final head was slapped after being severed, and it reacted with a look of anger. 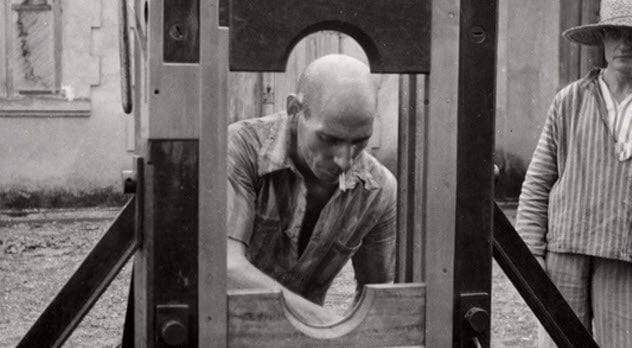 There is always that one person who has to test things out for himself, such as the medical student who believed that the yoke on the guillotine was not strong enough to hold a struggling prisoner. While he was visiting Madame Tussaud’s wax exhibit, he decided to test out the guillotine in one of the displays while no one was around.

The medical student put down the yoke and, to his surprise, proved his theory wrong. There was no way he could get out of the yoke. With the blade gleaming above him, he did not want to risk sending his own head into the basket of sawdust below his head.

A couple approached the student, and he asked for their help. But they thought it was an act and part of the display. Eventually, an attendant spotted him and released him from his plight. 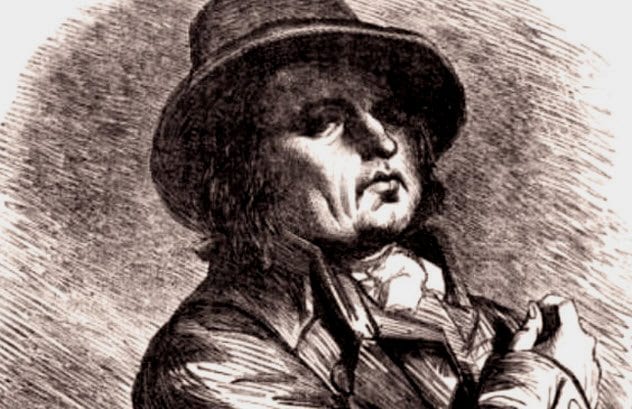 Sanson held the keys to where a guillotine was permanently erected in France. As a result, he would often receive English visitors to his home who wanted to see the guillotine up close. He would always oblige them and kept a few bales of hay around to give demonstrations.

One time, an English family brought along their three young daughters. Sanson took them to the guillotine and showed them how it worked. But the youngest daughter was not satisfied with just the demonstration. After Sanson answered her numerous, morbid questions, the girl asked to be placed into the guillotine.

He complied, but then she insisted that he tie her up like a prisoner. He did as she asked. Again, she wanted more and asked to be placed in the neck piece and planked. Sanson looked at her parents, and they replied, “As she has taken a fancy to have it done, do it.”

Sanson placed the girl in the yoke and was worried that she would ask for the blade. Fortunately, she did not. However, it is unfortunate that the article published in 1888 did not give the girl’s name so that we might learn what became of her. 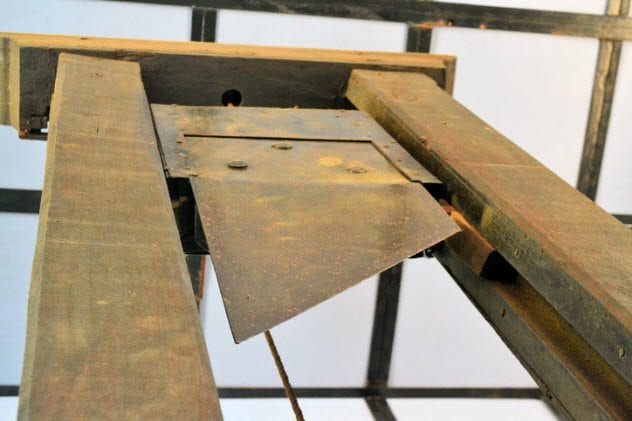 While Hamlet may have had a lot of eloquent words to say to Yorick’s skull, this particular brother had nothing nice to say.

In 1909, a man hid himself among a group of medical students and sneaked into the Lille Faculty of Medicine. There he found the head of his brother on display in the amphitheater, awaiting experimentation.

Approaching his brother’s head, he yelled, “Wretch! So this is how I find you! You have covered our whole family with dishonor!” At that point, the brother went to strike the head but collapsed to the ground with raw emotion. He had not seen his brother in four years and had only just discovered that his brother had been beheaded for committing murder.

10 Terrifying US Government Projects Carried Out On Domestic Soil