The thought of impalement probably brings to mind Vlad the Impaler or some other medieval torturer. But impalement isn’t just the stuff of textbooks or nightmares. It is a reality—and for the 10 people on this list, an especially brutal one.

Being impaled on rods, spikes, fences, or branches is a truly horrific experience. Humans are fragile beings, and there is really nothing preventing you from becoming a human shish kebab. So prepare yourself to be faced with the stomach-churning reality. 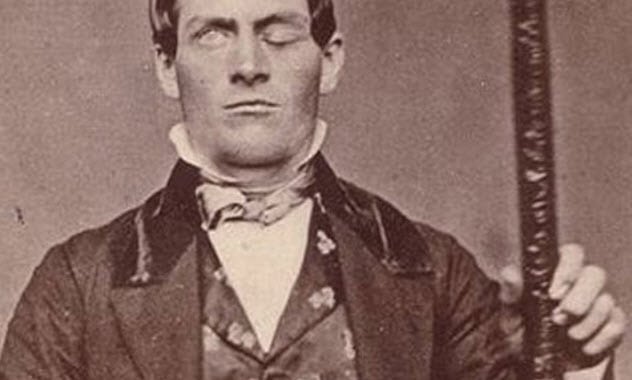 At 25 years old, Phineas Gage was working as a US railroad construction foreman when something tragic happened while making way for a new railway. He was using a tamping iron to push down explosives into a rock in which a hole had been drilled. The rod scraped against the side of the rock, causing sparks to ignite the explosives and launch the iron rod completely through Gage’s head.

After lying unconscious for several minutes, Gage awoke and was able to speak coherently. Although he survived, his personality fundamentally changed. People who had previously thought of Gage as personable and responsible came to find him crass and unpleasant. His friends and family said that he was “no longer Gage.”[1]

It’s difficult to say exactly how profound these changes were because we know little about what Gage was like before the accident. There are also differing opinions in the scientific community over how long these personality changes lasted.

The case of Phineas Gage has been studied for many years by neuroscientists trying to more fully grasp the intricacies of the brain and all its functions. Gage died 12 years after his accident. His skull and the pipe that impaled him are held at the Warren Anatomical Museum at Harvard Medical School. 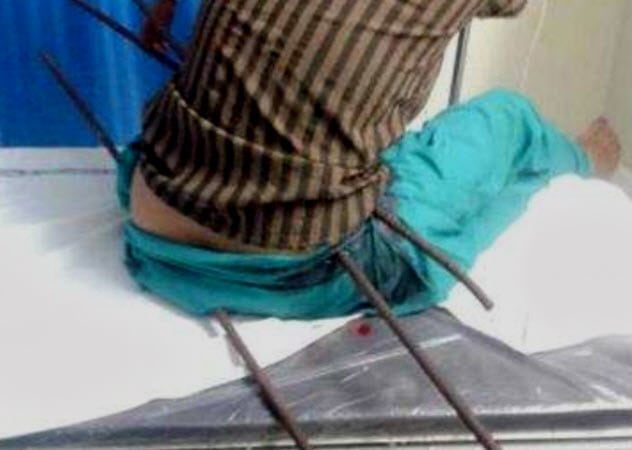 In Saran district in Bihar, a 17-year-old girl fell from a roof of a building that was under construction and landed on three iron rods attached to a cement pillar. All three rods went straight through the young woman’s lower torso and remained there for another 10–12 hours. Emergency services had to cut the bars from the building’s foundation while supporting the girl to prevent them from moving and harming her further.[2]

The girl was detached from the cement pillar and rushed to the Ruban Patliputra Hospital where she was operated on for five hours. Amazingly, the bars missed every major organ. The girl survived the surgery and spent some time in the hospital recovering.

Man impaled on lamppost after falling 50 ft from building, survives

Li Jen, a 37-year-old builder working in China, was trying to enter his apartment when he realized that he must have left his keys inside. Instead of calling a locksmith, he climbed up the side of his apartment building toward his balcony. But he slipped and fell 15 meters (50 ft).

After landing on a lamppost that pierced him through the shoulder, he was suspended in the air. Firefighters had to cut the lamppost and transport it with him to the hospital. It took three hours to remove the pole, but it somehow managed to miss all of Li Jen’s essential organs.

His injuries could have been far worse had the pole not prevented him from slamming into the concrete. Doctors said that Li Jen was likely to make a full recovery.[3] 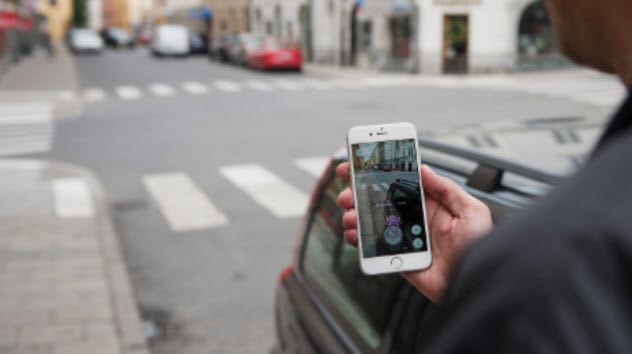 At the height of the Pokemon Go craze, an unnamed man broke into Stockholm Olympic Stadium to catch a Pokemon. The man wasn’t paying attention when he fell and was impaled through the thigh on a metal fence.

Police were called and had to hold the man in position while medical professionals gave him a morphine injection so he could be safely lifted off the fence. It was several meters high, so this was no easy task.

The man was then taken to the local hospital. “We had to lift him off, and the medical team took over and drove him to hospital. It’s a few meters high. High enough that you have to climb anyway,” said Goran Norman, an emergency control room officer.[4] 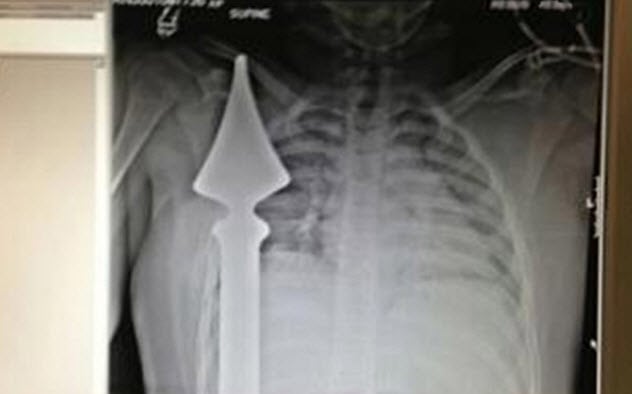 Twelve-year-old Josh Hassan was impaled through the chest when he leaned over a fence to look for his football. His mother heard Josh screaming and rushed to his aid. She and two other people held him in place so that the fence spike didn’t do any more damage.

After a fire department crew cut the railing away from the rest of the fence, Josh was rushed to the hospital and operated on. The doctors told the family that the spike had missed his heart by less than 8 centimeters (3 in).

“The spike went through my jacket and through me, and I was hanging. I looked down and saw the skin flapping. I shouted for my neighbor, and he came and held me up so the injury did not get worse,” the boy said. Josh was released after spending two days in the hospital. He decided to keep the spike as a souvenir.[5] 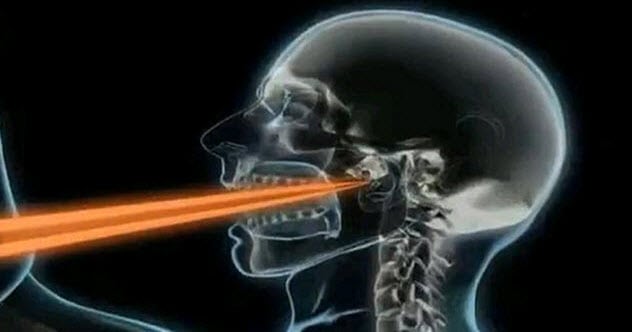 Stephen Schultz, an American man visiting Panama, was fishing with his family and fighting to capture a monster fish for 25 minutes when the creature jumped onto the boat and impaled Stephen through the face. It was a 270-kilogram (600 lb) marlin, and the snout of the beast pierced Stephen through the cheek and nasal cavity.

He later said: “[The fish] jumped once, facing away from the boat and turned around in midair; he was about [5 meters (15 ft)] away; went back into the water, made one more jump toward the back of the boat and his bill struck me on the left side of the face and knocked me onto the ground.”[6]

Stephen was rushed to the hospital and managed to escape the incident with only minor injuries and, surprisingly, no scars. The entire event was captured on video by Stephen’s sister, who said: “I wasn’t too sure what happens when you go deep-sea fishing. I wasn’t sure if they were supposed to be that close. So I was like, I’ll get this on film. Then it was in the boat. Before I could react, it was already at us. So I just kept rolling.”

After impaling Stephen, the marlin escaped back into the sea. 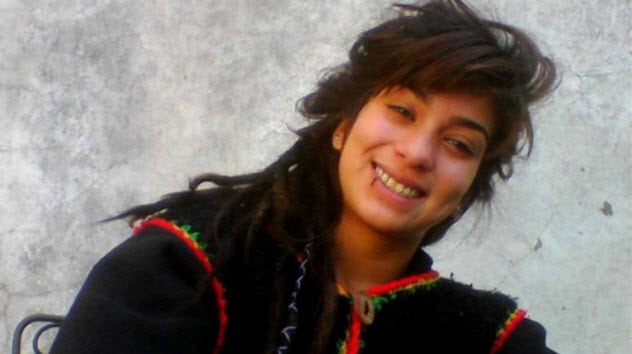 Sixteen-year-old Lucia Perez had just finished school when she was abducted by a gang. Then she was drugged, raped, and viciously assaulted before being impaled. Her attackers washed her and put her clothes back on before dropping her off at a drug rehabilitation clinic. She later died of her injuries.[7]

The Argentinian community was devastated by Lucia’s death as was her heartbroken family. A group of people organized a sit-in and women wore black to protest the high rate of murders of women in the country. Two men were arrested in connection with Lucia’s murder and rape, but a third man was also thought to be involved with covering up the crime. He was also held by police. 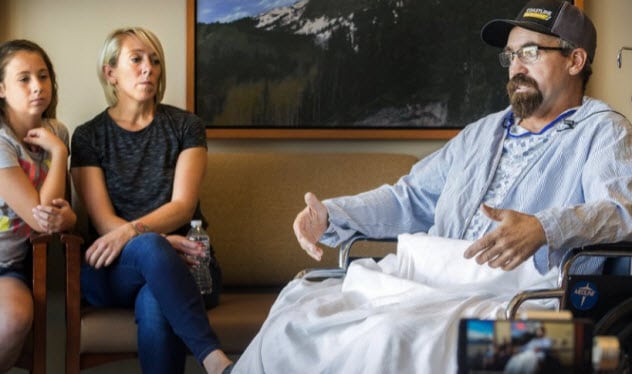 In Idaho, Justin Firth was working normally, setting up a fence, when he suddenly saw a flash and felt a pressure in his back. He looked down and saw a spike sticking out of his stomach. Justin had been impaled.

His coworkers started screaming and immediately called 911. Justin didn’t feel any pain except that pressure in his back. When the paramedics arrived, they didn’t have the proper tools to cut the spike from the front loader to which it was attached.

So his colleagues used a torch to sever the spike and industrial putty to keep Justin from getting burned by the torch. He was taken to the hospital by an air ambulance and spent three-and-a-half hours in surgery.

The spike had missed Justin’s bladder, kidneys, and spine by only a few centimeters. The trauma doctor said, “It’s one of the best things I’ve ever seen because it was a potentially catastrophic injury that’s going to have a really great outcome.”[8] 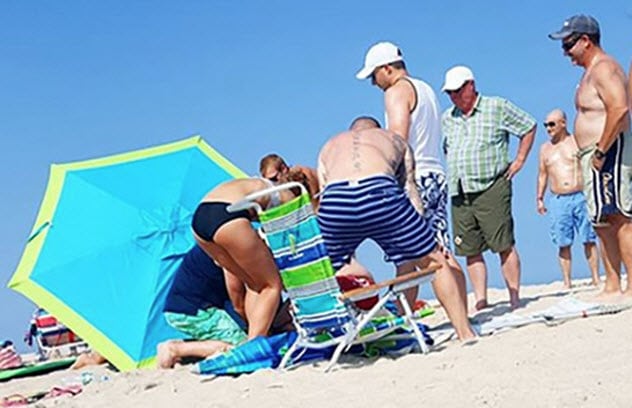 Margaret Reynolds, a 67-year-old British woman, was visiting a New Jersey beach while on vacation. Unfortunately, a gust of wind blew an umbrella that impaled Margaret through the ankle. “It was a beautiful day, and a gust of wind blew the umbrella,” Reynolds said. “It was just an accident.”[9]

As soon as it happened, bystanders heard her scream, “My leg!” A bolt cutter was used to free her, and part of the umbrella had to be cut off. Her friend held Margaret’s hand the entire time. She was then escorted to a hospital. She had surgery to remove the bit of umbrella in her ankle, and according to authorities, she was doing very well. 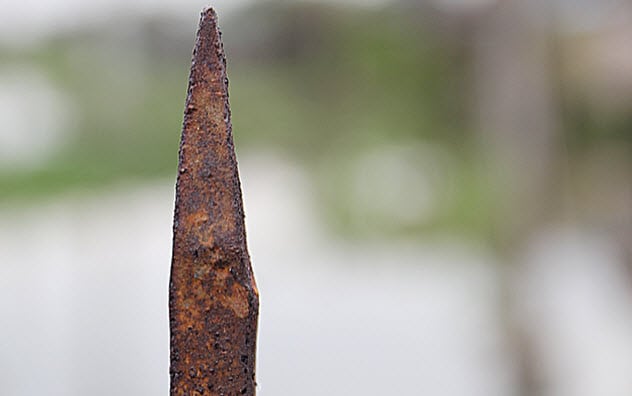 In Brooklyn, New York, 29-year-old Sean Rontrea was impaled when he fell five stories from his apartment building. He landed on a spiked fence that pierced his chest. The scene was apparently quite gruesome, with copious amounts of blood everywhere.

While dangling 1 meter (3 ft) off the ground, Sean screamed, “Get this thing out of me.” The spike was rusty and blunt and came very close to Sean’s heart and other vital organs. “It’s not every day you see a guy impaled on a fence like he was suspended in space,” said paramedic William Ritter.[10]

Sean had to be cut down using a portable saw. To avoid further damage, the paramedics used a garbage can to support his weight. Sean was rushed to the hospital with a 1.2-meter (4 ft) section of fence still attached to him. There, surgeons undertook the delicate task of removing the spike.

Read more terrifying tales of torture on 10 Fascinating Facts About The Real Dracula and 10 Horrifying Torture Devices Used At The Castle Of The Counts.