A deck of playing cards may look simple, but hidden among the pips, suits, numbers and portraits are surprising secrets, some of which are hundreds of years old.

That box of pasteboards in bold, primary colors is one of the most recognizable things in the world, but the more we look, the more it seems like those cards are filled with mystery.

Cards are special things. Each deck is a marvel of engineering, design and history, loaded with secrets that have been whispered and distorted with each retelling. Here are 10 secrets about a standard deck of playing cards that have been hiding in plain sight all this time. 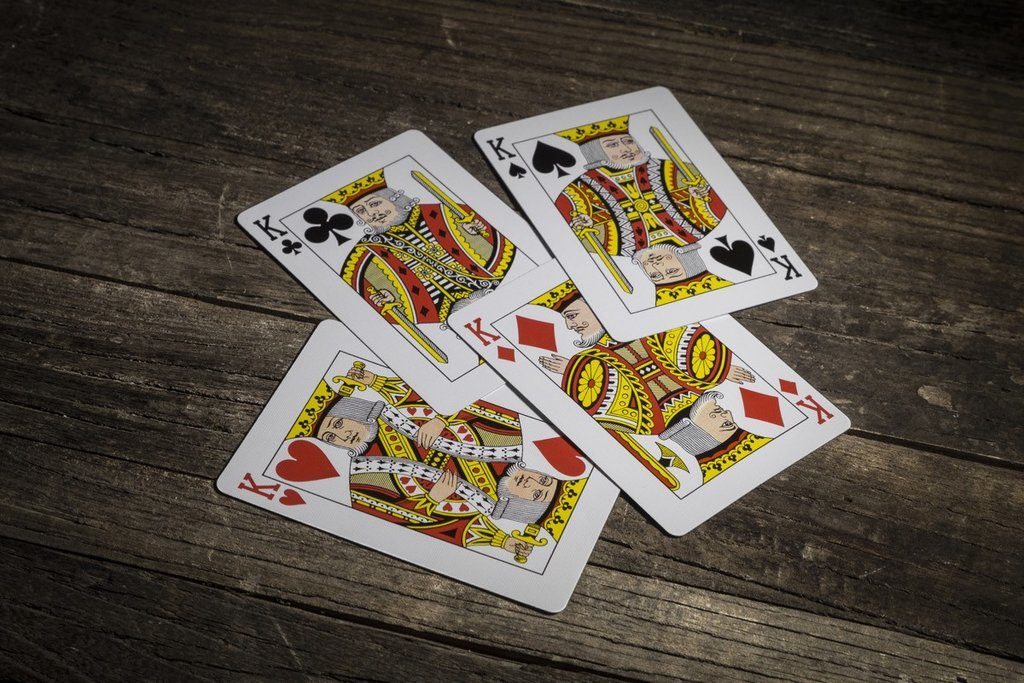 Fact: It is glue, not plastic, that makes playing cards “snap”.

Contrary to popular belief, it is glue that makes playing cards snap, not plastic. Quality playing cards are known for their feel, spring and snap. The tension and elasticity is important for the durability and feel of each card. But while cards feature a plastic coating (usually dimpled, to give a little bit of a slide), it’s layers of glue that give each card its backbone.

Each card is like an Oreo, where laminated sheets of cardboard are the cookies and glue is the cream filling. The combination provides a curiously strong, thin and pliant piece of paper perfect for a shuffle or a trick.

Bonus detail: The plastic surface on the paper does not completely enclose each card. The sheets of cardboard are laminated before the gluing process. You can spill a drop of water directly on the center for a few seconds without ruining the card, but if the water gets to the edge? Ruined. The water seeps into the card’s paper like a sponge. 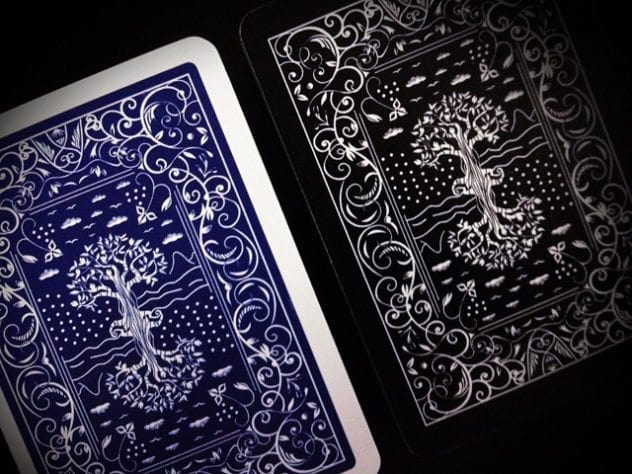 Fact: There are two major kinds of backs, and that’s a big deal to card workers, magicians and casinos

Most decks of cards feature a wide variety of back designs. But the nicer, more durable decks are a bit more simple. Usually toned with only one or two colors, they feature symmetrical designs.

There’s a key feature that magicians look for: Borders. Does a card’s back design go all the way to the edge of a card? Or is there a border? Without giving away too many tricks of the trade, both of those design options hide different things.

Those different kinds of backs also are a big deal for casino operators, who go through tremendous expense to fight against cheats and scams. The U.S. Playing Card Co. doesn’t really discuss backs much with normal customers, but if a customer has a casino, the company has plenty to advertise about what kinds of backs are better for different games. 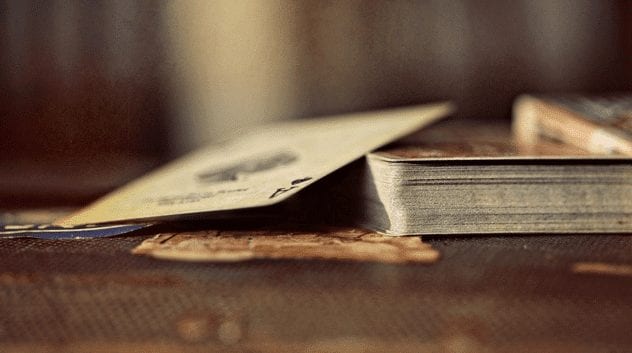 Stacks of cards are cut by very powerful cutting machines with impressively strong blades. The machine makes the same up-and-down cutting motion. That blade movement creates a beveled edge, where either the back or face is slightly larger. The direction of that bevel depends entirely on which direction the cards are facing when they are cut.

That’s a big deal for people who shuffle cards for a living—namely, magicians and sleight-of-hand artists. The knife edge helps cards weave together more easily. Decks of cards made especially for magicians will often use a traditional cut as a selling point. For instance: Magician Richard Turner, who is featured in the documentary “Dealt,” places a high value on this quality—he has a signature line of cards that feature a specific cut. 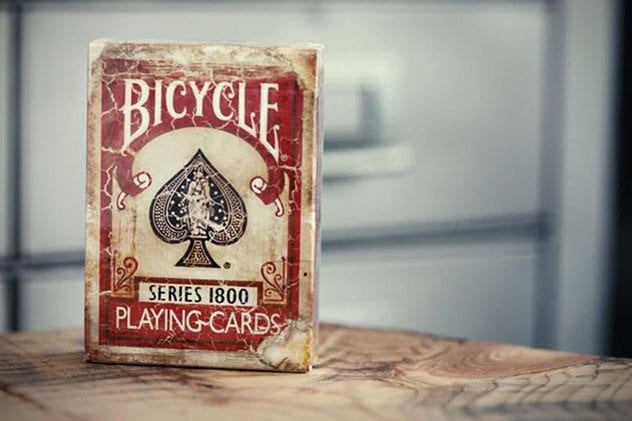 Fact: Most card brands are printed by the same Kentucky facility

A few decades ago, cards were like cars: shoppers had several “makes and models” to choose from. Brands such as Hoyle and Arco gave the U.S. Playing Card Company’s Bicycle brand a run for its money. “The Hochman Encyclopedia of American Playing Cards,” by Tom and Judy Dawson, is filled with a card collector’s dream of printers across the U.S., including the New York Consolidated Card Company, Dougherty, Russell & Morgan and more.

Over the last century, and especially over the last 20 years, the USPCC has acquired many of those card publishers. In the last decade the company, currently owned by Jarden Corporation, owns the brands of Bee, Hoyle, Maverick, Fournier, Aviator, Kem and others. The company also prints custom decks for casinos and other clients around the world.

Fact: The suits and face cards are French in origin

The origin of playing cards is up for debate. It’s thought that they originated in China as early as the ninth century.

By the 14th century, cards had spread across Europe, roughly modeled after Italian tarocchi decks (still in use as tarot cards for fortune telling). Several European countries had their own suits: Germany used hearts, leaves, bells and acorns, and Spain used coins, cups, swords and cudgels.

The French suits of spades, hearts, clubs and diamonds, however, stuck because of their geometric simplicity, solid color and ease of printing. The French are also the ones who reduced the court cards from four per suit to three. 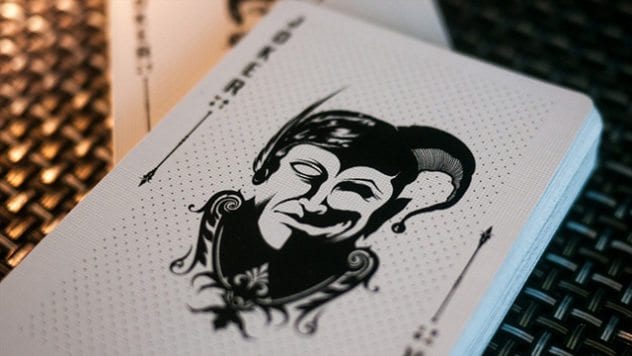 Fact: The Joker is the only card derived in America

Even though the deck’s court cards are inspired by the tarot’s, the joker is not inspired by the tarot’s Fool. Before poker became the king of card games, people in America were nuts for a trick-taking game called euchre. In the 1800s, card makers sought to assist by presenting “bower” cards, including a big and little bower.

But as poker spread up and down the Mississippi, the bowers found their way into the deck as wild cards. According to USPC history, designers twisted the German “juker” card into a joker, adding bells and floppy hats to those bike-riding bowers. The jokers have been standard features of decks ever since. 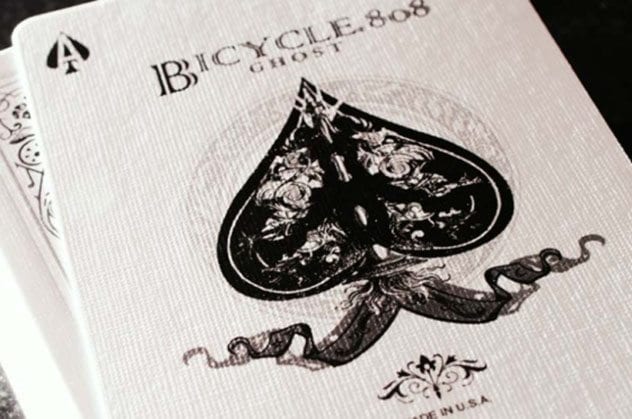 Fact: The Ace of Spades is more ornate because it used to be a tax stamp

Where the other suits’ aces are simply single pips, the Ace of Spades is boldly designed to stand out. This tradition started in 1765, according to the International Playing Card Society: That was the year England decided to start taxing playing cards sold there and in America. The ace was stamped to indicate the tax had been paid. The tax stamp was such a big deal that one man was sentenced to death for forging an ace.

In 1862 the law changed, allowing printers to design their own Aces. In “The Hochman Encyclopedia of American Playing Cards,” the Dawsons write that companies quickly used their ace as a built-in trademark affirming the brand. Several companies featured several different aces, but the USPCC bucked that trend by using one ace design for all of their decks: The current Lady Liberty that is still in use today. Modeled after Thomas Crawford’s sculpture “Statue of Freedom,” which can be found at the top of the Capitol Building in Washington, DC., the lady holds a sword and an olive branch. 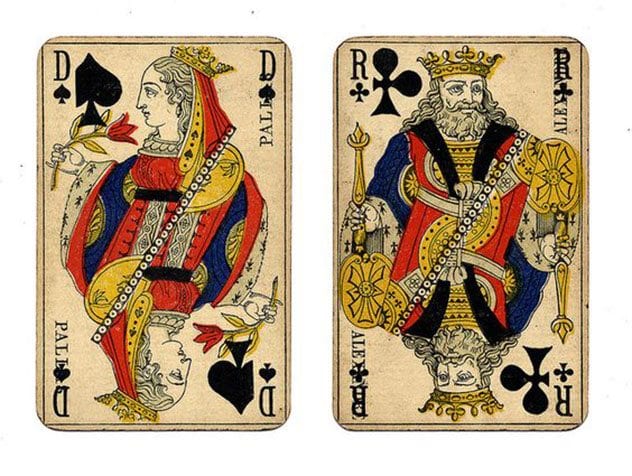 Fact: The King of Clubs is supposed to be holding an imperial orb with his other hand

The face cards are full of mysteries (what the heck is the Jack of Spades holding, anyway?) and unsettled debates, but clues to their identities can be found in most modern designs. English and French decks altered identities back and forth, but both cultures used the same four legendary kings: Charles, David, Caesar and Alexander. According to the International Playing Card Society, the French designs held names early on, and British publishers mixed them up.

The orb held by the King of Clubs is thought to be Alexander’s. Bad replications and print runs basically obscured the hand holding it. Now, the orb looks like a badge or part of the royal robes. 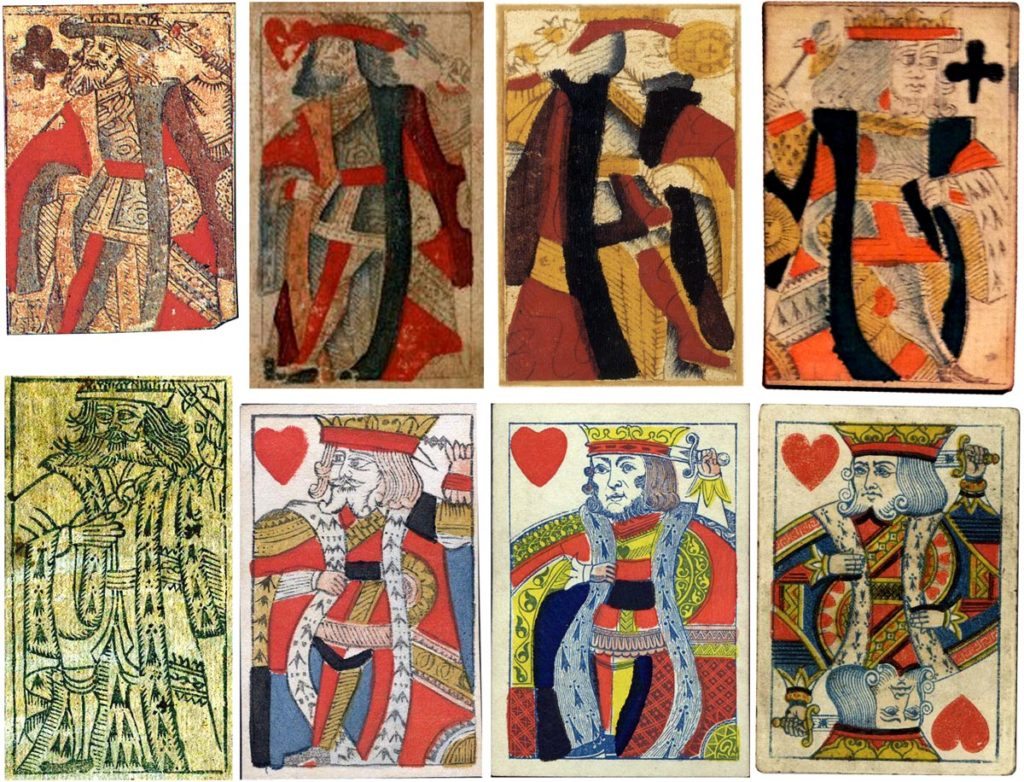 Fact: The suicide king is not committing suicide

Seriously, who commits suicide by ramming a sword in their ear? Poor Charlemagne, aka Charles (allegedly). The knife may look firmly implanted in his head, but that’s another case of bad printing.

Our modern designs come from models produced in 1565 by Pierre Marechal in Rouen, according to the IPCS. Originally, Charles was charging into action, his sword raised and ready to strike. However, a standard feature of those designs were how the crowns were drawn flush against the border. Because there wasn’t a lot of space above the head, the sword arm got smooshed down—thus giving him today’s painful portrayal. 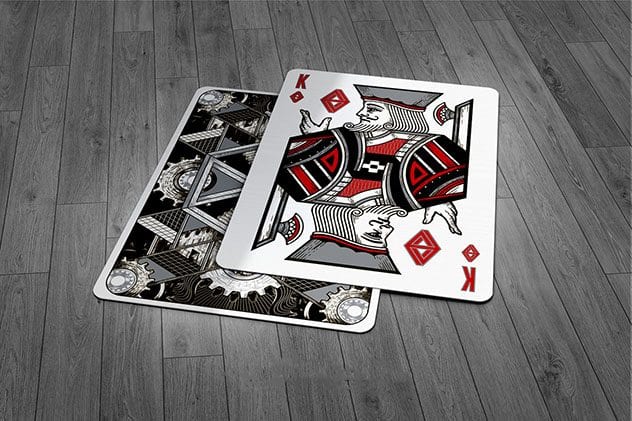 Fact: There is also a one-eyed king, and he’s not grabbing his weapon

The one-eyed jacks get all the attention. No one is paying attention to the one-eyed king. They aren’t actually one-eyed, of course—they are depicted in profile, looking squarely in their chosen direction, staring at their favorite feather or whatever that thing the Jack of Spades is holding. (Seriously: What IS that?)

An online casino said gamblers know that the king is not actually a king, but a god. In Norse mythology, Odin sacrificed his eye to learn the secret of the runes. His chosen weapon resembles Odin’s spear, and he’s not holding it like the other kings—he’s using his godly powers so that the axe is ready to strike at the twitch of a finger.

Joe Hadsall is features editor for The Joplin Globe in southwest Missouri, a writer, a magician and an avid collector and manipulator of playing cards.