Tradition holds that in the unfortunate event of a maritime disaster, the captain is the last to leave, if not going down with the ship. At what point, however, does their survival instinct defy an implicit custom that, albeit honorable, seldom ends well? The following ten captains broke from tradition, leaving not only their reputation forever tarnished, but countless passengers to fend for themselves amidst unforgiving, deadly waters. 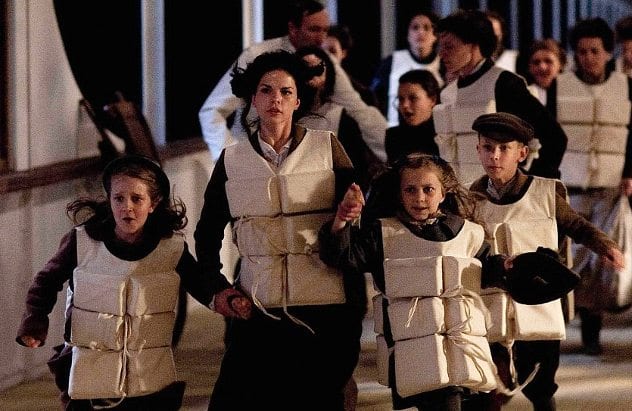 In July 1852, the HMS Birkenhead sank off the coast of South Africa killing hundreds of British soldiers from the 78th Highlanders regiment. After colliding with an underwater obstruction, the men aboard saw to it that all women and children were the first to be placed into the three lifeboats available. Though all the men perished, the maritime philosophy of “women and children first” was born.

Sadly for the passengers aboard the SS Jeddah, their captain, Joseph Clark, did not abide by the noble “Birkenhead Drill.” After encountering unremitting, turbulent weather, Capt. Clark and his crew left nearly 1,000 passengers to fend for themselves aboard the doomed vessel. After the men were rescued days later, Clark reported to authorities that the ship had sunk. Unbeknownst to Clark, the Jeddah remained afloat and was ultimately towed to port by another vessel.

Clark was subsequently brought to trial, where he was found guilty of gross misconduct that caused the deaths of 21 people. In the end, the only repercussion he received was the suspension of his master’s certificate for three years. 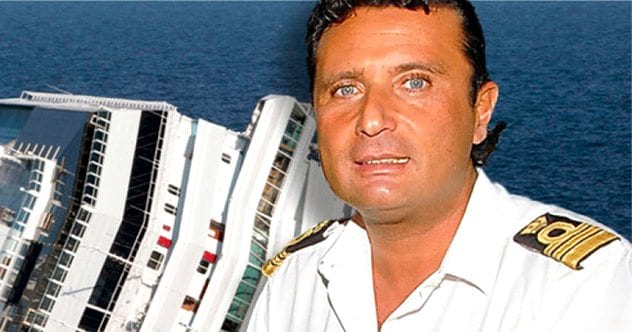 Dubbed “Captain Coward” by international media, Francesco Schettino argued that he was nothing more than a “solitary scapegoat” for a cruise ship disaster that claimed the lives of 32 people. Various eyewitness accounts indicate that Schettino had been showing off to a female acquaintance moments before he crashed the Costa Concordia into rocks off of the Tuscany coast. Immediately following the collision, the vessel began to flood. Like a true gentleman, Schettino chose to abandon the ship, leaving the majority of his crew and passengers on board.

Schettino argued that faulty electricity throughout the ship was the main culprit of the accident, which led to elevators becoming stuck and people falling into dark holes due to weak lighting. Nonetheless, he was referred to as an “idiot” by prosecutors who scolded the former captain for his cowardly actions aboard the cruise liner. After a tumultuous 19-month trial, Schettino was found guilty of manslaughter and sentenced to 16 years in prison, plus court fees. 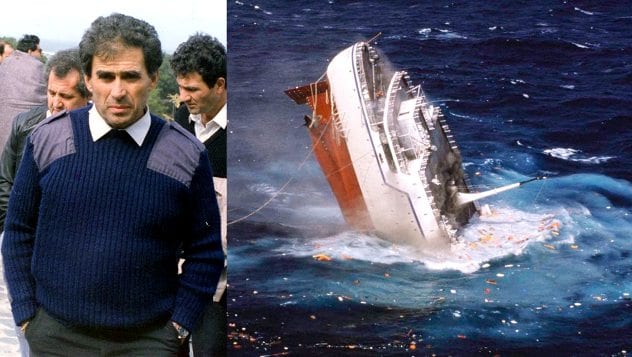 “When I order abandon ship, it doesn’t matter what time I leave. Abandon is for everybody. If some people like to stay, they can stay.” Such callous words were spoken by Yiannis Avranas, captain of the Greek luxury liner Oceanos, which sank off the coast of South Africa in 1991. Avranas was charged with misconduct after it was discovered that he and numerous crew members left the ship while the passengers remained behind. Given that the officers of the vessel had all fled in the few lifeboats available, the ship’s hired entertainment took over rescue efforts.

In one of the biggest operations ever conducted off South Africa’s “Wild Coast,” all passengers and crew were rescued. Despite this, passengers were furious with the fact that Avranas had left the ill-fated ship “far earlier than everybody else,” leaving their lives in the hands of singers, comedians, and cooks. In addition, Avranas was said to have taken unnecessary risks by sailing the old cruise ship into a major storm. Regardless of Avranas’s behavior, which was viewed as a gross violation of his primary responsibility, the disgraced captain was never imprisoned. 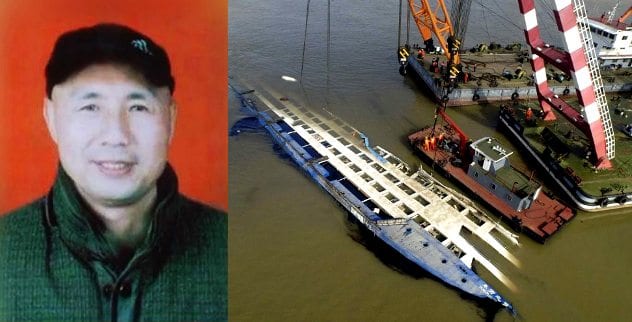 In one of China’s most horrendous maritime disasters, only 14 people survived of the 456 passengers aboard the Eastern Oriental Star. The rescue mission for the capsized ship on the Yangtze River soon became a search and recover for those who had perished.

The majority of the passengers consisted of the elderly who belonged to a travel tour group, in addition to families with small children. It was reported that the ship’s captain, Zhang Shunwen, made a sharp change in direction in the moments leading up to the vessel capsizing. Two hours after the fact, Captain Shunwen was pulled alive from the river and immediately taken into custody.

Investigators questioned the captain as to why he chose to sail his ship into an oncoming storm, as opposed to anchoring for safe measure. The ship’s integrity was also scrutinized, having been cited on previous occasions for safety violations. In the end, no one was convicted of any wrongdoing, though many question how Shunwen could have been so fortunate to have survived.

6Stranded in the Water

In 1965, the Bahama Star was sailing twelve miles behind the SS Yarmouth Castle when Captain Brown noticed smoke and fire emerging from the distant vessel. Brown ordered full steam ahead, in an attempt to rescue those stranded aboard the Yarmouth, only to find the ship’s cowardly captain, Byron Voutsinas, floating safely in a lifeboat. While helpless, abandoned passengers were jumping overboard, an enraged Brown scolded Voutsinas and ordered him back to his inflamed ship to assist in the evacuation.

Passengers left stranded in the water reported their shock in seeing their trusted captain unashamedly saving himself, a claim Voutsinas adamantly denied. In addition to the captain’s abandonment of command responsibilities, the death toll was compounded by several unnecessary errors.

Lifeboats were being launched half full, with only crew members aboard, amidst a mass of passengers helplessly pleading for life jackets. Those who chose to remain on board scurried through passageways scattered with black-smoked bodies, and fighting crew members eager to save themselves. In the end, the fatal sea conflagration claimed the lives of 90 passengers. 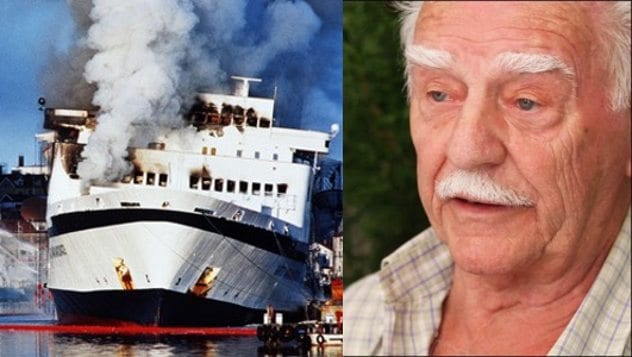 What was supposed to be a routine trip from Norway to Denmark, became one of Europe’s worst ferry disasters after an arsonist set ablaze the Scandinavian Star late one evening. As the fire raged out of control, the majority of passengers were sound asleep in their cabins unaware of their imminent doom.

Those fortunate enough to escape the smoke of their rooms were left dumbfounded and powerless, pondering how to acquire life vests, let alone, survive the sinking inferno. The poorly trained crew, many of whom could not speak a common language, only added to the confusion and panic aboard the burning vessel that contained faulty fire alarms, smoke detectors, and fire extinguishers. Only adding to the mayhem was the absence of the captain who jumped ship long before any of the passengers. When asked his reasoning for abandoning helpless women and children, Captain Hugo Larsen replied, “Did you want me to drown?”

Captain Hugo was subsequently tried by a Danish court, where he was found guilty of being responsible for inadequate security aboard the Scandinavian Star that claimed the lives of 158 passengers. Hugo was sentenced to 60 days in jail, while two of his crew, a Danish ship-owner and the shipping line director, both received 40-day sentences. 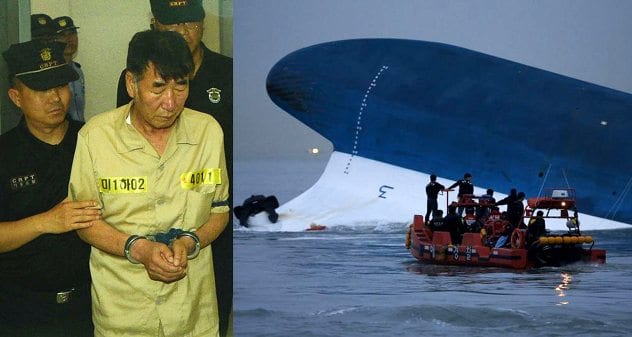 68-year-old Lee Joon-seok, the captain of a South Korean ferry that capsized, stood trial for gross negligence which claimed the lives of nearly 300 school children. Several other crew members were given sentences ranging from five to twenty years, while the ship’s chief engineer was sentenced to 30 years after being convicted of murder.

In spite of the prosecutors adamantly seeking the death penalty, Joon-seok was sentenced to 36 years in prison. However, that sentence would soon be increased to life in prison due to the Gwangju High Court adding on an additional charge of homicide. The court’s ruling could have very well been influenced by the harsh criticism made by victims’ families over a verdict they felt was too lenient. According to survivors, the victims were ordered repeatedly to remain aboard the sinking ship, all the while the captain rode away safely in a lifeboat. 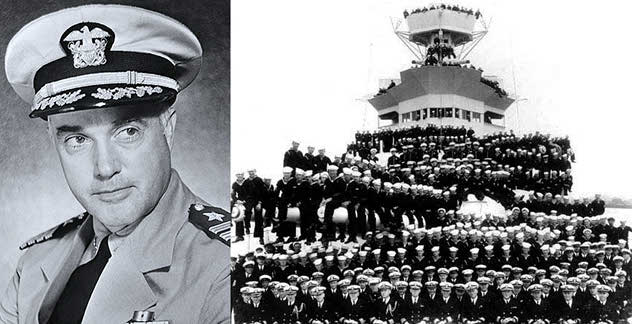 After transporting the atomic bomb that would level Hiroshima, the USS Indianapolis was hit by a Japanese torpedo on June 30, 1945. Within 12 minutes, the vessel sank leaving nearly 900 soldiers floating in the flaming oil slick of the shark infested waters. Rescue arrived four days later, at which point, only 316 men were found alive.

Following a public outcry pertaining to the vast loss of life, Captain Charles Butler McVay III was court-martialed for failure to order abandon ship in a timely manner, as well as hazarding his vessel by failure to zigzag. McVay was ultimately found guilty given that he failed to take “all necessary measures” to ensure the safety of his ship and crew, a ruling many viewed was legally correct but unjust. It was speculated that McVay’s auspicious survival led to his conviction given the fact that he did not go down with the ship. Such dishonor would follow him for the remainder of his life, one in which he chose to end with a bullet to the head in 1966. 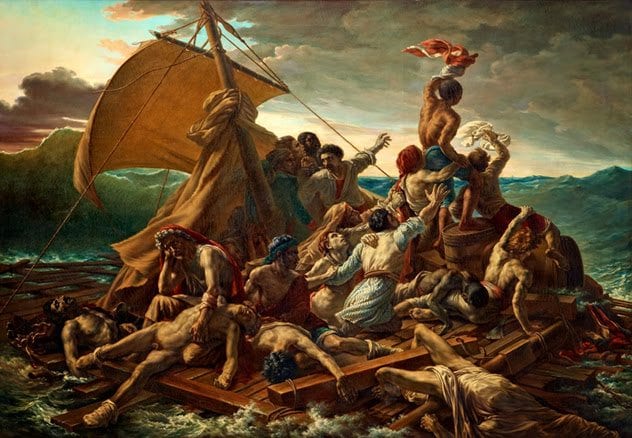 In July 1814, the French frigate Medusa was bound for Senegal with 400 people aboard when the ship suddenly crashed into a reef just off of the African coast. Soon after, the captain, along with politicians and officers, boarded the only five lifeboats aboard, leaving the remainder of the passengers no choice but to herd onto a makeshift raft. Unfortunately, the rope attaching the raft to a lifeboat was intentionally cut by an officer in what has been described as an act of “cowardly evacuation.”

Over the next 12 days, the raft floated aimlessly with distressed passengers suffering from episodes of human madness entailing murder, suicide, famine, and cannibalism. Upon their rescue by a French liner, only 15 of the original 147 raft passengers had survived. Captain Hugues Duroy de Chaumareys was brought to trial and ultimately convicted at a court-martial. Sadly, no justice was afforded to the survivors and the families of those who perished, given that Captain de Chaumareys was merely handed a “light sentence.” 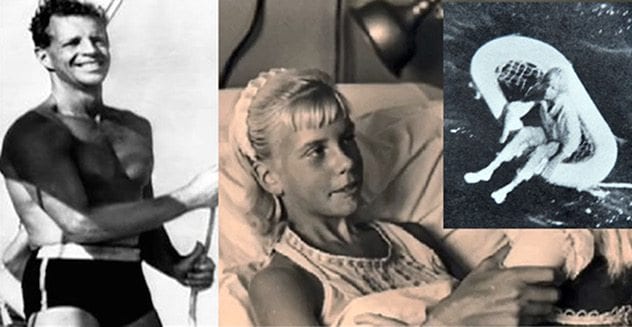 In 1961, Arthur Duperrault chartered a yacht in the Bahamas for a week-long getaway with his wife and three young children. The yacht’s captain, Julian Harvey, chose to bring his new wife along for the journey as well.

Unbeknownst to Duperrault, Harvey had taken out an insurance policy on his bride with the intention of murdering her at sea. However, his plans unraveled after she put up a fight which attracted the attention of the Duperrault family. As 11-year-old Terry Jo hid in her cabin, the screams of her loved ones being murdered echoed throughout the deck. After sinking the yacht, the ruthless captain escaped on a dinghy, only to be rescued the following morning.

Around the same time Harvey was telling authorities a wild tale as to how the vessel caught fire and sank, Terry Jo was being rescued by a Greek freighter after clinging to a float for four days.

Less than 24 hours after Terry Jo was pulled from the waters, Julian Harvey slit his arms, wrists, and throat in a Miami motel room.