Buildings are abandoned for several reasons including financial woes and environmental disasters. The shells that remain often make for beautiful pictures, even if a somewhat eerie atmosphere persists. On this list are just some of the many abandoned structures on Earth, deserted for a variety of reasons and sometimes visited by those looking for a thrill. 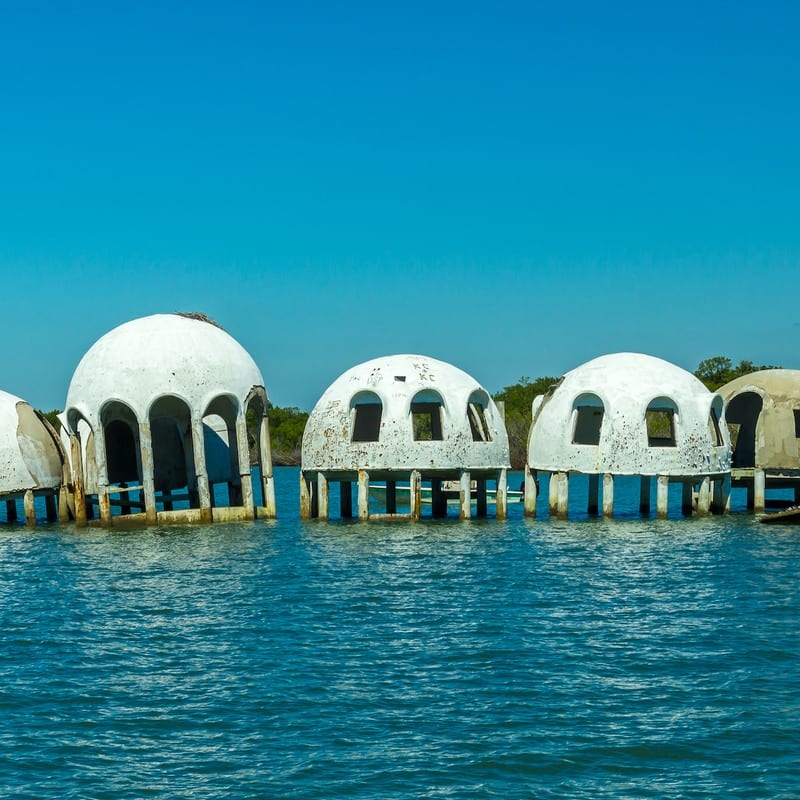 In 1980, Bill Lee started work on his dream: an eco-friendly and self-sufficient home on Cape Romano on the Gulf Coast of Florida. It took three years and a lot of hard work, but by 1982 he had built himself a home able to sustain hurricane-force winds. The house included solar panels, a well-thought-out gutter system that allowed rainfall to be used as running water inside.

The home resembles a series of futuristic-looking domes and the Lee family enjoyed it as a vacation house for a while. Rumors soon started making the rounds that the dome house was guarded by people with machine guns, among other wild stories including that the structure was built by aliens.

Lee sold the house in 1984, but where the new owners ran into financial difficulties in 1987, Lee repossessed the place and stayed there until 1993. That same year Hurricane Andrew hit Florida but the house stood strong. Erosion on Cape Romano was a big problem however, and the firm sand began to sink into the ocean water. Lee had no choice but to evacuate permanently.

Today, concrete pillars are the only support system keeping the structure above water. 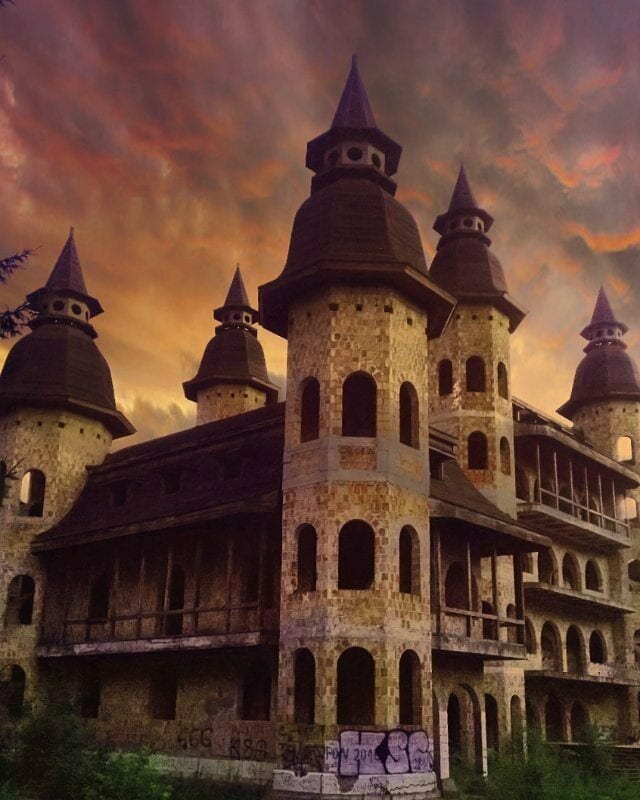 In 1979, artist Piotr Kazimierczak started work on an over-the-top studio, in the form of Lapalice Castle. He wanted the ‘studio’ to be a huge estate comprising of twelve towers and a ballroom. Unfortunately, Kazimierczak soon ran out of funds and had to leave his dream behind.

Today Lapalice Castle stands abandoned in a small Polish village, occasionally visited by the brave at heart who don’t fear its ghosts or the fragile state of its 52 rooms. Kazimierczak hasn’t given up hope though. As recently as 2017 he was still fighting against plans for the castle to be demolished, hoping that it would have some legal protection after standing for more than 20 years. 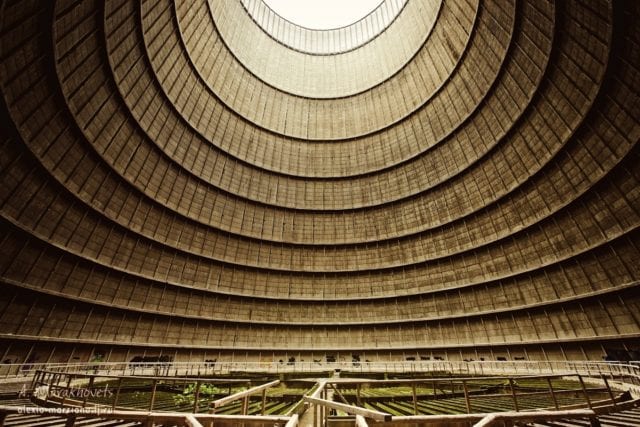 Resembling something out of an apocalypse movie, Power Plant IM sits abandoned in Charleroi, Belgium. When it was first constructed in the 1920s, it was one of the largest coal-burning power plants in the country. By 1977 it was the main source of power in Charleroi and could cool down 480,000 gallons of water per minute. New components were introduced then, which meant the power plant could also use gas power.

All was not as great as it seemed however, and when a report found that the power plant was to blame for 10% of all CO2 emissions in Belgium, it was shut down in 2007.

A decision was taken to demolish the structure soon after, but it still stands in 2021, greenery slowly but surely lining its insides. 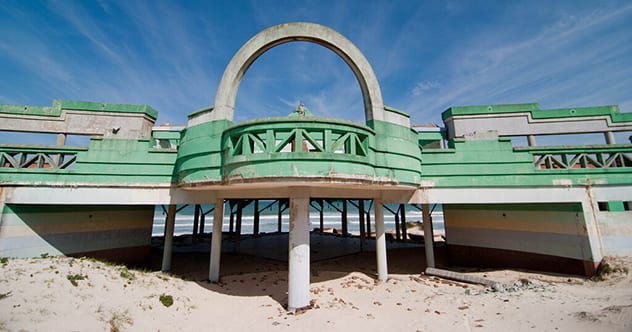 The False Bay coastline in South Africa is one of the most spectacular sights in the world and incorporates the magnificently scenic Clarence Drive. It is along this coastline you will find a sight that is out of place with the bright sunshine, blue ocean and bustling beaches. Hidden amid sand dunes in Macassar lies the Macassar Beach Pavilion, an abandoned water theme park.

The park was built in 1991 and was once a hugely popular beach resort. Financial difficulties led to the park being abandoned and the shifting sand dunes has all but claimed the structure. The park’s buildings are now filled to the brim with sand, its walls covered in graffiti and its atmosphere is almost one of despair. 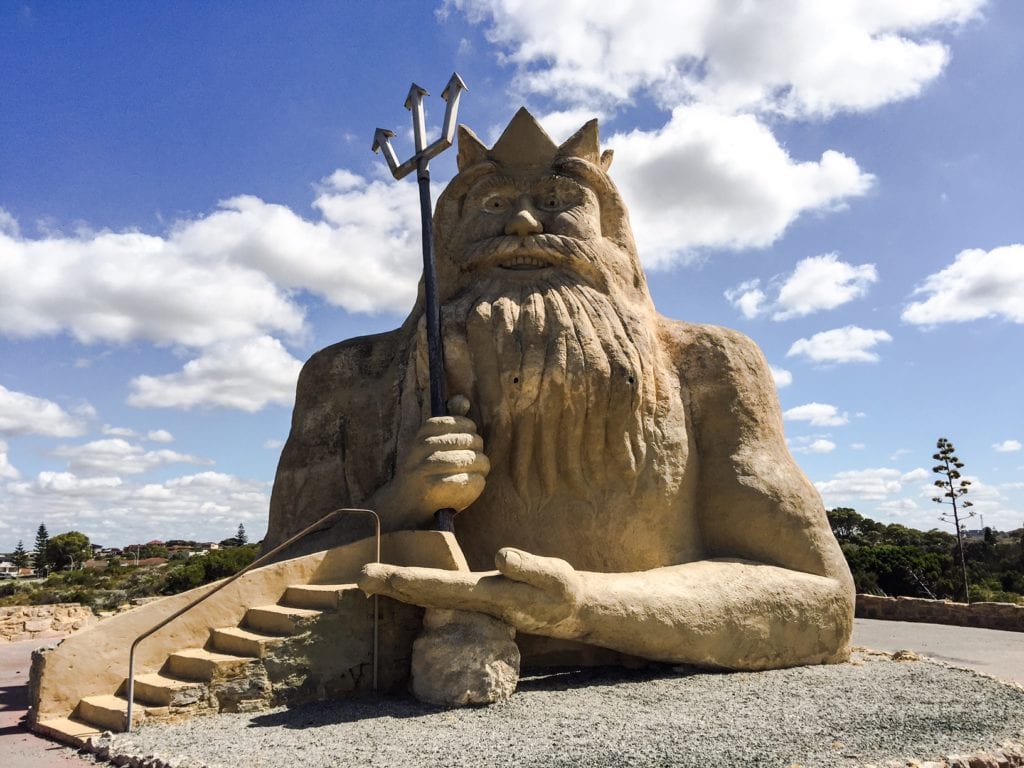 As Perth’s economy boomed, Alan Bond dreamed up a plan to built a resort that would grow tourism in Western Australia. The result of his ambition was the Atlantis Marine Park, built in 1981. It was a hit with families in particular and the park was packed with people wanting to see dolphin shows and have a swim in the pools.

Sadly, the stock market crash of ’87 put a halt to the economic boom and Atlantis closed down in 1990. Since then, the complex has been left abandoned with only old statues to greet those who still walk their dogs there. A massive statue of King Neptune was eventually restored after an online campaign by locals who also took it upon themselves to clean up the park. The statue and surrounding areas are open to the public on weekends, but during the week the shell of what used to be a busy marine park remains abandoned. 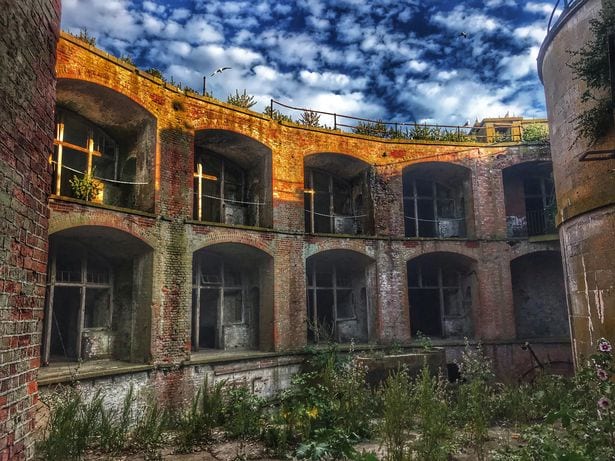 Between 1850 and 1852 at least 150 soldiers were stationed inside Stack Rock Fort in Wales, with the goal of defending the Royal Naval Dockyard against invasion. Stack Rock Fort was disarmed in 1929 and now remains perched on an island off the West Wales coastline, isolated and surrounded by a thick atmosphere of eeriness. Ghost hunters have visited the fort and claimed to have heard voices, rumbling sounds and loud bangs emanating from the structure.

It went on sale in June 2018 and is believed to have been sold for £400,000. It was sold again in 2020 to an anonymous buyer who is supposedly planning to make the location accessible to the public again. 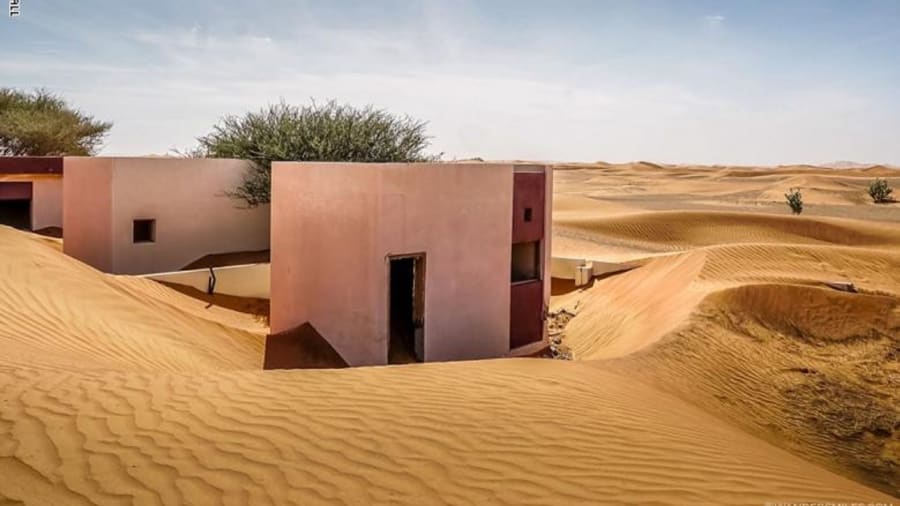 An old legend has it that a ‘jinn’ drove away the residents of a small village situated along the old Dubai-Hatta road, two kilometers away from Al Madam. The village is made up of two rows of houses with a mosque at the end and all of these buildings were so well constructed that there is hardly a crack or paint peel to be seen.

However, residents did not contend with the nature of the sand in the area which ended up invading the houses and burying their bright rooms halfway up to the ceiling. Some of the buildings have been swallowed up entirely by the sand. Surrounding the sunken houses are abandoned shops and building sites overlooked by stunning sand dunes.

What was supposed to be a dream Disney castle valley, turned into a wasted development of over 250 thousand square meters at the foot of the Mudurnu hills in Turkey.

732 castles were built here as luxury vacation homes for rich tourists. The developers went bankrupt in 2018, causing investors to quickly pull out of the deal. Now the French chateaux-style castles stand empty, some with half-finished rooms.

What’s more, the residents of Mudurnu abhor the construction project as it is not in keeping with the traditional architecture in the area including Ottoman wooden houses, Byzantine buildings and a mosque dating back 600 years. 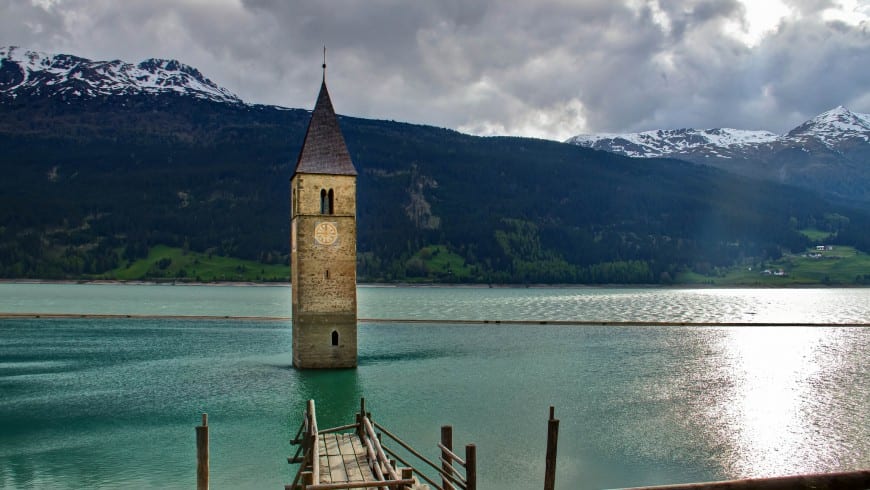 In 1950, the construction of a dam that unified 3 lakes led to the flooding of the small village of Graun. The village was completely submerged with the exception of the church bell tower that still sticks out of Reschensee or Lake Reschen. The lake lies in the western portion of South Tyrol, Italy and is near the border of Austria and Switzerland.

The bells of the church tower that remains in the lake were removed before Graun was flooded, but legend has it that when winter blankets the area in snow, the sound of church bells ring out from the lone tower. When the water of the lake freezes over, it is possible to reach the bell tower by foot. 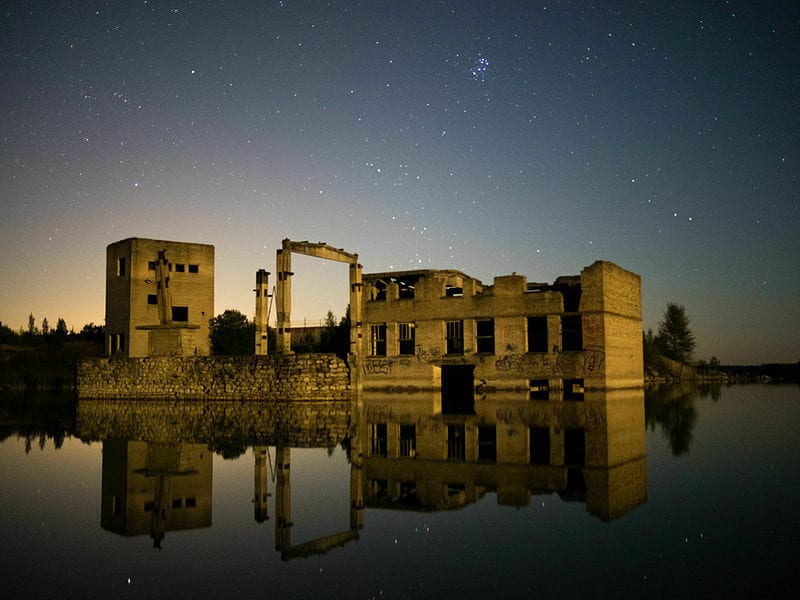 The Rummu prison in Estonia was constructed next to a limestone quarry in which its prisoners were forced to work. Estonia regained its independence in 1991, forcing the Soviets and their institutions out. The prison and the quarry were both abandoned as a result.

Soon, underground water created a new lake, submerging the mining machinery and even whole buildings. These days, only some parts of the old prison are still visible on land while others are half-submerged in lake water. For this reason, the area has become somewhat of a popular diving spot with divers curious to explore the prison structure under water. That is when on-site security guards don’t chase them off, that is.