Archaeological discoveries have found that horse racing dates way back to the civilizations of ancient times. It was an official event at the Greek Olympic Games which were held in the year 664 B.C. Its basic premise has remained largely unchanged for thousands of years. Here, we are going to take a look at the top 10 activities from around the world that involve the racing of animals against each other, but most certainly do not involve any horses. 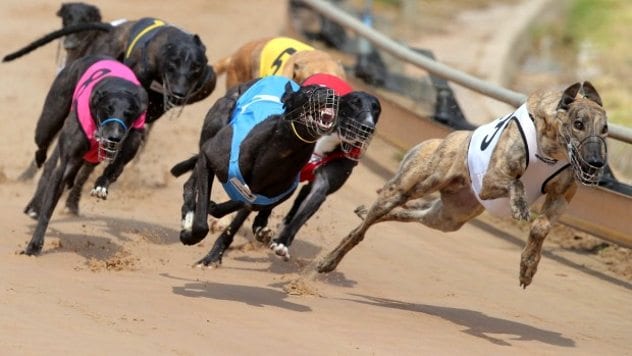 This does not involve buses being driven quickly, but instead, concerns itself with the tall, slim, and graceful breed of dog. The greyhound, which normally weighs in at between 50 to 80 pounds (22-36 kg), is the fastest dog on the planet and can achieve an eye-watering maximum speed of 45 miles per hour (70 km/h).

The organized act of greyhound racing has its origins in the coursing (hunting) of deer, hare, and foxes in the UK and Europe. It was Queen Elizabeth I of England who has been credited with inventing this in the 1500s, which is why greyhound coursing has become widely known as “The Sport of Queens.”

The sport developed into its current form thanks to Owen Patrick Smith in 1912. He wanted to see an end to what he saw as the cruelty of the killing of jackrabbits by greyhounds, and so he invented the mechanical hare as an alternative. In 1919, Smith opened the world’s first greyhound racing track along with a grandstand in Emeryville, California. 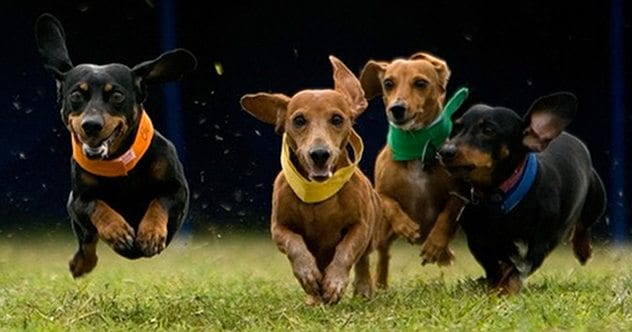 The dachshund or wiener dog was first raced for fun in Australia in the 1970s. An American beer commercial shown on television in 1993 mischievously cited wiener dog racing as a potential comedy sport, and the notion took off in a much bigger way. The dachshund’s shape and its genetic predisposition to back injuries has led to a great deal of controversy and widespread criticism of the sport, but the attendance figures mean that its popularity cannot be denied.

Every December, San Diego, California, hosts the annual Wienerschnitzel Wiener Nationals, where the dachshunds typically run over 25 or 50 yard (22 or 45 m) distances to compete for the National Dachshund Racing Championship.

The sport became immortalized in 2007 with the release of “Wiener Takes All,” a documentary or “dog-u-mentary” film which chronicles the professional careers of five of the most well-known canine competitors and their human owners over three consecutive racing seasons. 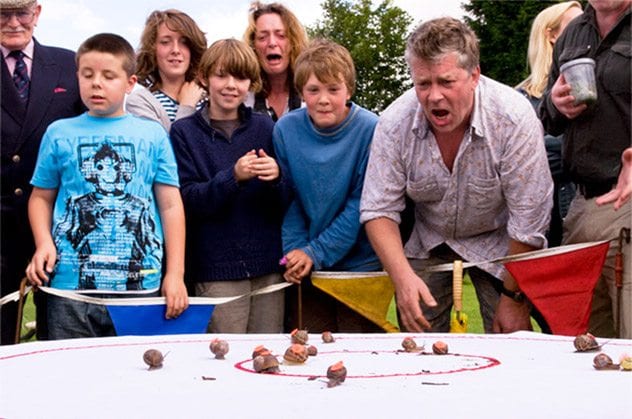 The annual World Snail Racing Championships have taken place on the cricket field at Congham in the UK county of Norfolk every July for more than 25 years, using only the native European common garden snail (helix aspersa). It has been declared that giant foreign snails are strictly forbidden from being entered into the competition.

The rules for the race are delightfully simple: as one snail can often look very much like another, each competitor must have a number painted or attached by sticker to its shell so that they can be easily identified; the entrants are then placed into the center of a circle with a radius which measures thirteen inches (33 cm), all facing towards the circle’s outer edge; the official Snail Trainer shouts, “Ready. Steady. SLOW!” and the race is underway. The winner is the first snail to reach the edge of the circle.

The current world record of exactly two minutes was set in 1995 by Archie The Snail. Before you go hunting under rocks in your garden to find the next record breaker, please be warned that this record can, and will, only be challenged at the official annual World Snail Racing Championship event. 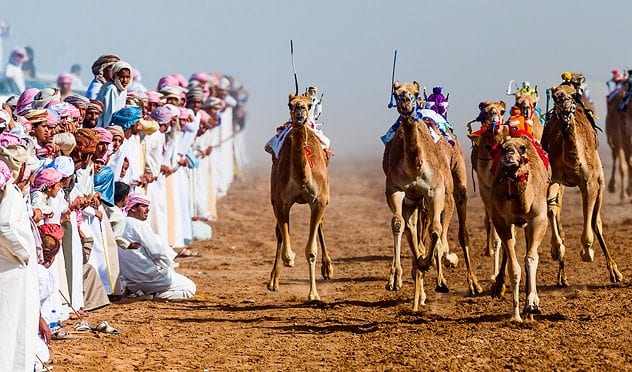 On the Arabian Peninsula, the ancient pastime of holding informal, social events which involved impromptu camel racing can be traced back as far as the seventh century. But it was not until the 1970s that camel racing became a more organized and formal sport with the formulation of governing bodies to establish official racing rules and regulations.

Camel racing is now recognized as a serious international sport and has become extremely popular in India, Egypt, Australia, and particularly in the Arab countries of the Middle East.

Some of the world’s most popular and best-known camel races, with the highest prize funds, are currently held in Australia, particularly in the state of Queensland. The “Sheikh Zayed International Camel Endurance Race” has a price purse of A$50,000 (US$37,000); also in Queensland, the annual prize purse of “The Boulia Desert Sands” totals A$25,000 (US$18,500). 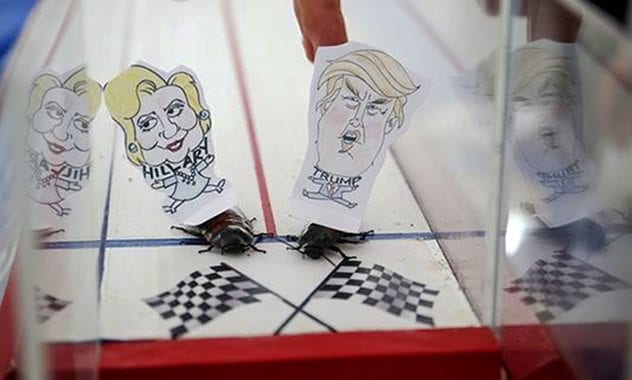 Cockroach racing was born in 1986 at the Story Bridge Hotel in Brisbane, Australia. Two old guys were sitting at the bar, arguing over who’s suburb was home to the fastest moving ‘roaches. Their argument was settled on the following day when each man brought a cockroach from their respective neighborhoods, and a race between them was then carried out in a nearby parking lot. History was made that day, and cockroach races now take place annually at the same hotel on January 26, known as “The Australia Day Cockroach Races.”

In the United States, the Pest Control Association of New Jersey holds a popular cockroach race every fourth year at its annual trade show, prior to the Presidential election. The aim of the race is to predict New Jersey’s Democrat candidate. It is said that the race has a very respectable 84 percent success rate of correctly choosing the winning election candidate. 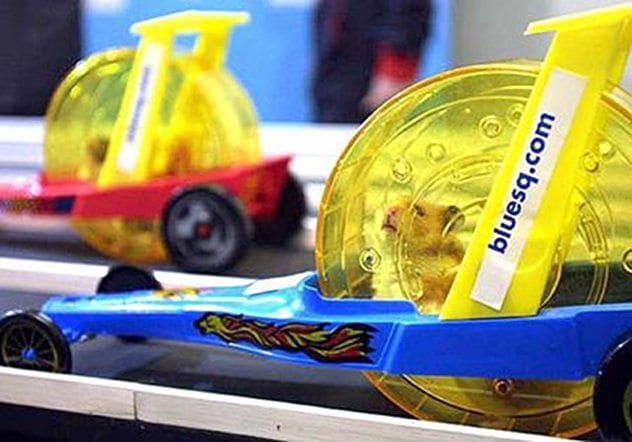 The 2001 outbreak of foot and mouth disease in the rural areas of the UK saw the government having to introduce emergency legislation which severely limited the movement of animals around different parts of the country. As a consequence, many horse racing meetings had to be canceled, as trainers were unable to transport their horses from the stables to the racecourses.

Seeing their income from sports gambling beginning to plummet in dramatic fashion, and in an attempt to reverse their fortunes, online bookmaking company Blue Square decided to take matters into their own hands. They introduced the first hamster racing series, in what was widely seen at the time as either a cynical act of mad desperation or one of creative genius.

Ed Pownall from Blue Square Bookmakers released a statement which perfectly and briefly summed up the arrangements for the races, “We’ve been running hamsters in these little dragsters . . . you put an exercise wheel in the middle of a 10-inch-long dragster . . . as they run in the wheel it moves the thing forward . . . it’s just been fun for people, to get them through the day without the horse racing . . . the rodents run six at once along a 30-foot track . . . so far, the fastest time is 38 seconds. On Friday, the winners of each of the week’s four races will face one another in a tournament showdown.” 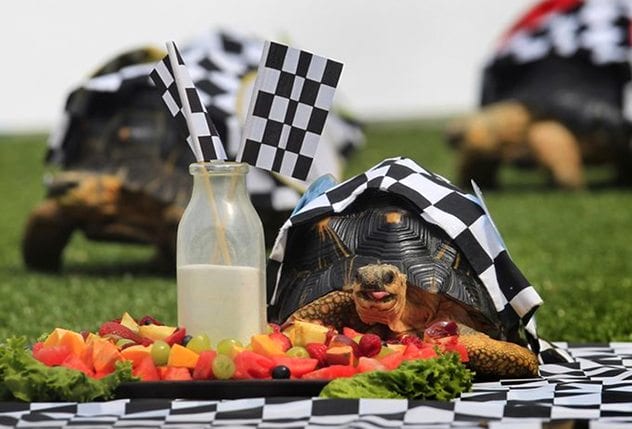 Turtle racing began in the United States in 1902 when seven turtles in Chicago were jockeyed across a garden, being ridden by young children. The Chicago Tribune at the time understandably labeled it as “The strangest race ever run.” The main street at Longville, Minnesota has been the venue for races since the 1950s, leading to the state legislature honoring the town as “the turtle racing capital of the world.”

Overly enthusiastic turtle racers have been known to resort to ever drastic measures in their attempts to hasten the speed of the turtles by introducing electric currents to the creature’s brains. Animal rights charities have widely spoken out against turtle racing. PETA (People for the Ethical Treatment of Animals) has been the most vocal in its condemnation against numerous turtle races held in Canada and has even suggested the racing of rubber ducks as a preferred alternative. 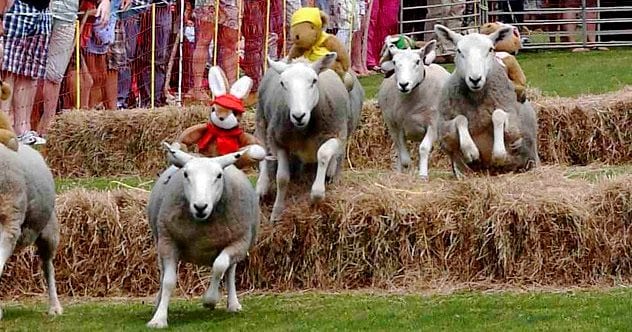 Australia is a country renowned for its sheep farming, and it is almost inevitable that the country hosts one of the world’s most widely known sheep racing events. The annual Booligal Sheep Races now take place every October in New South Wales, and the weekend-long event has so far raised more than A$150,000 (US$112,000) which has been donated to various charities over the last 19 years.

Another annual event in the sheep racing calendar is the Sheep Grand National. Held every year over a 220-yard (200-meter) horseshoe-shaped course at Hoo Farm, Telford in the county of Shropshire in the UK, the sixteen competitors each wear a knitted coat on their backs and jump over a set of hurdles towards a food trough to tempt them to the finish line. 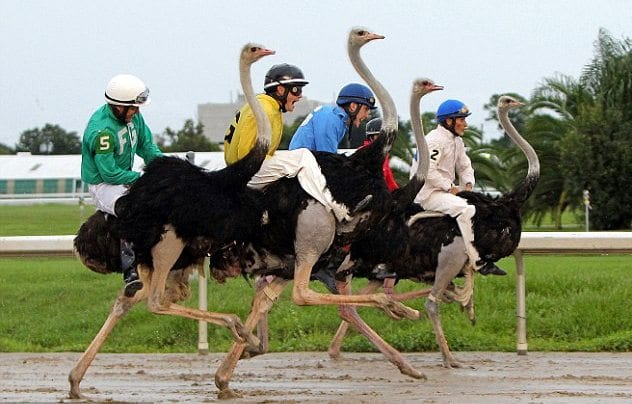 The seven to nine feet (2.1-2.8 m) tall, flightless ostrich is the world’s largest bird. As the fastest birds on land, they are incredibly strong runners, reaching up to 43 miles per hour (69 km/h) in a sprint and holding a constant speed of 31 miles per hour (50 km/h) over distances, a single stride measures 10 to 16 feet (three to five meters).

While quite common in parts of South Africa, ostrich races are also held at a number of venues throughout the United States where the birds are ridden like horses, using saddles and reins. The Ostrich Farm in Jacksonville, Florida, has held competitions since it opened as a tourist attraction in 1892, and the annual Ostrich Festival takes place in Chandler, Arizona. Similar events are also regularly held in the states of Iowa, Nevada, and Kentucky. 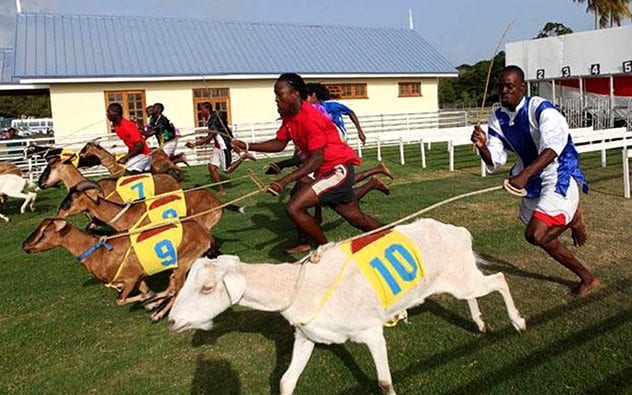 Goat racing originated on the Caribbean island of Tobago in 1925. Held every Easter Monday, horse racing was, at the time, considered to be an activity that was reserved for the local gentry. Samuel Callender began holding a goat race in the village of Buccoo on the following day as a poor man’s equivalent to the horse races. This day became known as “Easter Tuesday” and is now an unofficial public holiday on the island.

Drawing thousands of spectators every year, the Buccoo Goat Race Festival is the world’s longest running goat racing event. It is currently sponsored by the Tobago House of Assembly’s Department of Tourism. Originally held on the village streets, it now takes place at the $100 million racing arena and stables, known as the Buccoo Integrated Facility.

The training regime for the goats lasts at least two months. They are taught to walk at gradually increasing speeds until they can run in front of their trainer with a rope around their neck, as they do on race day. Given the correct care and attention, a professional racing goat can live for as long as thirteen years.